“Phantoms of Asia: Contemporary Art Awakens the Past”

Hosting one of the finest collections of Asian antiquities anywhere in country, the Asian Art Museum has always relied on the strength of its collections in classical Chinese, Japanese, Korean, Persian, Tibetan, South and Southeast Asian artifacts. The Museum shifts course in this first major exhibition of contemporary art initiated by the Museum since the institution opened at the Civic Center location in March 2003. Over thirty contemporary artists from fifteen countries populate three floors of the Museum, mixing newly commissioned and studio works, installation, video, and social practice with corresponding artifacts taken from the Museum’s foundation collection.

What makes the exhibition important, aside from the pleasure and intellectual rigor of the viewing experience, is the Museum’s willingness to highlight contemporary Asian artists, long denied local institutional due. Inclusion within sacrosanct galleries afford artists increased credibility in the greater art world. In turn, the Museum receives the increased energy and vision of a new cliental. It’s a win-win situation undertaken under the leadership of newly appointed Director, Jay Xu, who begins steering his institution toward a bright future with this exhibition.

Curated by Mami Kataoka, Chief Curator of Tokyo’s Mori Art Museum, in collaboration with Allison Harding, Assistant Curator of Contemporary Art, Asian Art Museum, the two ranged across the breath of Asia for ideas and works to inaugurate the Asian Museum’s first contemporary exhibition. In doing so, they have manifested one of the prime objectives of the exhibition – to embrace, “the imaginative powers that have enabled people since ancient times to understand phenomena beyond human control…Accessing these powers involves the inheritance not only of established forms and subject matter but also of a sensitivity toward invisible forces.”

Co-curator Allison Harding echoes Mami Kataoka’s written remarks, similarly emphasizing the bond between the contemporary and traditional works on display, “They [the artists in the exhibition] assume that both contemporary and traditional art come from a universal drive to understand and depict parts of the world that are not fully within our grasp.”

This is expressed before the exhibition visitor enters the Museum. Choi Jeng Hwa’s, “Breathing Flower,” uses one of the most common images of Asian cosmology to engage the casual viewer on the Plaza opposite the Museum. Made from common castoff materials, the inflatable fabric of the lotus opens and closes, symbolizing, “the spiritual path a person takes through life toward enlightenment.”

The phantom flow of energy attains visibility within the Museum’s North Court, where Korean artist Sun K. Kwak’s has transformed the space with a dynamic drawing installation in masking tape and vinyl. According to the work’s description, the artist has used the space, “to detect the subtle energies in the room, and serves to sift the visitors’ consciousness from the mundane concerns of daily life to the spiritual/cosmological…”

The drawing was installed with the help of Museum staff, and this participatory action, carries over to other works in the exhibition, most notably that of Japanese artist Takayuki Yamamoto, who has engaged with elementary school children from San Francisco’s Bayview district in the creation of dioramas representing their ideas of heaven and hell.

In addition to social practice between artist and public, collaboration figures in the work of participating artists in the exhibition, including Yosihiro Suda, who has carved delicate plant life, from flowers to weeds, and secreted them in the installations of fellow exhibitors. The artist states that, “Even though the scale of my work is small, if people find them, they can change people’s feelings…If you can take an interest in even the small things, it can change the atmosphere and the feeling of your surroundings. It makes you feel different from before.”

“Changing people’s feelings,” is what Hong Kong artist Adrian Wong, set out to explore when he polled a number of Bay Area feng shui experts while researching his installation, which presents two rooms – one organized within positive feng shui practice, the other displaying negative forces at play. You can feel the difference. He writes in the exhibition’s informative catalog that, “I came to see feng shui as a concretization of metaphor, a beautifully crafted structure within which adherents are given a means to reflect on the inherent harmonies and disharmonies of their surroundings.” 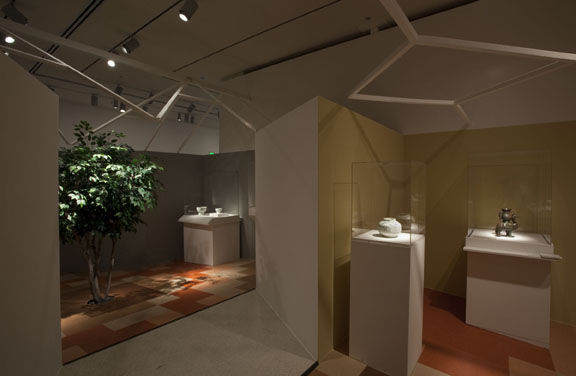 Singapore artist Heman Chong deals with these harmonies and disharmonies in the “dystopian stillness” of his “Calendars (2020-2096),” an installation of 1001 calendar pages, each portraying an absence of people in architectural space, contrasting with the normal bustle of humanity in the crowded city-state. The artist also contributes, “Star (Burst),” adhering three thousand stickers to the gallery wall in a performative action “balancing order and chaos” in a pattern both new and drawing on the ancient image of the mandala. Based on the artist’s previous work, the museum administrators allowed the artist a free hand in the gallery, the work’s success or failure unseen until the final outcome. This institutional trust bodes well for the presentation of future contemporary art, mirroring the participating artists trust in the past to inform the present. 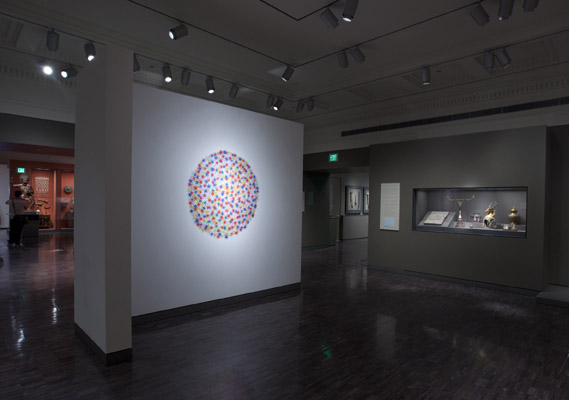 Speaking of mirrors and mandalas, the exhibition’s singular image, used on posters to represent the exhibition, is an anonymous portrait of a person randomly selected by Poklong Anading, a Filipino “street” photographer. Asked to hold a mirror in front of his or her face, the reflecting glow of the camera flash, creates a mandala of invisible energy in saturated light. Anading’s work captures a host of contemporary concerns including social practice, identity, chance and conceptual tenacity.

Any number of artists could be singled out, all of which have had, or are quite capable of generating, meaningful solo exhibitions. But some that stand out are Adeela Suleman, a female Pakistani art professor and metalworker shaping stainless steel reliefs into figures of the everyday – from banana trees and peacocks to suicide vests and missiles. Indian artist Raqib Shaw, already owns an impressive exhibition record, ranging from the Metropolitan Museum in New York to the Institute of Contemporary Art in London. His jewel-like enameled creations are fantastical depictions of humanity’s lusts and loves straight out of Milton and Bosch. Their artistry alone makes the show worthwhile.

If I was forced to pick just one other artist to highlight, I guess Aki Kondo is as good as any. She sticks in my mind. I was shocked when curator Harding told me she was but a recent Japanese art school graduate. Her large oil work painted last year, “Mountain Gods,” a reaction to the devastating tsunami and surrounding mountains, a spirit realm saving many from destruction. Though young, she seems to have incorporated lessons from the Abstract Expressionists and a host of other painting schools into something uniquely her own.

The exhibition extends its audience reach and intellectual rigor through catalog essays by Director Jay Xu, co-curators Mami Kataoka , Allison Harding and others, introducing the four  thematic structures of the exhibition: “Envisioning the Invisible,” “Living Beyond Living,” “Communing with Deities” and “Encountering the Gods.” Color plates of contemporary works and relating artifacts from the Museum’s permanent collection are superbly reproduced. The illustration of the artists’ works are accompanied by essays, statements, and interviews.

The exhibition is complimented by an extensive public programming effort, which continues well into September. New York Times art critic, Holland Carter, has already come and gone reflecting on his experiences with Asian Art. In another earlier session, Co-curator Mami Kataila conversed with noted photographer Hiroshi Sugimoto, who presents a jewel like installation in the exhibition, incorporating an ongoing investigation of seascapes. Other conversations  with artists yet to be conducted include Mariam Ghani and Leeza Amhady (July 21), and Poklong Anading and Ringo Bunoan (August 18). Upcoming gallery talks with artist Palden Weinreb on Himalayan art (June 28), Museum director Jay Xu (July 12), and co-curator Allison Harding (August 9) are also scheduled. In collaboration with Litquake!, the Museum presents several evenings (June 28, July 26, August 23) of MATCHA, a mixer with in-house activities. I’m especially looking forward to the presentation by dancer Dohee Lee referencing shamanism on August 23.

I’m currently reading a book on Gutai, a Japanese art movement from 1953 to 1972, whose members wanted to make a singular statement while far from the centers of cultural power and prestige. Mixing painting and performance, they were literally happening before happenings. From the hinterlands on the outskirts of Osaka, Japan, they reached out to European and American artists and critics through periodicals and publicity mailings. Embraced by important artists (such as Jackson Pollock and Ray Johnson), Gutai was more often misrepresented by contemporary critics and historians, who assumed that all non-Western art was derivative, and therefore unnecessary to inheritors of European Modernism. This cultural imperialism is now under scrutiny, ripe for reinterpretation, and sure to give greater credit where it is belatedly due.

Gutai and other Asian artists fought vigorously for exposure in the West. But art follows money, and Asia is recently positioned to become an increasingly meaningful player in the global art market. The increasing Asian collector base for contemporary art gives dignity, credibility and a livelihood to regional Asian artists, who are positioned to be truth tellers, public commentators, and intellectual agitators in their homelands. Drawing upon universal concerns and histories, Asian artists and their colleagues throughout the world draw closer, learn from one another, mix and match ideas worth preserving and exporting, forging a global future through a fusion of cultural understanding.