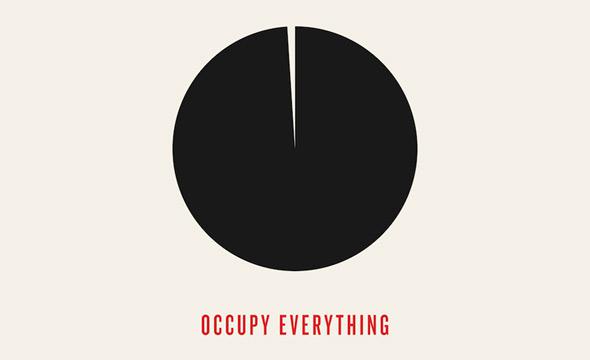 Since its inception in September 2011, the Occupy Movement has generated both praise and condemnation. A direct response to the financial instability, subprime mortgage crisis and the decline of trust in the government’s ability to effectively address the problems in the labor market, it continues to resonate in the American consciousness. In response to the significant output of art and documentation produced in support of the Occupy Movement in Oakland and San Francisco, YBCA has put together an exhibition of works that have proven to be particularly effective in supporting the goals and aspirations of the Movement. Impressively, various political poster artists devoted their talents to messaging the politics and culture of the movement by creating iconic images — designs that were a call to action, or posters announcing an upcoming event. In many ways these works, by twenty-five Bay Area artists, carry forward the region’s long tradition as a leader in political struggles, from the Free Speech Movement of the 1960s, to struggles by communities of color in the 1970s, to AIDS activism in the 1980s. The exhibition also includes a selection of photojournalistic and documentary photography and video that serve as a record of the events around the Occupy Movement.

Additionally, to connect to earlier movements and provide a historical context for the project, the exhibition includes posters and photographs from other political struggles, including the Black Panther Party, I-Hotel in Manilatown (1968–77); the ARC/AIDS Vigil at City Hall (1985–95); the Occupation of Alcatraz (1969–71); the Free Speech Movement at UC Berkeley (1964–65); and the San Francisco State University protests, to gain an Ethnic Studies program and Black Student Union demands (1968–69).While these earlier movements certainly differ in ways from Occupy, they all are the result of a deep desire for marginalized peoples to be represented and treated fairly.

This exhibition is not meant to represent a fully executed social history, but is a testament of the power of images to evoke the emotional expression of popular and wide-spread sentiments. By localizing our efforts, we also pay special tribute to the role that Bay Area artists have played in giving voice to the 99% and utilizing art as an effective vehicle for social change.

ConVerge is a free monthly public gathering of art, ideas, and people featuring creative and generative social art practices. At ConVerge, the after-work hours get infused with a big, loving dose of cutting edge art, innovative people, and community.Thursday, July 19, enjoy an engaging evening with performance artist Jessica Tully who employs each performance as a vehicle for social change and action. Using her craft as a representation of civic leadership, the audience will witness Tully’s practice of activating the intersection of performance and the public realm. In conjunction with YBCA’s Occupy Bay Area exhibition, this ConVerge will feature a community participation and interaction through the marriage of art and activism as seen by the Occupy movements of the Bay Area. Help us to Occupy Everything and witness Tully’s vivid aesthetics, overlaying spectacle and synchronicity.