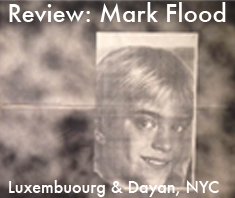 “The Hateful Years” chronicles the very poignant, unabashed works of Mark Flood from the 1980’s in 5 floors of 100+ paintings, collages and installations at Luxembourg & Dayan in New York City. Often called an artist’s artist because of his impossible personality and distaste for art world snobbery, Flood seems to have rebounded and sent his float into the very parade he pissed on for generations. Mark’s work often incorporates his experperiences working shitty jobs at video stores, slingin’ paint at elementary schools and office work at Texaco, stealing materials from his employer to create some of his most pointed and merciless pieces. His comedic alterations of pornography, iconography and commercial imagery uses both humor and repulsion to deconstruct everyday associations and desires. The “Muted Coke Bottle” strips the voice and power from one of the most recognizable corporate icons, reducing it to shape and color. The depressing part is we still know just what it is, in the way that you’d recognize your uncle Vinny holding up a bank with pantie-hoes on his head, or your dad dressing up in women’s clothing and taking a walk down Bowery so he can feed your ass. Ok that’s random but you get the point. Everybody has a running ticker in our brains of identifying products, brands, commercials and slogans.

In a similar series, Mark subtly but directly abstracts and alters the faces and bodies of pop icons like Billy Idol and Barry Manilow, smudging their skin like puddy. These back alley facelifts reconstruct our associations with celebrity and commercialized imagery, much like the “Muted Coke Bottle”. They become grosteque caricatures identifiable yet transformed into decimated, subhuman figures. Mark Flood’s anarchic perspective of contemporary culture laid the groundwork for much of the socially engaged and sometimes vulgar work now being made by others, continuing the legacy of Duchamp by using found objects and appropriated images in place of traditional skilled mastery.

“The Hateful Years” was curated by Alison Gingeras and is now on view through September 12.

Dean Dempsey is a really good artist based in New York City.

All images courtesy of Luxembourg & Dayan