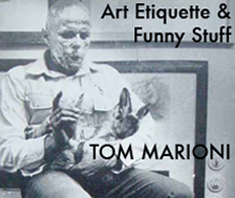 “The art writers that are assholes (not that there’s anything wrong with that) get drunk with power because they can help or hurt an artist’s career by writing about it. Most critics of all stripes never practice what they preach. Those that can, do, and those that can’t, write about it.”

**Why do some artists receive global acclaim, while other artists, often with significant national reputations, languish internationally?

Most great artists were rich and famous in their lifetimes, maybe not Van Gogh who died young by his own hand. Some of California’s great painters of the recent past are unknown in the rest of the word. Sometimes artists are regional or provincial in their style and do not relate to people in other cultures or are seen as copies of French or Italian artists. Artists who invent a style, or way of making art, become influential to other artists who spread a look to the world. The really great artists establish a new way of seeing by inventing something. Duchamp invented conceptual art, John Cage invented the Happening, Brancusi invented abstract sculpture, Kandinsky abstract painting, Picasso collage, Yves Klein invisible art, Joseph Beuys the sculpture action, etc. Sometimes a local artist is unknown or not respected in his or her own region but is well known in Europe and Japan.  Jesus said, “a prophet is not without honor save in his own country,” in other words, everywhere but in his own country, and look how famous Jesus is in the US of A.

**Why are there so many women in the arts and what is going to happen to all the men?

First of all, be a man. I didn’t write this question, but if I did I might sign it Anonymous. We had our day and now it’s time to turn it over to others. Women are just as good as men, only slightly different. With a remote control, a woman wants to know what’s on and a man wants to know what else is on. Men know stuff about tanks. Women can spell well and smell good. A man understands the principle of the internal combustion engine. Women are not colorblind which is why more women are painters than men. More men are sculptors because they can lift more weight. There are more woman in art schools, medical and law schools now so get used to it. Everything changes places, men with women, and socialism with capitalism, and good neighborhoods with bad.  Women live eight years longer than men so when you are 80, have a sex change operation.

**In hard times, where and how can we find humor in art?

Hard edges for hard times, that’s my motto.  Richard Prince started writing jokes on his paintings in the ‘90s I think; this was literally humor in art or in painting anyway. There is humor in the work of Jeff Koons and Damian Hirst but they don’t mean it to be funny, nor do they have my kind of sense of humor; like are #2 pencils still #2 if they are the most popular pencils? Sometimes after you tell a joke there is the kind of silence that one associates with outer space.

**What are artists trying to figure out? And in making art what is the importance of ignorance?

**Out of all the questions there are to ask, how do you cull the best questions, what makes the cut?

It’s not a problem. I answer almost all the questions. There are not so many. One question that I didn’t answer was a description of an artist’s work told in a way that I could not understand. There was no question. The best questions are short and not profound. I can answer them in a funny way.

**Two dealers want to represent me exclusively. One is a well known LA dealer who shows famous artists, has a beautiful space, and places to work with great collectors and museums. A lot of her artists say they never get paid, even when they have contracts. The other dealer is a hot Miami dealer and she does many art fairs per year. Her space is small so my installations will need to fit into two suitcases if she is to show it around the world. She is honest and her artists get paid eventually but her collectors are not famous. Who would you choose?

I think this is a hypothetical question but I will try to answer it.  It is very common that artists don’t get paid for their work, especially if you live in America and have a show in Europe 10,000 miles away, or the work doesn’t sell and is not returned to you. Artists are the last to get paid because they are such soft touches and don’t have lawyers to intercede for them. I would go with the LA dealer because you can get there easier. You could do both because many galleries only want to be exclusive in the same city. Some artists have galleries in many cities in America and in other countries. It’s uncommon for a successful artist to have only one gallery in the world.

**What is Language art?

The official language art of the late ‘60s was an arm of conceptual art, and some think that language art is conceptual art. Robert Barry’s invisible FM radio waves in a gallery description on the wall, a Lawrence Weiner statement that the art need not be made, and a Joseph Kosuth chair, with a picture of a chair and a printed dictionary description of a chair are all good examples of language art. These works show the power of words and are sculpture based. My example might be more theatrical but paints an imaginary picture.  A man on stage holds up a sign that reads,  “AN ALLIGATOR EATING A DEAD MAN ON THE STREET IN NEW ORLEANS.”

**Why do art writers that have degrees in art history but never practice art get to be such pretentious assholes? And if we stop listening to them will they go away?

A guy walks into a bar and says, “All art critics are assholes.” And a guy at the end of the bar says, “I resent that.” And the guy says, “Why? Are you an art critic?” And he says, “No, I’m an asshole.” The art writers that are assholes (not that there’s anything wrong with that) get drunk with power because they can help or hurt an artist’s career by writing about it. Most critics of all stripes never practice what they preach. Those that can, do, and those that can’t, write about it.