I love Werner Herzog. But, then again, so does everyone. That was evident by the number of people in attendance at a conversation between Herzog and Trevor Paglen last Wednesday night under the stars in Bryant Park. The conversation was hosted by the New York Public Library as part of a celebration for the launch of Paglen’s soon-to-be-orbiting project “The Last Pictures”, though it really served to illuminate why Herzog is so beloved and why so many artistic efforts fail.

“The Last Pictures” is a collection of 100 photographs attached to a communications satellite that should orbit earth for the next billion years. If that sounds familiar, it’s because the idea isn’t very new. In 1977, Carl Sagan and NASA famously sent gold records with photographs and sounds out of our solar system aboard the Voyager deep space probes. The selection of artifacts Sagan selected to represent the earth and humanity are beautiful and thought-provoking – if not a complete picture of the reality of man.
Unfortunately, Paglen’s collection seems to have been gathered without a clear thesis or audience. The meaning of most of the images selected would be impossible to decipher without direct knowledge of the photograph or the larger context of the image. The best photographs are as beautiful as hotel art, the worst portray a shallow liberal’s grim portrait of humanity. Creative Time commissioned Paglen to create “The Last Pictures” four years ago. 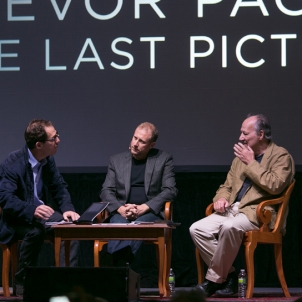 And this is where we come to Werner Herzog. Next to Paglen, it was easy to point to, and appreciate, Herzog’s artistic integrity, emotional and intellectual honesty and clarity of perspective. Herzog is almost bipolar in the extremity of his reaction to the world – vacillating between exuberant indulgence and merciless critique. Ignoring social niceties, he calls attention to subjects deserving of love and observation, and unapologetically dismisses those undeserving subjects that seek our praise. From the beginning of the conversation, Herzog made it clear that the shallow thinking and inappropriate images of “The Last Pictures” had ruined what could have been a beautiful piece. Though Herzog couched his critique in gracious compliments, it was clear that Herzog’s comments hit Paglen hard–enough to raise Paglen’s voice two octaves. Paglen introduced his piece as a way of explaining the current state of the world to visiting aliens or a future earth-evolved “giant squid” civilization. Herzog dismissed such thoughts as totally ridiculous – since he doesn’t believe there will ever be visiting aliens or a giant squid civilization. Paglen quickly abandoned his initial justification for his piece and pivoted to the explanation that it was more of a “thought-experiment” for us – the people sending it out. Exchanges like this continued throughout the entire hour and a half-long discussion. Herzog repeatedly called attention to the lack of thought or substance in the execution of Paglen’s three-year effort, and the audience laughed. It was devastating – but not cruel. Paglen deserved it – he hadn’t really thought through what he was doing – and Herzog did nothing other than emphatically direct our attention to the truth. That’s Herzog’s strength, and why we love him. The inability to grapple with truth – getting lost in shallow concepts and grandiosity – is a common failure among artists, as evidenced by Paglen, and audiences, when we unconciously mold our opinions to expectations of how we’re supposed to feel. Watching Herzog, in his his invigorating clarity and honesty, is refreshing and inspiring. Just be careful if you invite him to discuss your work.