Interview with Chris Lux and Dane Johnson at The Popular Workshop, San Francisco

Below is an interview conducted by Nate Hooper from The Popular Workshop, San Francisco with artists Dane Johnson and Chris Lux.  Both Lux and Dane are currently based in Los Angeles and have an exhibition, “Eating Out of the Drain” currently up till November 17th, 2012.  The exhibition is composed of a collection of flat works and sculpture that embody the range of each artist’s studio practice.  Hooper, Lux, and Dane discuss the concepts that drive their practice, their processes, and their involvement in the counter culture community.

Both of you met at the San Francisco Art Institute (SFAI), correct?

Dane Johnson: Yeah Chris and I met at the Art Institute in 2000. We got to know each other in the Bay and now we are both in Los Angeles.

How has the transition from San Francisco to Los Angeles change your practice? Has Los Angeles influenced the concepts and process of your work?

DJ: It’s hard to know exactly how my work has changed when I moved to Los Angeles from SF.  I think the difference in my work is less about location and more about the fact that I am not in the process of getting a BFA.  San Francisco was a great place to be for the time I was there but my work was largely determined by the process of getting an education.  Now I am a million years out of that process and Los Angeles has become a really productive place that allows me to just sink into my life and make work in response to that.  I spend a lot of time tripping out on my visual surroundings and living in Hollywood amplifies that experience.  I am really lucky to be living in the heart of Los Angeles and being able to experience in real time the production of images that informs so much of what I do.
Chris Lux: Moving to Los Angeles has changed what I do a fair bit, being around a more vibrant and varied scene of artists, access to materials and crafts persons that I never knew existed and being able to have a bigger studio are just a few things that have changed my practice.

Can you talk about your collaborative effort in this exhibition together?  What are some differences and similarities in the concepts that drive your work and your studio practices?

DJ: We have wanted to have a show together for a long time but the timing has never been right. There are plenty of visual and conceptual differences in our work but the conversation that got us to this exhibition was the  connection  that comes from our use of appropriated source material.  We both work from existing imagery but to different ends.  My interest lies in more fleeting contemporary sources like newspaper photos, music videos, advertisements and sports photography where as Chris looks further back in history to images that have stood the test of time.  Eating out of the Drain sets up a conversation that looks at our role within an expanded timeline of picture making.  It has been nice to see our work together for the first time because I have found there is more that links us together than I would have previously thought.

CL: We have worked together on many projects, but we have never really shown together before. Its great to see it all come together. Our work is different but I think i think the dialogue is an important one in terms of how artists are dealing with the overwhelming mass of images seen everyday. I feel we represent two different ways of working with images, Danes recontextualization of everyday images, and my reuse of other works of art to create new pieces. I think it interesting how peoples identities can be based so much on a collection of objects and ideas from other sources. I think its an interesting topic.

Could you elaborate a bit about your choices of imagery and culture that you each reference, and on the significance of some of these relationships and their collective outcome? Dane, you had mentioned how a lot of this stuff comes from a very personal place.

DJ: I gravitate towards imagery that holds a certain power even in it’s sometimes fragile and humble beginnings.  Since I source most of my imagery from all of the junky stuff that piles up in my surroundings it takes on a bit of a diaristic quality.  It’s pretty stream of conciousnessy a lot of the time.  It usually starts out as something amazing that catches my eye.  Depending on the what the little bit of information is I’ll extract it from the context I found it in like a magazine ad or a little treasure that I find and then I live with whatever that is for awhile.  Sometimes it is tacked up on the wall and sometimes it lives in a drawer.  Over time I develop a relationship with all this stuff and every once in a while something will float to the surface that feels significant but needs the next step of me adressing it in some way.  At that point I try to figure out a way to make it even more important. Sometimes that’s painting something bigger.  Sometimes it is putting it on a pedestal or just putting a frame around it. The imagery that I am presenting in Eating Out of the Drain gets at some pretty basic life stuff: Protection, friendship, sexuality, relaxation, humor, sense of time, and whenever possible, two of everything! There is a symbiotic quality in producing a piece of art based on an image that is already out there. I am given a collection of images that I find to be protective and supportive in my life and in return, I hope that by re-contextualizing them, I am providing them with presence that can be admired by whoever wants to see them.  In a perfect world it resonates with everybody but for now I am trying to make work that speaks to the people I have access to.

CL: I made three pieces for this show, a table, a painting and a book. The Table (wich also is a shelf) is an extension of my last show at Jancar Jones in Los Angeles called “Find Out Why They Call them Pigs” that was based on the Scientific collection of Sir John Sloan. This collection basically was the start of the British Museum, and the way its displayed is more of a Cabinet of Curiosities. The Large painting is based off of Depeche Mode’s Video for “Halo”. That Video seems to be based loosely on imagery from “The Seventh Seal” by Bergman, and I painted it in a way that is supposed to reference the painter Balthus. The Book consistis of original large illustrations based off “The Golden Legend” By Jacobus de Voragine in the 12th century and chronicles the lives of Saints. I created the work in extended stay in Tuscany last year, and it was made into a book by Perdam Press in New York. I want to inhabit these other works of art so badly and yet still make something new. 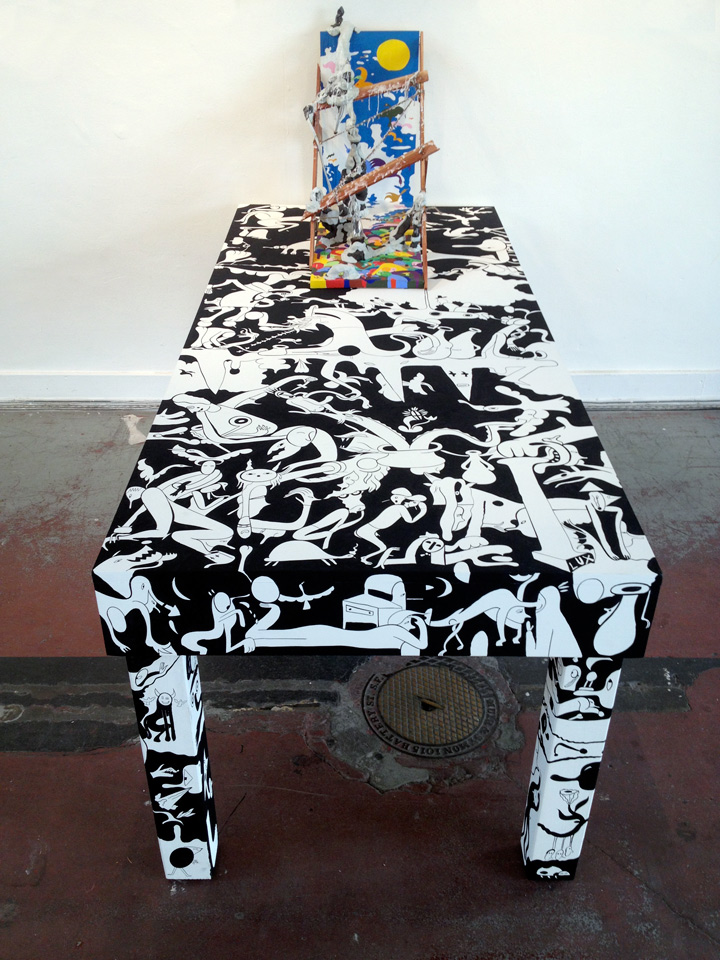 Could you talk about your involvement in DRUGS Crew and how graffiti has influenced your studio practices? Being involved with Art In The Streets must have been a great experience. And Chris, you’ve got some work in Barry’s mid-career retrospective. Do you guys intentionally make different work for these different contexts or does it all kind of exist under the one umbrella?

DJ: Graffiti has had it’s biggest influence on me in the way that I look at what is around me.  When I was young it taught me to keep my eyes peeled for things to tag on or the police but that transfers over to just soaking it all in too.  You can use your graffiti looking skills for appreciating everything.  I think there are some obvious nods to graffiti in the use of text and color and scale but I have always been a little adverse to marrying graffiti to what I do in the studio.  Street Art is pretty dopey but there are lots of artists I really look up to that got their start by tagging and are now making amazing art without being defined by graffiti.  I have previously spent a lot of time worrying about making work that looks finished and polished in a way that can be understood by everybody.  The recent DRUGS shows have definitely helped to turn that boat around in regards to working in a more fluid way and getting a little freakier in the studio.

CL: I did graffiti as a kid, it was important part of how i experienced the city. I also learnt how to mix paint from scratch and draw from the figure at a very young age, so I never felt more into one than the other growing up. I id both at the same time and consider them to very different, but there is an overlap in some places but less than you would think. Doing graffiti is fun, but it always looks like crap. Thats why people don’t like it. DRUGS doesn’t try to hid that, we try to do the worst. Being in “The Art In The Streets” was a kind of insult to everyone in the show that takes it seriously because we do not. I put a collection of creepy trash and found notes and photo in Barry’s show. It was all collected in San Francisco in the 1990’s off the street. He needed to fill some space and wanted it, it made sense with his aesthetic.

The Popular Workshop is proud to present “Eating Out of the Drain,” an exhibition of new work from California based artists Chris Lux and Dane Johnson. Presenting documentation and sequential examples of his own artistic process alongside three principal pieces of sculpture and painting, Lux expands upon his own previous work, and articulates a lineage of inspiration that leads from Ingmar Bergman, Depeche Mode, and Balthus, to Sir Hans Sloan,  Pope Pious VI, and Jacobus de Voragine. Sourced from a collection of objects and contemporary images compiled within the confines of his apartment, Johnson’s work, shown in an array of mediums including painting, photography, print-making, sculpture, and collage, addresses the increasingly abundant and disparate elements of visual culture.  While rejecting cynicism and desensitization, in favor of protection, safety, and above all, pleasure, he defines the artist’s position as a catalyst for correlation and cohesion. With the work of Lux and Johnson, “Eating Out of the Drain” makes an attempt at a visual language with which to navigate the palimpsest of our societal history, and address where we now find contemporary culture.