Taro Shinoda has presented a great film piece “LRTT (Lunar Reflection Transmission Technique)” in his solo exhibition “Homo sapiens sapiens” at Taka Ishii Gallery in Kiyosumi, Tokyo.  It is a fascinating piece that uses footage of the Moon from Istanbul, Boston and Tokyo using a telescope to capture the up close imagery of the Moon’s surface.  Shinoda is an artist who is driven to bring attention back to the Moon and reestablish the connection between man and nature.  Shinoda’s works are very poetic and are better understood after reading his writing below:

“As man is merely but able to grasp the flow of occurrences in the world through abstraction, I feel that only a higher existence which transcends us is capable of objectifying our civilization and our culture. Just as we can for instance, objectively look upon a fight amongst stray cats in the neighbourhood… Whilst looking upon the scene, I think to myself that if I were a cat I would be able to play my cards better. How poor and inefficient our civilization must seem, when considered from a higher existence. I somehow understand that myself, yet I am unable to find a means to escape from it. I see and feel the world purely through subjective means, yet the astronomical body observes us with perfect objection. Amidst the near infinite flow of time, how am I to apply myself as an existence that per chance has obtained that precise moment? I simply wish to see, how and what, is going on.” 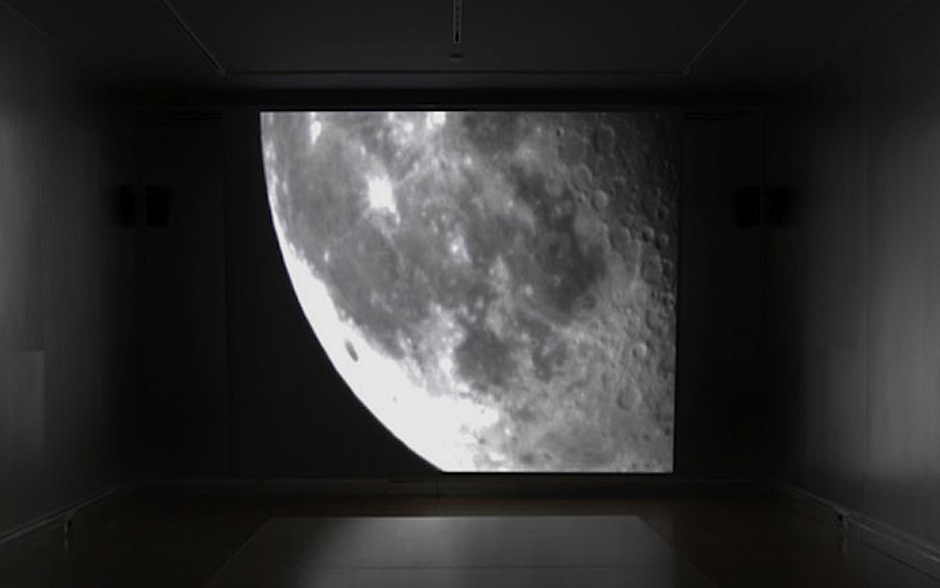 “LRTT (Lunar Reflection Transmission Technique),” is comprised of film footage of the moon shot from respective locations in Istanbul, Boston and Tokyo. Shinoda appropriates the subject matter of the moon; the single observable satellite from various areas of the earth, in order to realize the sensation that mankind collectively shares this planet. He involves himself in the production of works with an inverted concept at their origin; that we do not look at the moon, but it is in fact the moon that looks upon us. The moon which we look at reveals itself in various forms depending on the location in which we gaze upon it – in order to raise this issue, Shinoda creates paintings through observing the moon in various locations through an astronomical telescope. Selecting a pure white aluminium plate as the base medium, the works are subject to multiple superscriptions and though portraying an abstract dimension, express the diversity of the appearances of the moon. In exhibiting the astronomical telescope used for the production of the works further to the presentation of the film and the paintings, the artist hopes to introduce the entirety of his project.

Next post Interview with Chris Lux and Dane Johnson at The Popular Workshop, San Francisco