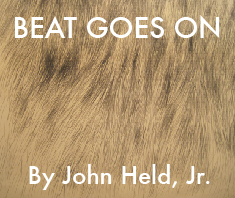 Drums keep pounding a rhythm to the brain

Charleston was once the rage, uh huh

The San Francisco Bay Area, unlike Southern California, has not yet had our Pacific Standard Time, a wide variety of synchronous exhibitions highlighting the history of the regional art scene. Our major cultural institutions have not saddled up like our So Cal brethren (or ponied up like the Getty) to present a united front in support of a multifaceted regional cultural history. Nevertheless, our locale has a deep and rich artistic heritage, and our art professionals are mindful of it.

The period 1950 to 1970, which Pacific Standard Time addressed, was just as vibrant in San Francisco as Los Angeles, and in the earliest moments of the period, the migration was from Southern California north. We had the California School of Fine Arts (now the San Francisco Art Institute), and adventurous Los Angeles area artists like Wally Hedrick, David Simpson, Deborah Remington, flocked here, not only to attend CSFA, but to open their own gallery space (The Six), and present some of the most challenging art, poetry and film of the era.

Driven out of Los Angeles by an art bust at Ferus Gallery, Wallace Berman brought his family North, opening the Semina Gallery on a houseboat in Larkspur, attracting his friend and kindred spirit George Herms. For many, like Berman, their destination in San Francisco was 2322-2330 Fillmore near the corner of Washington in the Western Addition. I quote from DiRosa’s guest curator Michael Schwager’s exhibition notes on, “Renaissance on Fillmore 1955-65,” at length to give some perspective on the diversity of talent, which passed through its doors.

“Even a partial list of the occupants from the mid 1950s through 1965 – when the building was sold and many of the artists were evicted – reads like a Who’s Who of Bay Area Beat art and explains the building’s nickname, ‘Painterland’: artist and filmmaker Paul Beattie and his wife Dee, who were there around 1955 and 1956; newlywed painters Joan and William H. Brown; Bruce and Jean Conner, who shared lodgings with the poet Michael McClure and his wife Joanna briefly in 1957 before moving to their own place a block away on Jackson Street; Jay DeFeo and Wally Hedrick, likely the building’s longest-tenured residents and its creative heart, who lived next door to the Browns and were introduced to the building by Beattie, taking his flat when he left; Craig Kauffman, better known as an L. A. artist but who lived for a time in the flat of Jim Newman, founder of the Dilexi gallery; husband-and-wife AB/Ex painters James Kelly and Sonia Gechtoff, who left Fillmore for New York around 1959; the painter and musician Dave Getz, a resident between 1962 and 64; painter Les Kerr, who along with his wife, documentary filmmaker Mary Kerr and their son and daughter, lived there about the same time; and Ed Moses, another artist identified with Southern California, who with his wife, Avilda, took over Newman’s place around 1960.”

There are numerous surprises awaiting the exhibition goer. How did that fabulous Jay DeFeo work, “Song of Innocence,” (1957) escape the clutches of the current SFMOMA retrospective? It’s a mini-Rose, flatter but effective in it’s tangle of brushwork crawling toward the center. The painting’s loan by the DeFeo Trust was definitely a vote of confidence in the exhibition’s focus. Bruce Conner is represented by three works, two of them assemblages, including a magnificent nylon work coming from the DeRosa’s own collection. Wife Jean steals the show with a small black and white collage, “Was an Angler, and He a Fish Caught.” Although she’s been shown at SFMOMA recently, Jean Conner deserves more attention, as this singular work proves. There are incredible oils by Deborah Remington and Hayward King. Two large Remington’s are unusually powerful. She requires additional attention as well.

Before we leave the painters aside, Wally Hedricks 1956’s large (127”x78”), “Fred’s TV,” was a natural for Paul Schimmel’s current, “Destroy the Picture: Painting the Void, 1949-1962,” at LA MOCA, but it escaped, and here it is instead – scraped, scratched, scarred and scrawled upon. Talk about under recognized – add Hedrick to the list.

We have local photographer Dennis Hearne to thank for saving many of the negatives by long time Art Institute photography instructor Jerry Burchard, who died in 2011. Among those recused from the dustbin, is a series of photographs, “Fifty from the Fifties,” which portrays many of the artists in the exhibition including Joan Brown, Bruce Conner, Jay DeFeo, Wally Hedrick, Hayward King, Deborah Remington and David Simpson. God bless the Jerry Burchard Estate for their generosity in sharing the late photographer’s work in current and past shows, for they are unique time capsules of the era, presciently chosen subjects granting unprecedented access to his gifted eye.

Bay Area art collector David Jones contributes posters by Wallace Berman and Michael McClure, as well as a flyer from King Ubu gallery, located just down the street at 3119 Fillmore, providing additional context to the period covered. I love ephemera. I wish there was more.

While the DiRosa exhibition focuses on a single residence, the Beat show at 871 Fine Arts spotlights a singular exhibition of the era, “Action Painting of the West Coast,” which was held at the Merry Go Round Building on the Santa Monica Pier from May 18-27, 1955. It’s legendary for several sound reasons.

It brought together the curatorial efforts of Walter Hopps, Jim Newman, Craig Kauffman and Ben Bartosh. Hopps went on to found Ferus Gallery in 1957, which exploded the underground Los Angeles art scene and brought many San Francisco artists southward. Jim Newman, after witnessing ragtag cooperative artist galleries come and go in San Francisco (East/West, King Ubu, Six, Spatsa), opened Dilexei Gallery, which gave most of the Beat artist their first exhibitions in a professionally run gallery (meaning it was usually open as announced).

Hopps thanks the “6” gallery in his introductory notes, “Action Paintings of the West Coast,” for contributions to the exhibition, the first display of “action painting” or Abstract Expressionism, as Hopps proclaims, “largely from the Bay Area and Los Angeles.”

Adrianne Fish, proprietress of 871 Fine Arts, has gathered work by a substantial number of artists who exhibited in the Merry Go Round show, many having work in the DiRosa exhibition including James Kelly, Sonia Gechtoff, Bill Brown, Craig Kauffman, Jay DeFeo and Wally Hedrick. The 871 show adds additional works by Hedrick, DeFeo, James Kelly, Hassel Smith and Roy De Forest and piles on with extremely choice works by lesser known figures of the era like Relf Case, Paul Wonner, Julius Wasserstein and Adele Landis. This focused examination takes aim on a historic exhibition in which the participating artists set the table for advanced art in both North and South California for the next decade.

It’s a lot of work in a small space packing a major punch. I’ve got James Kelly’s untitled oil on paper work from 1951 on my screen saver. It’s shockingly good…and early. The exhibited works, from as early as 1948 (James Budd Dixon, Edward Corbett), are drawn mainly from the early to mid fifties, with Hassell Smith contributing several works on paper from 1963, the latest works in the show. There is a large early (1958/1960) oil by Roy De Forest, which is the best work I’ve ever seen by him, and I’m an admirer. The untitled oil is just straight out painting, no visual pratfalls, which tend to inhabit his later works.

The other work that stands out for me is Sonia Gechtoff’s large (41” x 35”) graphite work on paper, composed of strokes…just strokes, but just enough and so well placed. She is a unique talent with an interesting story – her colorful mother opened one of the early painting galleries in The City, the East/West Gallery, just down from Ghost House.

The twenty-five works on paper and canvas at 871 Fine Arts are complemented by documentary ephemera of the Merry Go Round show, some provided by the widow of curator Hopps. But that is only the half of it, because 871 not only presents unique historic and contemporary shows, but is at foundation, a bookstore…the best art bookstore in San Francisco. If you want additional information on any of the artists in the show, and you want to take it home in book form, you’ve come to the right place. 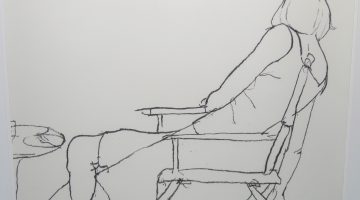