I recently popped into tiny Brooklyn gallery Beginnings for the (very sweaty) opening of  James Ulmer’s current exhibition “Drawings”. Ulmer, a native of Philadelphia and former member of Space 1026, currently lives in Brooklyn, and his show marks the unfortunate finale of this great little gallery.

Ulmer has an exuberant hand and a propensity toward dense, crudely rendered illustration. Not previously familiar with his work when I stepped into the gallery, I immediately thought of several of my favorite artists: Chris Johanson, Ryan Travis Christian, Gary Panter and the collective Sumi Ink Club, just to name a few; although the work doesn’t feel contrived or derivative.

Instead, there’s a bit of innocence and wonder in these drawings, as if the simple act of putting a brush to paper provides a wellspring of joy for the artist, a source his audience might also take away with them.

Primarily ink and watercolor, the drawings play by seemingly simple rules. Quickly executed figures stack up on rows of lines. Blobby, mostly freehanded patterns find and lose their decipherability, like Rorschach tests seen in a fever dream. Grids of objects, faces, squiggles and shapes form into fast and playful compositions that nonetheless suggest a methodical and determined motivation.

With simple, mostly descriptive titles like Men with Hats, Football Players, Colored Shapes 1, etc., the body of work represented by these drawings doesn’t pry deeply (or at all) into any real social gravitas, but we don’t hold that against it. In fact, it is precisely the lightheartedness of this work, its sense of play, its comic exaggeration and repetition which pulls viewers in and makes us all ten years old again, waking up early to watch hours of cartoons on Saturday morning. I’m grateful every time an exhibition reminds me of those immensely joyful, now distant memories, and tip my hat to Ulmer for the experience.

James Ulmer earned a BFA in Illustration and Design in 2005, from The University of the Arts in Philadelphia. He has exhibited in Baltimore, Portland, Austin and Philadelphia. According to the press release for the show, he is “a lover of cats and dogs and comics and reggae”. Drawings is up at Beginnings through July 28. If you can’t make it in to see the show, Ulmer also has an Etsy page linked on his website, with a handful select drawings available there. Lastly, the gallery is having one final event today, July 29th (6-10pm), a large cash and carry group show with a knockout list of artists. It’s sure to be a madhouse. See you there?

Next post Two Sketches of White Show at the Armory, New York 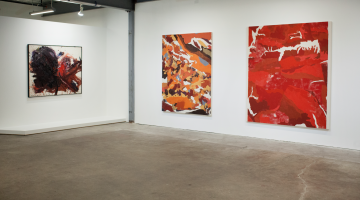