Putting elaborate theories aside, “installation art” is the art of weird rooms. And, as a general rule, the more specific the room the more effectively weird and wonderful the

installation. My two favorite things in the 2013 Carnegie International, which opened this weekend, were installations sited within the specific idiosyncrasies of the Carnegie Museum of Art. 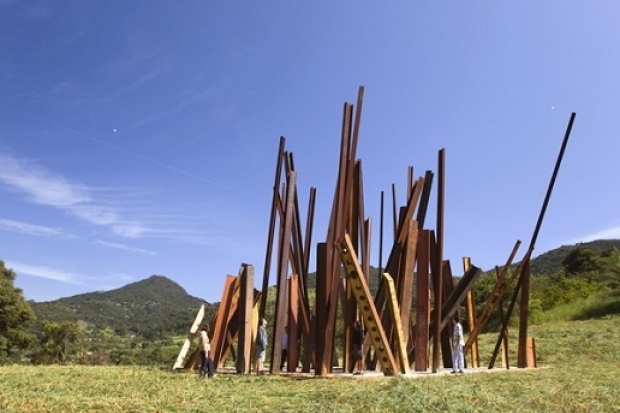 The first was Gabriel Sierra’s “Untitled (111.111.111 x 111.111.111 = 12345678987654321)” (2013) which engages the iconic heart of the Carnegie Museum of Art—a vast room filled with plaster casts of Western art history called the Hall of Architecture. A part of the facade of Notre Dame over here, the Porch of Caryatids over there, it was a gift of Andrew Carnegie as a way to give American’s access to vast cultural riches they might never see in situ. It became a site of embarrassment for much of the twentieth century when originality stepped up as an ideal of American cultural power. With post-Post Modern eyes however this room has its own affectionately cluttered charm. It is already an “installation”—a pastiche of centuries of significant “monumental” things—so any intervention must necessarily be slight. Thus the Colombian artist Gabriel Sierra choose to paint all of the walls and peripheral surfaces purple, a happy change from their regular muted olive. He also included some subtle almost musicological objects of his own, like a large box that hugs the steps of the stairs. The effect is “nice” in the way that you might say someone you went on a date with is “nice” but that you never really intend to see again for no reason in particular. As a change in mood I’m not sure the purple draws anything new out about the Hall of Architecture, either its tackiness or its elegance, but reclines into some neutral position in-between. I began to really like it during the opening gala when everything was loud and crowded, full of people laughing and talking. I walked in the Hall of Architecture and there wasn’t a soul in sight, so I ran around, danced up and down the strange passages. I skipped to the guard by the door, Amber, and asked “why isn’t anyone in here?” “I have no idea.” “Do you like the purple?” “Yes, I think its beautiful.”—good enough for me.

Mark Leckey “Made in ‘Eaven” 2004. Still video transferred to 16mm. Courtesy of the Artist, Gavin Brown Enterprises, and the Carnegie Museum of Art.

The other installation, which is actually much more interesting, was Mark Leckey’s “Made in ‘Eaven” (2004). To see it you have to walk out of the art galleries to the Natural History part of the museum, with its taxidermy dioramas and illustrations of geologic formations, until you get to the “Wertz Gallery of gems and jewelry” full of precious objects surrounded by mirrored panels and shining glass cases. In the center of the gallery is a 16mm projector clicking away, sending images onto a screen situated in a doorway, flanked on either side by jewel cases. The film shows Jeff Koon’s iconic silver bunny in the center of an empty apartment, the camera floats around it like a ghost, or more like a vampire because there is no trace of a reflection—either the camera or operator. It is a startling and amusing effect, aided by 16mm which embeds an unconscious sense of “directness” to the footage. Video on a monitor would have immediately read as computer animation so this digital fabrication was coyly transferred to film. Embedding Koons within the strange position of jewelry in a Natural History museum—highly valuable commodities with an overawing appeal to “beauty”—is amusing in itself, but the array of reflective and translucent surfaces is especially rich (film is actually light passing through colored transparency, connecting it experientially to the effect of the luminous jewels.) They are all things “immaculately conceived”, perfectly and meticulously crafted, leaving no trace of the human hand: the fetishized commodity, Leckey’s piece self-consciously included.

The next day I was invited to a tea party in a strange part of Pittsburgh by someone I had met once in New York, Daniel Pillis, now attending Carnegie Mellon University’s MFA program. I arrived at the address, not sure I was at the right place. There was a bizarre “Yard Sale” sign among overturned lampshades held down with rocks. I knocked and called with no answer. As I was walking away the door whipped opened and someone yelled “go around to the back.” So I walked through a gate along the narrow lane beside the house to an open cellar door.

Daniel Pillis performing in his installation.

As I walked inside I found the basement full of lamps, a record player, a staticy loop of Dean Martin on the television and suddenly the tail of a robe disappearing up the stairs, the way Buffalo Bill does in “Silence of the Lambs.” And I start wondering if I was going to be murdered in this house—no one knows where I am. I call out “Hello” and walk up the stairs. There is noise from televisions and radios in other parts of the house. I’m not sure if anyone else is there aside from the person who yelled at me to come in who believe ran up the stairs. The house is hot—all the windows are sealed over and it smells bad, like old women and gay sex.

I get into the kitchen and see Daniel Pillis, wearing red long underwear and a house coat, nude colored socks. “Oh, hi, you must be here about the lamps, I’ll make you a cup of tea.” It is actually uncomfortable psychologically and atmospherically; he is speaking like a old woman. At that moment, to my relief, three people walk in from another room, one of who I know from the night before. They all look unsettled and uncomfortable. I refused all food and drinks, determined to get out alive. I walk into the other rooms, a bizarre accumulation of old lady stuff, not particularly transformed like an art installation just put together maniacally.

Greer Lankton “Its all about ME not you” 1996. Courtesy of the Mattress Factory.

It reminds me of a lot of things, of why someone called the police on Lynn Hershman-Leeson’s installation in the Dante Hotel in the 1970s for example, or of Greer Lankton’s room of dolls at the nearby Mattress Factory. Apparently Pillis moved everything from his grandmother’s home in New Jersey to Pittsburgh and used it to create this installation. He was performing her, something too reminiscent of “Psycho”.

From there I went to another collection of weird rooms. In a different neighborhood, photography collector Evan Mirapaul commissioned artist Thorsten Brinkmann to create a permanent installation, “La Hutte Royal”, which also opened this weekend.

When you open the door you are confronted by a large bell. The other rooms on this floor are kinetic aggregations of sound related objects—records built into tables with spinning pink ears. These are basically environments to display Brinkmann’s photographs, largely self-portraits in various types of art historical drag, always with his face obscured. (Coincidentally Yasumasa Morimura has a retrospective that opened this weekend at the Andy Warhol Museum.) The whole affair is a kind of warmed over surrealism with a hearty dose of visual merchandising.

That is not to say it isn’t fun, which is the only requirement for a fun house after all. The most interesting room is a kind of theatre upstairs where all the seats are old-timey hair dryers. Unlike Pillis’s house, there is no sense of danger or anything unsettling about “La Hutte Royal”—it is safely and undeniably “art.” Apparently they might let you sleep there, which could be the most interesting way to see it.

What is interesting about Pittsburgh is that there is so much experimentation with “installation” because of the sad fact that their population has dropped by about half since its days as a manufacturing boom-town. Space here is cheap. Mirapaul says he plans to continue developing art houses in this neighborhood, which is a fun idea, and probably good for everyone. I’m happy to get back to New York though, where no one can afford to make weird rooms so they just make weirder selves.

Next post SFAQ Pick: "Marking Language" group exhibition at the Drawing Room in London. In collaboration with the Drawing Center, New York.