“Why does shit have to be so fucked up?” asks Jeremiah Jenkins. Because it is! The world has gone mad. Too much money, too much poverty, too many lies, too many questions, and not enough answers. However, as far as Jeremiah is concerned, that’s a good thing, otherwise he might be working at a gas station near the Appalachian Mountains.

While the world may be “fucked up,” Jenkins’ art is decidedly attractive. His artwork grabs objects with an inherent meaning and flips their form into unique relationships, creating a different sense of space, time, and sensation. Whether it’s social sculpture or performance art, the work is accessible, formal, and layered through the use of metaphor.

“Credit Trap,” (2008) pictures common financial choices and predicaments: predatory lenders, banking vultures, consumerism, convenience culture, and the daily grind—all of which can fit into your wallet. It’s a small piece, sneaking in under the guise of “actual size.” The snap would sting a bit, but the image hurts worse when the viewer realizes that he or she is the helpless mouse in the game of consumerism. Jenkins seems to imply that being in on the joke doesn’t get you out of the trap.

“We live in a world where things are pretty fucked up. Organisms are either trampled or eaten by a larger organism or shut down from the inside by smaller ones. Vital water falls from the sky, rushes through valleys, and sloshes around in giant pools. Electricity shoots suddenly into the ground burning everything it touches. Air moves and blows away mountains. Humans have come up with a lot of shit to make things easier. Easy shelter, easy food, easy survival. But somehow all of our shit got fucked up on its own. It’s my belief that things don’t have to be that way.”    -Jeremiah Jenkins, April 2012

“BP Mandala”
sand
2011. Courtesy of the artist and Ever Gold Gallery.

“BP Sand Mandala,” (2011) is a piece heavy with inherited meaning. He draws the British Petroleum Logo with brightly colored beach sand, as a medium. A dead pan representation of globalization, oils spills, marketing, and natural resources that sits flat at your feet. Jenkins seems to present meaning with a purposeful lack of sophistication, but the effect of his materials allows the viewer’s interpretation to expand.

On February 8, 2013 at SFAI’s Walter & McBean Galleries exhibition devoted to Gutai (an avant-garde post war Japanese art group 1954-1972), Jenkins was asked to re-interpret Kazuo Shiraga’s Challenging Mud. His performance took place at the opening reception and was meant to serve as the “American” version. He took on the persona of an wrestler with a steroid infused attitude and the exhibitionist essence of the American Spirit.

During this action, Jeremiah wrestled himself in a pile of mud. The performance was clearly and intentionally derivative, but stayed well short of the self-refuge of irony.

This is what I like about Jeremiah’s work, shit doesn’t have to be taken so seriously, which in my opinion is so important for the world in which we live. It’s ripe with meaning, but it’s also extremely humorous.

Another of Jenkins’ social sculptures is the American flag made of 100,000 matches. It’s impossible not to think of Johns anytime an artwork incorporates the American Flag —and again, Jenkins doesn’t duck the issue of artistic inheritance—but the physicality of 100,000 matches pulls the piece out of icongraphy and delivers a tinderbox of new and potentially destructive possibilities.

Jeremiah Jenkins’ solo exhibition “Survival Guide” is on view at Ever Gold Gallery through January 4th, 2014.

This article is selected from SFAQ Issue 13. 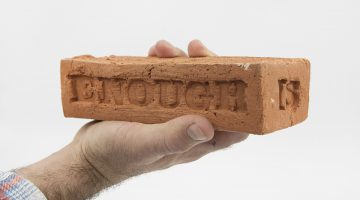