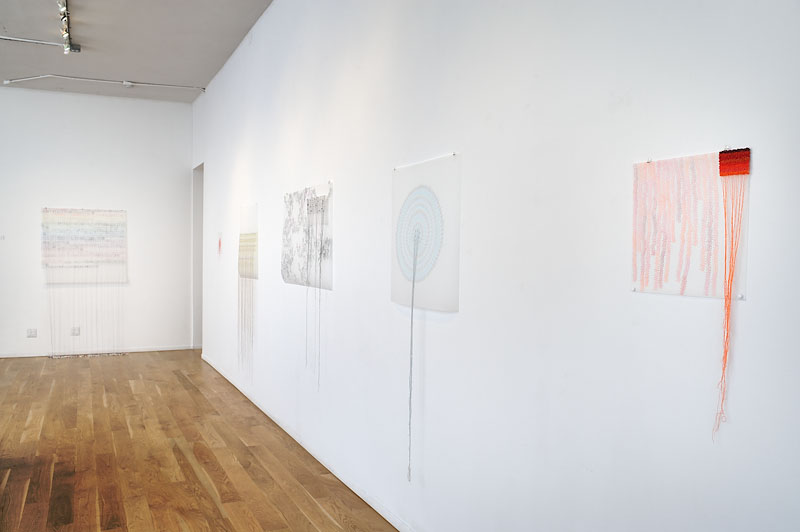 Lisa Solomon’s exhibition is more than a single installation work, but I’d like to focus my attention on it alone. Simply put, I haven’t been this impressed in years by an installation for both its physicality and conceptual punch as I am by her new wall mounted work currently on view at Fouladi Projects. “Sen” is composed of 1000 doilies, each containing 1000 stitches, 10 doilies each in 100 different colors. On the surface, it sounds like just another minimal work, plotted out in a grid format. It’s not.

Lets backtrack to the meaning behind it. Not that it doesn’t hold it’s own as a decorative work of and by itself. It does. But Lisa’s work often deals with gender archetypes and her own personal history, and she confronts both issues directly in this work. Her mother is of Japanese heritage, and Solomon examines the number 1000 in the culture, specifically the tradition of Senninbari, good luck belts crocheted with 1000 French knots by Japanese wives to protect their husbands when they go off to war. 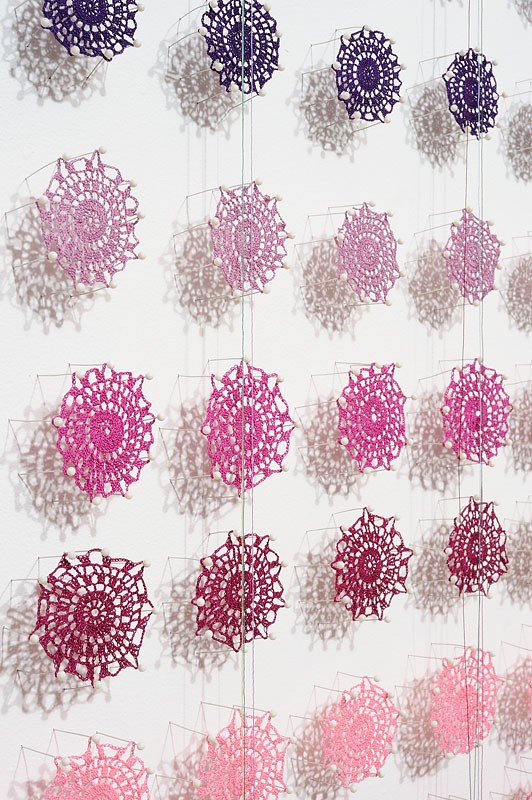 The crocheting is often done in a communal setting, and this aspect of the work is particularly appealing to me. Lacking a husband to send off to war, and a community of women with which to commiserate with, Solomon takes a completely contemporaneous approach to art as social practice. Reaching out through Facebook and Instagram, Solomon was able to recruit 45 people to help her with the project, sending out an instructional video to each. I love this idea of building a community, however temporary, though the Internet and turning it into art. Her accomplices are located in Denmark, Belgium, Austria, Canada and throughout the United States. I’ve been doing this for years through Mail Art, a low tech communication medium, time delayed to be sure, but quite capable of establishing a creative community however anonymous.

Lisa is a graduate of the University of California, Berkeley (BA 1995) and Mills College (MFA, 2003) and currently teaches professional practice for artists at San Francisco State University. I encourage the emerging artist to access her website and peruse the long list of solo and group shows, lectures, residencies, commissions and publications she has been mentioned in. It is an exemplary record, and one to emulate (http://www.lisasolomon.com/bio.html) Solomon also teaches color theory at California College of the Arts. Here wide exhibition credits include the Nicoletta Rusoni Gallery in Milan, Italy, where she first installed a smaller version of the current work in 2011. 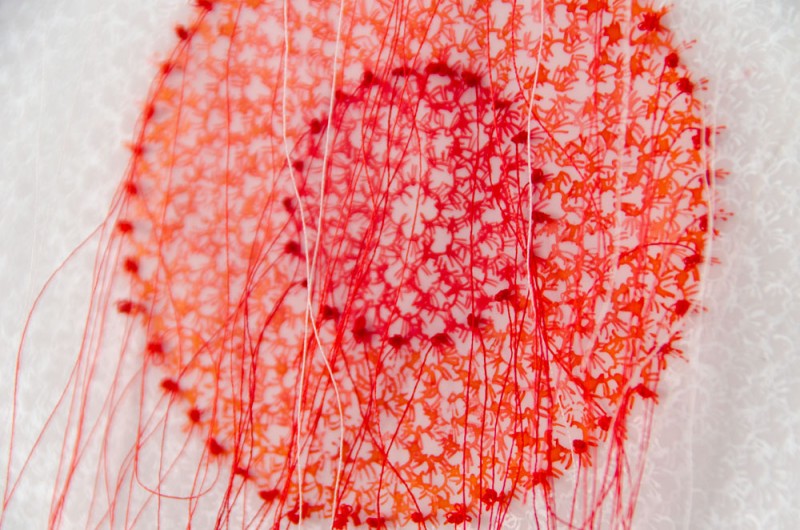 Seeking to give the two-dimensional work added texture, Solomon began weaving spools of thread through the work, breaking up the grid and giving it a three-dimensional look by leaving the spools to rest on the floor at the foot of the work. The creation of the doilies can be confused with a work of craft, but by the addition of the wooden spools threaded randomly through the work and ultimately reposing on the floor, the installation is transformed into an artwork with unending interpretation.

All together, “Sen,” is a masterwork combining traditional women’s craft, contemporary social practice, color theory, personal family history and decorative patterning. It is not to be missed.