“Beatnik Meteors,” the most recent exhibition at the di Rosa and the first in new curator Amy Owen’s collaboration-focused program, is an energetic mish mash of installation, performance, film and sound works by three groups of Bay Area artists. Christopher Füllemann, Bailey Hikawa, and Lisa Rybovich Crallé created a gallery-wide installation of sculptures and performance called “Talk My Language.” Paul Clipson made a 16mm film inspired by the di Rosa’s surroundings in Napa called “Autumn Dimensions.” He invited artists Joshua Churchill, John Davis and Chris Duncan to collaborate on the soundtrack.  Chris Duncan invited musicians to compose for his pieces “Platform” and “Classical Elements/Earth/Graphic Score.” The title, “Beatnik Meteors,” refers to the work of William T. Wiley by the same name, part of the di Rosa Foundation collection.  Wiley’s piece functioned as an informal time capsule of items from his studio in the 1970 and what Owen calls a point of departure for the show.  The title also suggests nostalgia for the creative pursuits of the 60’s and 70’s and a willingness to combine seemingly unrelated things to create something new.  In both cases the show does not disappoint. 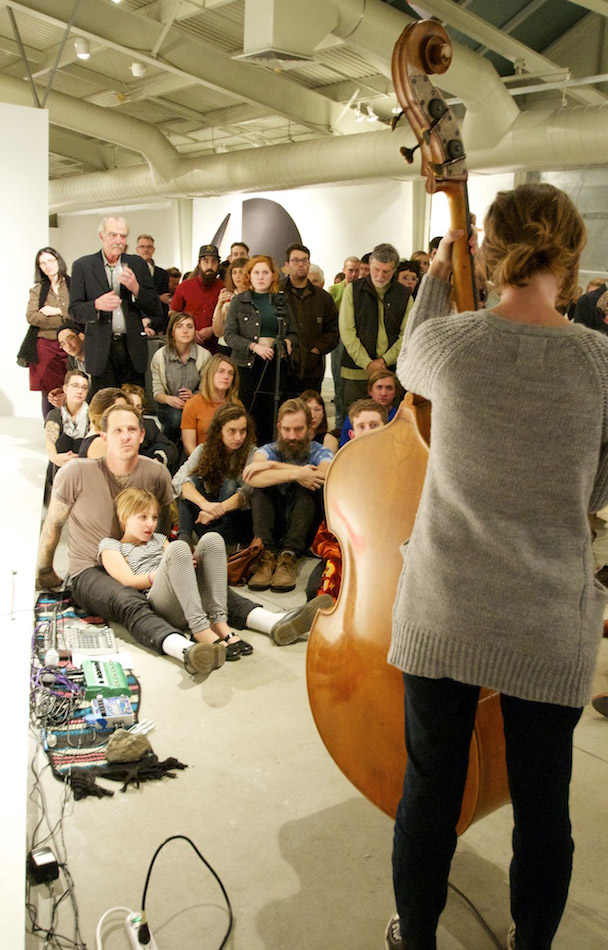 The collaborative premise and multi-disciplinary approach of “Beatnik Meteors,” created fertile ground for innovation and chaos, which came to fruition at the opening. The space was packed with art-goers, artists, a troupe of performers and multiple sound performances.  This spectacular presentation made it difficult to know ass from elbow, so to speak.  Put another way, I found it hard to isolate the work within the space, or to figure out who had made what or to know why things were happening the way they were.  While it bothered the purist in me– I wanted to know who was responsible for what, see things on their own in the space, etc – the blurred lines and frenetic activity were entirely the point.  This was a happening! 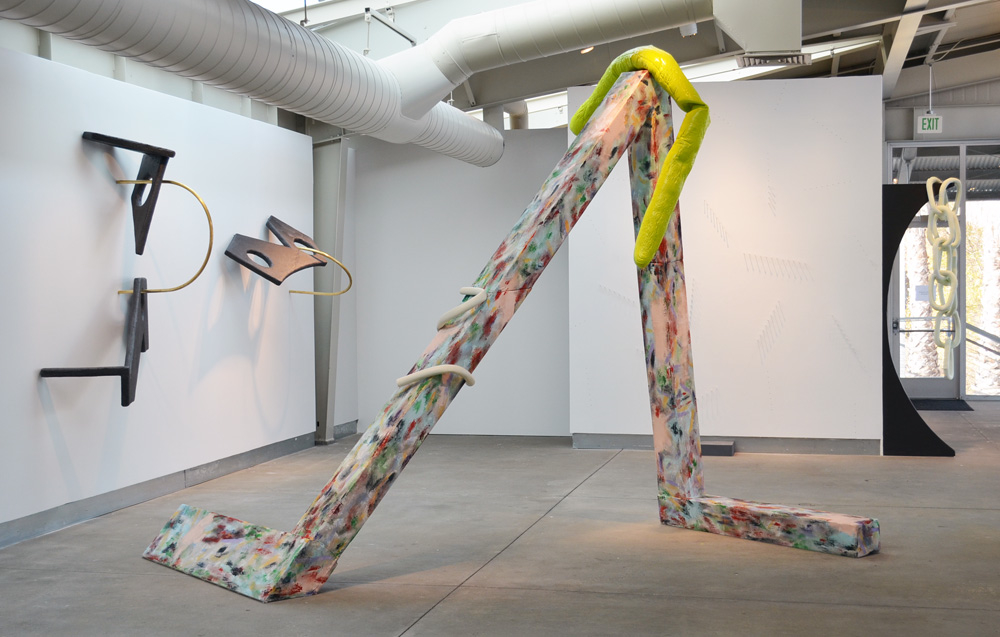 While the whole exhibition was welcomed in its energy and willingness to take risks, the highlight for me was the work in, “Talk My Language.”  Füllemann, Hikawa and Crallé began their collaboration as an exquisite corpse-like endeavor that gave way to a more free-flowing dialogue between artists.  The installation, a handful of floor to ceiling sculptures scattered throughout the space, invites the viewer to engage with the vocabulary of forms the artists have created.  Meanwhile, the title points to the process of negotiation required for the artists to create a unified work of art.  It was tempting as the viewer to walk around and try to guess who did what.   For example, I want to place the over-sized chains with Crallé, the curly-cue shapes with Hikawa and the black cut outs as Füllemann’, but it’s beside the point.  As with the exquisite corpse exercise, the finished piece functions best when the body works as a whole rather than a sum of discombobulated parts.  Since the artists shared a sensibility to begin with, namely Surrealist recontextualizations and a cartoonish approach to shape and color, their collaboration seemed natural and fresh despite the large scale. 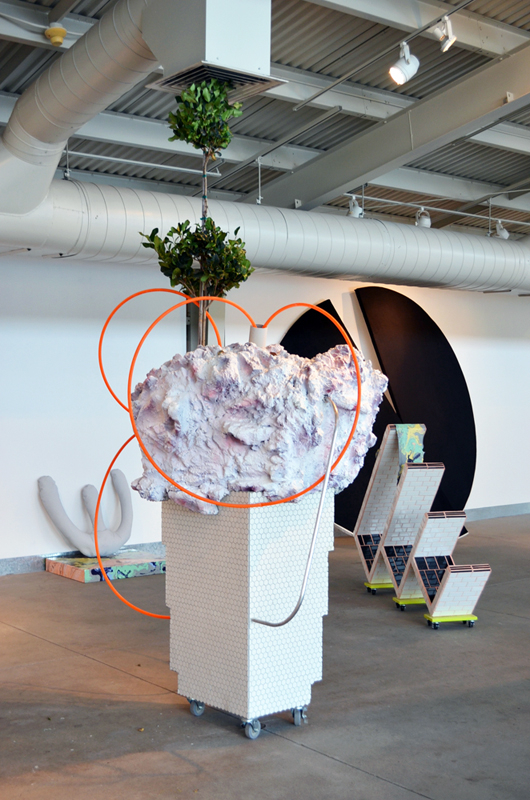 One of the more surprising combinations of materials is a podium-like shape set on wheels, topped off with a blobby mass that is sprouting orange rubber tubing, a metal bar and a fake house plant.  This piece has been installed so that the top of the plant rests under one of the industrial vents on the ceiling, as if fueled by the air coming out of it like some futurist biological machine.  Unlike some abstract sculpture which fails if it refers to the physical word, their work excels in its uncanny ability to remind you of multiple things at once.  Take for example the sculptures on either side of the plant-obelisk: on the left, a large beige ‘O’ lined with bright yellow; on the right, a series of geometric shapes stacked on one another.  Alternately they reminded me of a giant roll of paper towel, the surface of an Italian wafer cookie, a toilet seat cover, a lemon wedge and the ceiling of my elementary school. But, like symbols in a dream they remain open to the interpretation of the viewer. 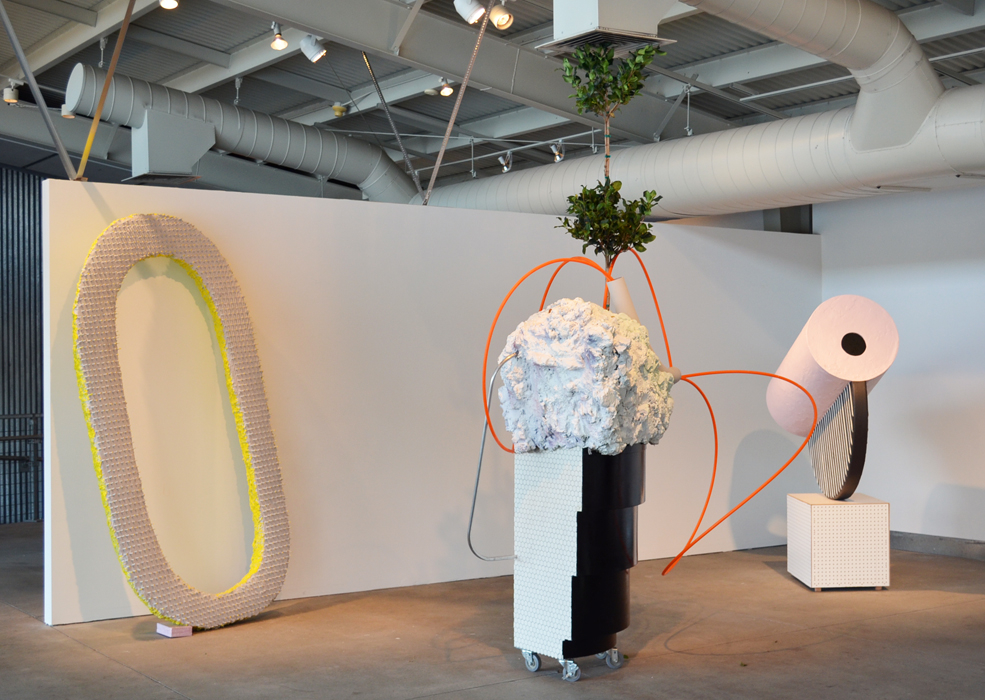 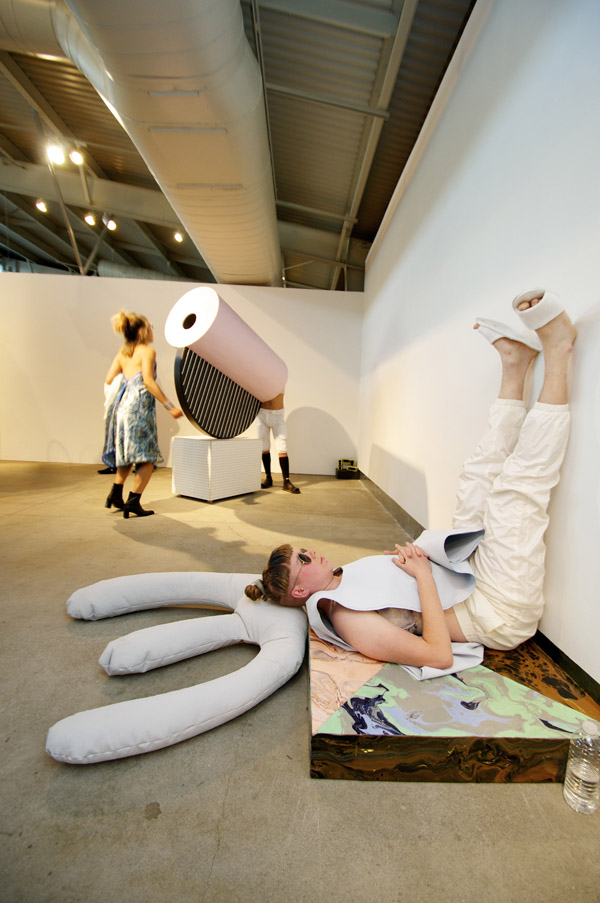 Throughout the night, a troupe of performers dressed like high-fashion space dwellers from the future circa 1964 acted out every prepositional phrase in the book- under, over, on, in, next to- as “Talk My Language”’s performative element. There was something charming about seeing artily dressed people lay or stand on sculpture in a fancy space.  Ultimately though, the performance felt static -like an afterthought rather than a pre-conceived aspect of the work because of the sculptures’ lack of mobility or function.  On the other hand, Chris Duncan’s “Platform,” struck the right chord (excuse the pun) between installation and performance.  His installation, a suite of wires strung from the floor to gallery wall, became fully functional as a string instrument that Belllouin and Bracken played during the opening. 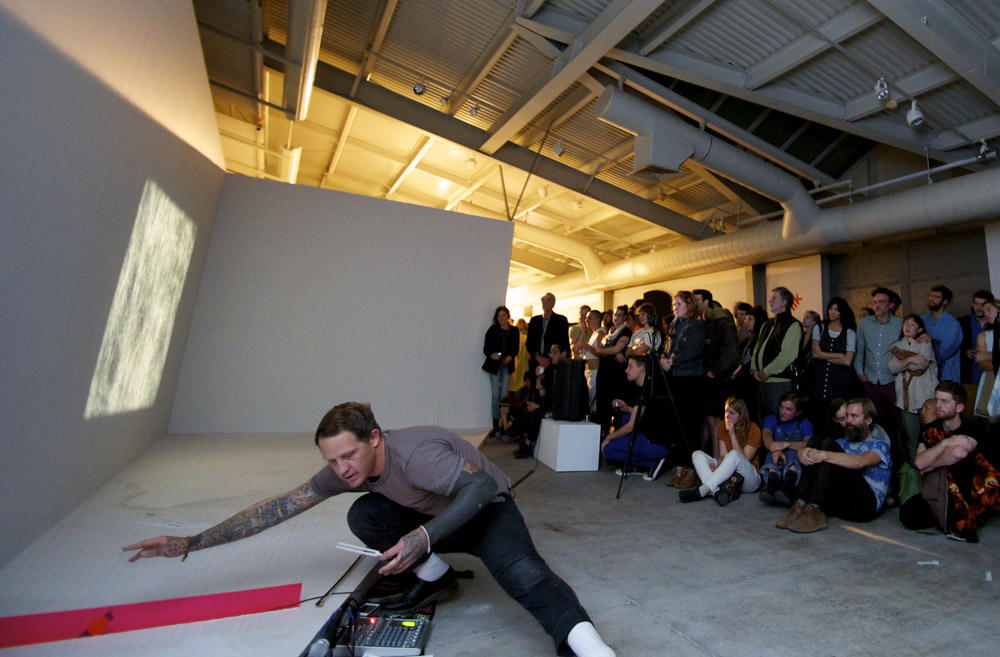 The exhibition essay opens with an irreverent quote by Bruce Conner: “To me funky objects are objects you make yourself or with your friends.  It doesn’t have anything to do with the making of art to be shown in galleries or museums.”  While the following text by Owen doesn’t address why “funky objects” are better than non-funky objects (maybe it goes without saying) or the fact that these funky objects were made specifically for the Gatehouse Gallery at the di Rosa, it does point to the quality of casual fun and free-flowing creativity that is infectious. After spending an hour in the space, you’ll want to go pull out your art supplies and make some funky stuff yourself.