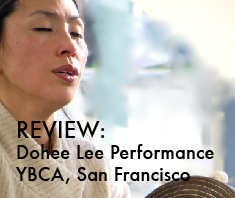 Myth and Mystery in the Grand Lobby 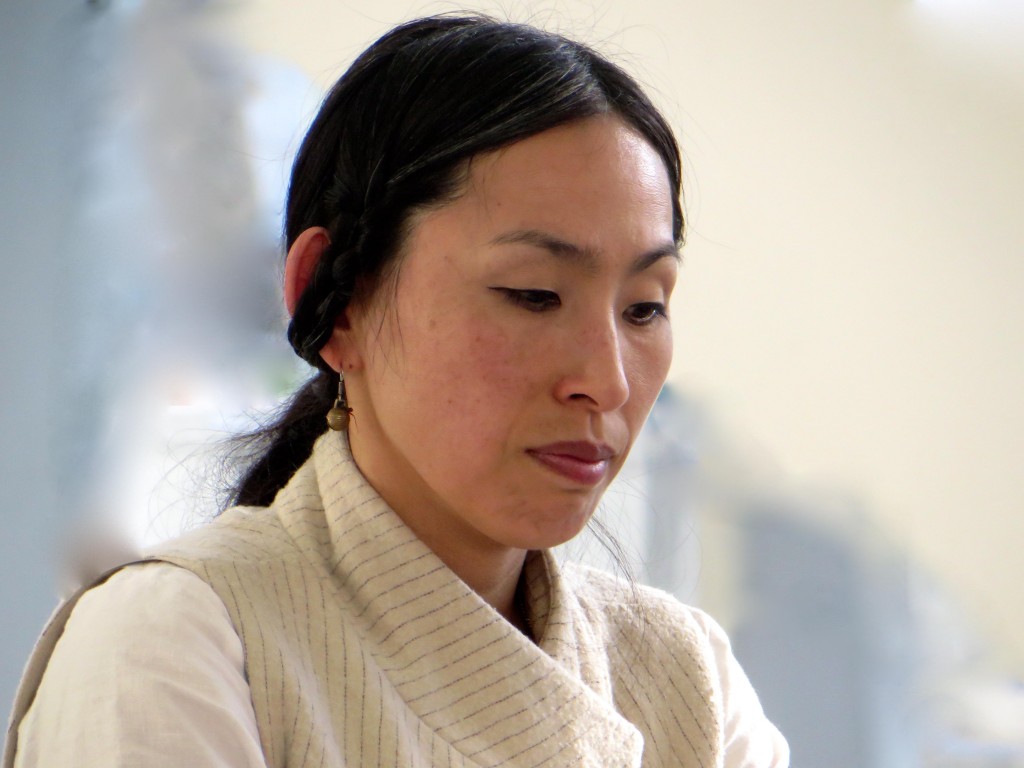 I went to Jeju Island on the southern tip of South Korea in 2001, shortly after 9/11 and the anthrax mail scare, to curate an exhibition involving international artists. During the course of my visit, I was taken to a series of volcanic tubes, which riddled the underbelly of the island. Above ground are scattered “grandfather statues” left behind by an unknown ancient civilization. Replicas are sold as tourist trinkets, and they continue to exude a presence over the island. Triangulated between South Korea, Japan and China, Jeju is a breeding ground for isolation, myth and mystery.

Dohee Lee hails from Jeju and has cultivated the full range of the island’s mystical aura. She is an acclaimed dancer, who calls the Bay Area home. But she is also a self-proclaimed shaman trying to cure the ills of urban life through ancient ritual. We share a passion for the work of Anna Halprin, who has inspired Dohee through her study of dance as a healing art, effecting concrete change in both the performer and the participant.

When Dohee Lee sits herself at a simple table in the Grand Lobby of the Yerba Buena Center for the Arts and offers the chair opposite to anyone willing to engage with her, one cannot help but be reminded of Marina Abramovic’s durational work, “The Artist is Present,” performed at MoMA, New York, in 2010. There are major differences. Abramovic offered herself up as sculpture, a mirror the participant could look into to discover and divine by intuition and/or telepathy. Dohee Lee takes a more active role in the melding and mending of her collaborators.

Before the guest sits at the table with Dohee, they are instructed to choose a card with a short statement and stand in line to await an audience with the artist. Once seated, they share the text they have chosen, engage in brief conversation with Dohee, and randomly select from a bundle of different color flags, which like the selected text, indicates a direction the artist will take. This may include chanting, drumming, speaking in tongues, calling upon her troupe of instrumentalists, song, touch, tears… 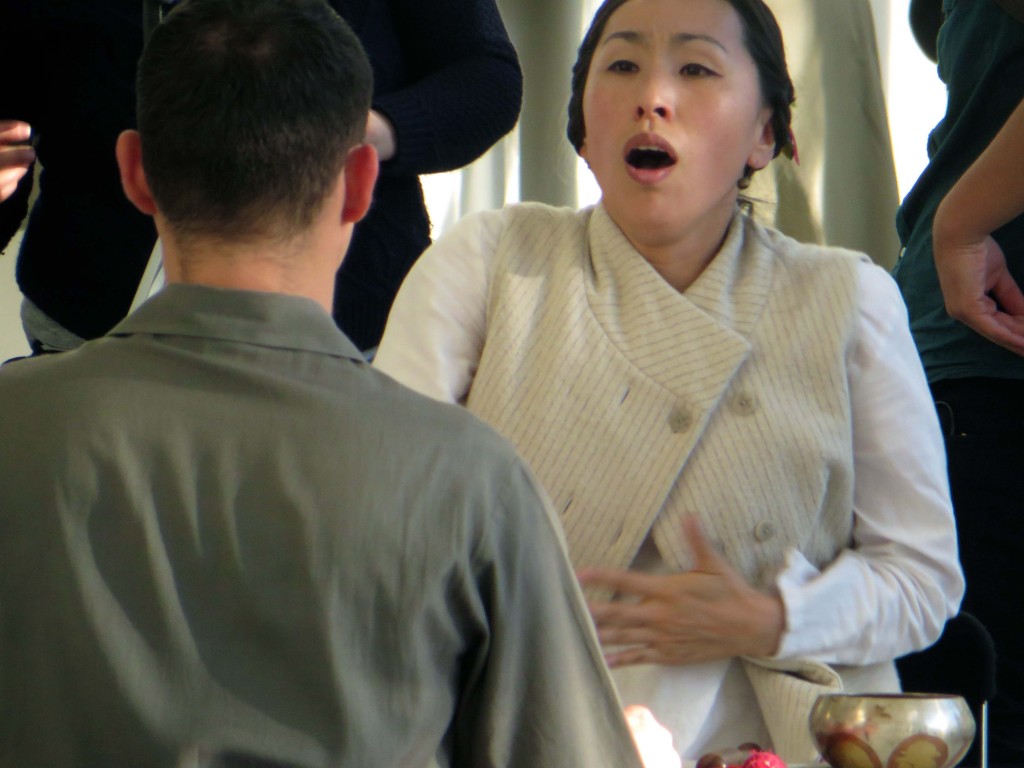 After the interaction with Ms. Lee, the guest takes the text and places it with the previous assembled notes at the base of an alter. Their reactions vary. In the two plus hours I was present during the eight-hour performance, I witnessed a hip twentysomething Asian woman burst into tears, a Marin veteran of sensitivity training break into a Shaker frenzy, grown men cry, with no end in sight to the line of those who wanted to participate in a cleansing, a healing, a way forward for those attuned to the intricacies of the ceremony.

Ms. Lee was ably accompanied by instrumentalists Adria Otte, Suki O’Kane, Jason
Ditzian and Marshall Trammell. They either collaborated providing an aural framework for the work, or were called upon by Dohee for a specific need, in which they would individually approach the table and take a more active role in the proceedings. 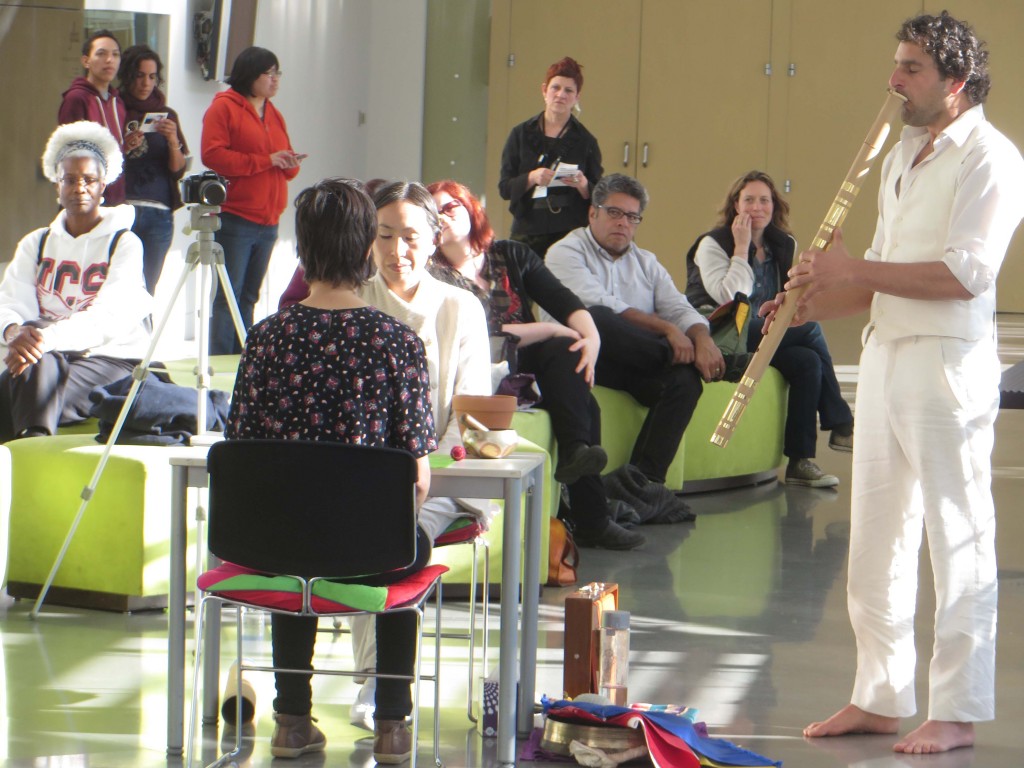 Dohee Lee is known primarily as a dancer, but like her mentor, Anna Halprin, she eschews labeling and embraces inclusiveness.  The craft of the shaman demands movement and voice control, costuming, set design, empathy and a learned grace. Dohee Lee has mastered all of these and more.

“ARA Gut (Ritual of Ocean),” is a series of three works in progress Dohee Lee is performing at Yerba Buena Center for the Arts. The first was a summer ritual performed in July 2013. This work, “Mago,” is being followed by another in the spring of 2014. The “community rituals” are free and open to the public.

For more information visit the Yerba Buena Center for the Arts, San Francisco.