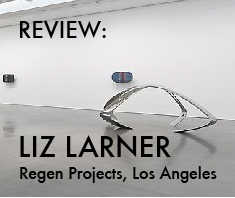 California (Sacremento to be exact), native, Liz Larner presents a new body of work at Regen Projects in Los Angeles, but what is happily off-kilter about this bold, sculptural presentation, is that coupled with it viewers find a side gallery in which an earlier selection of notably smaller, object-based works acts as an unusual and telling counterpoint. 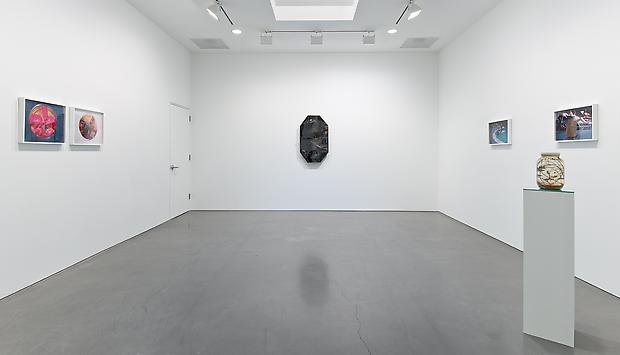 Liz Larner, installation view (side gallery). Courtesy of the artist and Regen Projects.

Larner’s new works from 2013-14, are mostly, if not noticeably large then still physically prominent.  Two large, free-standing metal sculptures act as anchors amongst the many ceramic wall pieces that surround them.  Uncharacteristic of Larner’s signature friendly, colorful, somewhat playful forms, these two works diverge into a cold and solid aesthetic.  “V (planchette)” (2014), whose smooth aluminum surface is painted a chalky black, swerves from wide at its base to slight at its middle and swells again at its top, resembling an hourglass shape when seen from a certain angle, whereas “X” (2013), is just that, in mirrored and polished stainless steel, with its thin, shiny strips arched upwards, criss-crossing parallel to the surface of the ground, each bending under like strange feet or paws to support itself.  In their seeming lack of the kind of detail or warmth that we associate with much of Larner’s work, there is still something interestingly personified about each sculpture, which allows them to at once appear stoic and and the same time oddly figurative and thus in motion. 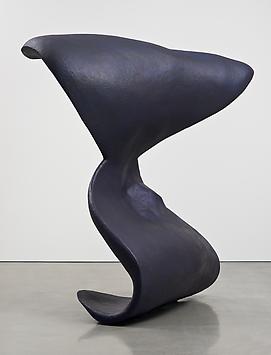 In a somehow familial approach, the wall pieces that accompany these two large sculptures seem to frame or host them within something that we can more easily recognize as Larner’s homespun style.  Horizonal oval shaped ceramic slates mounted and protruding a few inches from the walls are installed around the sculptures and alternate from dark vibrant earth tones to creamy light gradations that connote pristine marble surfaces. 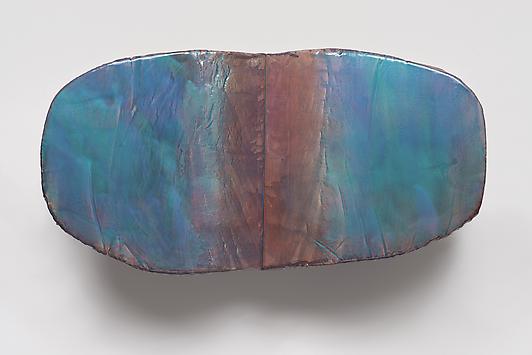 Liz Larner, inflexion, 2014. Courtesy of the artist and Regen Projects.

In the side gallery we get a sense of Larner’s found object based installation as well as her photography, which appear to be interrelated.  Photographs depict rather common scenes in the backgrounds – a man stepping out of swimming pool, a woman laying on a lawn chair – but in the foreground random and clearly authored objects such as a glass jar full of some kind of grass or weeds and a pear shaped beaker filled with a mysterious dark red liquid, both sitting atop some form of pedestal, which highlights their representational nature, are interjected. 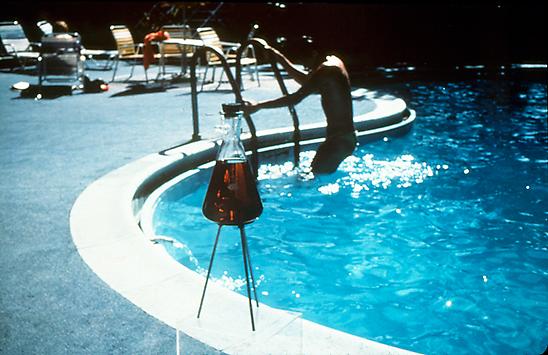 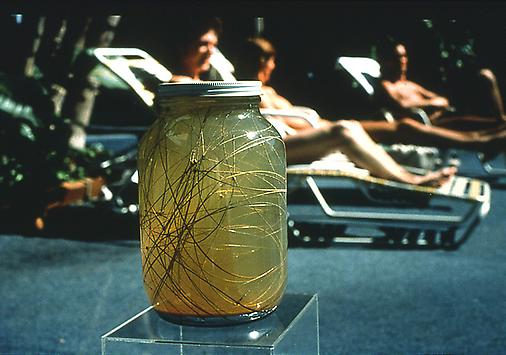 These same objects, among others, are then also on display, presented on their same pedestals, in the small, adjacent gallery.  Though it is difficult to find the relationship between “Liz Larner” 2013-14, and the Larner setting up snapshots at the Tropican Motel in the late 1980s, perhaps that is precisely the point, and it certainly makes for a more complex introduction to new work than simply: “Liz Larner”, new work, as so many galleries portend.  Instead, we get Larner’s new works, but with a sort of addendum or footnote attached, that gives us access to a small portal through the scope of her practice as it has been in the past and what it has currently developed into.  Furthermore, it allows for this installation of new and brazen sculptures and ceramics to feel much less final, not that they ever really are, but we see that rather than considering the new work as a declaration of what is happening in Larner’s work right now, this show is merely a pit-stop on the long and winding road she has been charting for herself for the many years, and which will surely take another unexpected turn any day now.