“He was alone. He was unheeded, happy, and near to the wild heart of life.”  That quote is an excerpt from James Joyce’s “A Portrait of the Artist as a Young Man,” and the inspiration for the current group show at Stephen Wirtz Gallery, “The Optimists.”   The title, despite its clear source material, made me wonder “Optimistic in relation to what?”  The artists in the show – Maysha Mohamedi, Rebecca Morris, Ruby Neri and Laurie Reid – seem to embrace, if not wildness exactly, a passion for the physical, for the idiosyncratic. But what does a positive or “optimistic” attitude mean in relation to their work?

One might say the exhibition is optimistic about the fate of the individual in 2014; that despite the proliferation of digital media, the mark of the hand still holds import. In a purely formal sense, “The Optimists” seem to have embraced the hand and the body for both its power of universality, as well as its limitations. 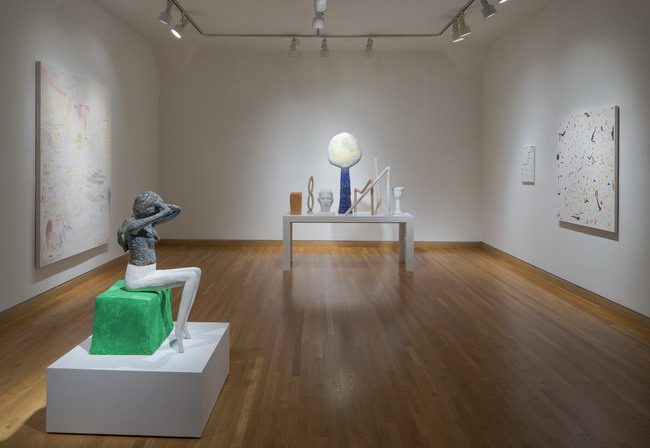 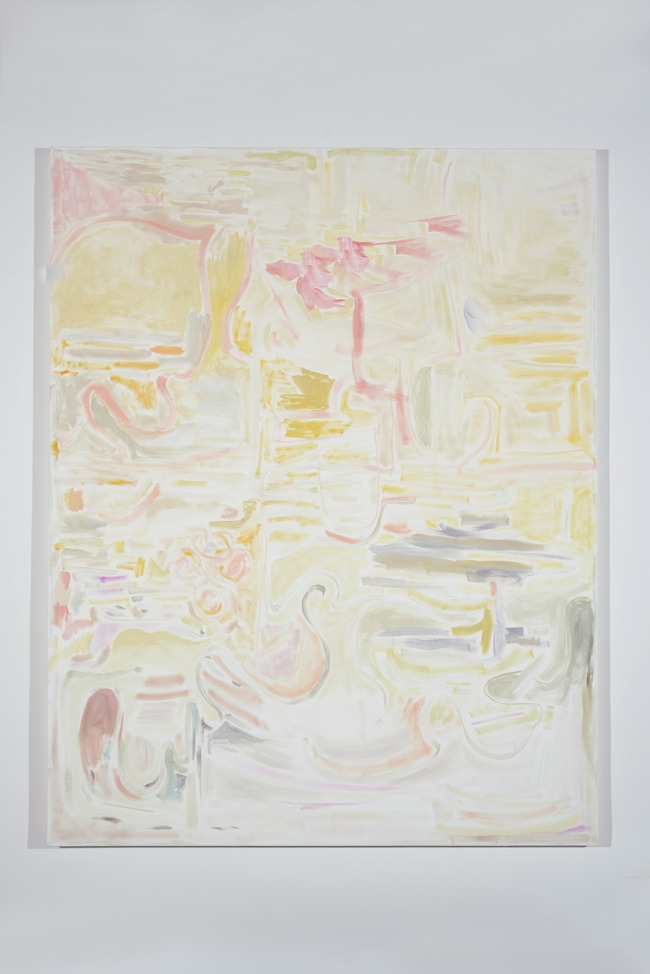 As you walk into Stephen Wirtz the room to your left is installed with works by Laurie Reid and Ruby Neri.  Reid’s leisurely-looking oil on canvas plays off Neri’s raw, paganistic ceramic and plaster forms.  The paintings circle around Neri’s “Untitled (table with sun disc)” like rocks at Stonehenge; Neri’s sun disc sculpture as the centerpiece with a plaster totem of cobalt blue and a round yellow disk at the top, both painted hastily.  One of Reid’s paintings, in a gesture of synchronicity perhaps, is titled “Little Sun.”  The lyrical brush marks in the work are fresh, like a sketch by Matisse with the a palette that, for lack of a better word, looks sunny with its lemon yellows, light pinks and sea foam green.  Reid’s painting “The Optimist,” the supposed namesake for the show, is a simple composition of lines and brushy forms that move around one another like an awkward couple on a first date, careful not to touch.  Reid’s paintings are visually appealing and seem like they were fun to make.  Evidence of pleasure on the part of the artist, and as an offering to the viewer, is something that is often missing from the work shown in San Francisco galleries.  It was nice to see work that was unabashed in its self-enjoyment without being overly self-indulgent. 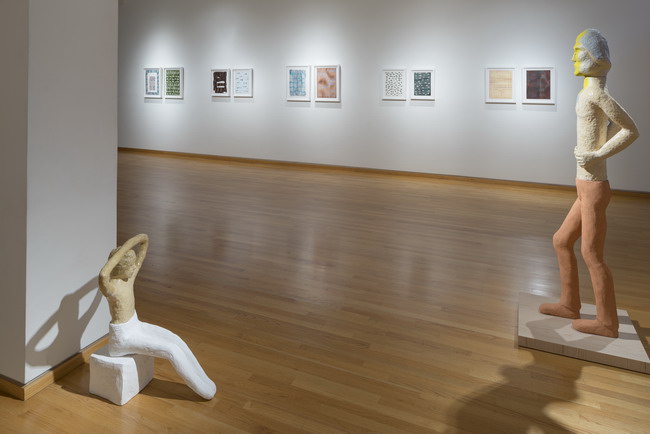 Neri’s larger ceramic figures “Untitled (dark sitting girl),” “Untitled (seated figure)” and “Walking Man (yellow face),” reminiscent of some of Kiki Smith’s figurative work, point to some unexplained narrative, as if they are characters in a ancient folk story.  In general they are a little too explicit for my taste.  I like that I don’t immediately understand what I’m looking at with her other two pieces in the show, “Untitled (table with sun disc)” and “Untitled (table with yellow face),” and am forced to piece together the puzzle of objects.  But in all her works, Neri constructs a narrative that is open-ended enough for the viewer’s mind to wander.

And among other things, this show is about that: following the way that the artist’s mind has wandered to create the work and allowing, in its open-endedness, for your mind to do the same. None of the artists depict the windy pathways and back corners of their subconscious with more aplomb than Mohamedi in her large, free-association paintings that take up most of the back gallery.  The paint, applied with both brush and fingers, is transparent as it moves over her panels; her colors layer over one another but rarely mix.  The glossy finish goes on slick, without being “slick.”  Like a Cy Twombly with finger-paints, her gestures are at once confident, sloppy and often entertaining. 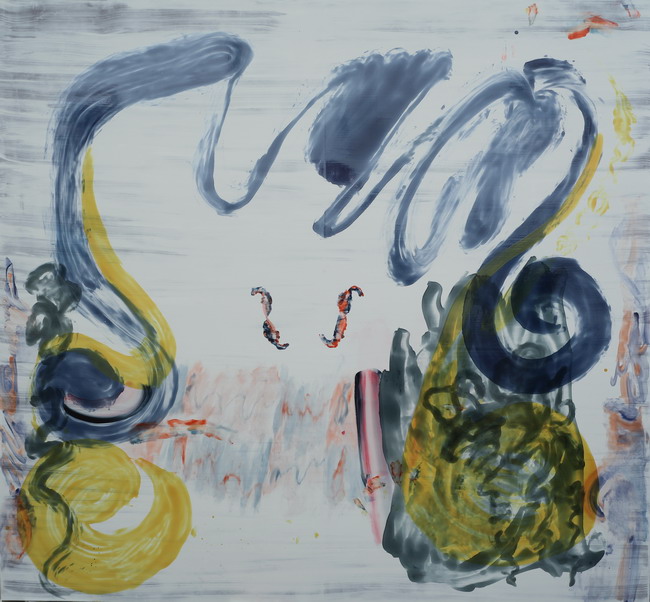 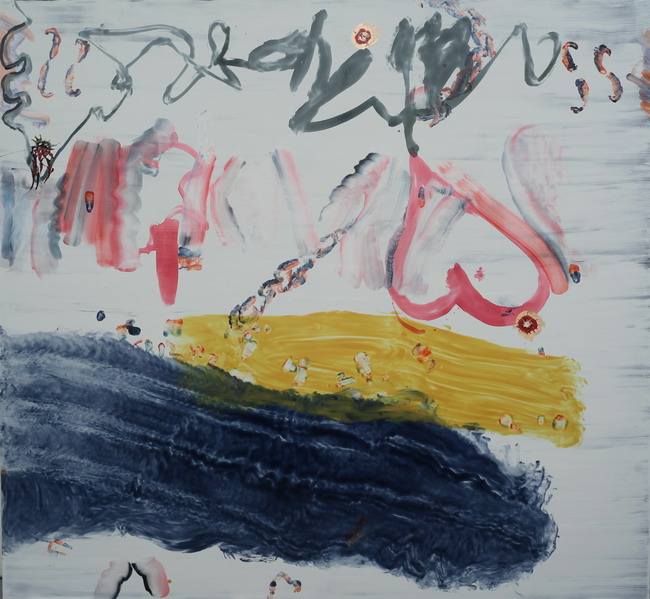 Between Mohamedi’s furious scribblings and vocabulary of coded symbols- hearts, babies feet, S’s and other personalized hieroglyphs- there is always a story in the work, but one that does not reveal itself immediately.  In one of her newer works from 2013, “Middle West and East,” Mohamedi contemplates, in addition to her painterly concerns, her identity as an Iranian-American.  Set on a masonite panel of light gray, the composition is split down the middle with approximately mirrored “S” shapes on either side.  These curly-cues look like decorative architectural molding or the letter “S”. While it’s not clear exactly what was intended, Mohamedi seems to be doing life-related calculus on the panel, weighing out her options through compare and contrast.  In “Rx for Finessing Fate,” a watery blue mass seems to move its way across the surface like fate itself, a nebulous creature that exits the frame as quickly as it appears. This panel is audacious in its representation of an upside-down heart that stands out against the other less-identifiable marks.  Mohamedi seems to be pointing to some great lesson learned without revealing her secrets. 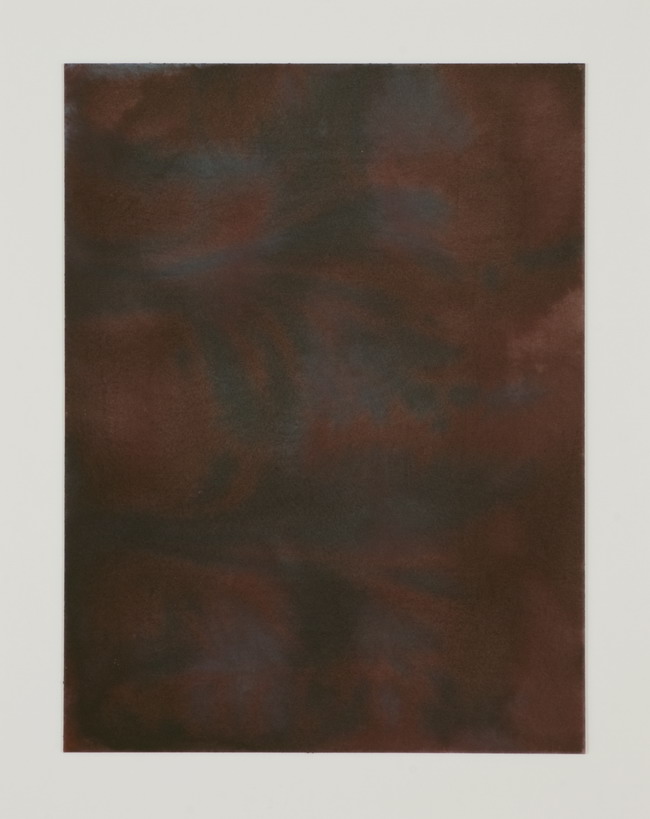 Rebecca Morris’ watercolors, a departure from her usual works on canvas, are fluid in style like the other works in the show, but disappointing in their lack of complexity. Her works on canvas are typically more challenging, the colors less easy and the shapes more laboriously considered.  Except for her piece from 2012, “Untitled (199-12),” which has a heavy layering of moody purples, greens and blues, the pieces seem to be studies for future works.

I left the exhibition wondering if the artists were all optimists as the title claimed, or if their seemingly pleasure-filled work was the impulse of darker minds seeking a happier truth.