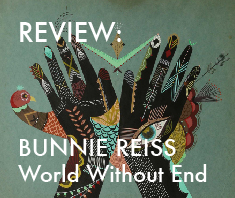 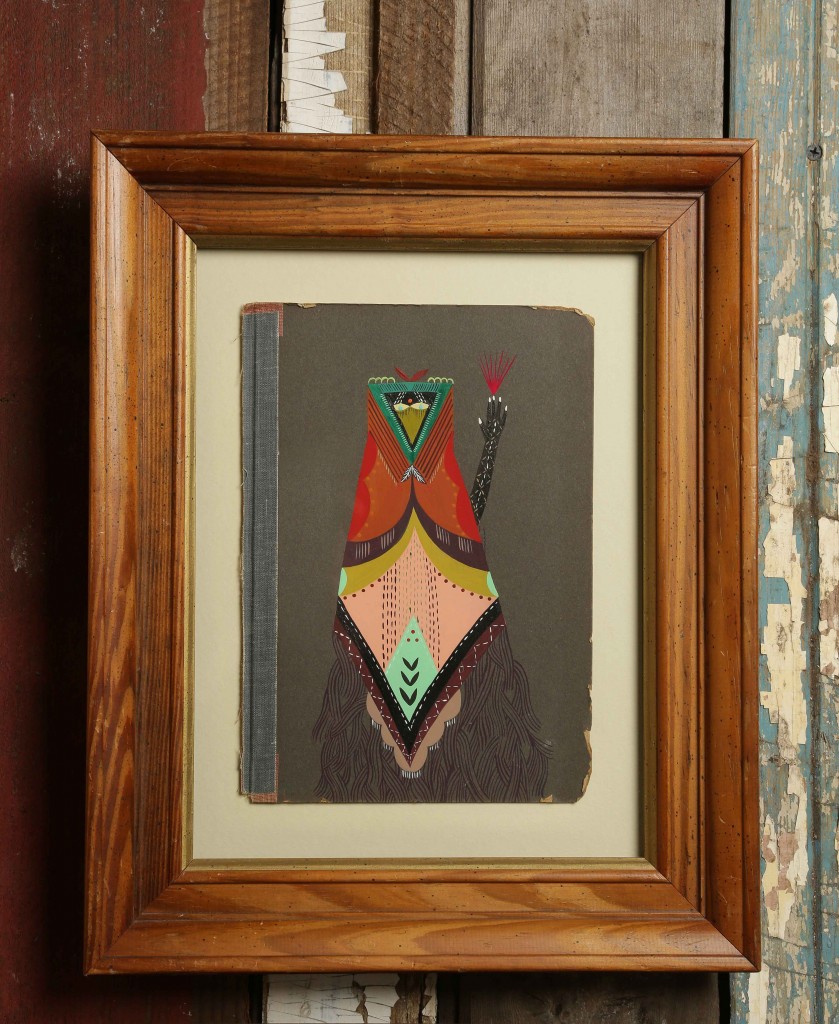 Bunnie Reiss. Courtesy of the artist and Studio Redux.

Of all of the aesthetic attributes that have fallen out of favor during the past fifty years, charm is perhaps the one that has attracted the least amount of attention, no doubt because of a belief that a charming work of art might somehow signify a lack of serious purpose on the part of the artist who made it. But now we live in the age of the art fair, meaning that works of art have been relegated to the category of being more or less randomly configured and unserious looking stuff, each earning their identity by way of seizing upon clear points of differentiation from all of the other stuff with which it competes for attention and electronic fund transfer. So, in the age of the art fair, we get big stuff, small stuff, pseudo-intellectual stuff, eye candy stuff, technically accomplished stuff, all calling themselves art while failing to embody any idea larger than their own novelty, all-the-while mirroring the mercenary values of that most charmless of social organizations, the one that calls itself the artworld. 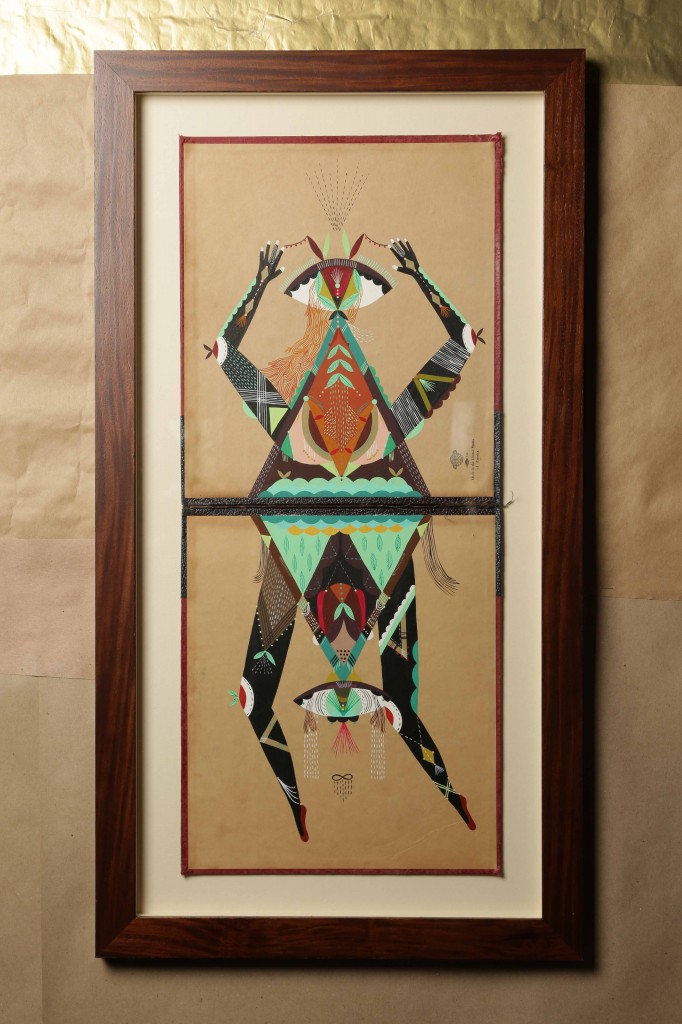 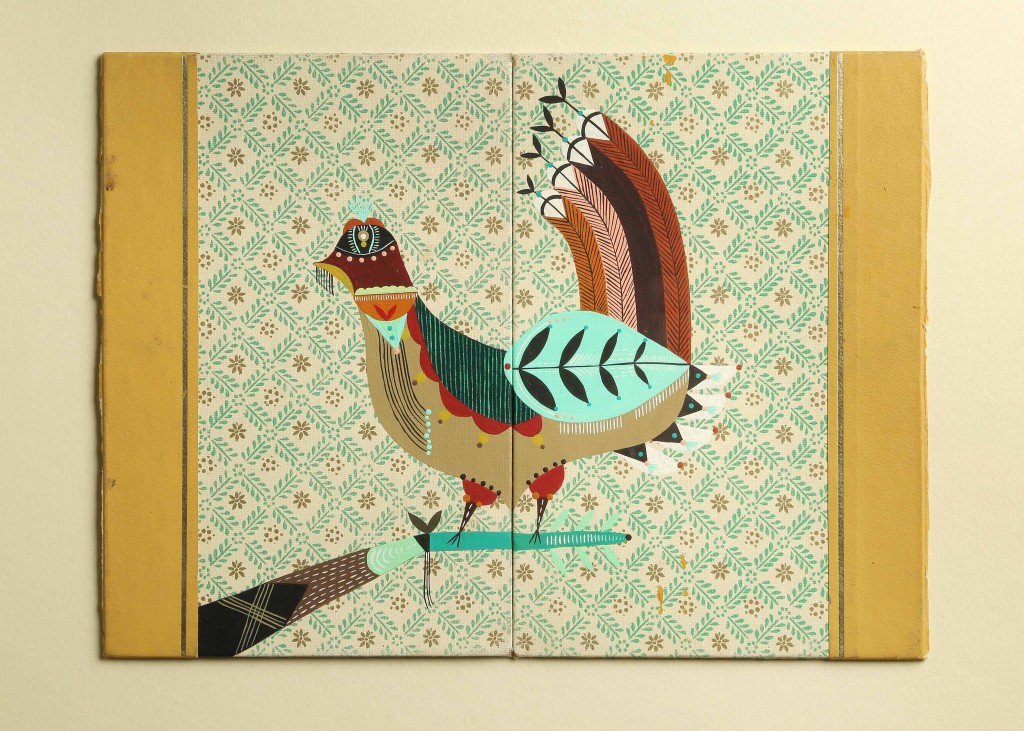 The series of 23 recent paintings by Bunnie Reiss currently on view at Redux are nothing if not charming, and in fact, they are idiosyncratically so—inviting the viewer to look and look again at how they balance that which is obvious with that which is subtly nonsensical. Each of these acrylic-on-paper works is small, and each is awkwardly ensconced in a discarded one-of-kind picture frame that has been repurposed from an earlier life. At first glance, these works seem to be intimately scaled collages made from brilliantly colored cut paper that was meticulously pasted together, but in fact, the crisp colorful shapes one sees in these productions are formed of carefully applied acrylic paint that has dried into flat areas of color that float above the textured paper to which they have been applied. In several cases, that textured paper has an antique provenance: for example, there is “Mystical Hand Magic” (2013), which is a painted on two old timey record album sleeves. In other cases, the paintings are executed on faded colored construction paper, highlighting the contract between the bright opaque paint and the muted and porous surface to which it was applied. 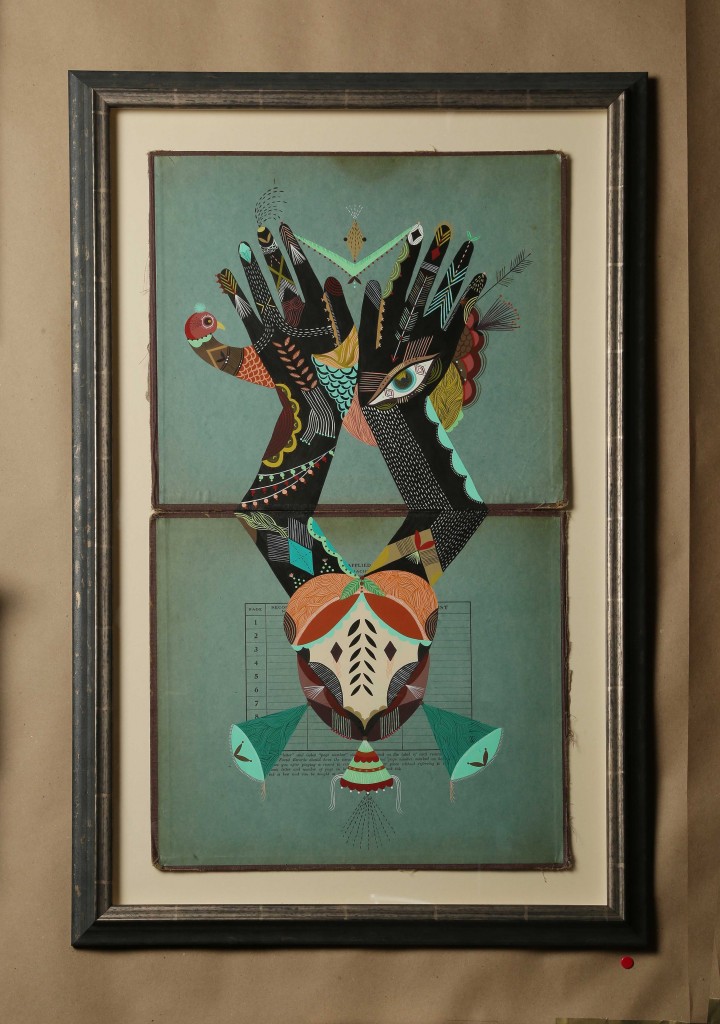 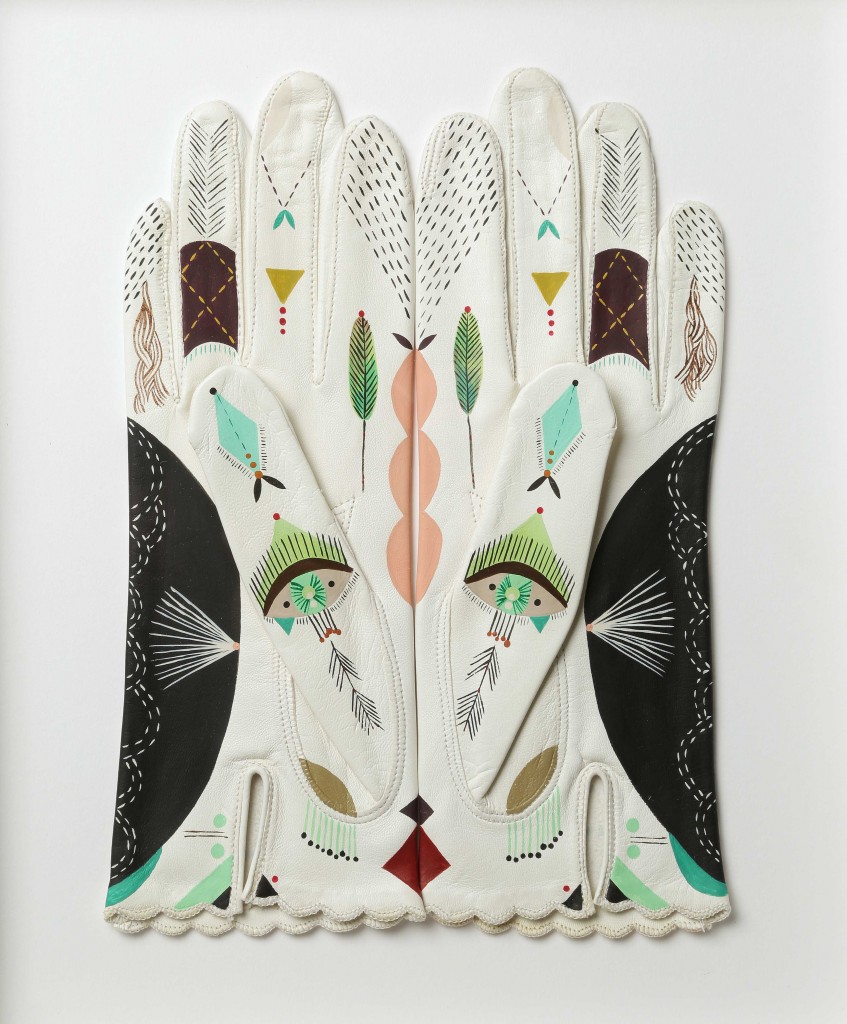 A recurring set of iconographic themes weaves through Reiss’s paintings, sometimes looking like a mirrored doubling of an image that bespeaks popular Mandala motifs recast as Rorschach fantasies. A good example of the latter is a work titled “Double Kitten Glove” (2013), where feline features a revealed from paint was applied to a pair of white leather gloves. In other works, hands with stylized eyes are pictured resting atop dancing pairs of legs, all festooned with floral fantasies. The ornamental motifs are often quite intricate, but the real pleasure that they offer lies in how off-kilter they are, bespeaking, or mis-bespeaking an odd amalgamation of visual influences. 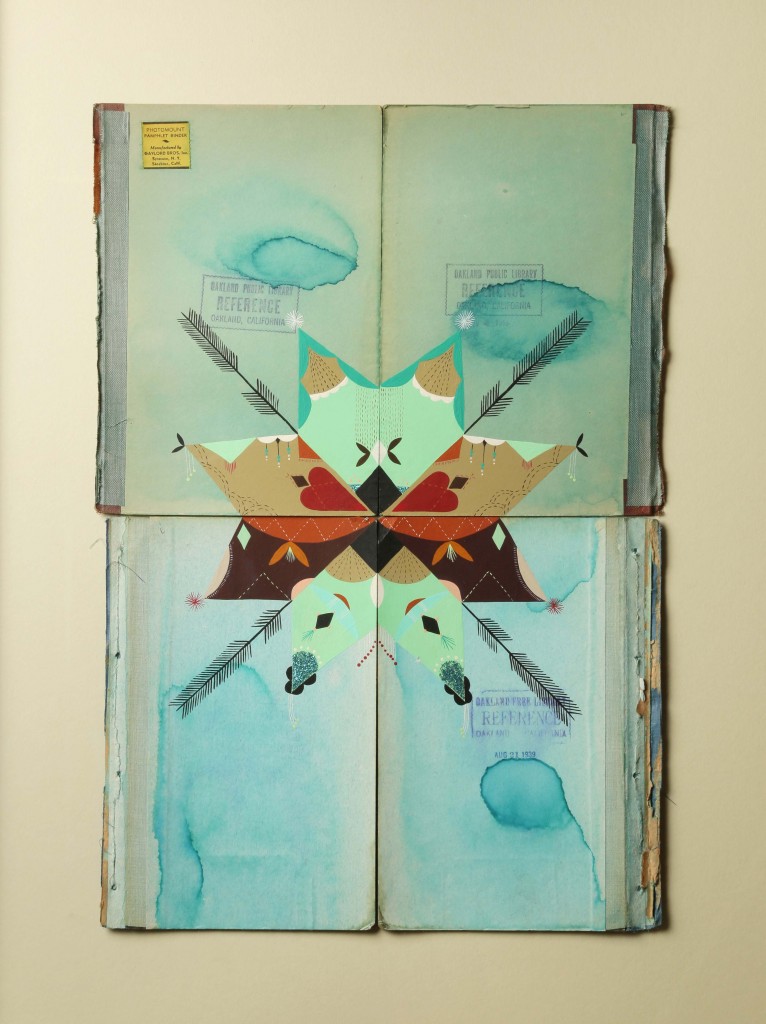 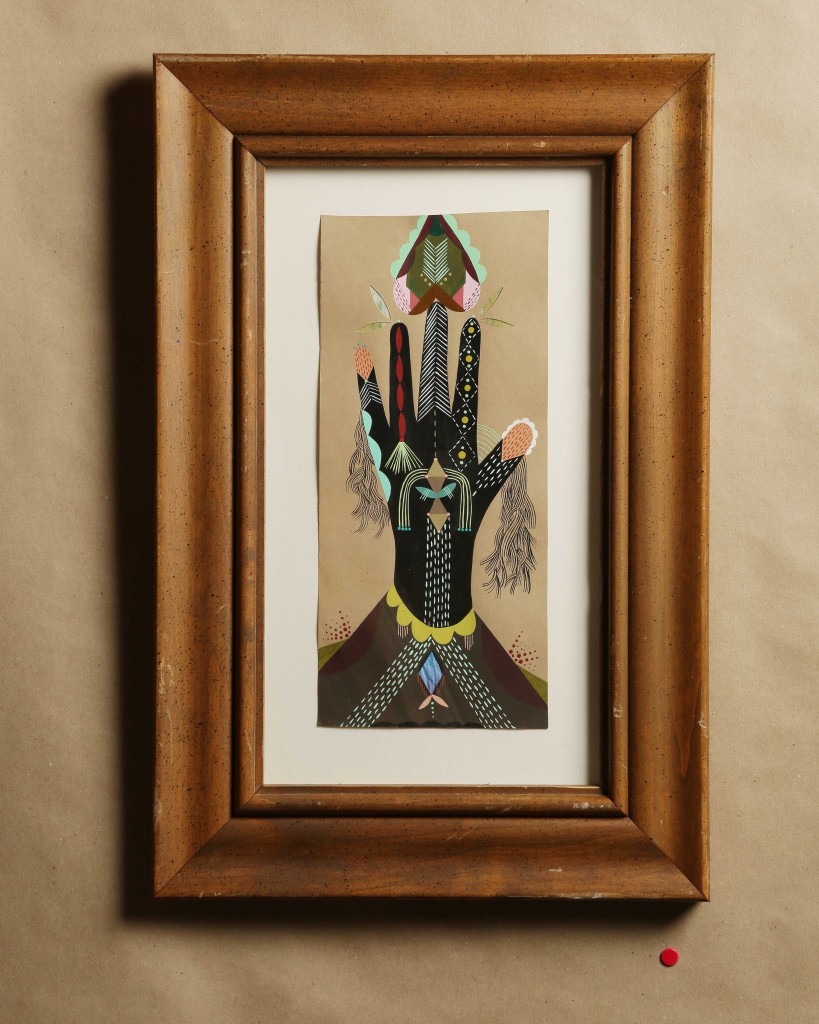 The information provided by the gallery tells us that the source for these stylizations reflects an extended trip that the artist took to India earlier this year. Certainly the color combinations and stylized ornamentation of the works seems very much a piece with traditional Indian art, as well some contemporary folk and popular culture motifs. It is tempting to think that Reiss’s work has also been influenced by the work of some contemporary Indian painters. I can think of a few whose works have turned up in recent iterations of Documenta and the Venice Biennial—Nalini Milani and Payne Ganesh for example, but given the recent heating up of the market for contemporary Indian painting (and the concomitant cooling down of the market for contemporary Chinese painting), these names are but two of many others that have come into international visibility. Of course, in making this point, we have to also open the discussion up to the thorny issue of the ethics of cultural appropriation. But in doing that, we also have to admit that in this crazy mixed up globalist artworld there are many different kinds of cultural appropriation in service to many different conscious or sub-conscious motives, all making it very difficult to wax indignant about real or imagined abuses of cultural stereotypes. Reiss’s paintings seem genuinely and guilelessly respectful of the visual traditions of the Indian subcontinent, making it hard to detect any colonizing imperative in the work included in this exhibition. 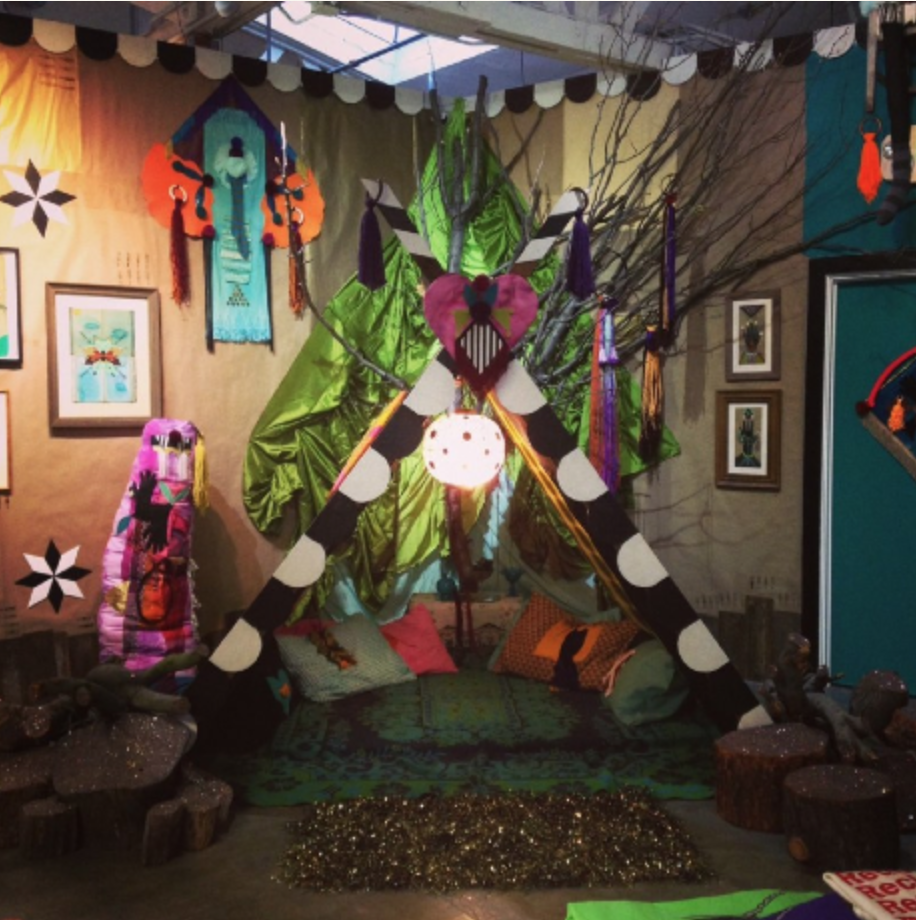 Installation view. Courtesy of the artist and Redux Studio.

I found myself wishing that some of the other works presented in this exhibition were as delightfully charming as the small paintings. Also presented here were a series of quilts made from stitched fabric, each coming off more like conventional design objects more than anything else. More interesting were the quartet of three dimensional works that were also made of stuffed, stitched fabric, these seeming like homemade stuffed animals of a vaguely sinister stamp, two of which incorporating old chairs into their configuration. The largest piece in the exhibition was a small A-frame hut made out of fabric and cut wood, filled with handmade accouterments that suggested the humble residence of some ascetic guru. Maybe I have seen too many temporary shelters set up in art galleries that were intended to signify the idea of nomadism, which is why I found it difficult to get too excited about this particular architectural fantasy. On the other hand, it also suggested itself as a kind of fantasy studio in which the aforementioned charming paintings may have been produced, providing a visual back-story pointing to how the artist may have adopted a complex artistic persona in advance of executing this series of paintings.