Øgaard is a small gallery in Oakland that received the Southern Exposure Alternative Exposure grant for 2013. Focusing on textiles and originally delineated as small studio spaces for artists with a gallery in front; Øgaard is mounting solo shows throughout the entire space since receiving the SOEX grant. The newest solo show is “Lazy Bones” by Lisa Rybovich Crallé. Crallé’s work is following the current visual vocabulary of 1980s consumer-culture aesthetics coupled with classical period architecture and statuary references. Her practice is by no means “Lazy Bones” as the title states, but perhaps a better reference for this work is the Delphic maxim techni chro which translates both as “use your skill” and more literally “colored shapes.”

Intersecting the exhibition are four large fingers. Two are very large in fact; at approximately ten feet long and 6 inches in diameter. One is bright yellow with a cobalt blue fingernail, and the other is vibrant fuchsia accented with a teal fingernail. The fuchsia finger bisects a wall and comes out the other side into a smaller room where the length of the finger points, touching the floor at a diagonal. Two smaller fingers, yet also larger than life at approximately four feet tall are crisscrossed in another room. One is mint green and the other is black, both with neon pink fingernails pointing at the floor. The fingers are awkward and loud and seem to indicate a ritualistic function like playthings for embarrassing public gestures. All of these giant digits are dismemberment as seen through the eyes of humor that longs for megalithic structures to be once again reunited with architecture through monumental comedies of error. 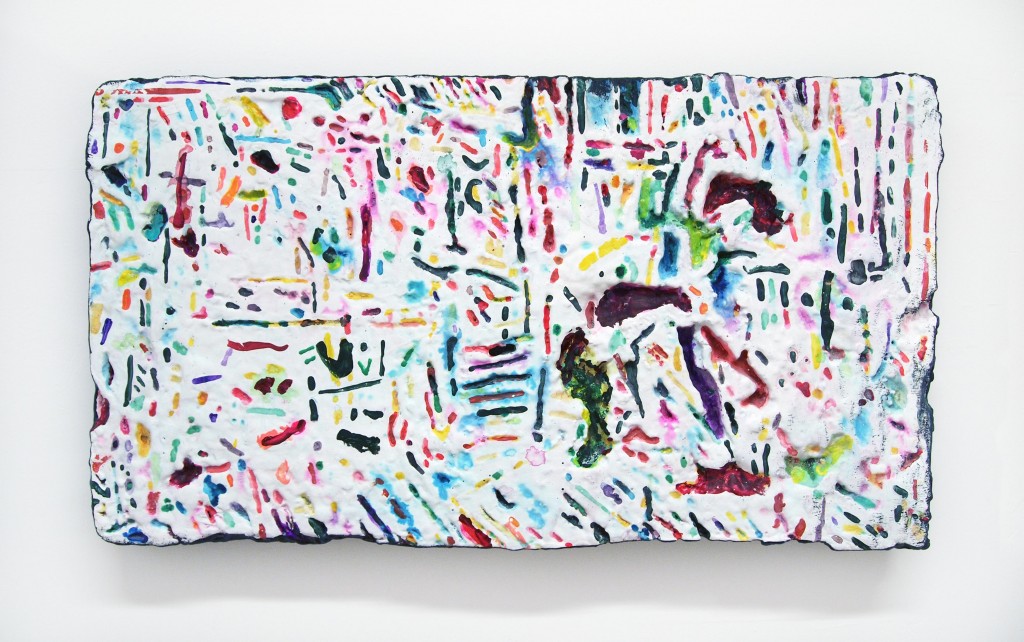 Accompanying the fingers are numerous bas relief carvings that are also playful in their color palette, yet subtle and poetic in detail. The surface has a poured and thick, smooth and luscious quality. Each piece requires close inspection to find the layers and stains of color that seep through to the front. In many cases, hot pink and bright robin’s egg blue hover below the matte white surface like a futuristic yet-to-be-discovered agate or phosphorescent amber. The series are called “Tablet”; the sides are treated with black liquid rubber giving the appearance of broken stone. Overall, the solo exhibition is focused, yet teeming with experimentation and a dedication to both craft and conceptual rigor. Through her practice, Crallé manages to jut into the pervasive classical abyss and come out the other end in modern times.

Next post SFAQ Pick: "From the Sky Rivers Look Like Snakes" solo exhibition by Jason Jägel at Gallery 16, San Francisco.