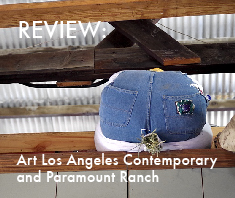 This past weekend in Los Angeles was packed with action for art-goers.  Not only did Art Los Angeles Contemporary (ALAC), host the fifth edition of its international art fair at the Barker Hanger, Santa Monica Airport, which also included a constellation of talks, walk-throughs, performances and collaborations both on-site and at other venues throughout the city, but MOCA Geffen also held the Printed Matter New York Art Book Fair, and a brand new fair, Paramount Ranch, was conceived.

ALAC, which this year expanded to include more international galleries, as opposed to its previous standard of half Los Angeles galleries, held a private opening on Thursday night.  The event attracted many of the usual suspects, (Jeffrey Deitch, The Hammer Museum’s Ann Philbin, LACMA’s Franklin Sirmans), along with countless gallerists, collectors, advisers, artists and writers who created a complementary pastiche of L.A. locals and visitors from New York and far beyond.  The opening also featured an LA><ART produced performance by L.A-based, EJ Hill in which the artist, tuxedo and all, performed classic jazz songs infused with excerpts from seminal Feminist texts next to a white piano in the center of the lounge/bar area.  While performance continues to be among the most difficult of media to incorporate into such business-driven events, ALAC’s Director, Tim Fleming, remarked that the fair has always made a point of bringing live performance to its visitors as a way to engage directly and to expand its overall emphasis from being solely on sales to more of an overall experience that is as much about looking as it is about collecting.

Nonetheless, most galleries reported having done very well after just the VIP viewing on Thursday evening, after which many had sold out practically their entire booths.  Perhaps this is in part due to the fact that while there were some exciting examples of slightly less accessible work, such as large-scale sculpture and awkward, free-standing installations, much of the art on view remained somewhat flat, wall-oriented and, shall we say, pleasing to the eye, though there was a notable number of works that exuded a sexual undertone in sometimes   overt, sometimes more playful ways.  For example, Sean Shim Boyle’s oversized Japanese, stereotypical good luck cat at Various Small Fires’ booth, who was rather conspicuously masturbating in the tick-tock rhythmic motion with which such toys usually wave with one paw. 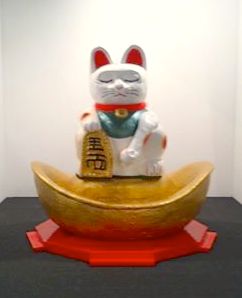 Despite the saturation of paintings and other wall pieces and the surprising fact ALAC, though host to more non-LA European international galleries than ever before, still only includes seventy galleries in total, there was much to see, and a good deal that genuinely caught the eye.  Right by the entrance, Foxy Productions (New York), presented a particularly humorous and streamlined wall piece by Michael Wang, titled, NIKEADDY (2013), that consists of thirteen right foot Nike tennis shoes in just slightly varying shades of black, white and grey, each consecutively placed in their own, Judd-like box.  Though Wang’s work has at times referenced certain brands and branding as practice more generally, “NIKEADDY” brings the product itself into the work in a way that is both alluring and at the same time slightly unwholesome, as one could, with a bit of imagination, be momentarily transported to the ever oppressive world that is Niketown. 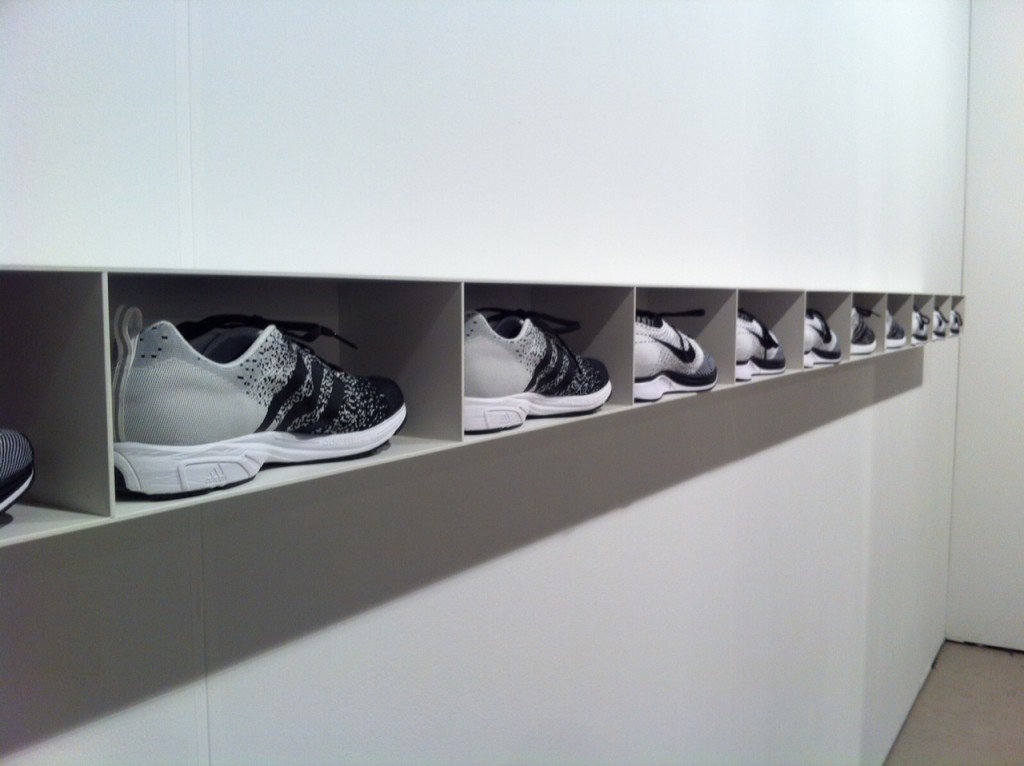 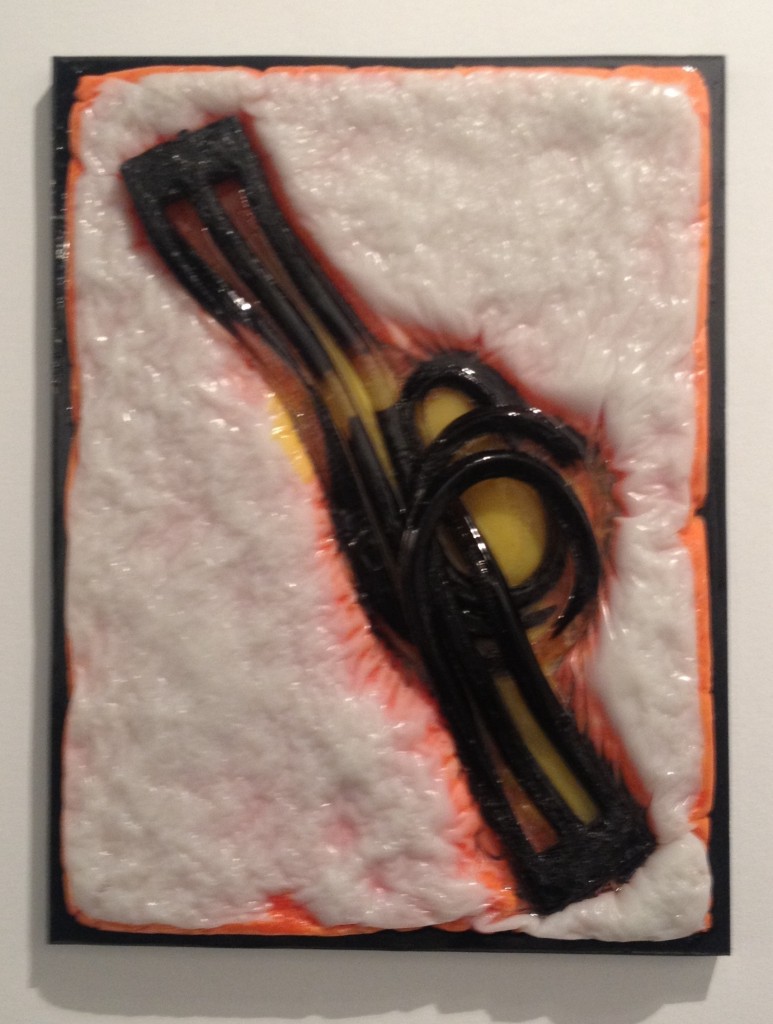 Other highlights included three-dimensional, colorful, framed pieces by Jesse Greenberg at Loyal Gallery (Malmo, Sweden), a series of large, grey, leaning, minimalist sculptures and wall pieces, each with an indented, circular pressing at the middle, by Sinisa Kukec at Spinello Projects (Miami, FL), an overtly conventional and bland-colored countertop with arbitrary extra “parts” much like an uncompleted piece of Ikea furniture that was repeatedly mistaken by guests as a place to sit, by Daniel Turner at team (gallery, inc.), (New York), and playfully figurative, object-based free-standing sculptures by David Armstrong Six at Parisian Laundry (Montreal, Quebec). 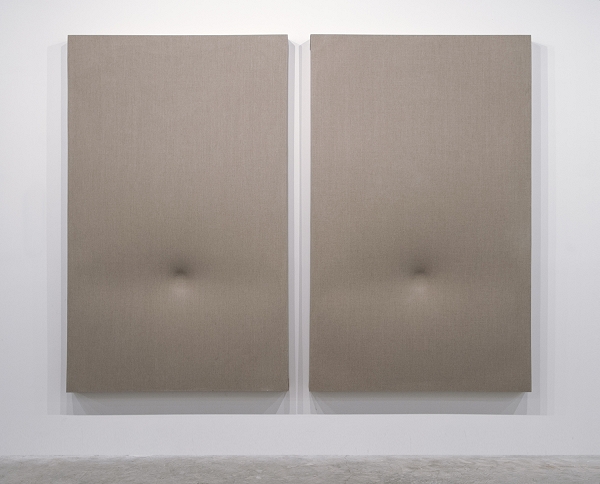 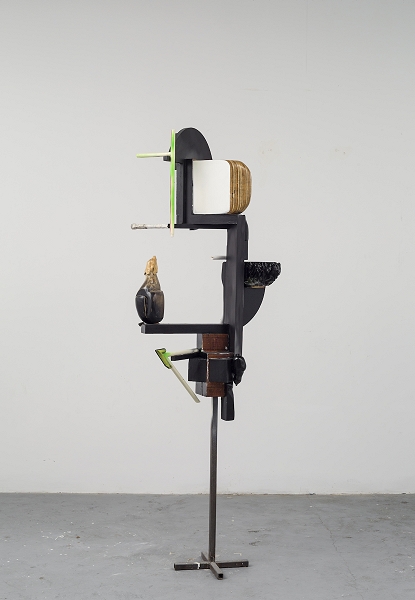 Where ALAC had hit nearly all of the boxes on the checklist of demands for a sophisticated, globally tuned-in contemporary art fair, (it was sadly lacking much video work, a mainstay throughout contemporary art and a true representation of today’s visual and cultural language), its counterpoint, Paramount Ranch, could not have been any more divergent.  The fair, which inhabited the iconic set of many a Paramount Studios Western movie from yesteryear, was organized by Liz Craft and Pentti Monkonnen of The Paradise Garage, and Alex Freedman and Robbie Fitzpatrick, owners of the new, L.A. gallery Freedman Fitzpatrick.  To call the atmosphere casual might be an understatement, as most of the action took place either at the Saloon where guests enjoyed the music of dj’s playing real records while sipping Micheladas and cold-brewed iced coffees, or a bit up the dirt road on a platform taken over by Gavin Browns’ L.A. space, 356 Mission Road, where an informal version of New York-based artist, Scott Reeder’s Drunk vs. Stoned (as in, who can draw better), took place throughout the day.  Nearby two studly, tattooed young dudes garnered quite a bit of attention, sitting on a wooden bench wearing only white boxers and cowboy hats while sporting Tom of Finland-inspired bandanas by New York artist, Stewart Uoo, (a one-off project commissioned by Artists Space). 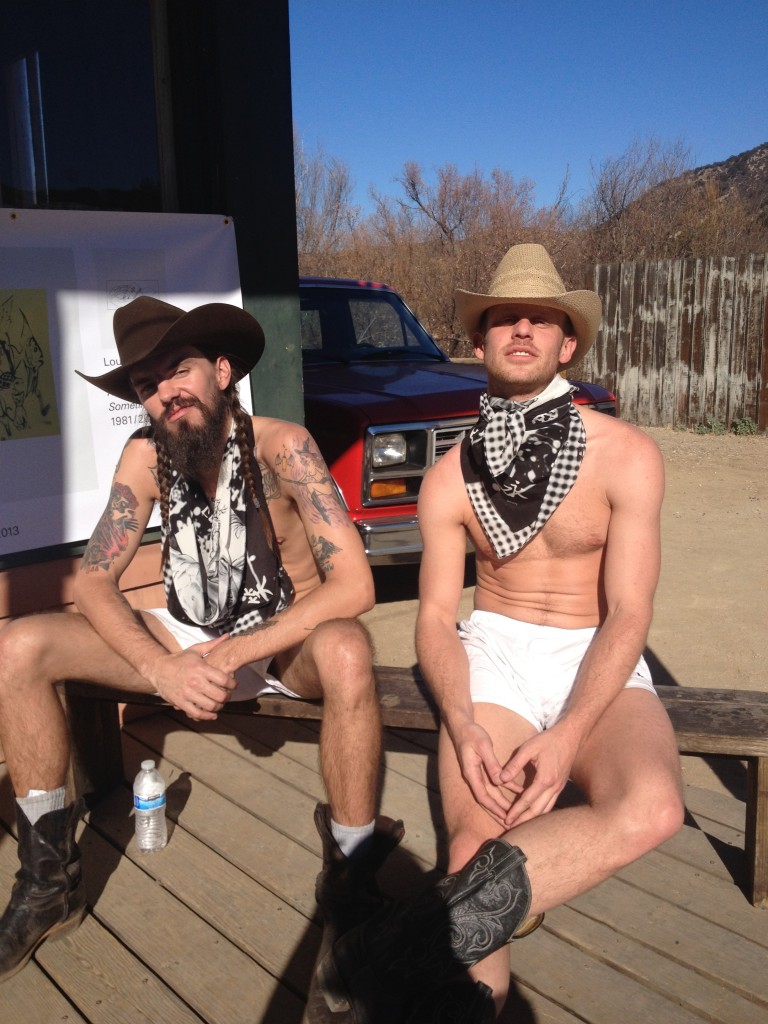 Meanwhile, artwork appeared not only in each of the ranch’s little buildings, such as the Barbershop the Mess Hall and the Sheriff’s office at Great Bend Jail, for example, where an audio recording was being played on a device behind bars, which accompanied a video being projected on the wall next to it.

While many of the thirty-two international galleries and artist-run spaces, most of which are relatively young and just beginning to forge out their programs, presented easily transportable and installable work, (paintings, drawings, small, object-based sculptures and installations, etc.) there were some challenging surprises and out-of-the-box projects. 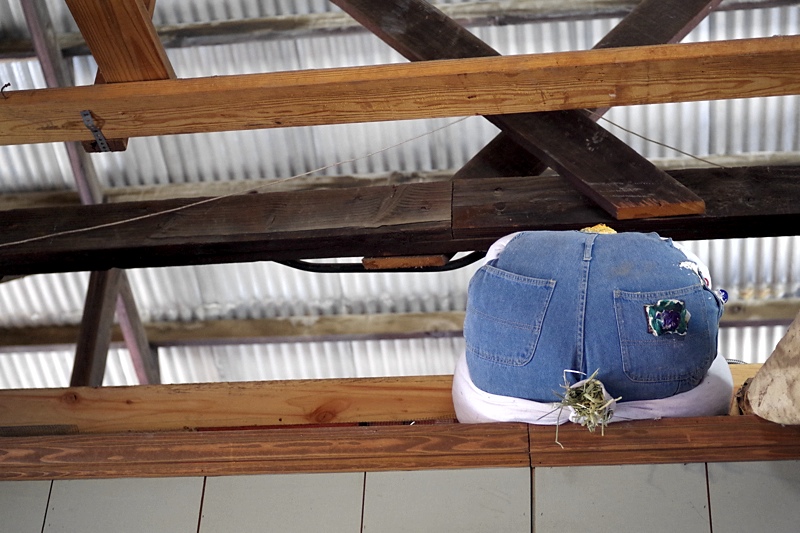 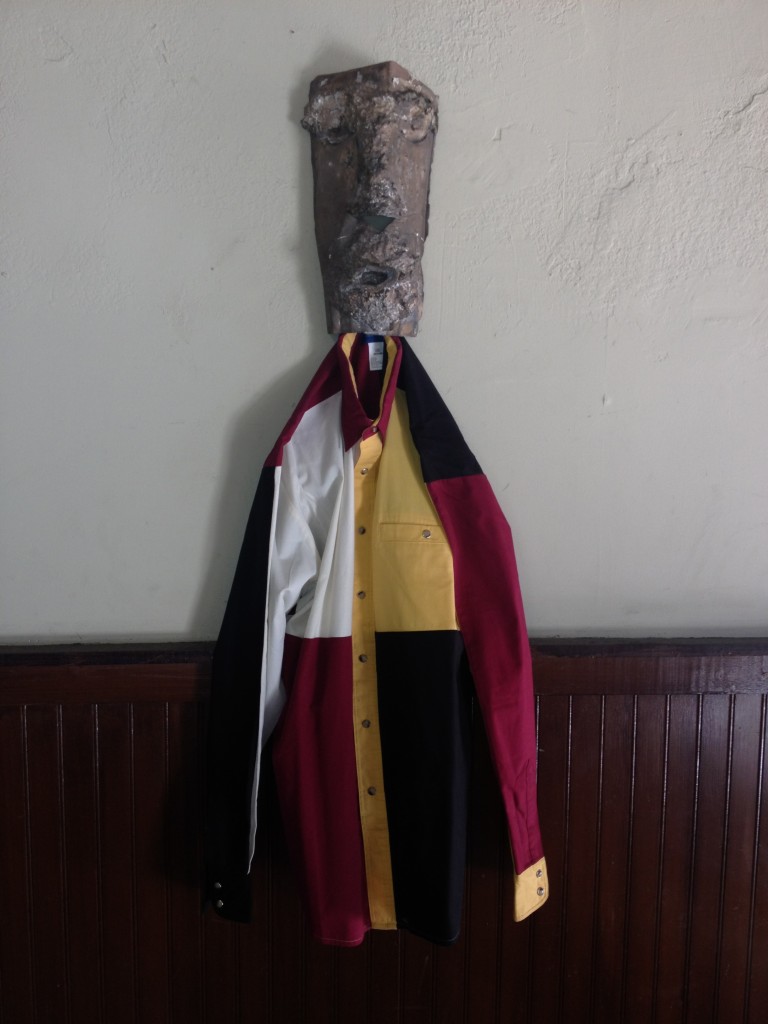 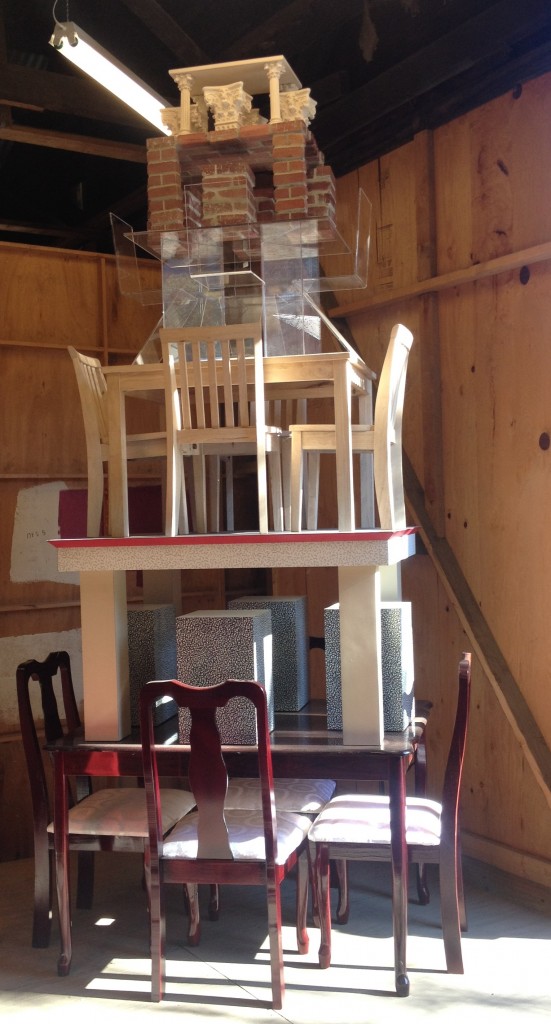 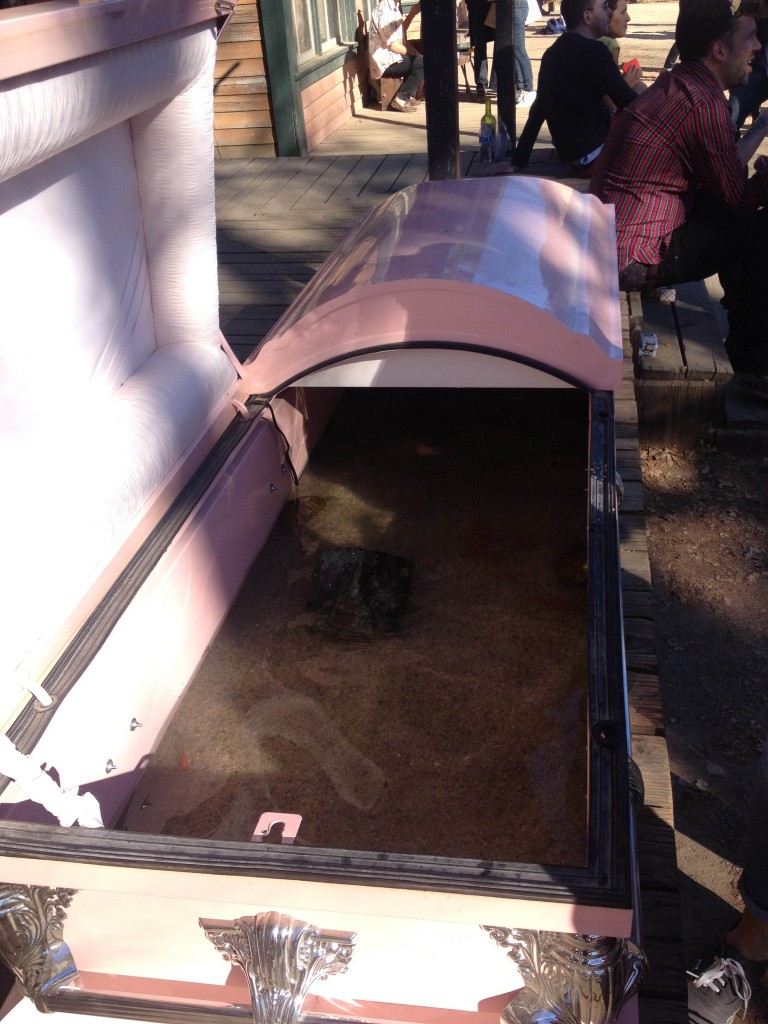 A tower of tables and chairs in Francois Ghebaly’s room defied gravity, while out in front of the Saloon a bright pink opened casket was filled with sand, water and live turtles swimming about. Other happily unusual works and such included a 3-D cross-section female anatomy model submerged in a glass tank under a very bright black light, oddly morphing what most find a common trope of the doctor’s waiting room, oversized prescription drug boxes free-standing in a large mass like a miniature city of pre-fab buildings, and, most kindly, Tomoo Arakawa, (yes, Ei’s brother), of Fukushima, Japan’s Green Tea Gallery Worldwide, accompanied his collaborative video project with Ei (under the name United Brothers), by serving visitors green tea flavored popcorn, mustard pickles and sake. 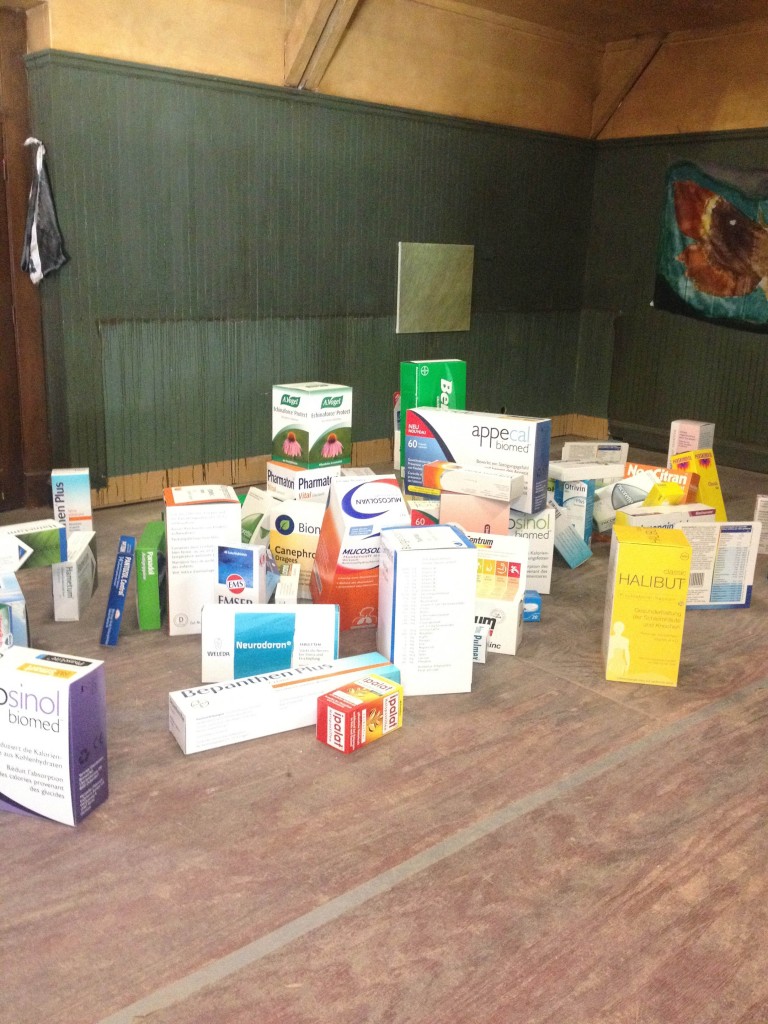 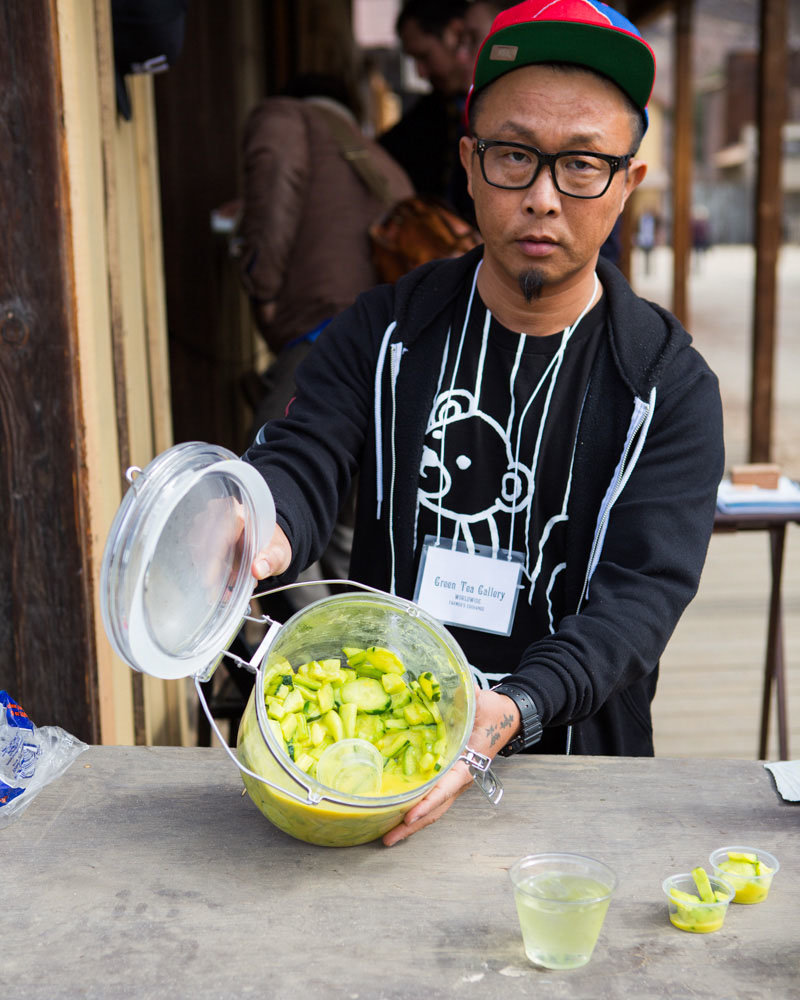 Not only did exhibitors push the boundaries in refreshing ways, but Paramount Ranch so embodied the laid back ethos of L.A. that makes it the perfect antidote to the bustle (and in January, malaise), of New York, that unofficial “installations” were popping up under trees, on rocks and branches and even on top of parked cars all over the place.

Both fairs shared one of the most important things for these kinds of events, which is that they presented work that was predominantly, if not almost exclusively, made within the last three years, and much of it made during 2013.  This allows viewers and buyers alike to see what is going on with artists from around the world. Insomuch, similarities and divergences tend to come more easily into focus, and conceptual parallels begin to form.  Perhaps one of these two fairs without the other might have made for a less than tantalizing weekend in the arts of Los Angeles, which seems to continues to gain speed and enthusiasm with every year.  Yet, with the yin and yang that the two created in juxtaposition to one another, L.A. locals and visitors had the rare opportunity to see young art, artists and in some cases galleries, from all over the world participating in new ways of organizing and viewing art, which thus reconfigures both the literal and metaphorical frames within which we approach and contemplate them.  Over all it is encouraging to see more and more of such thought-provoking and diverse programming coming to the West Coast, and we can only assume that the warm, waters of our contemporary art scenes will continue to increase in depth and expanse within the next few years to come.