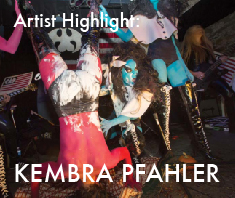 Kembra and I meet at Remedy Diner around the corner from her place in Alphabet City. Christmas music plays overhead as she orders cup after cup of coffee. Always dressed to impress, she’s wearing a full body camouflage hunting jumpsuit with coaster-sized glasses that she admits make her see things too clearly.

This is the second time I’ve interviewed Kembra, the first being at her solo exhibition entitled “Fuck Island” at Particpant, Inc. in September of 2012. She leans forward closely to the recorder, laughing intermittedly as O Holy Night sounds above us in harmonious irony.

Known largely as the lead singer in the glam-punk-future-feminist rock group the Voluptuous Horror of Karen Black, Kembra is currently instructing a class from her apartment/studio space entitled “Performance Art 101.” 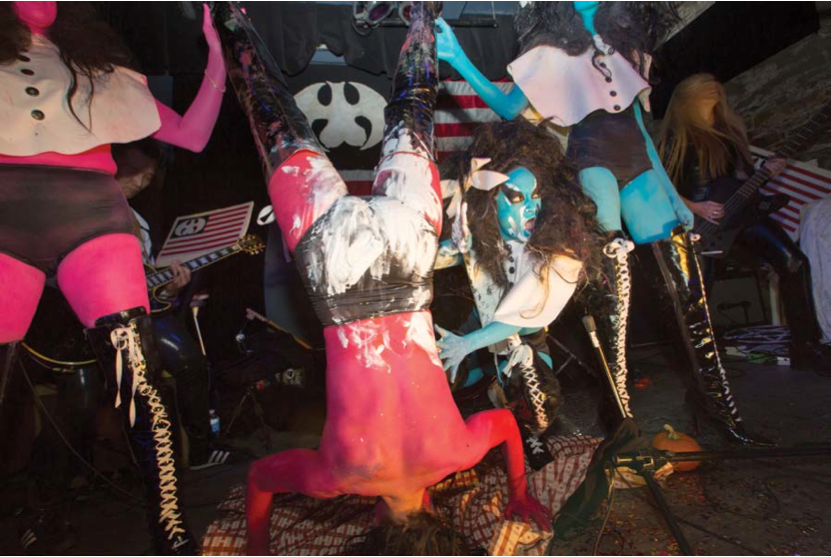 I asked her to tell us more about it…

In Performance Art 101 everyone is accepted. This is a one-on-one class in my apartment, so I had to do no fundraising to build a university campus. In my apartment I have a student lounge, I have student lockers, I have a lunchroom, and I have a work- room. And in the spirit of Availablism, I have developed this very strict vocabulary of images, and share the technique behind the Voluptuous Horror of Karen Black, and my performance work, which is also called anti-naturalism; it’s also been called extremism—all by me, of course. In 1980 when I started performance, I decided to call my performance work The Manual of Action, which was sort of an invisible book, a dictionary, as it were, of my vocabulary of images. Of course, in 1980 it was a two-page book. I only had a couple of different strong images that I used to project in my performance, one being the egg cracking, and I’m standing on my head cracking the egg in my vulva, that was one of the first pieces I did, and the other one is the bowling ball piece. Those were two of the first things I did.

And now, years later, The Manual of Action has made my career complete. I have a lot of images to share with students on Availablism. My definition of Availablism is making the best use of what’s available. It has a basis in finance and commerce, although if there is money available to be used it will be used. It’s not a celebration of poverty, but of abundance. It’s having the willingness to be an interdisciplinary artist. In my case, performance was about using the available tools that I had, which was my body and one of my first performances, the egg piece, it was having one egg in the refrigerator. It’s a training course in how to work with the myriad of tools that are available in our everyday lives. One of the tools that became available to me in 1980 as I was walking down the street and I saw two bowling balls in Gramercy Park. I, for some reason, was compelled to tie them to my feet and try to balance on them and walk on them like shoes. I later got all sorts of affirmations in visual history, a painter Hans Baldung had done etchings of witches with balls tied to the bottoms of their feet. So maybe it was something that had traveled through time and landed in my brain, this image of a woman walking with bowling balls on her feet. Sometimes I sing the theme song to Blade Runner when I’m standing on the bowling balls, and it’s really a good time.

Right now I’m just in the process of interviewing the students. It’s a one-on-one class and a five to seven day course, depending on the student’s availability. I got the idea to do a one-on-one course because I spent the last two years working on a future feminist book with Antony & CocoRosie and Johanna Constantine. We would make a decision to spend a chunk of time together to exclusively work on one idea as a group, and that was the first time I’d ever done that. I found the experience of writing our future feminist tenets so beneficial, and it was as a result of making a decision to spend a concentrated amount of time together, having a dialogue about the work that made it so fruitful. I wanted to use the sort of paradigm that we used with writing the future feminist tenets as the same sort of work structure in Performance Art 101, spending a concentrated amount of time with each student. 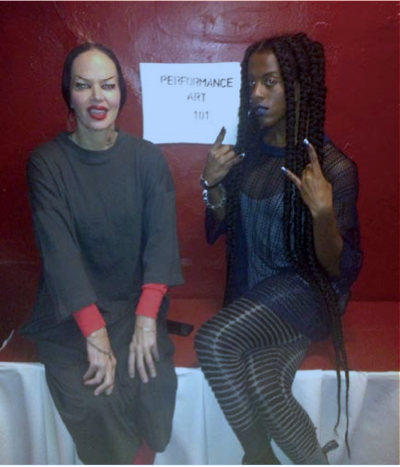 Photograph of Kembra performing by Walter Wlodarczyk. Courtesy of the artist.

John Kelly invited me to speak at his Bard class about performance recently, and I also recently went on tour with CocoRosie, and opened for them. Instead of doing a traditional music act opener, I would go out in front of thousands of people and say, I’m Kembra, and let’s do Performance Art 101 together. And people were just going mad for Performance Art 101. We did singing practice with audience members and I walked people through the bowling ball performance. I’ve also gone to many different universities, like Columbia and NYU, to do performance instruction, but I was hesitant to go into that kind of university lifestyle since I feel like people in New York City, most artists can’t even afford to pay their apartments let alone student loans or pay for expensive colleges. I think it’s unrealistic, so the school that I founded is a sliding scale program and I’m organizing financial aid for the student artists where I solicit some of the billionaire artists that I know to sponsor the student tuition.

The agenda is very specific, it’s to study Availablism, and to bring out of each student their very own vocabulary of images and tools that they can work with after the course. So the next several months I’ll just work with the students that have signed up, and we’ll together write by way of doing; by way of hitting the ground running and making the best use of what’s available; we’ll write the core syllabus by way of action, by way of doing it.

I really feel like the technique in the Voluptuous Horror of Karen Black, the Availablism is a practice that is extremely contrarian to most other performance work that I’ve seen. To me, of course, none less valid and none less beautiful. It’s just something that I started. And then each student will be interviewed on the area of art work and performance that they want to work on, whether it be directing, working with other people, music, or movement. And if they are interested in working musically with other people I get to play in their band, which I think will be a nice exchange of power dynamic. That we’re going to just be working together essentially. I really loved George Kuchar’s class at the San Francisco Art Institute. His film class was basically the students made work with him. I was a visiting artist a few times at his class and it was so helpful to me, and a really good experience. So my course is kind of a culmination of all of my experiences in availablism and anti-naturalism over the years, and also taking the best parts from the courses and the artists that I’ve really grown from, like George.

O Holy Night had devolved into the never ending Little Drummer Boy, and Kembra broke from a long and silent window gaze to end with the following:

You can’t change the world if you stick to the same paradigm. You can’t do something different, I feel, if you’re working in a structure that’s a meme, that’s a Xerox copy of itself. I just thought that I might be alive for ten or twenty or thirty more years and I want to make sure to share this with people. And it’s in a spirit of fun and in a spirit of revolution that I start Performance Art 101.We’ll see what happens.

This interview is selected from Issue 15 of SFAQ.

–Art in Obscurity – the Philadelphia Wireman