Currently on view at Johansson Projects in Oakland until March15th, is the solo exhibition by Margo Wolowiec titled “Following.” The term “cult following” comes to mind. Cult media genres are usually divergent, strange, and non-mainstream niche interests that attract a following only privy to the bizarre or underground subject matter that their art portrays. However, following also lends itself to mainstream culture as well, especially with current online outlets such as twitter, Instagram, blogging, Tumblr and Pinterest to name a few. Once implying connoisseurship or fanatical expertise, the phrase “following” today alludes to a quickly seen image online, a “like” or a fast share with friends. The plethora of data and imagery is not necessarily about following a niche, but rather gathering excess or for creating a digital archive that may or may not actually be referred later for any tangible purpose. 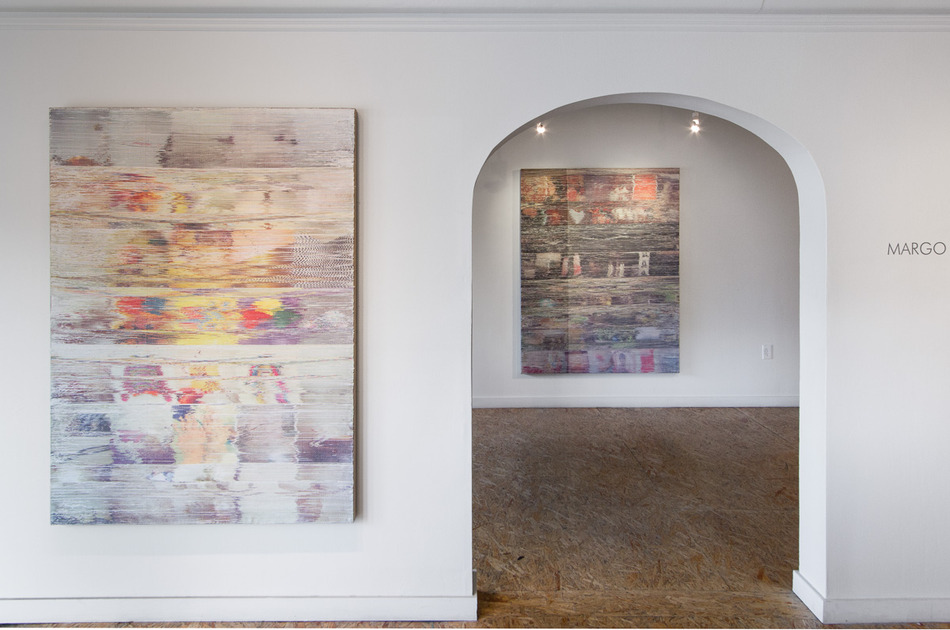 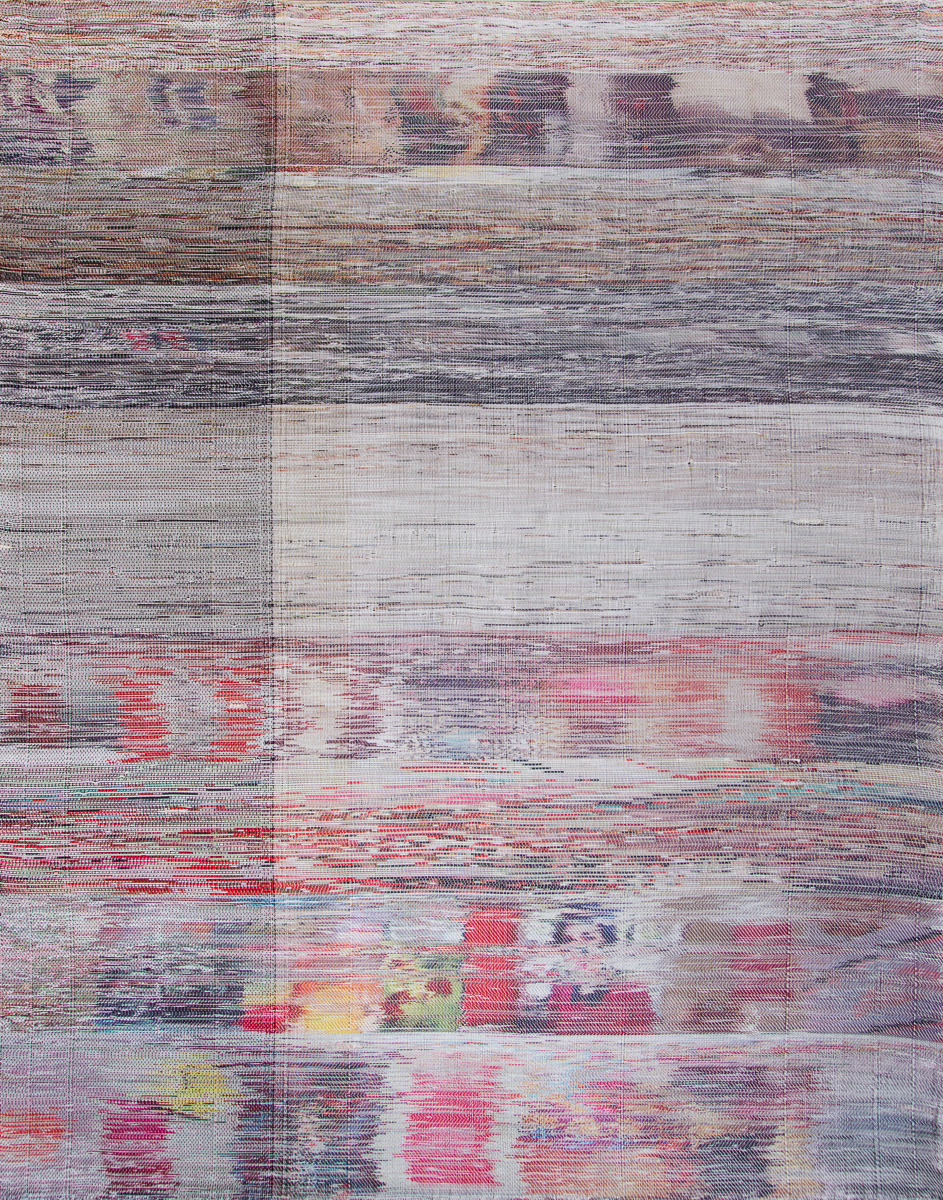 However, Wolowiec takes this digital excess and does turn it on its head toward a more human interaction with the data, transforming it into material. By materiality, one can remark upon it in the abstract sense, but in the case of Wolowiec’s work, the meaning of material is two-fold, because she works with textiles, and in this case threads that are woven to form large visual planes. In weaving, warp threads are the lines that run vertically up and down a loom and the weft are the threads that run in and out horizontally to link the whole thing together into one object, traditionally blankets or for garments. Dizzying fortitude is obvious in the making of this work, each small thread by the thousands is aligned and even smaller threads weave them together. Wolowiec pushes traditional weaving into contemporary visual terms by blending new technology with ancient ways of making. In all of the work the warp threads are dyed using a special printing process to adhere images to the fibers. The images that she uses are from Instagram. The subject matter is blurred and indecipherable, but one can make out images of faces in almost all of the work. 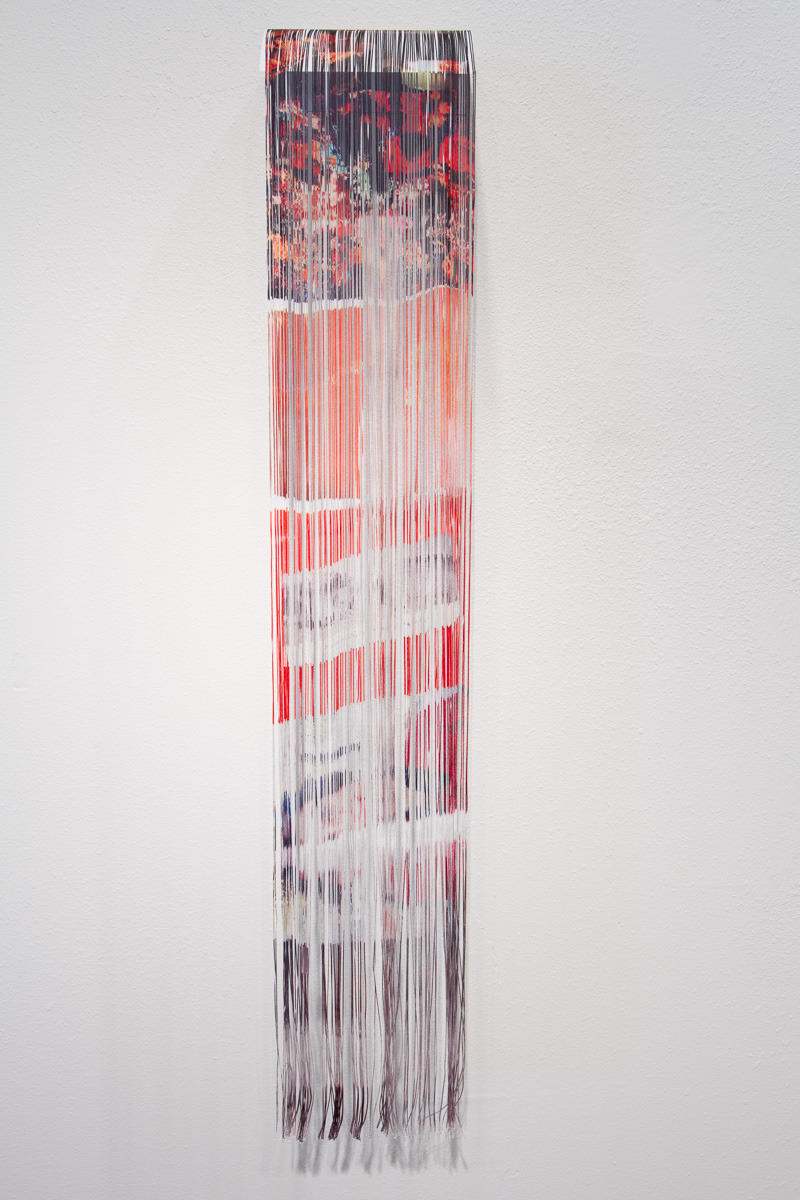 The faces hover in controlled chaos amongst the surrounding blocks of color, equally abstracted and non-referential, save for one heart shape and the occasional clock, hands or perhaps flowers or cars…it is mostly unclear. The textural patterns overall reference the blip on an old television caught in between channels or the staggered loop of truncated computer screen glitches. Metaphorical static hushed-sounds emanate from the skewed and off-kilter imagery. Acceptance for what is not shown is at equal play with visceral frustration and longing for clear images in processing this work. Most elusive and evasive are the works that are draped over metal cleats, the threads hang delicately with no other materials to keep them in place. 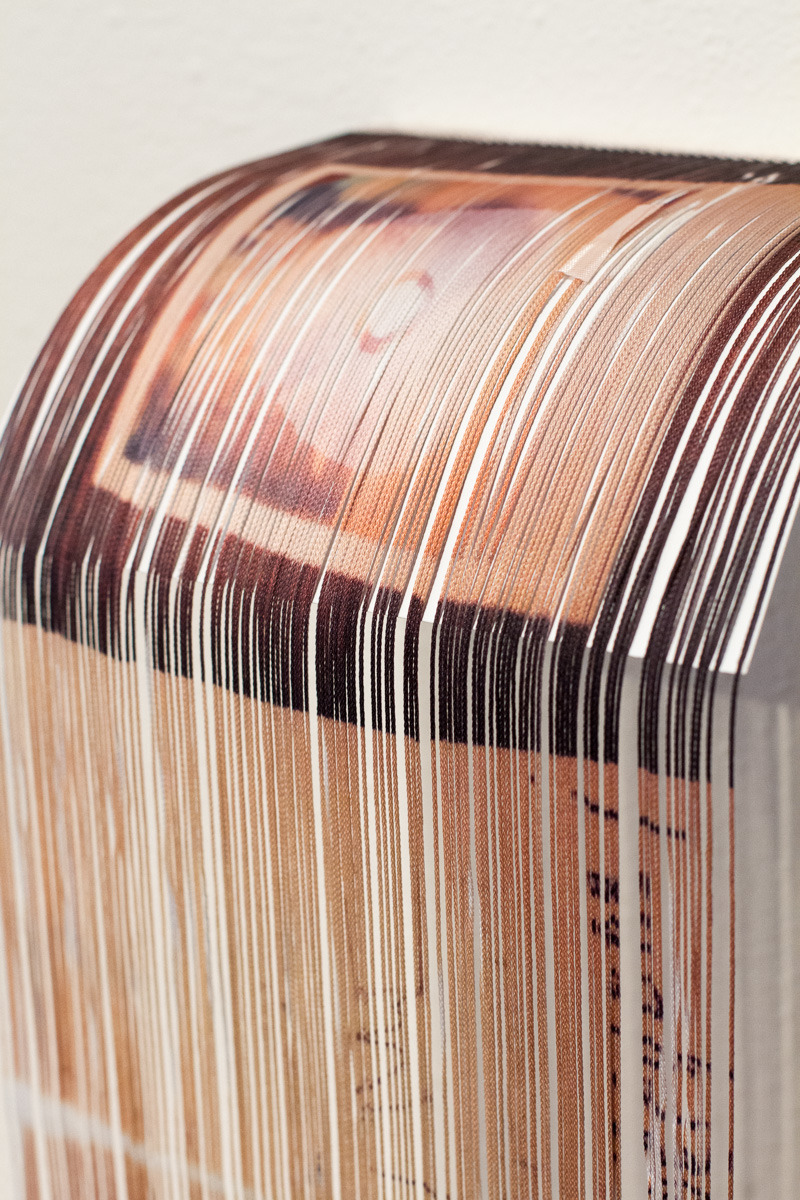 On these pieces the images are barely there and are in danger of falling out of alignment at the slightest whisk. The long fringes hang softly and slightly imperfect with tiny crooks near the ends. These pieces are hung approximately at waist-level, prompting the viewer to peer at them face-down. From a distance the work seems to have many alternate reads, from tresses, to low window treatments, to exaggerated fringe on shawls, referencing a decided human quality.

But the very nature of how Wolowiec makes this work breaks apart any post-digital divides that might be happening in current art vocabulary. Instead, the work takes a desire for human phenomenon in a post-digital age, and physically, laboriously makes phenomenology tangible yet elusive.