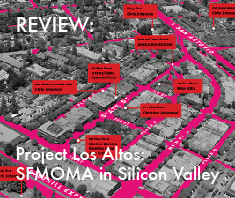 By Kate Haug and Kelly Inouye

Stepping onto the streets of downtown Los Altos is like traveling through a time portal back to the well-kept, middle class optimism of 1960s California.  The neat streets and unassuming mom and pop stores harken back to a time of a healthy American middle class where public services were well-loved and functioning, not haggard and overwhelmed by increased demands and decades of budget cuts.

In Los Altos, there are no homeless people sleeping in the spacious library or manicured parks.  The garbage, organics, and recycle bins are orderly, stencils clearly labeling each can.  Figurative bronze sculptures of children, a fairy, and a dog dot the landscape. Superficially, an outsider would never guess this idyllic little oasis is actually an economic powerhouse that continues to shape our lives for better and worse.  It’s quite a shock to travel from San Francisco, where protestors are up in arms over tech buses, skyrocketing rents and the lack of concern for those displaced, to a place that on the surface looks completely static in spite of its seminal role in these changes.

The brilliance of SFMoMA’s “Project Los Altos” is its choice of Los Altos as a site in which to explore the massive disconnect between Silicon Valley and the economic and cultural disruption it has caused on a global level.  The town provides a bucolic foil for the monolithic evolutionary hold that technology has on the early 21st century. In Los Altos, there is no Apple store.  Instead, there is a “Computer Repair Shop” advertised by a wooden sign as if people really repaired their computers and the intentionally short life span of technology did not render most machines and software inoperable within five years. 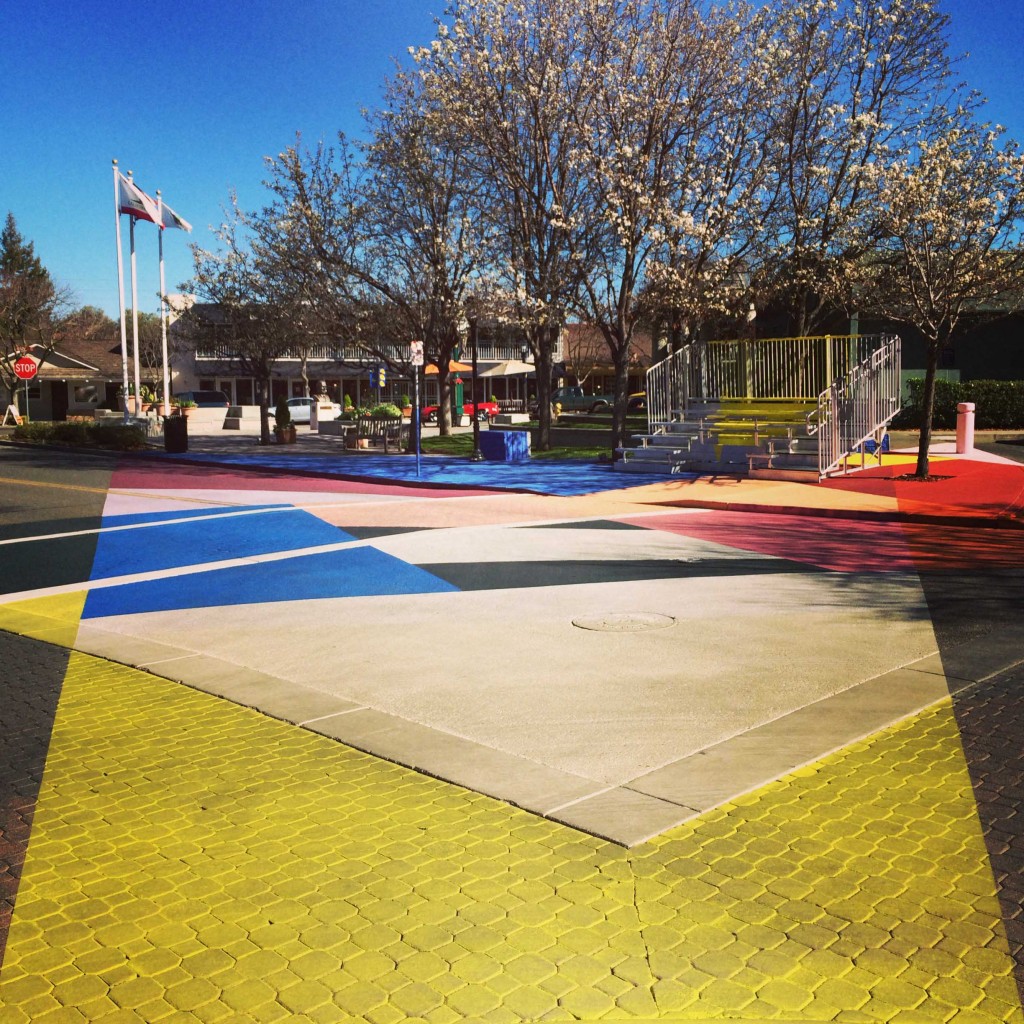 The pieces in the show vary in their relationship to the location.  Some, like Jessica Stockholder’s and Spencer Finch’s, are literally connected to the site.  Stockholder’s “Cross Hatch” is a painted geometric form reminiscent of light dispersed through a building sized prism at the cross roads of State and Fourth Streets.  A small set of aluminum bleachers, creating a stadium effect, allows visitors to sit and watch passersby on the street or interact in a spontaneous manner.

Finch’s “Back to Kansas” a color grid painting that changes slowly and subtly in chroma from dusk to dawn stands in direct philosophical opposition to the immediacy of everything which technology can provide.  Finch’s piece, experienced in real analog time, provides a contrast to the digital experience which collapses time and space, firmly connecting the work back to greater physical forces like the sun.  This commitment to physical space and location is somewhat ironic given that one of technology’s promises is that time and space are negotiable factors.

Work by Charles Garoian, Kateřina Šedá, and Alec Soth have a social documentation connection, mapping social spaces and identities.  Garoian has developed and implemented critical thinking processes in studio art and art history courses based on the radical strategies of performance art since the 1970s.  At 359 State Street viewers are treated to a video slideshow of projects completed with students at Los Altos High School.  “Drill Team: Homecoming Parade” from 1973 is among the highlights. For this project, Garoian’s students dressed in uniform and marched in cadence using hand drills to screw bolts into panels of wood during the town’s homecoming parade in an effort to critique the homecoming tradition. Garoian encouraged his students to intervene in conventions they found limiting or misguided in incredibly imaginative and concise ways, crystallizing the 1970s counter cultural, anti-authoritarian spirit. He is currently Education Director of the Palmer Museum of Art at Penn State University.

Alec Soth takes on the challenge of photographically documenting the hidden culture of Silicon Valley.  Soth writes,” I wanted to strip the pictures of color and shadow and depict the whiteboard of possibility this place represents.” More importantly, he captures the humble and “holy” sites of the Valley – the HP garage, the Apple garage – which bore, out of immaculate man on man connection, the new messiahs of the 21st century. 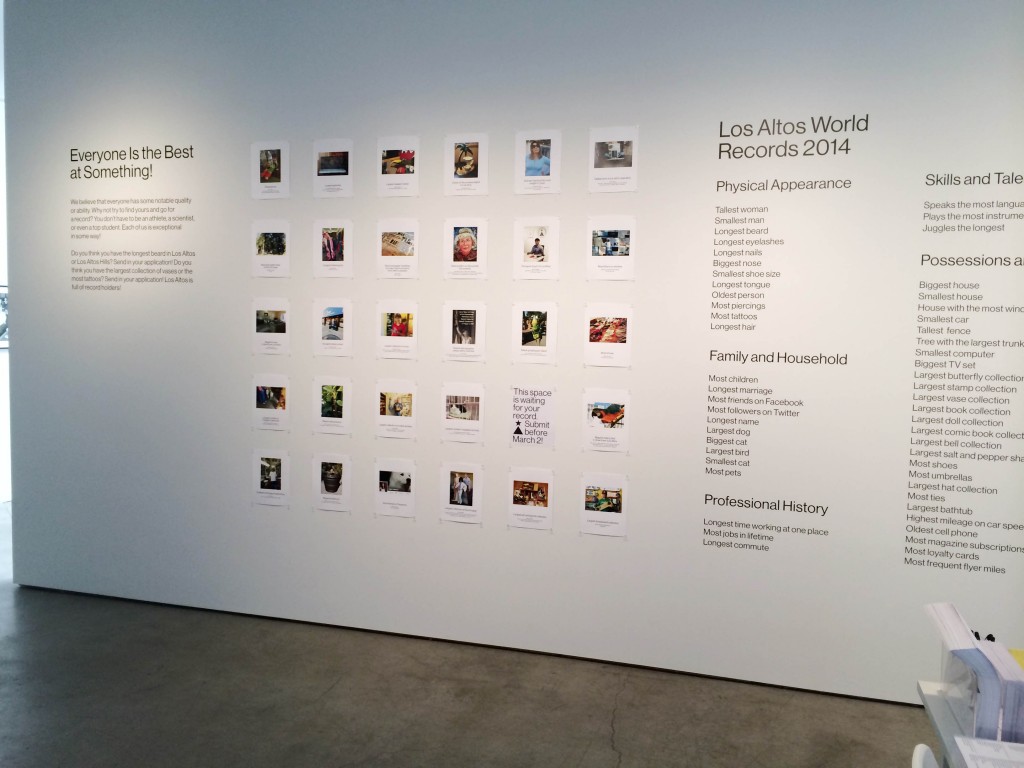 Kateřina Šedá embarked on a social studies project by having local citizens create their own book of world records. Her project “Everything is Perfect” developed from conversations she had with residents of Los Altos and Los Altos Hills about the ways in which they measure success. The project is based on the Guinness Book of World Records but instead of feats of strength, stamina, or skill, everyday attributes that make people unique are worthy of official record. “Longest Beard” and “Most Pets” were among records awarded by the artist after applications were reviewed. Even the Mayor of Los Altos got involved. He holds the record for being Youngest Mayor, appointed at 25. Šedá observed that the people she met seemed preoccupied with success in the workplace while they also had tremendous fear of failure.  Her comments from the artist talk were in stark contrast to her jovial and light-hearted piece. In the same talk, Šedá noted that she and her husband were singled out as outsiders and questioned by the police (who ride Segways) as they sat and observed in downtown Los Altos in preparation for her project. 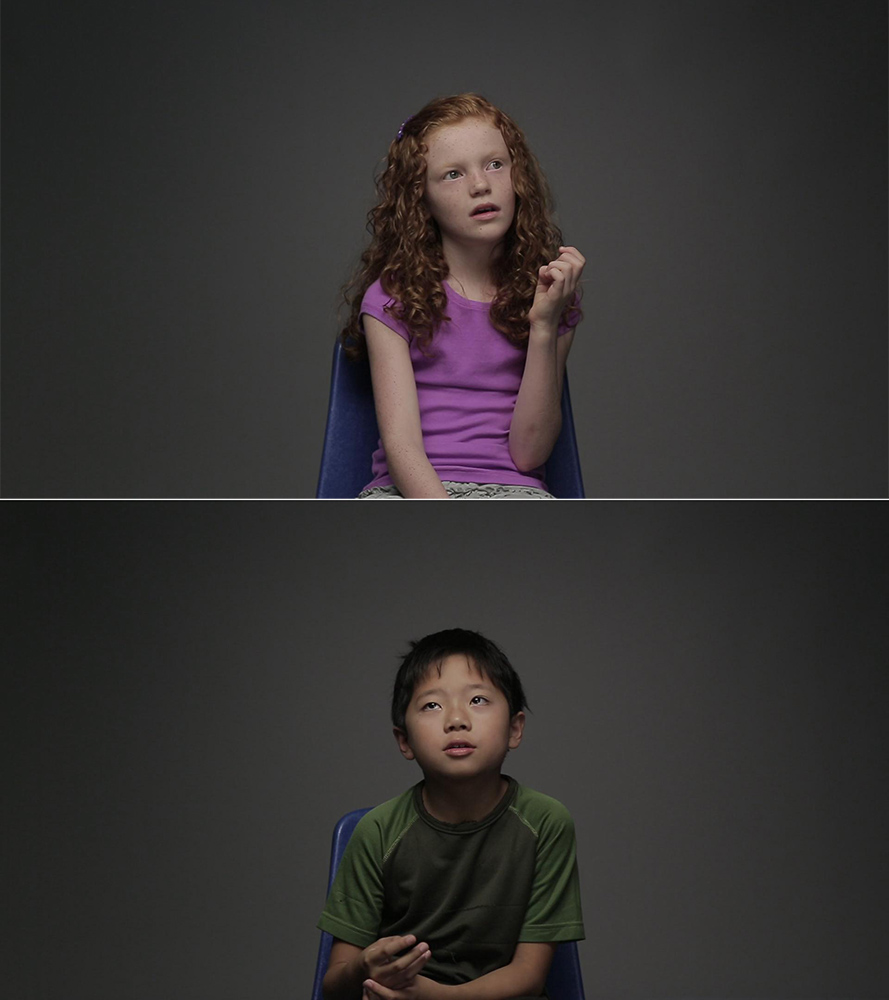 Long form video pieces by Mike Mills and Christian Jankowski also connect directly to the larger social implications of Silicon Valley. While the official website of the city of Los Altos advertises it as “A great place to raise a family” Mike Mills’ project “A Mind Forever Voyaging Through Strange Seas of Thought Alone: Silicon Valley Project” reveals a darker side of childhood here through a series of interviews with local children whose parents work in the tech industry. When asked what they think the future will look like, they worry. They worry about technology taking over the world. They worry about technology making it harder for people to communicate and relate to each other. They worry about environmental impact. In spite of the fact that there are not many outwardly discernible indicators that their hometown is one of the most dynamic economic and social catalysts in the world, these kids have a sense of it and it clearly concerns them as much as it concerns people elsewhere. Some of their thoughts include:

“The world is going to be trashed.”

“People are not going to be as smart. In the time of Socrates they were much smarter because they had to use their brains and now we have computers to do it for us.”

“People all want to be the same, but a little better than everybody else.”

“The world will be so overrun with technology that we will be bored to, like, go outside and play catch.”

“A lot of adults out there are very controlling.”

Mills’ project is set within The Costume Bank at 169 State Street, which has served to raise money for the Assistance League of Los Altos throughout its forty-year history. Costumes are sorted by time period and gender, evoking questions about how this particular moment in history will be remembered. Mills has also recreated a copy of local newspaper The Town Crier dated April 7, 1976; the exact date Apple Computer Company was started in the garage of the Jobs family home at 2006 Crist Drive in Los Altos. 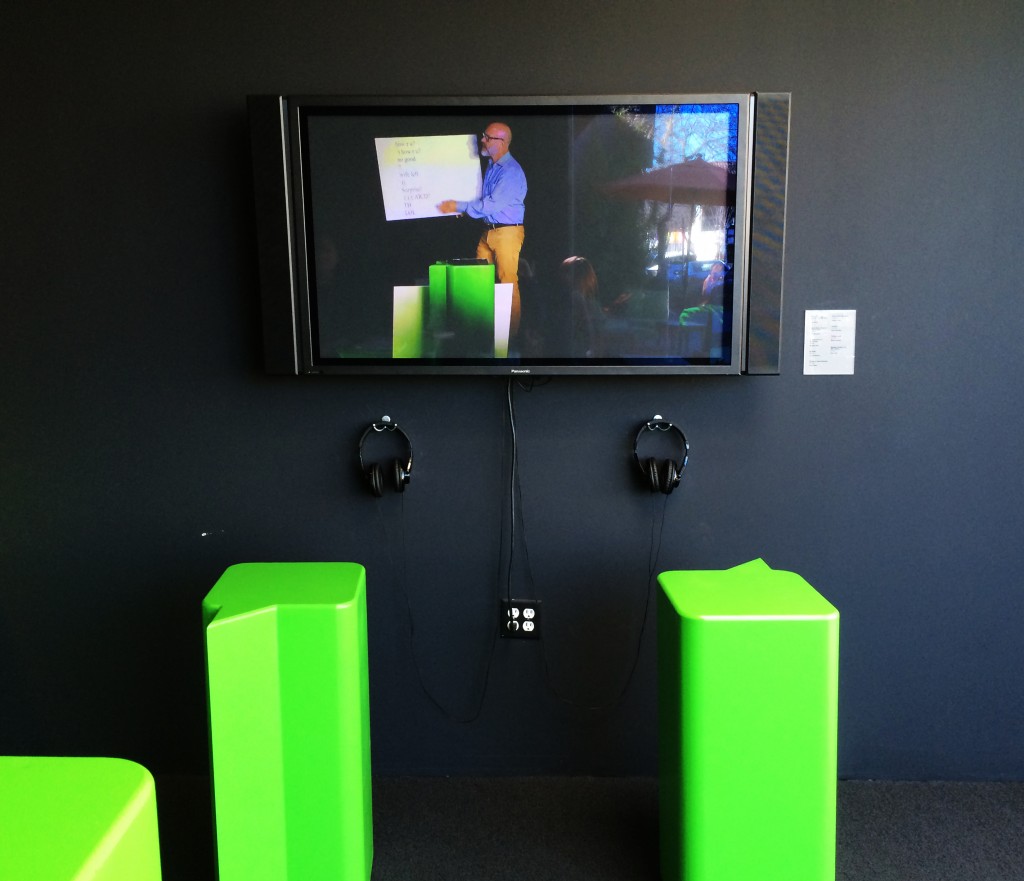 Christian Jankowski’s “Silicon Valley Talks” at 271 State Street offers a parody of the now famous TED Talks. Jankowski’s piece is a funny and succinct look at how the language of Silicon Valley has become both ubiquitous and incomprehensible, a more successful version of Esperanto. The artist asked local technologists to give talks on non work-related topics using tech jargon. The talks were staged in the storefront installation on State Street. The results are hilarious, although the audience was clearly coached not to laugh. While the untranslatable technical pieces that include “subtitles” are easily accessible as jokes, a more deeply critical piece is Jason Danielson’s “How to Write a Poem in 10 Easy Steps.” In his talk he reminds the audience that, “No poem is ever complete without an Alpha test and a Beta test,” and “the difference between good art and great art is the technical metadata.”

Danielson, Director of Media Solutions at NetApp, perfectly apes the tone and posturing of the typical low-key, yet authoritative TED speaker.  TED Talks offer the perfect distillation of new age mysticism, late-stage capitalism, rags to riches Horatio Alger stories (represented most recently with the purchase of WhatsApp by Facebook for 19 billion dollars), and old-time religion.

Danielson refers to the California Dream as part of the Silicon Valley ethos. Boom and bust has been the golden state’s history:  Westward Expansion, the Gold Rush, the 90s Dot Com Bubble, or any of the other waves of migration that have been inspired by the possibility of wealth or improved quality of life. The entire exhibition gives time and space to reflect on the cultural impact of our own time. Project Los Altos is a thoughtful investigation of the nuanced relationship between the valley’s exterior surface and its underlying ripples. Like what’s hidden beneath California’s tectonic plates, the geographic changes that have the most impact are not immediately visible on the surface.

Project Los Altos is on view through March 2nd.