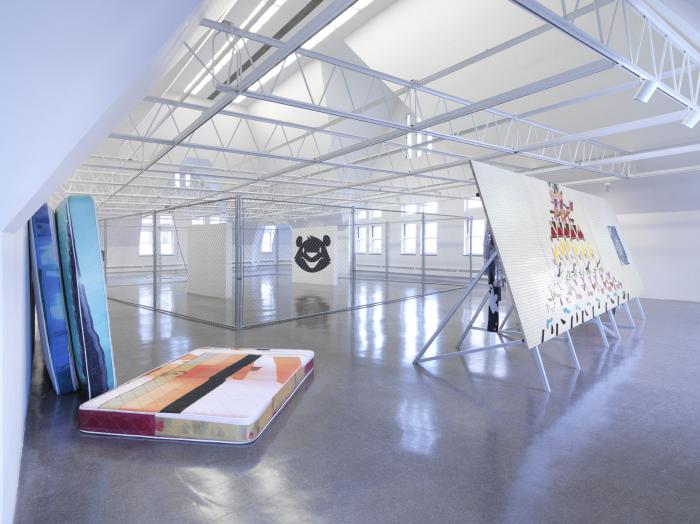 “Teen Paranormal Romance,” curated by Hamza Walker, is an aesthetically smart show with an equally heady concept. Inspired by the popular genre of Young Adult Fiction (YA) of the same name, the thematic for the show loosely moves in and out of surrealism, as it was discussed by Andre Breton in the early twentieth century, and romance as it was explored by Symbolist poets in the late nineteenth century. The work in the exhibition, however, is all contemporary, the oldest piece dating to 2010. “Teen Paranormal Romance” is not an exhibition for young adults, but rather for those of us on the periphery of that world, one that has permeated popular culture. YA literature is not only read by the age group for which it is intended, but by parents of tweens and young adults, educators, family members, and those who are generally interested in the genre. Television shows and movies based on YA fiction such as “The Hunger Games,” “Twilight,” and “True Blood” are indulged in by a range of readers of varying ages. There is not a clear intersection at which these references reside in The Renaissance Society’s show. However, there are moments that point towards the inherent awkwardness of this genre and contemporary surrealism (which arguably doesn’t exist). 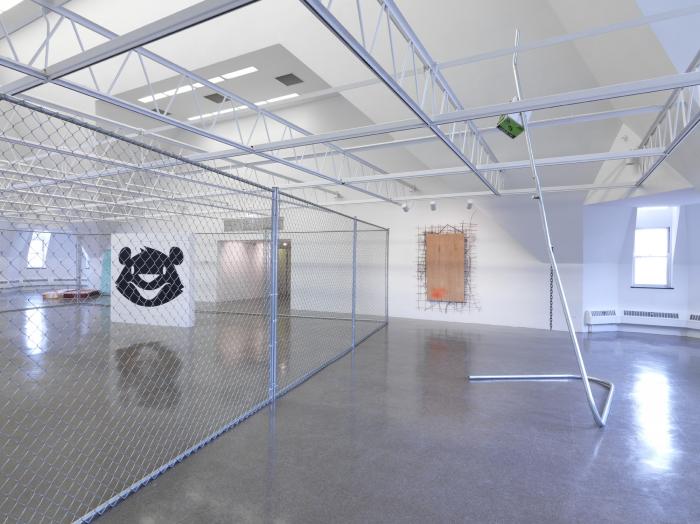 This exhibition exists on the margins, literally and figuratively. Kathryn Andrews’ “Friends and Lovers” (2010) sections off the entire center of the gallery. A chain link fence encloses two cinder block walls—a black cartoon bear painted on each white facade mirrors itself. The bears face each other smiling, leaving the viewer to wonder what their relationship to one another is as the title implies; at this moment, are they friends, lovers, or both?  The viewer cannot ask the characters as one is left to passively observe from outside the barrier. Black disembodied cartoon faces act as a stand in allowing the subconscious to ground the work it whatever is most personal to a particular viewer. These “friends” or “lovers” present a way to substitute the most human of experiences, a relationship. Glimpses of the exhibition can be seen through this obstacle, but one must walk the periphery to examine each work more closely. 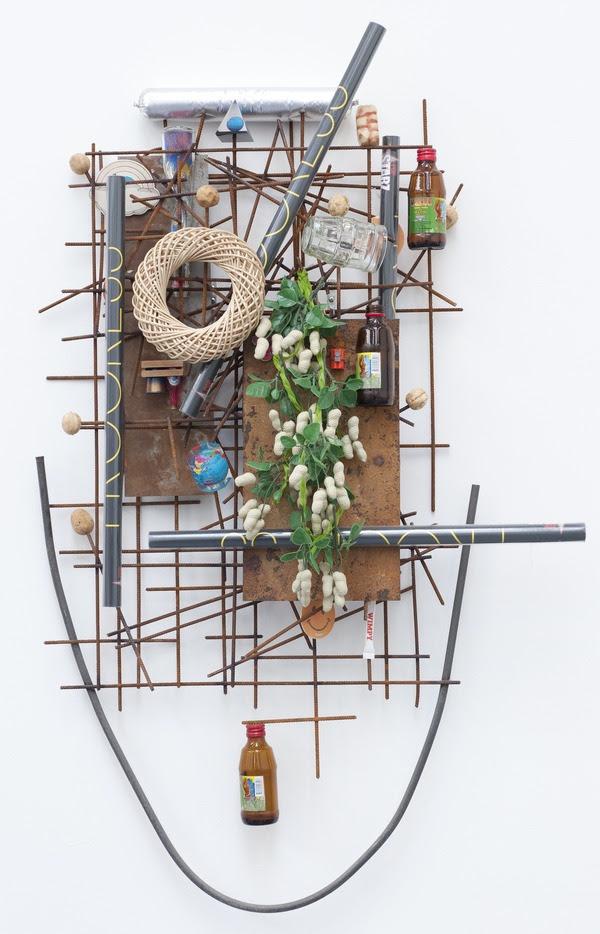 The iconic smiley face, which has borne various meanings to different generations, can be found throughout Teen Paranormal Romance. Established in Chris Bradley’s pizza box “Grease Face #3” and “Grease Face #4” (2011), the ubiquitous face more obviously represents a smiley face reminiscent of something a YA might identify with as an emojii, whereas Jack Lavender’s “Hannah” (2012) is a portrait of his wife made up of items chosen for close likeness to her features. In the context of this show, these portraits are examples of contemporary portraiture practice rooted in the surrealist notion. A practice that not only challenged formal representations of space, but one that entirely altered how a person was portrayed in art picturing the unconscious and all of its delineations. 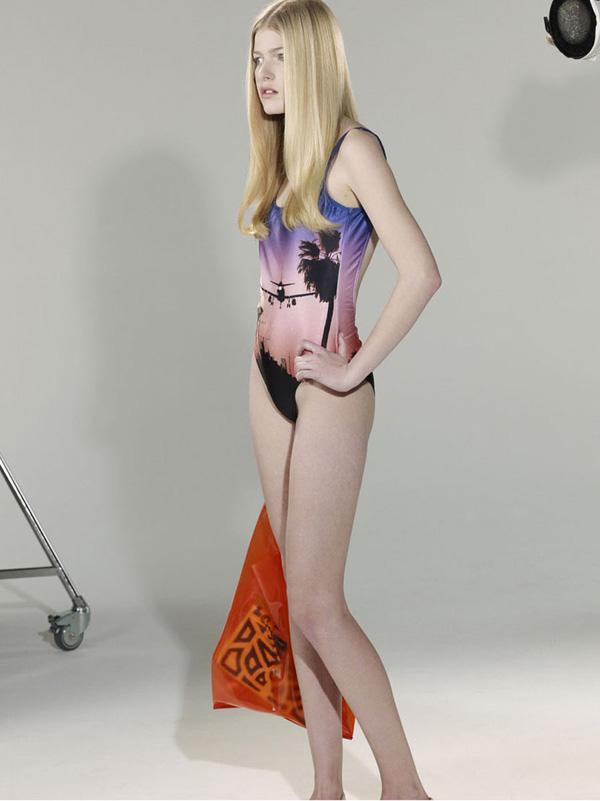 “Even Pricks” (2013), a video work by Ed Atkins, follows an animated hand as it encounters a flaccid penis, various liquid forms, and a deflating thumb against the backdrop of a chimpanzee, which brings attention to the animal nature of sex. In the video, the viewer is repeatedly shown a scene involving a bed, which is alternately engulfed in flames or collapsing at its center into a dark hole. “Even Pricks” visualizes the dichotomy of comfort and desire, two themes often explored in YA fiction. Roe Ethridge’s well-known photograph “Louise with Red Bag” (2011) features an adolescent girl posing in a one-piece bathing suit holding a red tote. A non-illuminated camera light at the top right of the frame and a steel structure in the bottom left, along with a white backdrop, indicate that she is in the studio modeling for a photographer. Her gaze is not projected out onto the viewer, but rather her attention is directed towards the equipment she is presumably posing for, her body in three-quarters with a hand resting on her hip. Ethridge is careful not to objectify this young girl, but rather bring to attention a moment tied to a coming of age experience. The girl’s body is exposed as she is modeling swimwear, but it is clear by her stance that she is struggling to convey a more confident comfort with her body than she has achieved because she is not yet mature enough. Atkins’ and Ethridge’s pieces tie in most closely to the concept of the exhibition because they reference for this audience a not so far off history. Life is short, and adolescence is a recent enough memory. 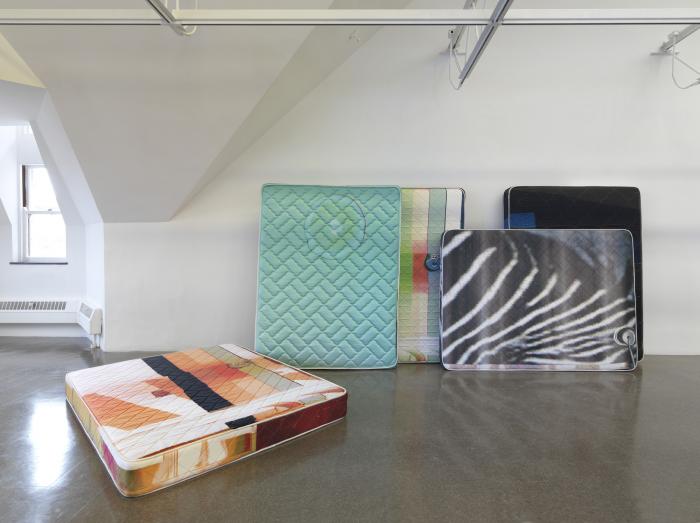 Artist duo Guyton/Walker’s mattresses piled against the wall and strewn about the floor coupled with Anna K. E.’s “Lucky Weekend” (2013) encourage a  playful revelry in the exhibition. K.E.’s colorfully tiled structure boasts commissioned posters that are added to the surface, a new one each day, layered directly on top of the previous day’s poster much like the caked promotions found in subways or scaffold walls in urban centers. The back side’s armature serves as a space for colorful coats to hang in a row, much like lockers or designated hooks found in elementary schools for jackets and backpacks. 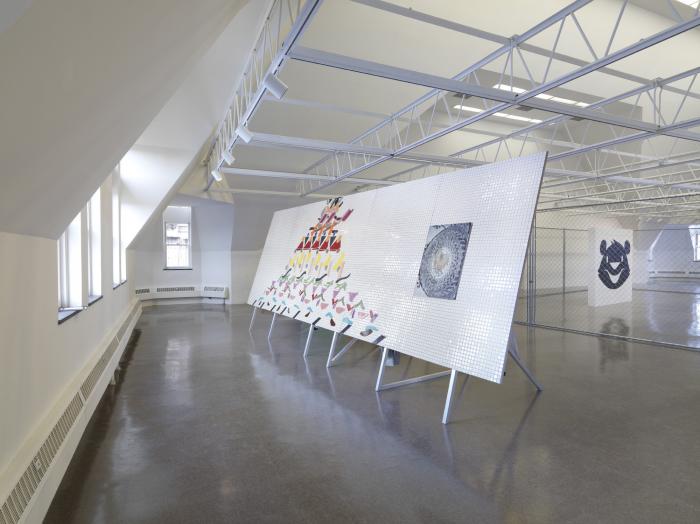 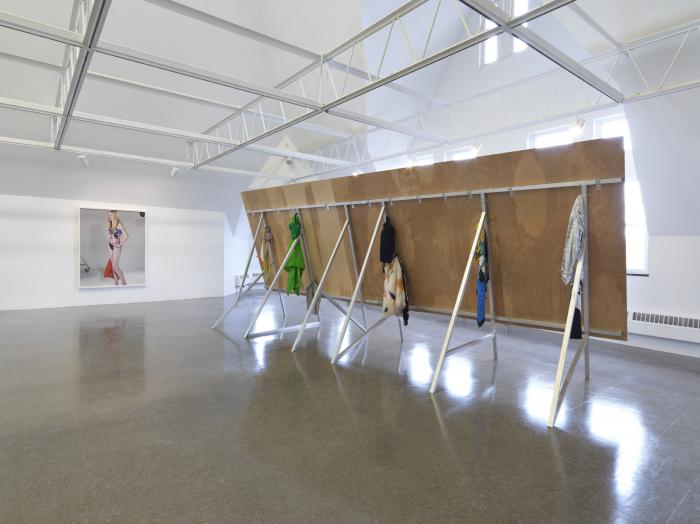 In terms of arrangement, the works are large but sparse, allowing the necessary “breathing room” for visitors to weave in and out of space. Colors and materials compliment each other, offering an overall cohesive experience. However, the content is challenging, as it does not match or realize the curatorial concept laid out by Hamza Walker. But upon digging in, it is clear that these works are not only stand ins for a right of passage, they are symbols for exploration into the romantic world of the paranormal as it references surrealism in a world flooded by YA fiction. “Teen Paranormal Romance” presents art that lives outside of itself by being upfront about its material and intentions—challenging the world to decide for itself from a few steps back. When confronted with these abstracted forms, it’s up to the visitor to decide where the poetry is and if indeed it is surreal.

Previous post SFAQ Pick: "I love you Me either" group exhibition at Project Native Informant, London.