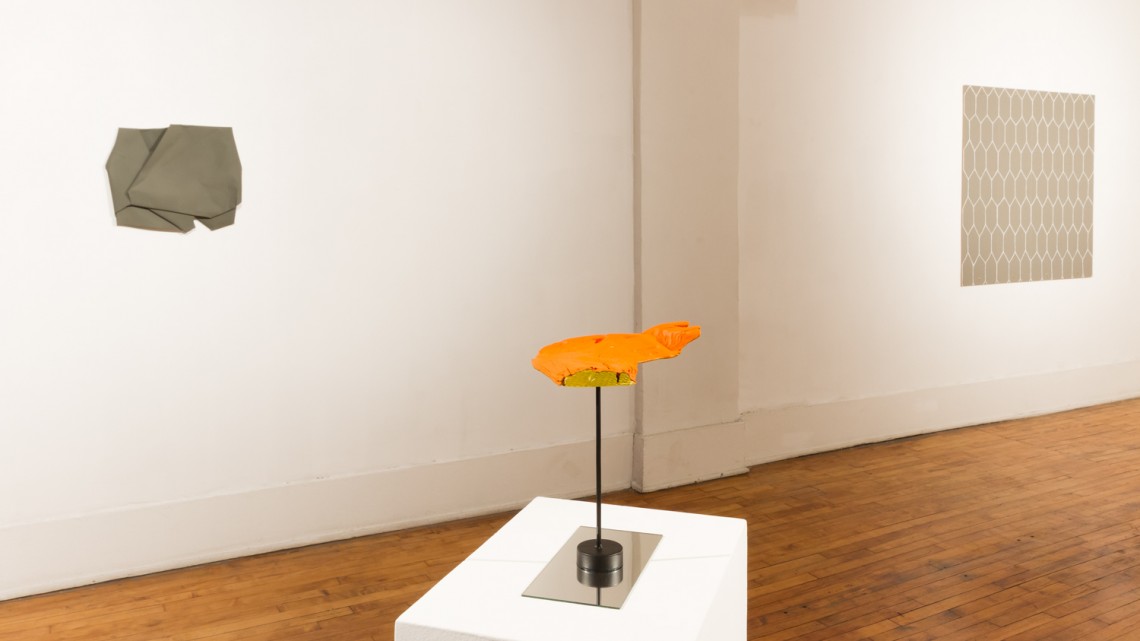 “Here Lies Space” is an exhibition that does not investigate space in terms of installation, but rather, one in which each individual work expands and contracts its own perception of capacity. The notion of space is one that many artists have explored throughout time. Most notably of which was Yves Klein. Through painting, sculpture, and photographic record Klein challenged the identity of space. The title of this show (also the title of a Klein work from 1960) indicates that space resides here, in this moment and place. “Lie” of course can mean something other than “to be situated.” It can indicate a position in space when it reveals that a body or object is flat, fully reclined, or horizontal. Most commonly known, however, it can mean something that is actually fiction passing for truth. The work found hovering above Milwaukee Avenue in Heaven Gallery’s second floor space adheres to one or all of these definitions.

Two large rooms hold work by Robert Burnier, Aron Gent, Heather Mekkelson, Robert Chase Heishman and Jessica Taylor Caponigro. The work in “Here Lies Space” offers comprehensive scope as sculptures, paintings, and photographs sparsely find themselves occupying the space on and between these white walls. The way to work through this show is by entering the side gallery first and letting the lightly placed works ease into a broader understanding of the investigation of space. 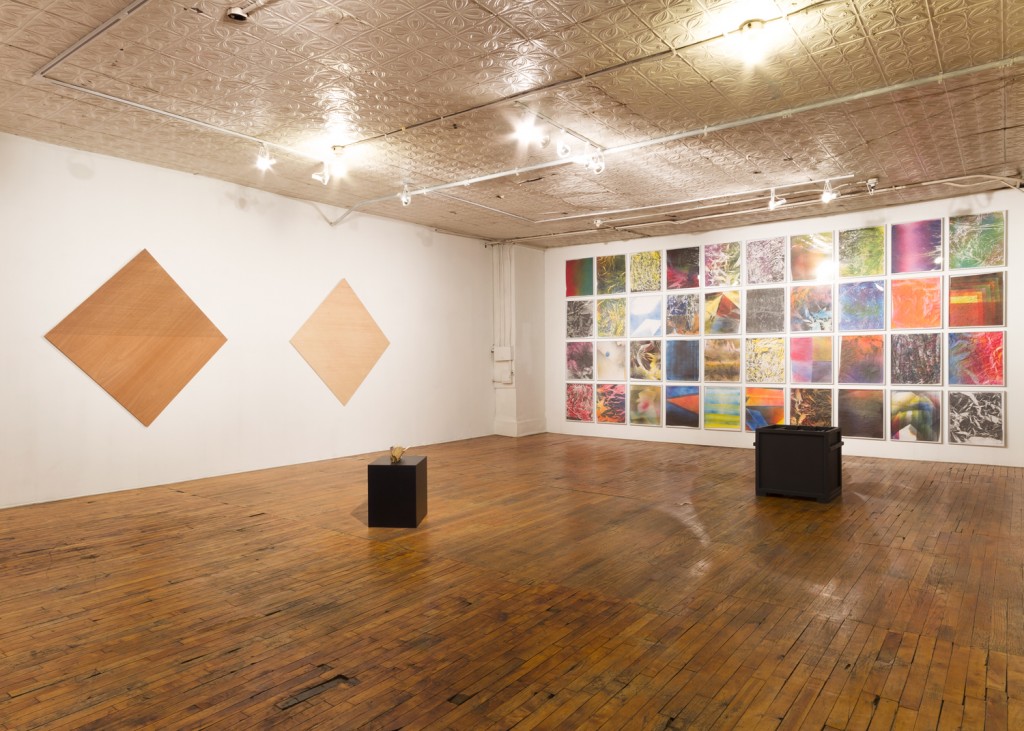 Each artist is represented by several works in “Here Lies Space,” which allows for an active and comparative analysis of the breadth of their work. Robert Burnier deals in large part with collapsing space that only exists in theory. “Lektrinkis” (2013) is a wall sculpture of sorts that illustrates a computer generated object/program/plane that has been collapsed, while these works resemble a John Chamberlain on the wall, they deal much more in systems and volume as a foldable entity. His use of matte paint on metal further implements the surface causing any light that may be reflected to be absorbed. Shadows, if any, sharpen, driving out any depth that may be present. “Atingi” (2014) and “Ten (Sanding)” (2014) are drawings and objects that successfully explain the multi-dimensionality of surface. The marks made by Burnier can’t help but feel dragged even though they are intended to be straight. The surface of the wood interacts with the pen in such a way that it imposes itself on the line causing it to falter as it is carried across the surface. The failed expectation of pattern can be found in Jessica Taylor Caponigro’s paintings. Like Burnier the artist’s mark is perceptible and imperative when reading the work. Caponigro’s “Stone Court” and “What Was, Was” are reminiscent of a décor that exists in the world but isn’t entirely place-able. This arrangement as an image similarly calls into question the inquisition of space in the two-dimensional realm. The facts of the pattern are presented as true but the creation alone is what falsifies their reality.

Experiences of chance are palpable in Aron Gent’s “Material Scrape” (2014), which resides on one large wall and consists of 40 framed pieces of butcher paper containing the excrements of a high end professional printer. Colorful peaks and valleys, scrapes and blobs, abstractly explode on each page submitting a sense of wonder as to how such an arrangement could have accidentally arrived on the paper and how the ink literally and figuratively shapes area. Peppered throughout the gallery are small sculptures by Heather Mekkelson. “Unrelated Split” (2013) consists of a mirror bisecting a small piece of metallic gold painted driftwood atop a dark pedestal. “Courser” (2013), half of a piece of wood painted and coated in wax is suspended upon a metal rod about 1 inch in diameter. This coupled with the pedestal holding “Unrelated Split” offer the sense that these pieces are specimens that require the visitor’s attention. Questions of origin and identity as related to the material arise as one circles the sculptures. 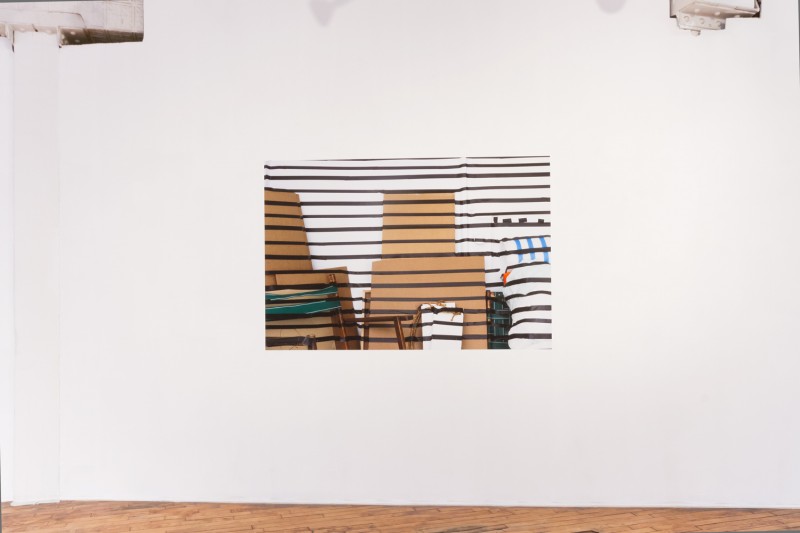 Robert Chase Heishman’s three works entitled, “_Img #17” “_Img #18” and “_Img #10” completely confuse real and imagined territory through photography. Visual indicators in the images are provided in the form of tape, creating stripes that flatten the field only to be disrupted by an object of volume beneath the lines. This tension complicates the photograph into confounding space. “Here Lies Space” takes on a topic nearly every visual artist is aware of when working but does so by investigating it on a conceptual level. The artists here are scrutinizing established forms of space rather than offering new definitions, which makes for a much more interesting study on the thing that surrounds and contains everything.