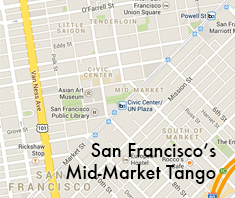 A partial view of “Windows Into the Tenderloin,” by Mona Caron. Image courtesy monacaron.com.

In 2011 San Francisco passed a payroll tax break for tech businesses in the “blighted” Mid-Market area, to retain established Tech companies and to attract new ones. The result of this was not lost on me the other Saturday on the corner of 9th and Market streets where the Friends Meeting House was hosting its food pantry, and the line of poor people snaked past a new complex where one-bedroom apartments go for $3250. “Staggering” is the only word I know for the economic and cultural divide between the city’s residents.

When I spoke with Darryl Smith, cofounder and artistic director of the Luggage Store Gallery, he pointed out that Mid-Market is part of a larger neighborhood, a concentric circle reaching up into the Tenderloin and down to South of Market. The Tenderloin is home to many Latin and Asian families, ethnic restaurants, art galleries, arts non-profits, and churches. Residential hotels and social services provide livelihood for the people who live there and help many who struggle with mental illness, homelessness, jail, poverty, and addiction. (In San Francisco it is illegal to lie down or sit on the streets—offenders face a $40 fine. You can lie for free on the pews of Saint Boniface church from 6 A.M. to 3 P.M.) Henri Quenette, a French director who made the recent film “Love Me Tenderloin,” told me that he felt that the Tenderloin is a containment zone, a city within a city. Children are hard to spot in this part of the city because of the dangerous streets. Many of the playgrounds are on roofs.

The front door of the Luggage Store. Photo by Lani Asher.

The Tenderloin is also home to public art projects focused on the idea of place. The Tenderloin National Forest, created by the Luggage Store Gallery, transformed drug-ridden Cohen Alley into a permanent community commons that is one of the few open spaces in this congested neighborhood. Mona Caron’s “Windows Into the Tenderloin” is a mural on the corner of Golden Gate and Jones featuring “views” of the neighborhood. Brian Goggin’s “Defenestration,” a rollicking installation of furniture falling out the windows of the old Hugo Hotel at the corner of 6th and Howard streets, is one of the seminal installations in San Francisco. (After surviving 17 years, it is scheduled to be demolished to make way for affordable housing; Goggins hopes to relocate the piece.) One of the most powerful murals in the city is Rigo 23’s “ONE TREE,” but alas, the building it’s painted on is for sale. 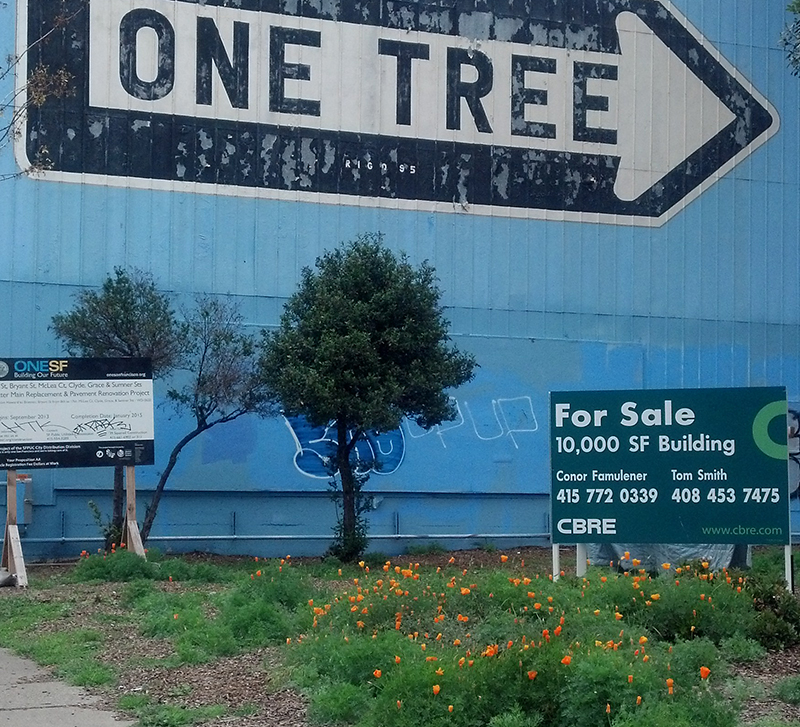 But there are reasons to be optimistic. 950-970 Market Street, an enormous mixed-use project going up near 5th and Market streets, is slated to open in 2018. In 2010, the for-profit real estate developer Group 1 invited the Kenneth Rainin Foundation to conduct feasibility studies for their future involvement in the arts and education portion of their development called 950 Market. Elvin Padilla is a board member of the non-profit 950 Market that will be the new home of many arts and education non-profits such as Youth Speaks, Blue Bear Music, All Stars Project, and Women Audio Mission. He notes that the city does not directly fund arts/education projects like this and that 950 Market is a complex relationship of individual investors, philanthropic groups, and new-market tax credits. Padilla believes that art can be a bridge between people, a healing force, a place for understanding, and can defuse violence. 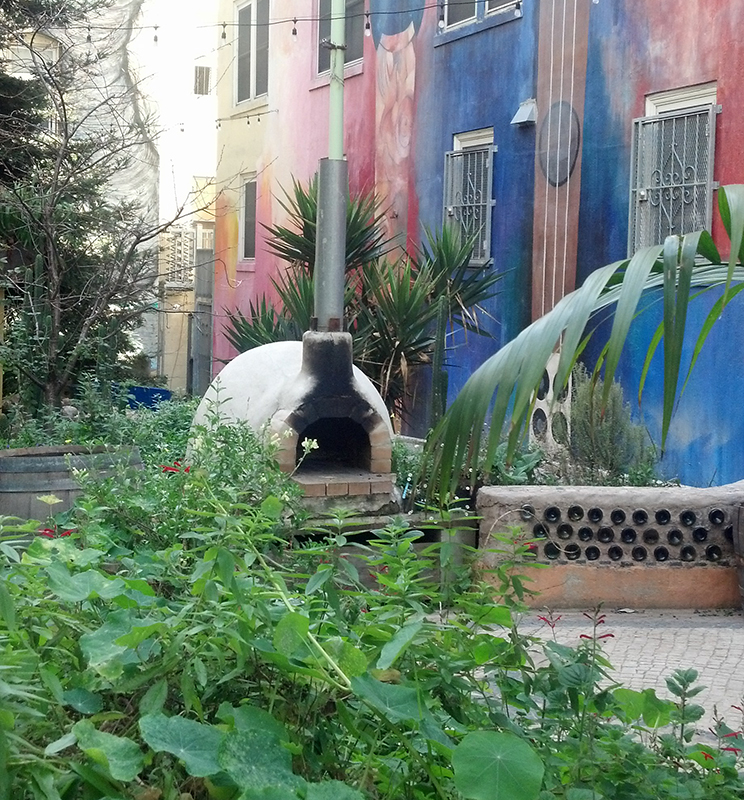 Shelley Trott, Director of Arts Strategy and Ventures at the Kenneth Rainin Foundation, lived through the first dot-com boom and realizes the urgency of saving existing art spaces. The Rainin Foundation, along with the Northern California Community Loan fund, created CAST (Community Arts Stabilization Trust), whose mission is to help stabilize at-risk arts group in the city. With $5,000,000 in seed money, the Rainin Foundation identified two arts organizations that needed help: Luggage Store Gallery, which shared a building with other owners who wanted to sell, and CounterPULSE, whose lease was soon to expire. CAST gave both organizations loans and a chance to buy permanent homes. The Luggage Store will stay at its present location and will house Hospitality House on its bottom floor. CounterPULSE, located around the corner from Twitter’s headquarters, will occupy the old Dollhouse Theater (the former porn palace at 80 Turk Street). Ivan Vera, Program Manager at Hospitality House, a community drop-in art center, cites increased sales and visibility because of their new location on Market Street as reasons for the support. Jessica Robinson Love, CounterPULSE’s Artistic Director, sees the theater as a meeting place for both community residents and tech employees. 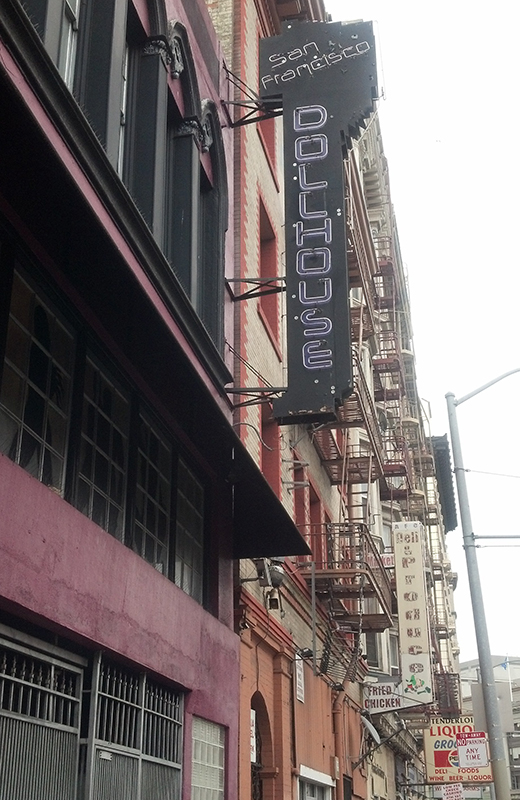 The K. Rainin Foundation is sponsoring a $100,000 grant called “Imagining Central Market,” a call to reimagine central Market Street as an art and technology center using “impactful art,” with special attention paid to collaboration between art and technology. These commissioned works will be installed on key blocks of central Market Street. CounterPULSE is planning an upcoming event in May with CODAME, a tech-focused arts group, to invite the public into its new building to create an art and tech playground. [freespace], a pop-up located underneath the non-profit SF Camerawork, is the brainchild of Ilana Lipsett and is modeled on the concept of a shared economy; its classes and activities are open to everyone in the neighborhood, and recently they sponsored “Hacktivation for the Homeless” that dozens of tech workers attended in the sanctuary of Glide Memorial Church. 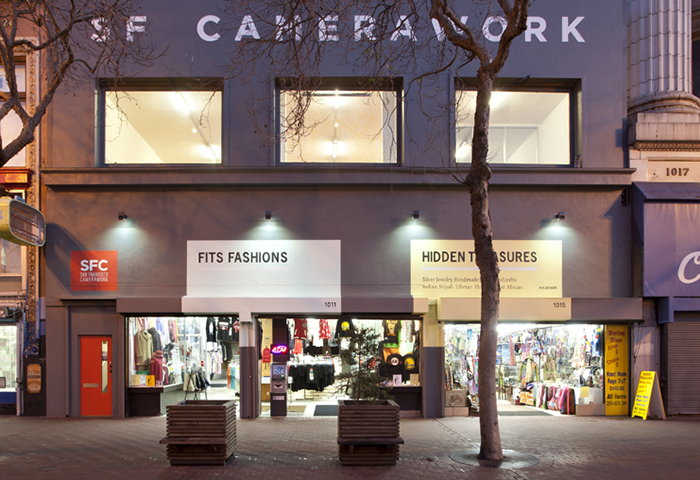 View of SF Camerawork and the pop-up [freespace]. Photo courtesy of Harrison Pollock.

Tiffany Apczynski is the Director of Social Responsibility at Zendesk. Since 2011, Zendesk has hosted a number of on-site art shows for neighborhood arts organizations and Tenderloin artists. They have reached out to The Cutting Ball Theater and look forward to working with CounterPULSE. Zendesk presents itself as part of an emerging micro-economy that supports diversity, but Apczynski realizes that the presence of tech company is a double-edged sword, especially in a poor neighborhood like the Tenderloin. Zendesk’s employees are encouraged to actively supporting the arts by buying art from artists, patronizing local galleries and non-profits, attending dance and theater performances, or volunteering at a non-profit.

In an article for “San Francisco Arts Quarterly” titled “Some Considerations Towards an Understanding of the Worlds of Art and Tech,” Peter Dobey says the art world and the tech world are different. He points to essential difference in their languages and observes that technology is a tool that can be used to make art, but art is not a tool but is open ended and with no practical application. In a recent article written for the London Review of Books, local author and activist Rebecca Solnit skewered the corporate narrative where “commerce is described as art and as revolution and huge corporations are portrayed as agents of the counterculture.”

Brian Goggin recent installation made in collaboration with Dorka Keehn “Caruso’s Dream,” on the front of 55 9th Street dangles over the Friend’s Meeting house. Photo courtesy of Michael Rauner.

David Talbot, founder of Salon.com, describes the rapid development happening in Mid-Market as a battle for the city’s soul, a battle in which commerce is valued over the social good. He notes that San Francisco’s vibrant open culture is the result of often violent political struggles begun in the ‘60s and ‘70s, and he fears that the enormous creative potential of the Internet has shifted towards applications that have market value but create no social capital. While the residents housed in SROs are secure because the landlords are not allowed to Ellis Act these buildings (a process in which landlords are legally allowed to get out of this business of renting homes), the homeless have no protection and can’t sit or lie on the streets. There is no commercial rent control in the city of San Francisco to protect galleries, artists, and arts non-profits that are engaged in day-to-day survival to pay their bills and stay creative. While CAST and the 950 Market arts complex are inspiring projects, corporate charity in lieu of taxes does not put money in the city’s coffers.

We have been through this before. We must not lack the political will to address the one-sided tax advantage. We must protect the most vulnerable of our citizens from eviction. And we must we support the arts and the human things that are precious and irreplaceable in San Francisco.

Previous contributions by Lani Asher include:

-“Buswhick: Looking Backwards into the Future”