Although the exhibition title might suggest otherwise, “Activities for a spare hour. Culture vultures. Feed your brain. Going in a group. Going solo. Mood. Chill” is a straightforward exhibition organized by the New York Lower East Side Gallery Bodega. Works from Gene Beery, Nicholas Buffon, and Nora Slade take up residence on Queer Thoughts pristine white walls in Pilsen. While small, these works exuberate confidence in the gallery and it becomes clear they were imagined for this space. 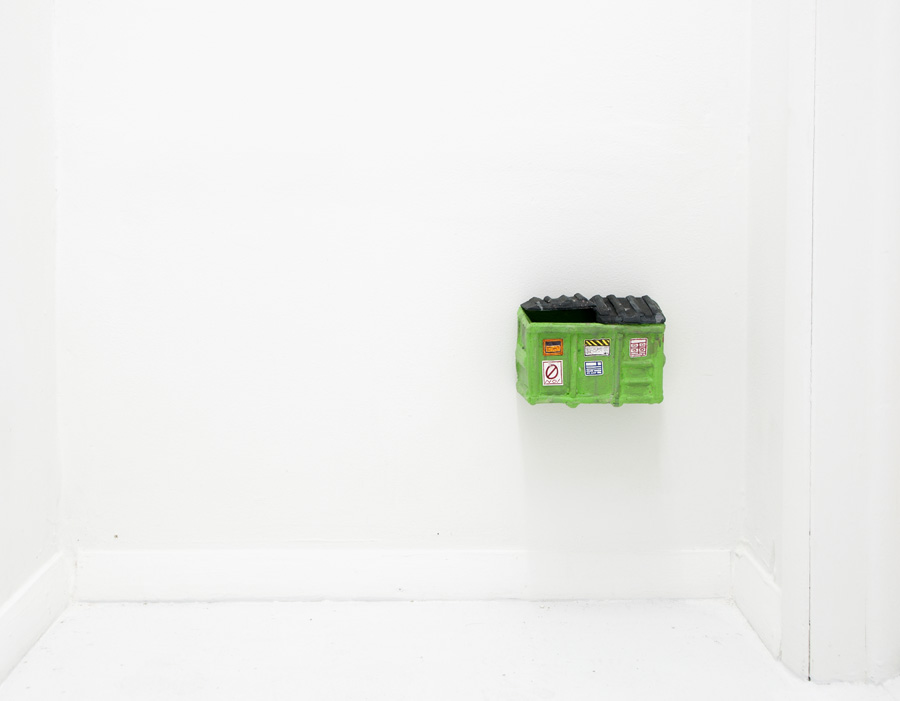 Perhaps it’s because of Nicholas Buffon’s “Dumpster Diving” (2014) and “Brooklyn Townhouse” (2014), but there is a sense of alternate reality in this exhibition. A brick sized dumpster is displayed on the wall, in a corner, just high enough off the floor to be out of reach for a mouse or creature small enough to live in Buffon’s world. No detail is left to the imagination, this dumpster is dirty and plastered with stickers carrying warnings from the city it presumably belongs to. The stark white light of the gallery causes all of the work to feel frozen in time, but especially Buffon’s. Every detail in “Brooklyn Townhouse” and “Dumpster Diving” indicates that these objects have lived a long and fruitful life. Should one need further proof, they only need to look closer. 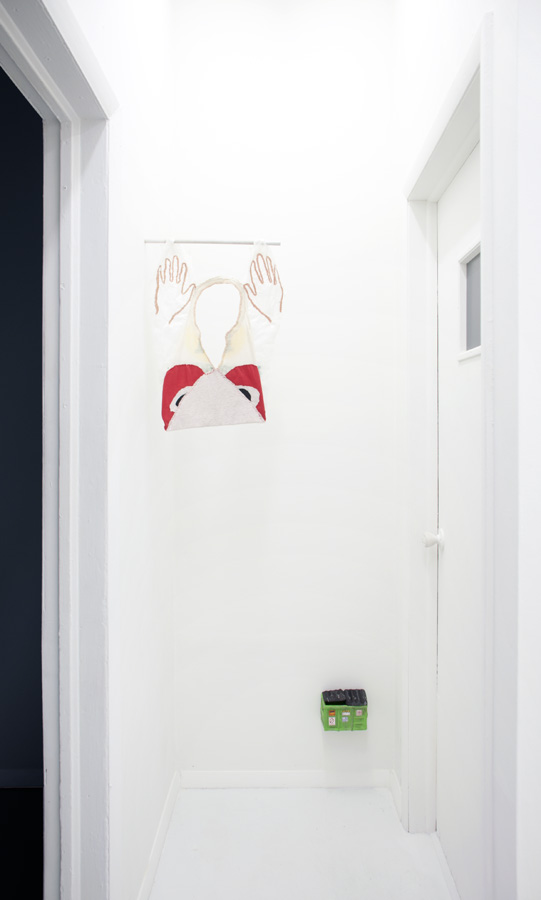 Nora Slade, The Sock and The Shoe (2013). Mixed media.
Courtesy of Queer Thoughts.

Seemingly a million miles above Buffon’s dumpster, but located in the same nook is a work by Nora Slade, “Twofold (My Funny Valentine)” (2012). This t-shirt of sorts hangs like a flag protruding from the wall its embroidered plastic bag material translucent and opulent. A stitched portal in place of a head and face is surrounded on either side by raised open-faced hands, the sentiment could read as jubilant or a warning, but there is something about this work that feels holy. Within eyesight, also dangling not far from the ceiling is “The Sock and the Shoe” (2013). A bubblegum pink colored strip of plastic the width and length of flypaper appears to have caught a baby’s bootie from 1980 as scrawled on the sole of the shoe. The baby’s bootie appears to have caught some discarded material with a pseudo unrecognizable image on one side resembling a cartoon tongue, or, of a more anatomical nature, labia. For Slade the tension in the work is derived from it’s placement at the cusp of gravity and the representation of openings, by standing under the work the viewer is given a sense of urgency that more harm could be done if these pieces were to succumb to this fundamental law of nature.

There is playfulness to this show through the use of crafty materials and embedded humor and the artist offering the most levity is Gene Beery.  “Self Portrait 3 ½ Stars” is a small painting with the word “Life” scrawled in black in the upper left hand corner, beneath it the outlines of 5 stars, 3 ½ of them filled in. This work’s lightness depends on the viewers understanding that it doesn’t matter what has happened to anyone in particular, most of the time life doesn’t deserve 5 stars. The outline of a t-shirt strewn on a flat surface has the phrase “Folly Buster” painted on it in black, and “Folly Buster – Art Doesn’t Lie” (2011) is just opposite of “Self Portrait 3 ½ stars” as if one is a symptom of the other. Finally in a separate small room with high ceilings “Scallions” (2014) can be found. A framed image of chopped scallions making their way into (or out of) a drain, the blue rubber band, which surely held them together at one time, is discarded in the sink next to the chopped green mess. The phrase “Tasty scallions like art, prevent the entropic, slide of life into meaninglessness, and worse.” The seriousness of the text typed in a calligraphic font coupled with the blunt image does not leave cause for concern but rather one for a dark and humorous contemplation regarding the intersection of art and life. “Activities for a spare hour. Culture vultures. Feed your brain. Going in a group. Going solo. Mood. Chill,” offers a presentation of works that create that intersection by representing both art and life, all of it’s ups and downs, humors and sadness, and endless possibilities in imagination.

“Activities for a spare hour. Culture vultures. Feed your brain. Going in a group. Going solo. Mood. Chill” is on view through May 4, 2014.