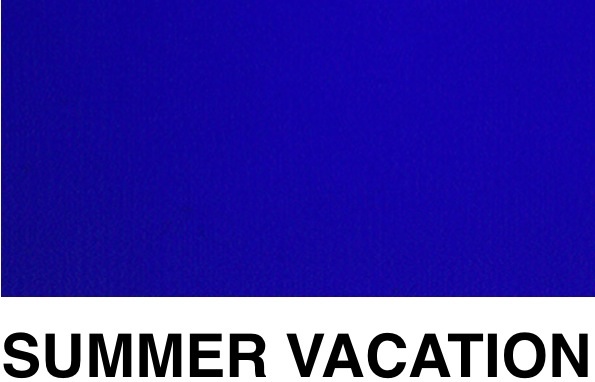 My ideal morning begins by swimming in the ocean, emerging from the sea every day like life at the very start.

IMPOSSIBLE GOAL: learn to write the full-body pleasures of swimming—rhythms, sensations, color, light, matter, all at once.

I’ve been thinking a lot about blue because I am “blue,” meaning I’m melancholy and I’m very happy too.

But the waters of Miami beach are a greenish soda-lime glass.

A shallow shelf of white sand reflects so much sun into the sky, which is often almost white.

Dorothea Rockburne showed me a beautiful new drawing: copper wire on a ground of pure indigo.

She once painted her studio walls that blue and keyed her paintings to it—”a very mannerist idea” she says.

For NIGHT TIDE I painted over a mural in the office with indigo paint—a gesture I’ll call “ODE TO DOROTHEA”. 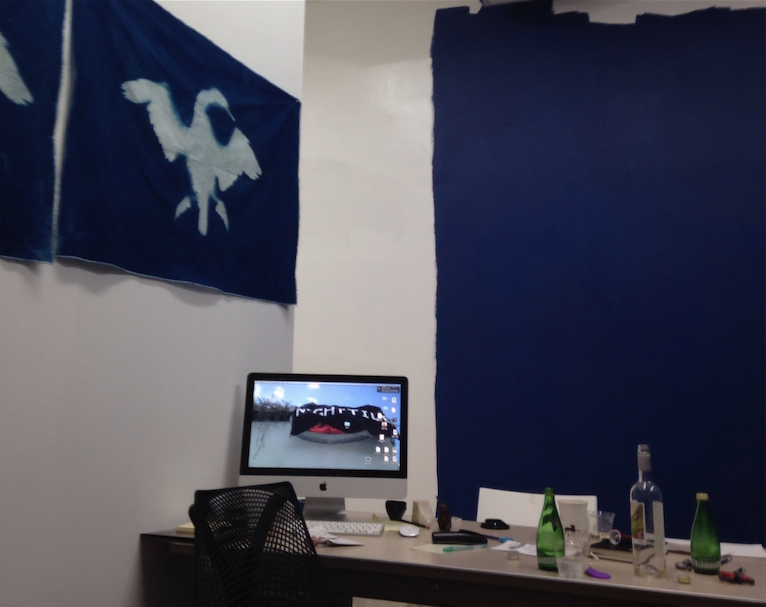 It is almost the same Prussian Blue of Christy Gast’s cyanotypes which I put on the wall over the desk.

After the NIGHT TIDE opening on Saturday we went to greet the other night tide.

I stripped to my underwear and rolled in the surf leaving my new clothes in a pile on the sand.

“We always go for a swim after a party,” says Tracy Lord in “The Philadelphia Story”. 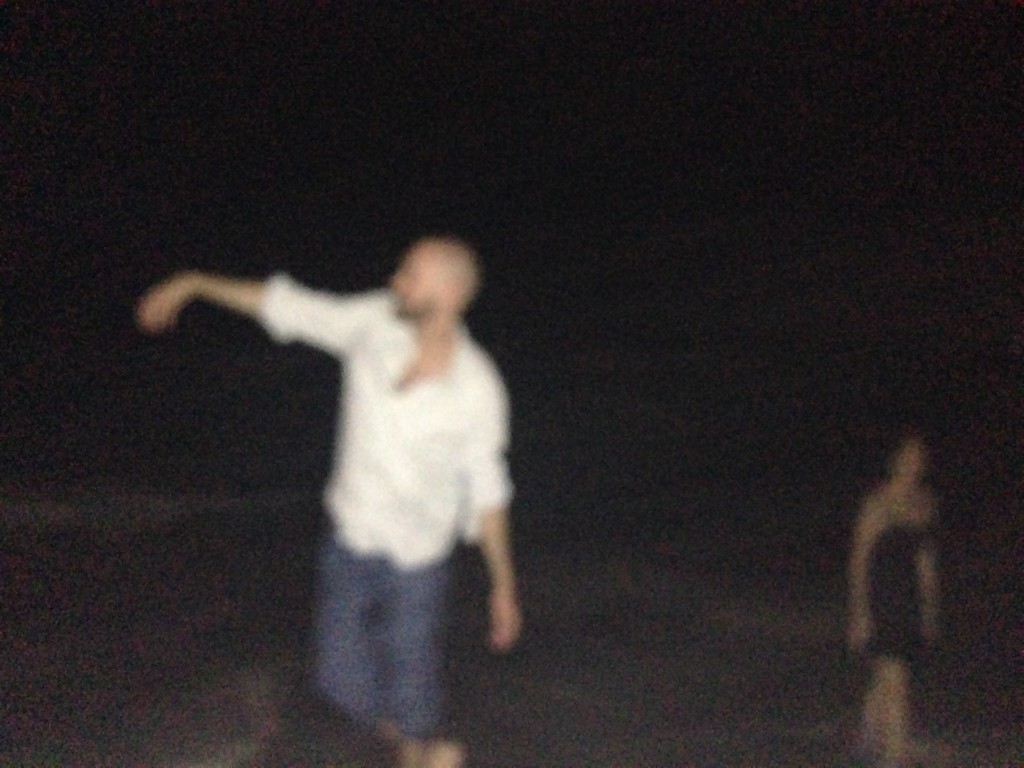 A few weeks ago I went to see Carolee Schneemann introduce Derek Jarman’s “Blue” (1993) at Lincoln Center as part of the series “Art of the Real.”

She and Derek Jarman are among my most beloved and admired artists.

IMPOSSIBLE GOAL: to talk about “blue” the color or “Blue” the film.

Her introduction created textures of feeling by layering words in three voices—hers, Derek’s, and someone who confronted their own death—typed out on notecards.

Here are my transcribed excerpts of Carolee Schneemann on Derek Jarman’s “Blue”, I’ve thought about it deeply and want to share some parts for those who couldn’t be there:

The ethereal experience continues as expansion
until it surpasses the original size of the main aura.

The color is very beautiful, very pale sky blue,
shot through with millions of white and silver sparks.
It also demonstrates a peculiar cool, tingly, fuzzy feeling.
A lot of energy to be sensed in this, but not the normal vitality
type of energy.

Pearl fissures in azure seas.
Deep waters washing the Isle of the Dead in coral harbors.
Amphora spill gold across the still sealed.
We be there.
We’re there, fanned by the billowing sails
forgotten ships tossed by the mournful winds,
the winds of the deep lost boys.
Boys sleep forever in a dear embrace.
Soft lips touching, touching
in submarine gardens
cool, marble, fingers,
touch an antique scale.
The smell, sounds, whisper,
deep love—drifting on the tide forever.

The smell of him
dead.
Good looking in beauty’s summer.
His blue jeans.
His blue eyes.

We have both been given devotion to swimming in our close waters.
Only gradually is Derek told that the North Sea is toxic, its poisonous—
there is radioactive leakage from the local nuclear works.
Only gradually I am told that my river, the Wallkill where I swim daily,
is toxic with poisonous farm runoff.

From time to time I travel back to London;
Derek says: please call me, be sure to call me.
Between the late 1980s and early 1990s
Derek will be slowly losing his sight.
The worst of the illness of uncertainty—
I’ve played this scenario back and forth
each hour of the day for the last six years.

He wants to give me all his books.
He takes me to his favorite book shop
and takes the books down from the shelves.
Everyone he greets is responsive, ardently.

He says: “I caught myself looking at shoes in a shop window
I thought of going in and buying a pair but stopped myself—
the shoes I’m wearing at the moment should be sufficient to walk me out of life.”
“The damaged retina has started to peel away,
leaving the innumerable black floaters
like a flock of starlings around in the twilight.”

“My mind is bright as a button but my body is falling apart.
A naked lightbulb in a dark and ruined room.”

Blue is the most agile of our palate.

We were in essence painters,
each sharing a vocabulary of the visual,
of perception,
of the audacity,
to mix, enlarge, tear-up, superimpose
until these blues seal over us.

Teeth chattering,
February cold as death
pushes at the bed sheets
an aching cold interminable as marble.
My mind frosted with drugs
ices up a draft of snowflakes
whiling up memory
a blinkered twister
circling in spirals, cross-eyed,
meddlesome consciousness
Shall I?
Will I?
Dueling death–
mind how you go.

Singing the blues
Blue bells
Blue balls
There are never blue roses.
There are no blue cats. 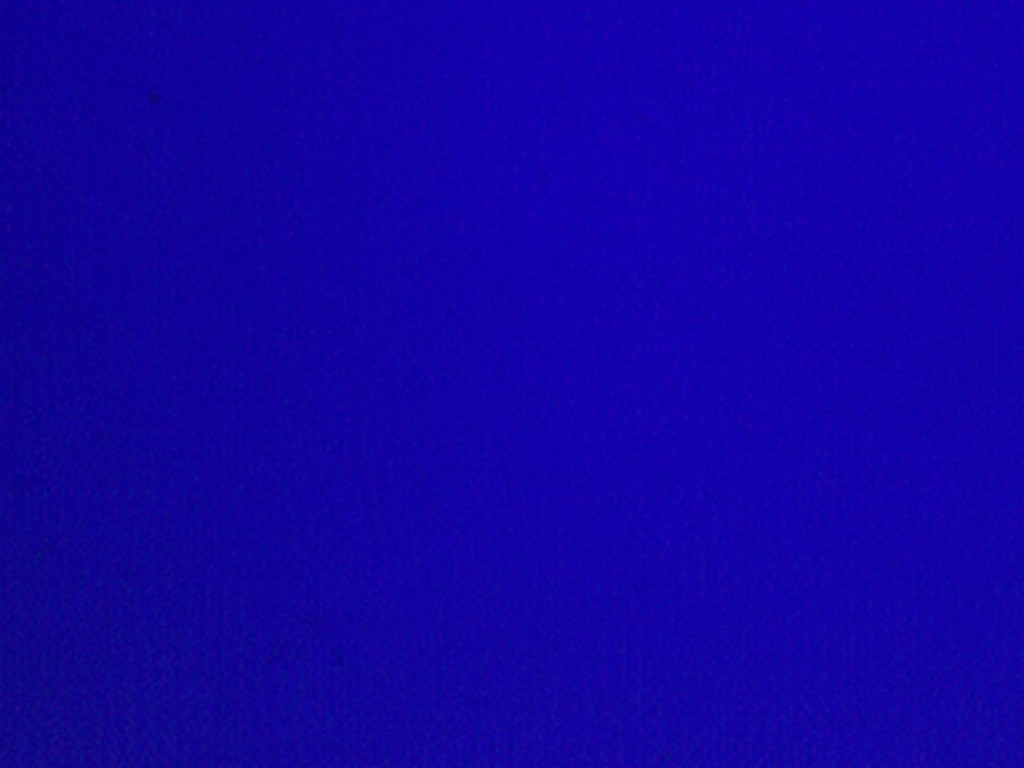