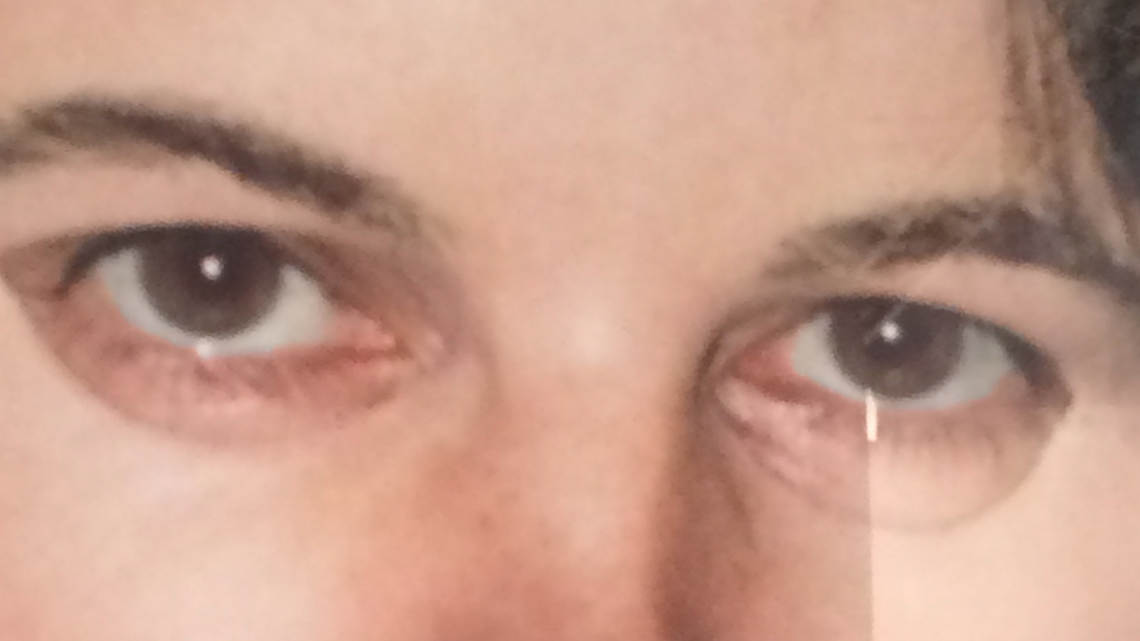 Art Basel, as is to be expected, blends the young, bright, and opulent, with the well known and proven names of galleries and artists whose work is most often capable of standing on its own and retaining its integrity despite the shopping mall atmosphere. Work that beguiles the five senses, luring you in with aesthetic ocular trickery, pops up behind every booth’s bend. Happily, much more content-based video and even a few performances were on view, as is often lacking from other art fairs of such caliber. Visceral, corporeal work seemed at least as present as the purely abstract. 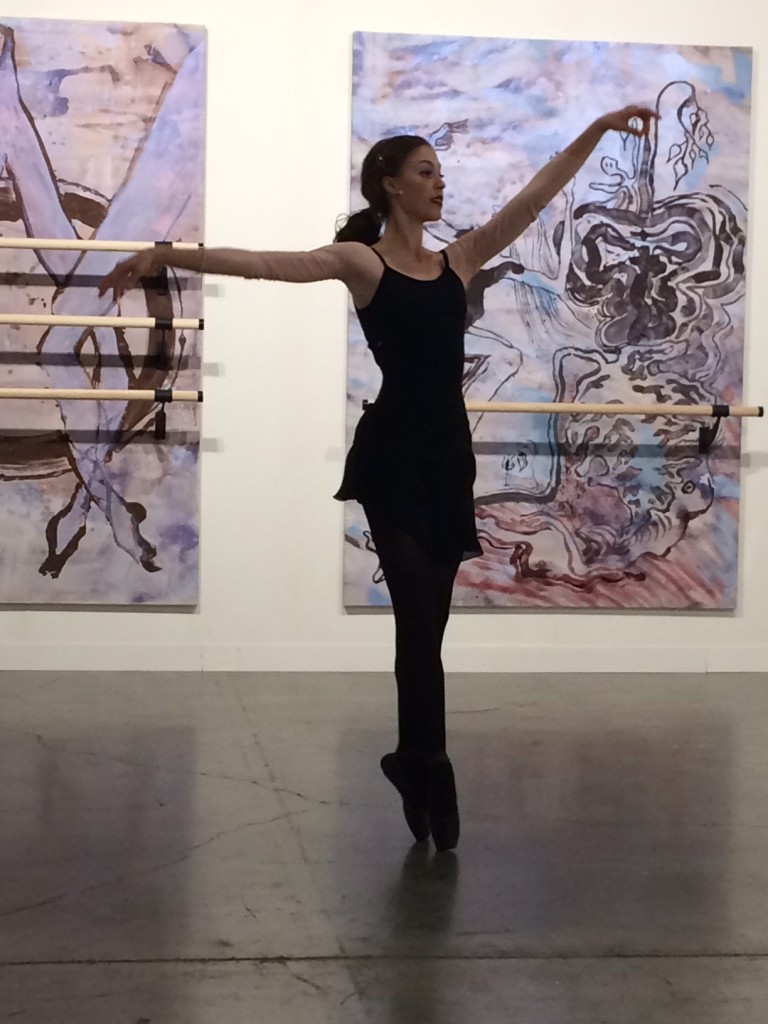 Naomi Fisher’s ballet performances scheduled every day from 3-5 p.m. were set in front of her large-scale paintings that echo the long graceful legs of the piece’s dancers. As they pranced on point without any music accompaniment, their whimsical movements seemed to extend the paintings into the surrounding space as if through osmosis. 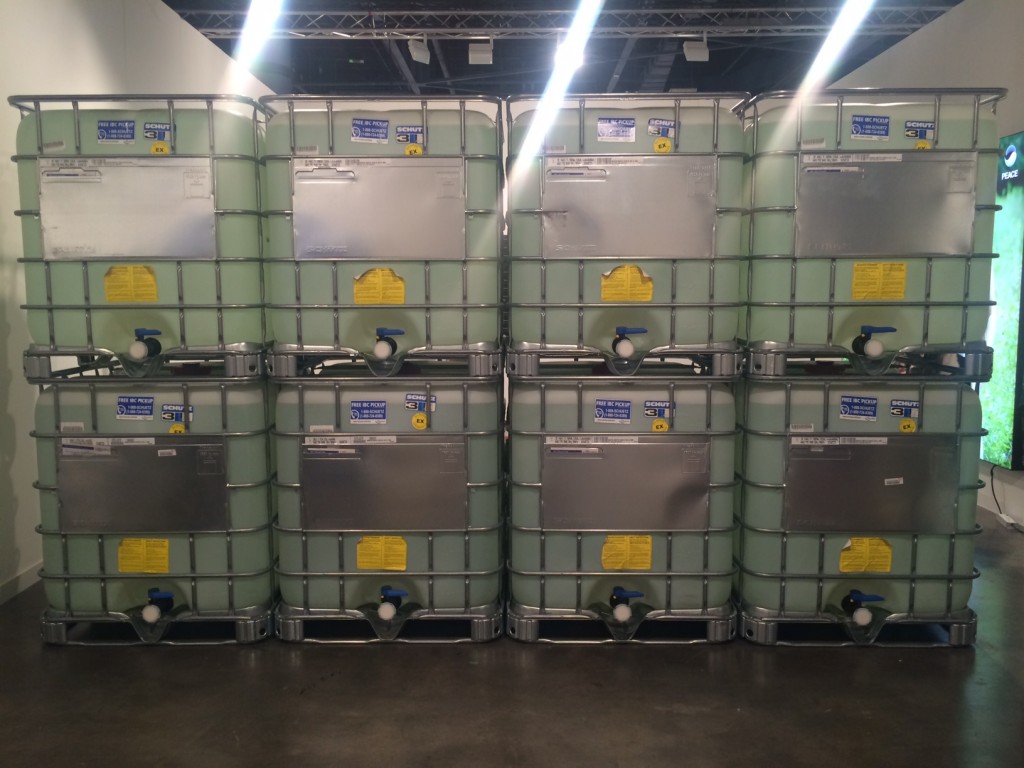 Sean Raspet’s large installation of transparent plastic tanks filled with water infused with the chemicals that create artificial grape flavor for drinks of all saccharine varieties were boldly clunked at the entrance to Société Berlin’s booth creating a wall unto themselves. 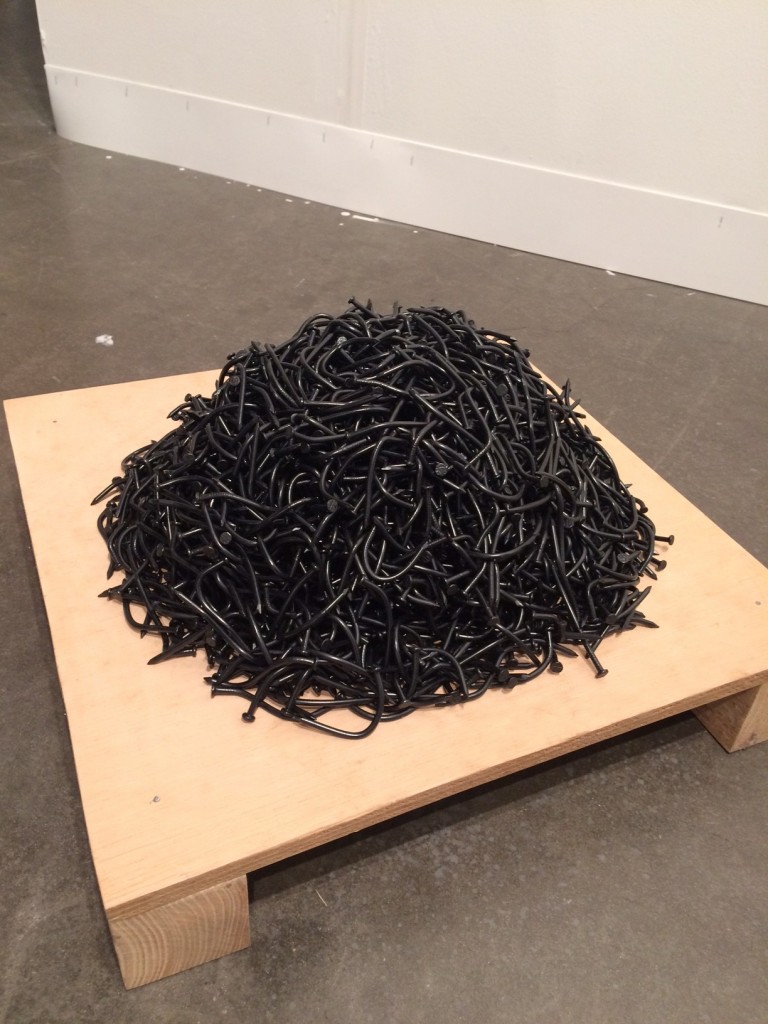 A floor sculpture by Alexandre Brandao recalled Japanese cuisine with a large pile of tubes that looked uncannily like squid in noodles. 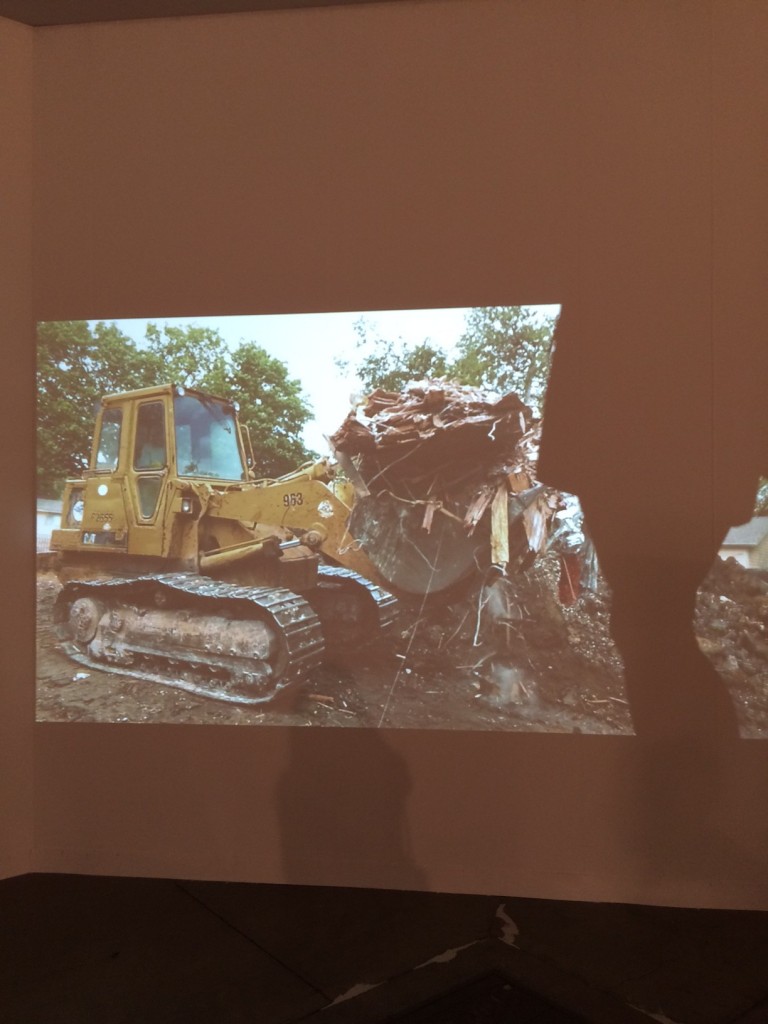 Lara Almarcegui had a darkened corner video installation that depicted the destruction of a small barn or farmhouse that drastically differed from the flashy, shiny sculptures visible in all directions. 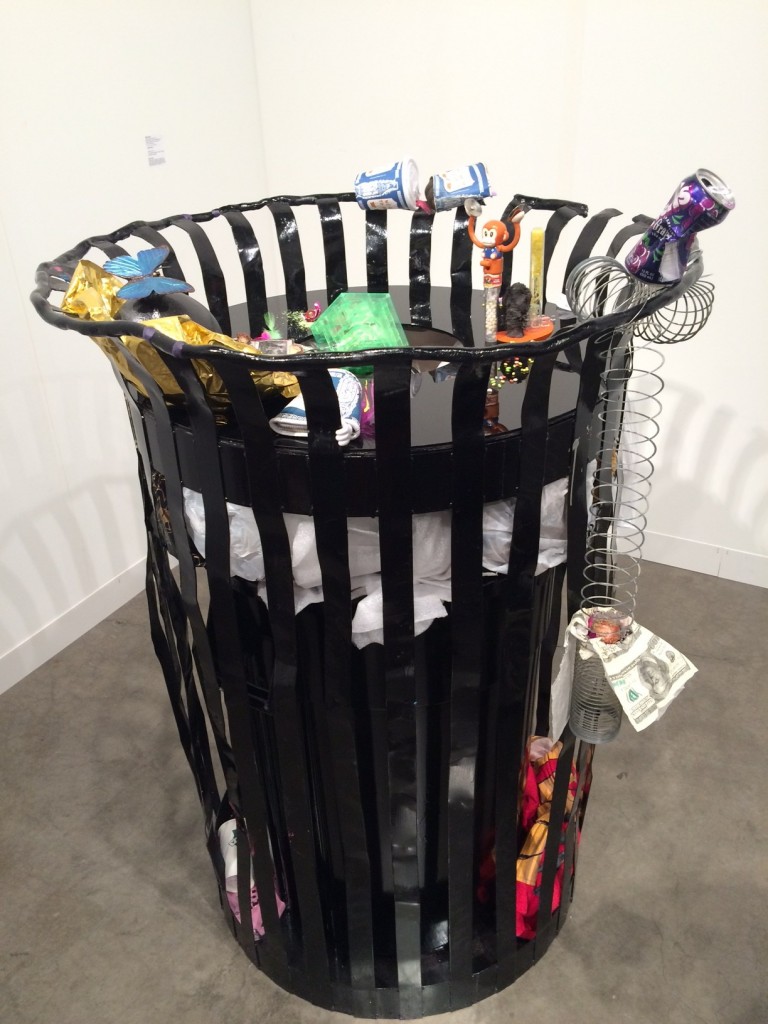 At 47 Canal, Ajay Kurian’s sculptures of shiny black trash cans felt more like animations or caricatures of a New York street corner in the 1980s, complete with sculptural trash coffee cups in their signature blue and white bodega cups. 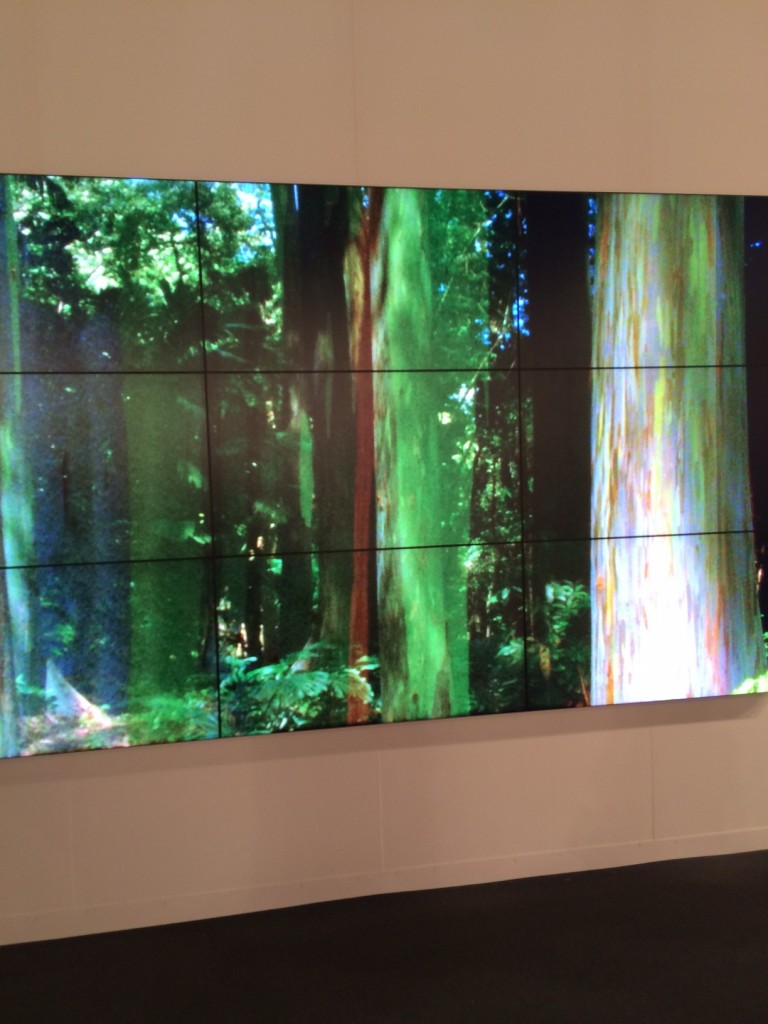 Diana Thater’s large moving-image wall piece of a sunny forest captivated viewers, young and old, with its lush green tones, leaves, and mist moving so slowly across the screen it was almost impossible to decipher whether it was a photo or a video. 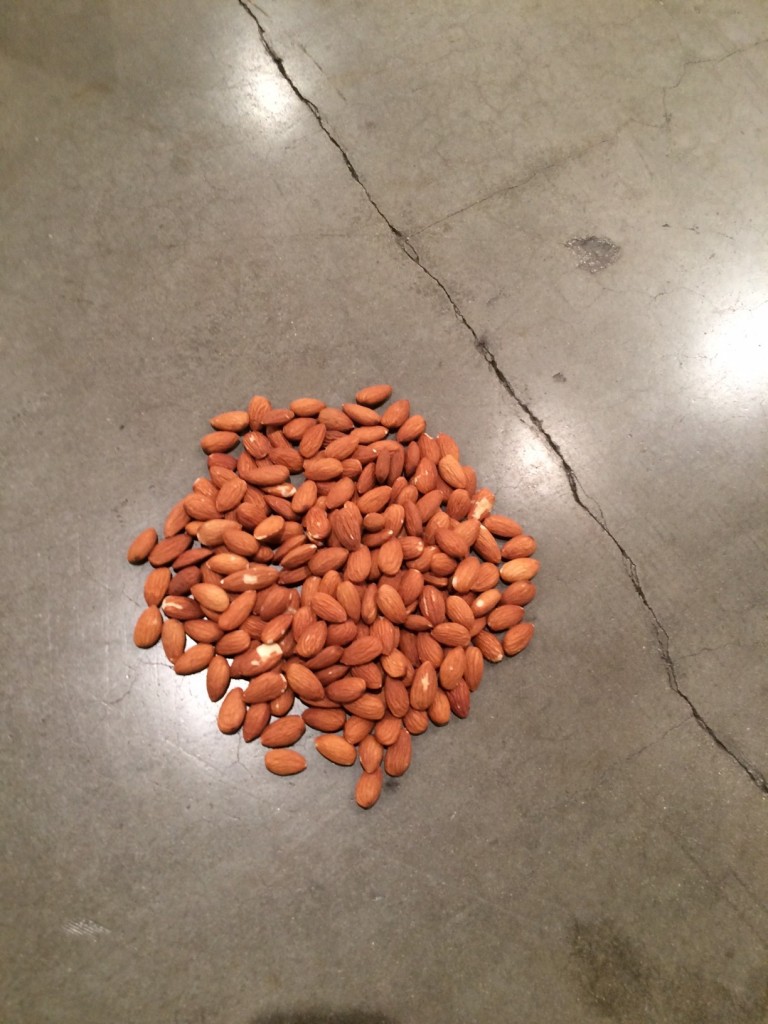 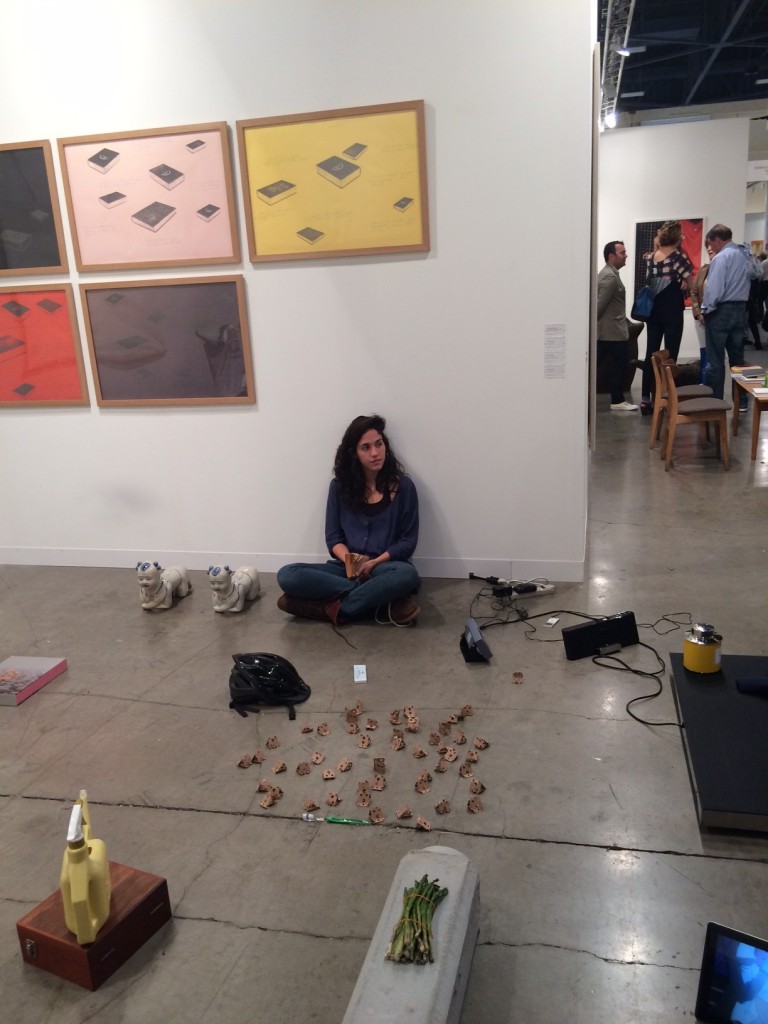 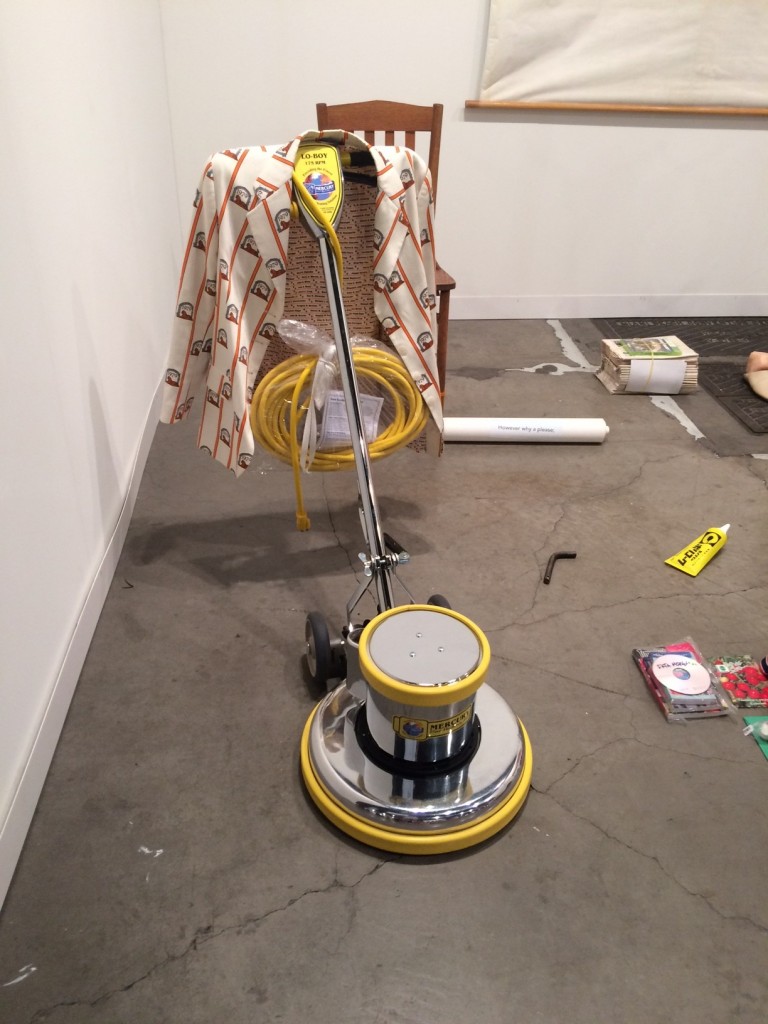 The only performance other than Fisher’s ballet was much more subdued and somewhat off-putting, but perhaps in a good way. At Andrew Kreps, Darren Bader’s sprawling floor installation of found items almost arranged in a circle—a bundle of asparagus laying on a concrete plank, and bras and vacuums from the 1950s—all surrounded an unassuming young brown-haired woman who sat lifelessly next to a portable recorder playing an unrecognizable, slow ballad. 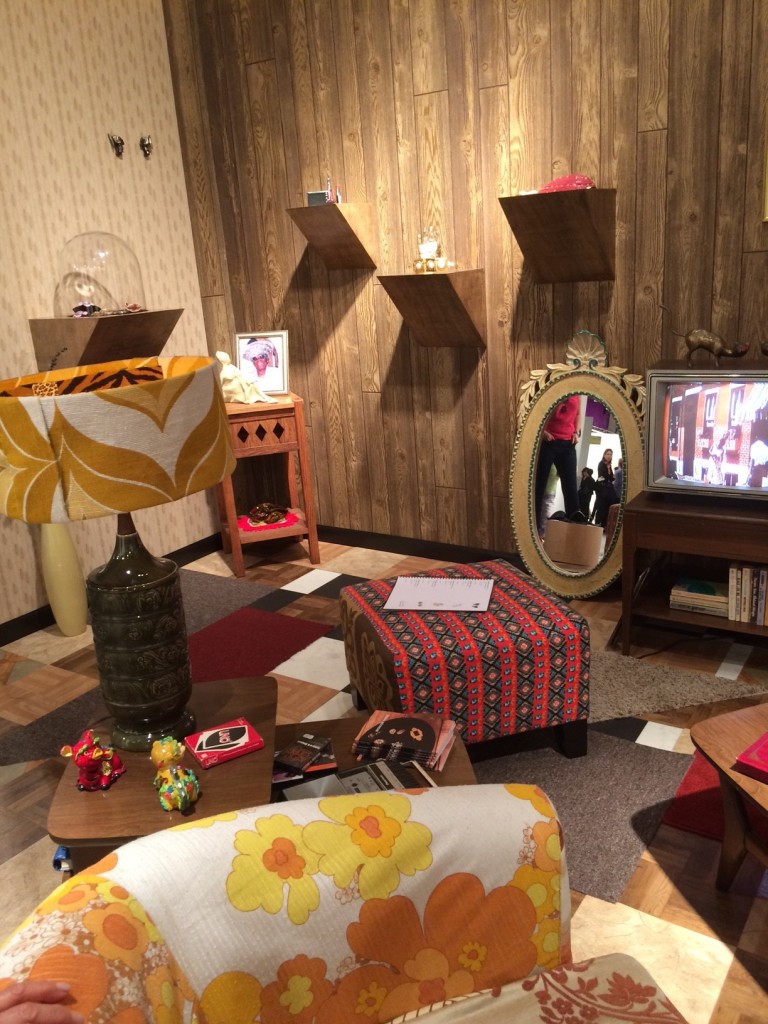 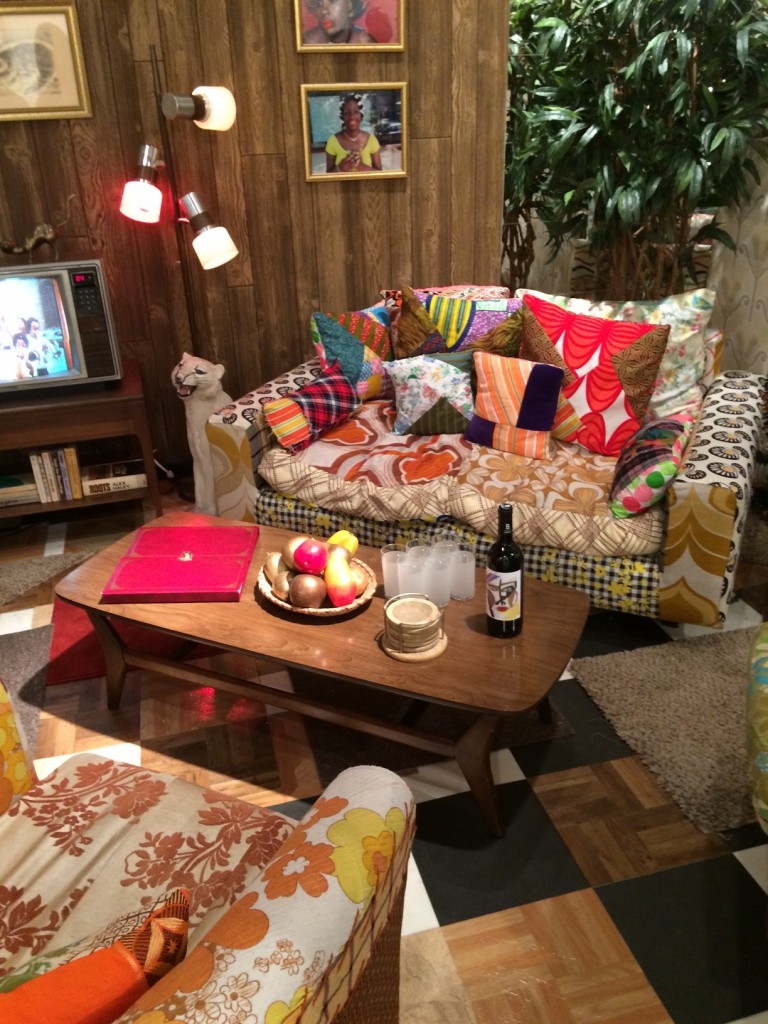 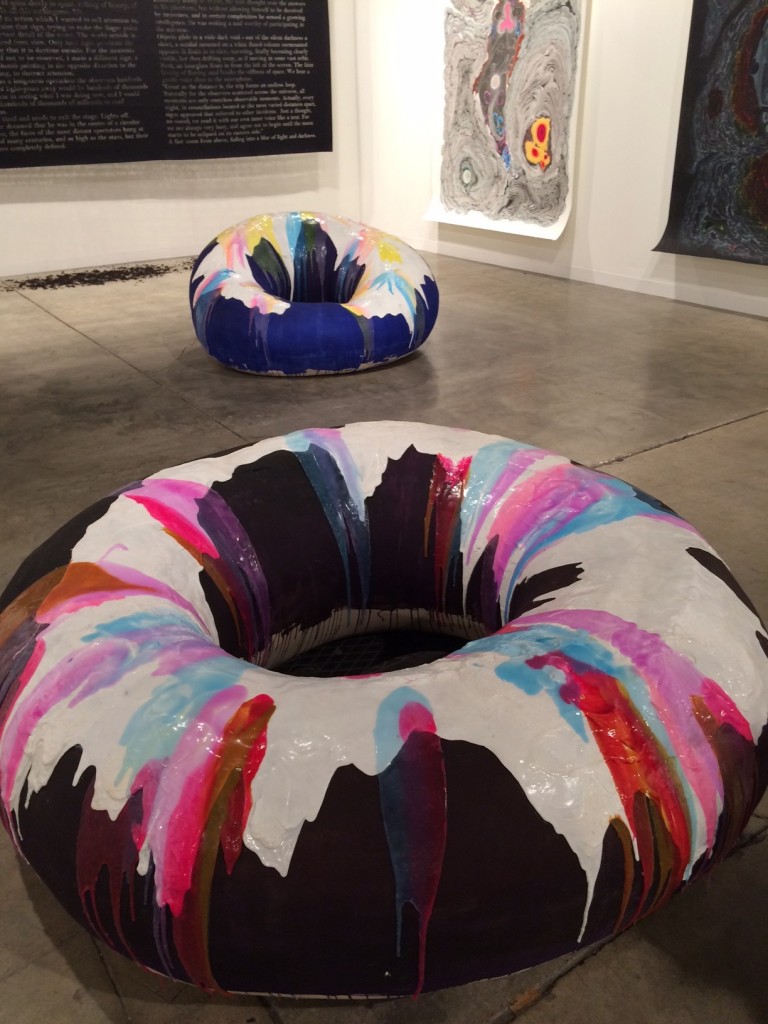 Nearby, more food related work, blown out to the most painterly proportions, was Nathalie Djurberg’s colorful large donut sculptures at Milan’s Gió Marconi.

Among the few Kabinett projects installed throughout various galleries was Robert Wilson’s dark interior installation of slowly moving images of women in a range of compromising positions while a monotonous voice-over of a woman rapidly repeats the description of an uncomfortable sexual encounter. 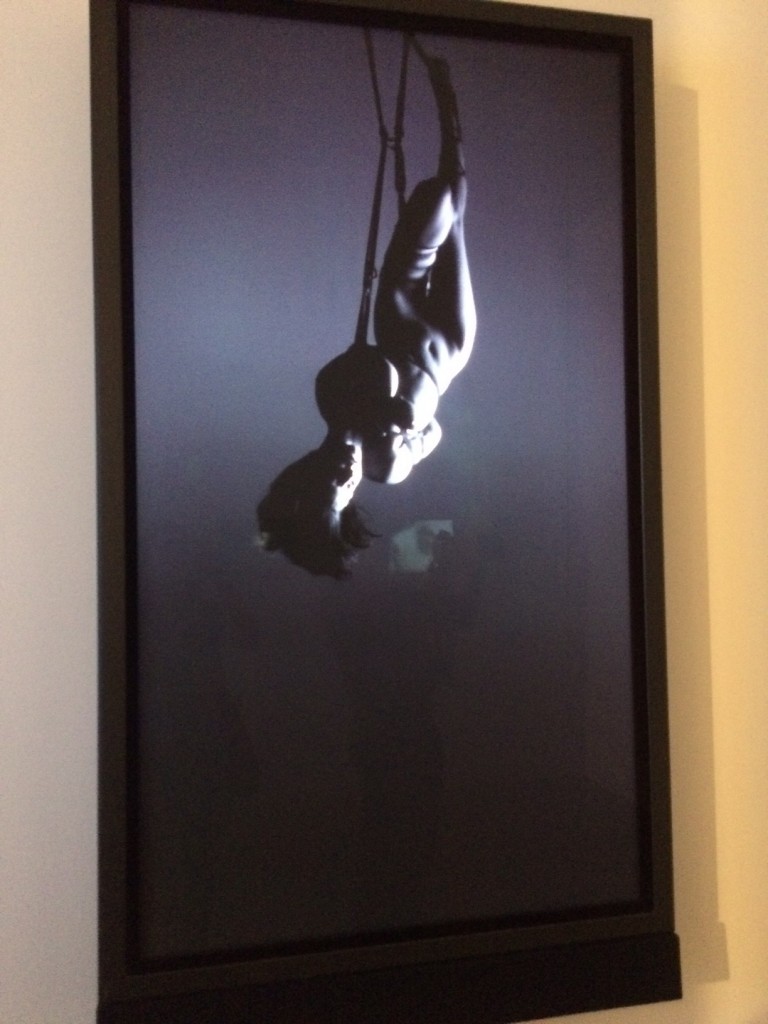 Also invoking constraints of a less personal nature was Jose Dávila’s large glass sculpture, which stood tall and appeared to blossom like a geometric flower while bright orange suspension-like straps seemed to hold it together. 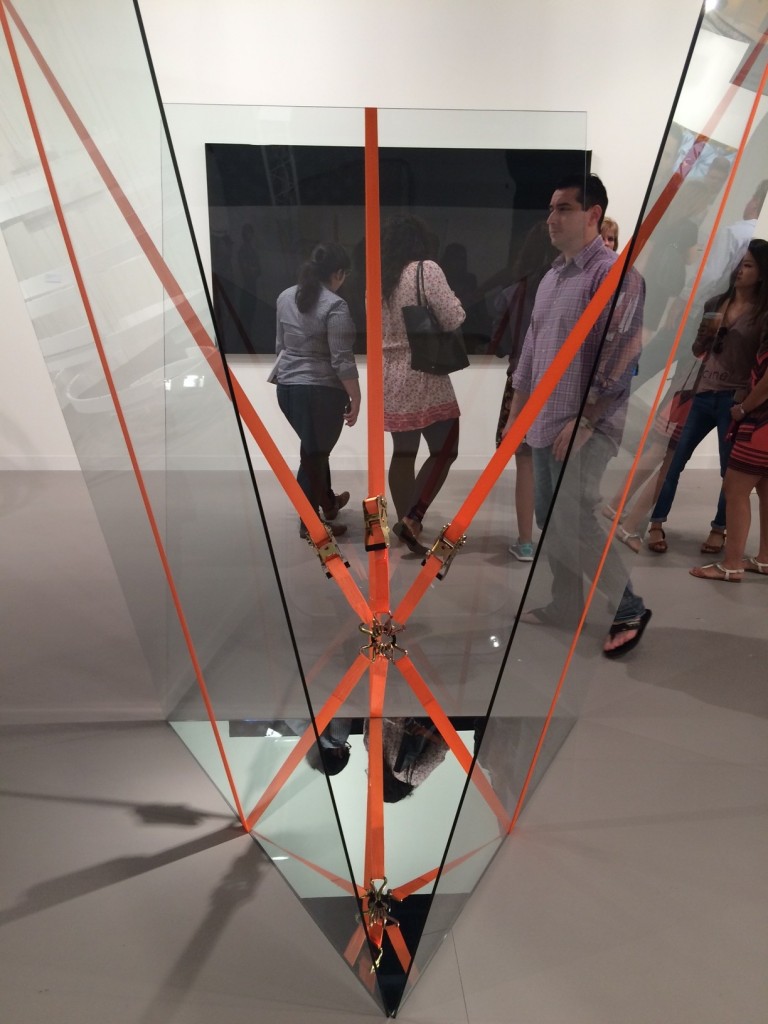 At Regen Projects, a diverse group of works were on view, the most alluring of which was one of many of Gillian Wearing’s haunting self-portraits, while at first glance look nice and normal, upon further inspection it becomes clear she is wearing an extremely realistic mask; an exact copy of her own face detectable only by the small amount of her actual skin visible around her eyes that stare out. 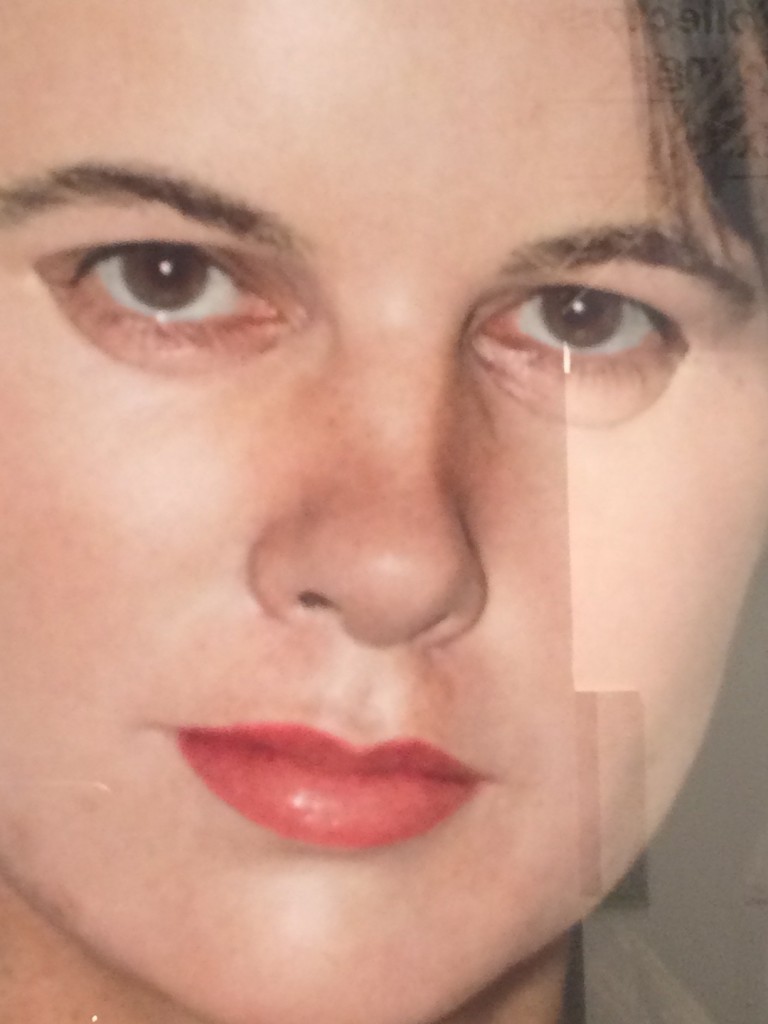 On a playful note, Alex Katz used large-scale painting to humorous ends with a muted pink-washed canvas that acts as a flattened reflection, a singular painting that mimics a diptych, depicting a ‘50s-style couple one might have found in their mother’s old etiquette booklet, dancing front to back, back to front. 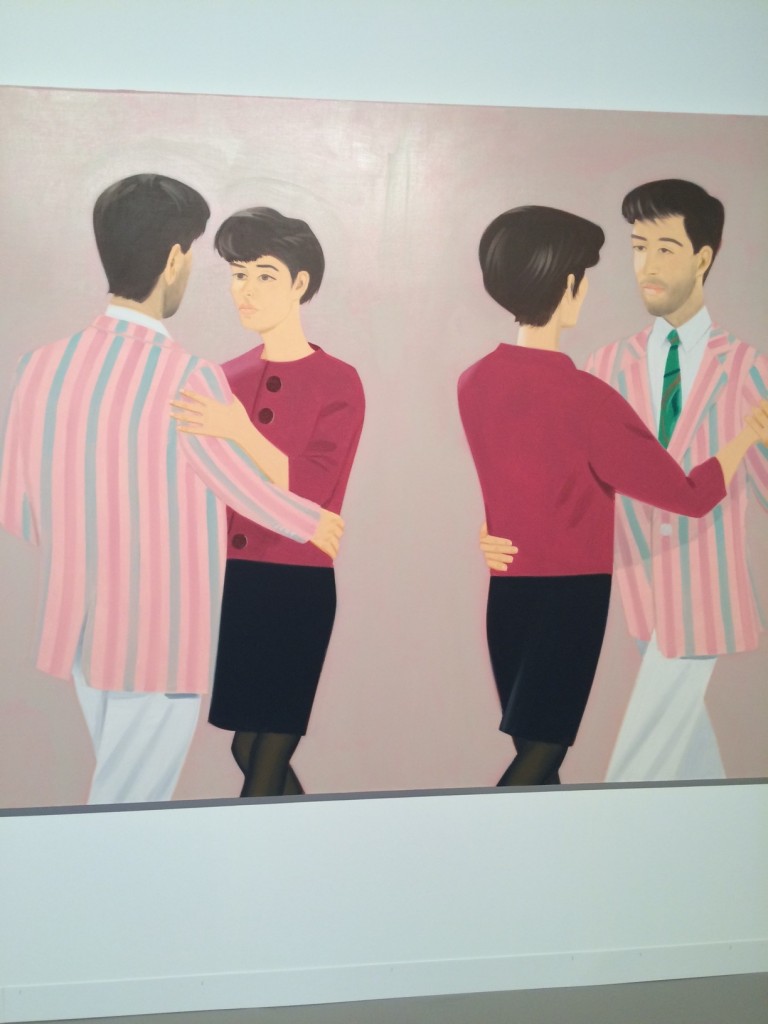 An unusual piece for Chinese artist Xu Zhen, a burnt-orange tent with church steeples rising out of its sides, stood ominously at Shanghai Art. 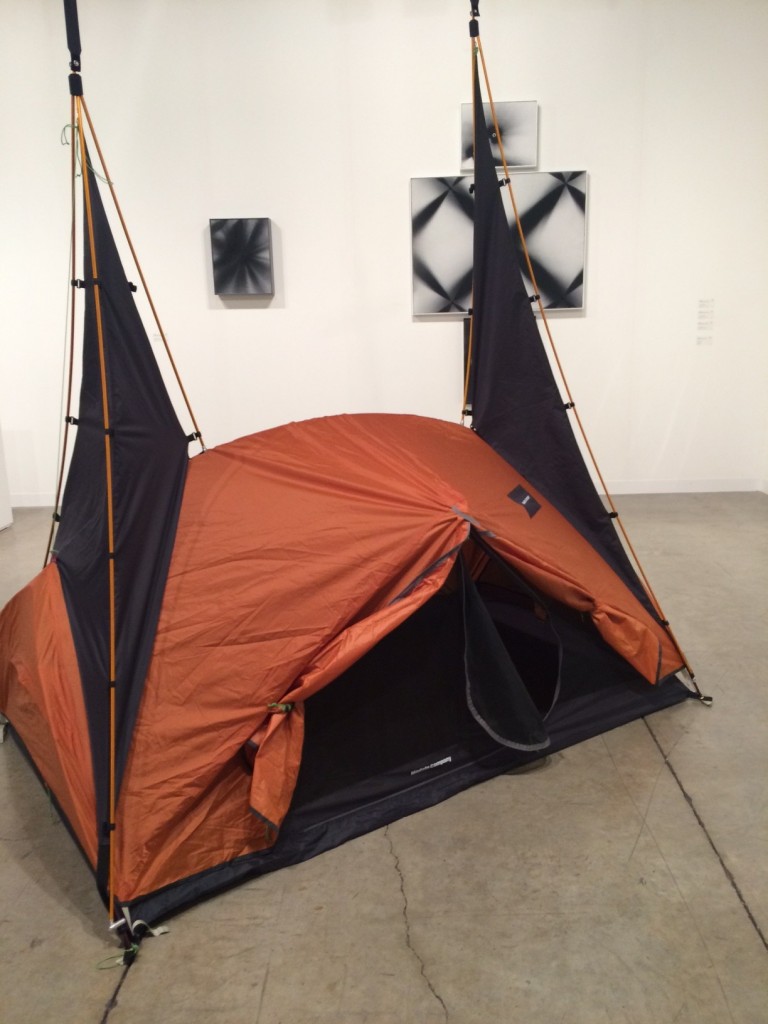