Daniel Green: Days of Our Lives 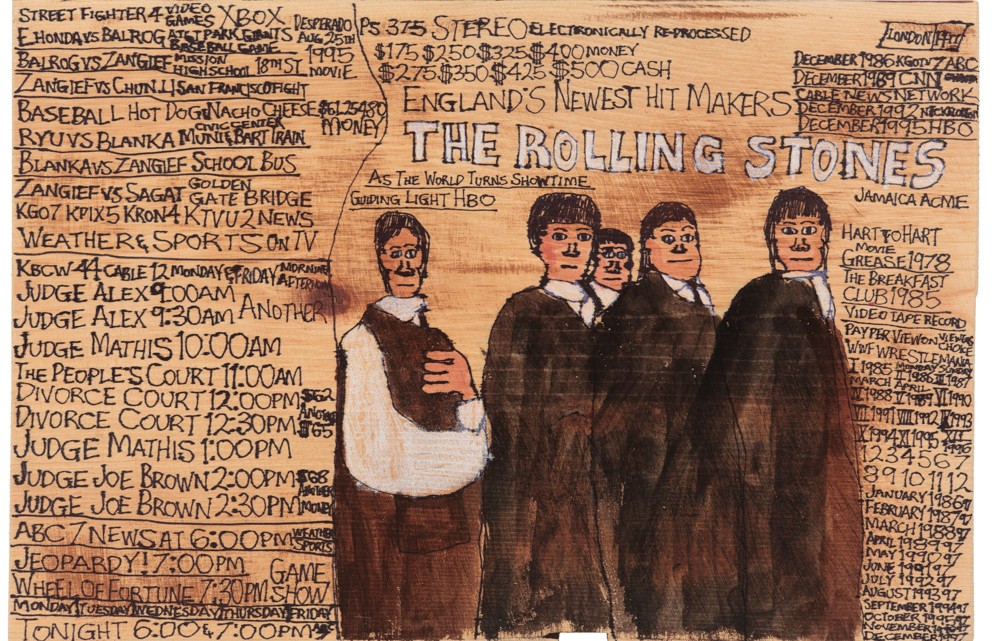 Daniel Green, “She is Naked. 2009. Mixed media on wood,11.5 x 16 inches. Courtesy of the artist and Creativity Explored.

Daniel Green’s idiosyncratic art combines his fantasy life around pop culture with the reality of his identity, family, friends, and teachers at Creativity Explored. A large, gentle young man of Samoan and African-American heritage, Daniel Green grew up in San Francisco where he attended Mission High School and his prodigious talent came to the notice of his special education teacher. Often humming while creating his layered, rhythmic compositions, his art flows out in a perfect expression of what he wants to say, the images and words fitting together like puzzle pieces. His writing often notes 1985, his birth year, and appears among numerous references to TV shows, video games, movie stars, and cultural icons; the exhibition’s title refers to one of his favorite shows, the long-running soap opera Days of our Lives. Drawn on wood panels, his words nestle up against images of Johnny Depp, Jim Carrey, Dr. Spock, Madonna, Josephine Baker, Martin Luther King, Malcom X, his Samoan ancestors, the late pro wrestler “Mr. Perfect” Curt Henning, Batman, The Beatles, The Rolling Stones, Little Richard, and images from ArtForum. Created over the last four years, his pieces operate like psychic maps or free association self-portraits marking the passing of time and the days of his life.

The fresh, poetic, stream-of-consciousness combinations of words and images found in children’s artwork, psychiatric patients, self-taught artists, and artists with disabilities have long fascinated contemporary audiences. The purity and power of “outsider art” has been the subject of studies by linguists and scientists, and it has inspired and influenced painters such as Paul Klee, Jean Dubuffet, Jean-Michel Basquiat, and poet and painter Kenneth Patchen. Lately, this romance has captured the imaginations of influential curators like Larry Rinder (Berkeley Art Museum, Pacific Film Archive) and Matthew Higgs (White Columns); even the 2013 Venice Biennale recognized the energy and originality of outsider artists. Several artists at Creativity Explored have mainstream gallery representation. Create (2011) at the Berkeley Art Museum showcased artists from Creativity Explored as well as artists from NIAD and Creative Growth—art centers for artists with disabilities located in the Bay Area. 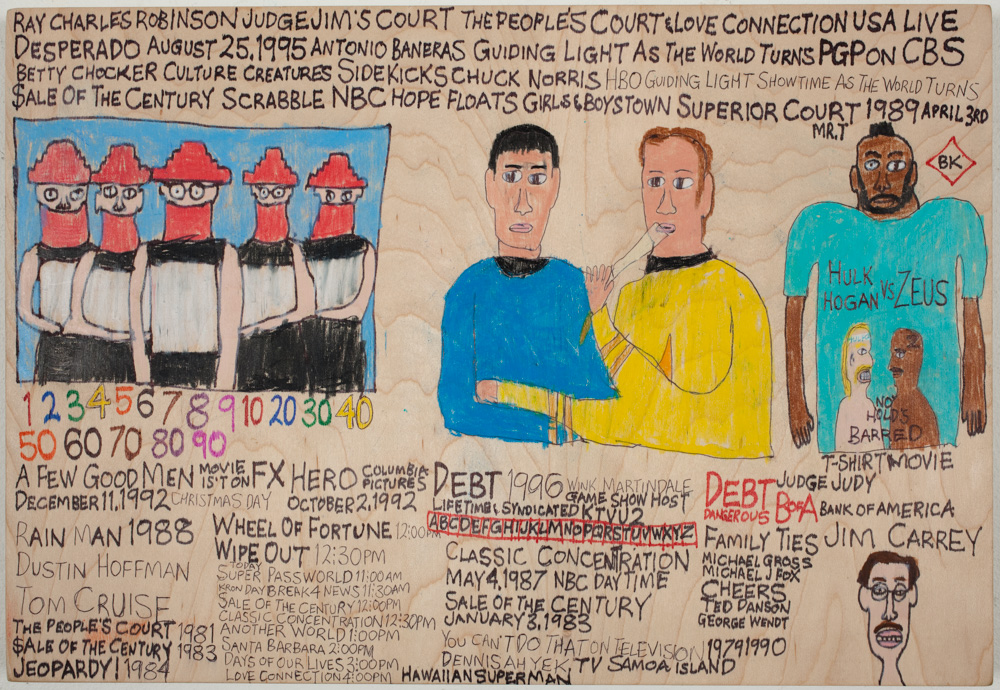 For example, Judith Scott, who died in 2005, worked at Creative Growth Art Center in Oakland, California, and last year her work received a solo show, Bound and Unbound, at the Brooklyn Art Museum. New York Times critic Holland Cotter writes, “ . . . the question remains of where, in the concept of outsider art, the stress should fall: on outsider or on art?”1 In the show’s catalogue, Catherine Morris, the BAM curator, places Scott’s work in the larger context of formally related contemporary art, and in an interview with the artist’s twin sister, Joyce, poet Kevin Killian focuses almost entirely on biography in an attempt to understand Judith Scott’s art though that lens. Judith Scott’s extraordinary work operates as both contemporary art and as a chronicle of her life as a woman born deaf with Down syndrome, who lived in a state mental institution in Ohio for almost 30 years. 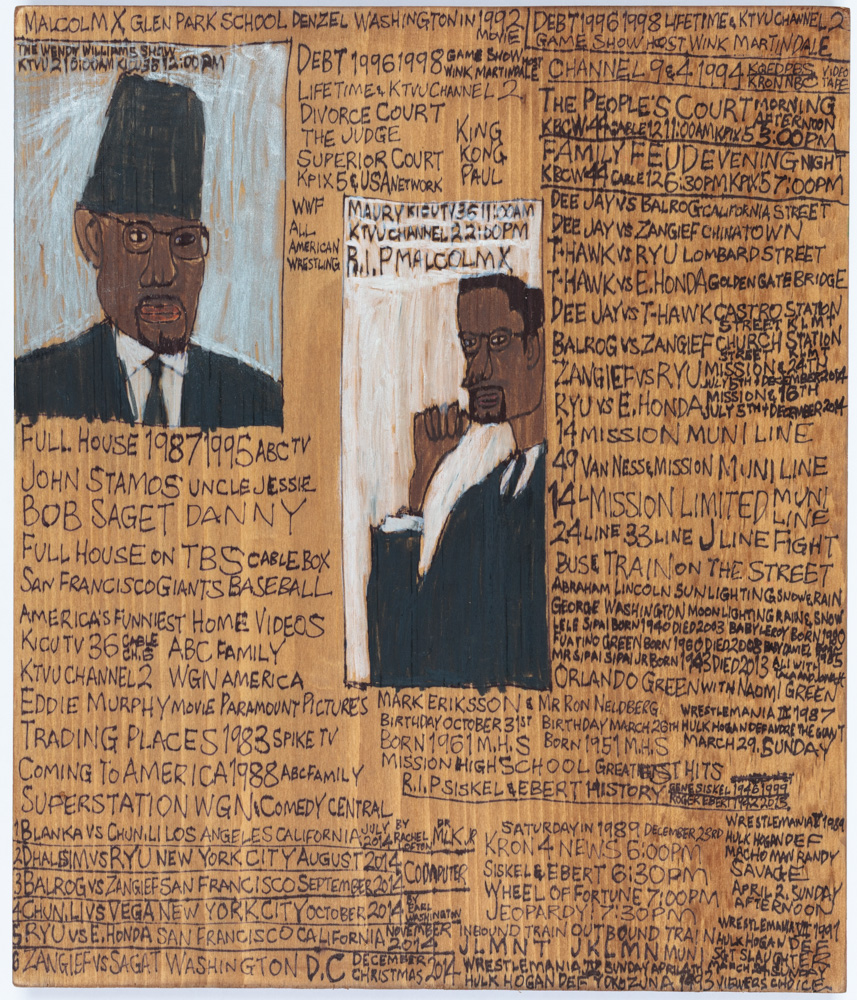 Creativity Explored is housed in a turn of the century dance hall located a few blocks from Mission High School, named after nearby Mission Dolores that was built by Spanish missionaries in 1776. Creativity Explored was one of the three art centers, including NIAD (National Institute for Art and Disabilities) and Creative Growth, founded by the late Florence Ludins-Katz and her husband, Elias, for artists with disabilities in the 1970s. It is open daily to the public.

A beehive of activity, Creativity Explored‘s crowded art studio is located directly behind the front gallery. Daniel Green’s Days of Our Lives was made possible by the committed efforts of teaching artists Gilles Combet, Judith Larosa, Leeza Doreian, Eric Larson, and Paul Moshammer. The studio’s dedicated teachers, volunteers, student interns, and artists form a unique artistic community reflecting the cultural diversity and beauty of San Francisco. It is the city at its best. 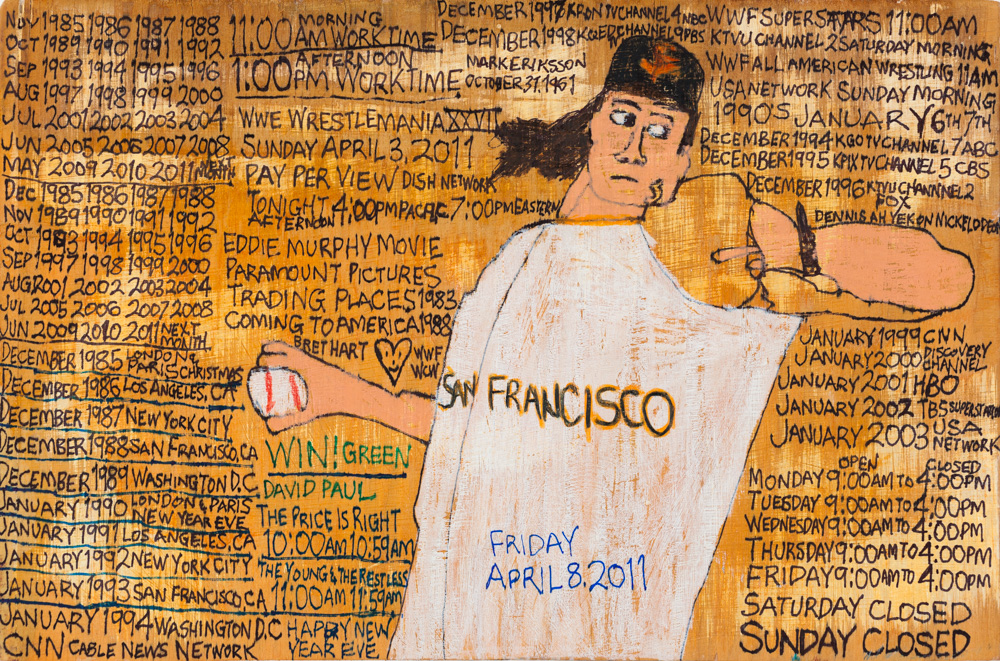 Beyond Reason: Art and Psychosis. Works from the Prinzhorn Collection. University of California Press. 1996