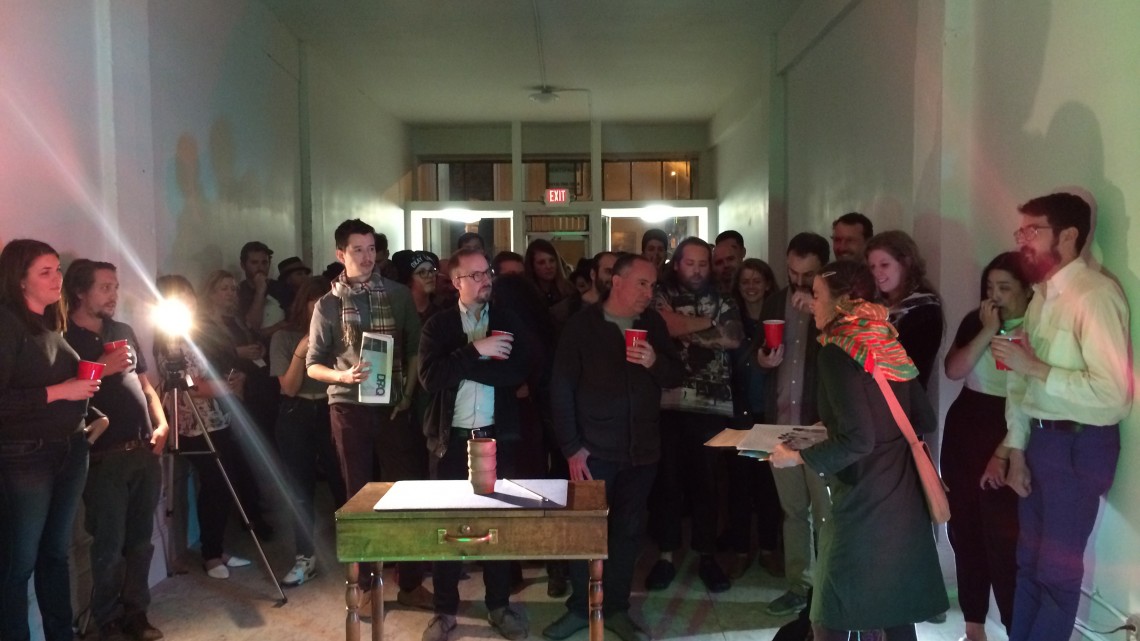 SFAQ is pleased to announce the grand opening of SFAQ [Project] Space, a social sculpture and miniature institution that will be open to the public for four months of arts and culture programming at 449 O’Farrell Street. The grand opening of the SFAQ [Project] Space will begin with Comforter, curated by Petra Collins, which will also be the launch of the project’s expansive and ambitious vision to bring free and thoughtful arts programming to the Tenderloin, an underserved San Francisco neighborhood. The grand opening will be held on Friday, March 13, 2015 from 6 – 9 pm, with food by Dennis Leary. Free to attend.

Located at 449 O’Farrell street in a 1,200 square foot Tenderloin storefront recently converted from a massage parlor into a multi-platform exhibition space with generous funding from the Kenneth Rainin Foundation, and under the direction of SFAQ’s Publisher and Editor in Chief Andrew McClintock, SFAQ [Project] Space will be a multidisciplinary temporal institution that provides a place for its patrons to encounter, discuss, and think about artifacts of contemporary art and culture organized in exhibits and events on film, food, performance arts, visual arts, lectures, and discussions.

SFAQ [Project] Space is open on scheduled Tuesday and Thursday evenings from 6 – 9 pm and on Friday and Saturday from 11 am – 5:30 pm. Entry is free for everyone.

From Collins:
Winter really gets me sad and depressed—it’s so cold and dark and most of my time is spent inside—so all I’ve been thinking about is the space I inhabit and its impermanence. When will I move, what stuff will I take with me, how can I make myself comfortable where I am? Living in New York trains you to treat everything as transient, especially where you live. I grew up in a suburb and then moved to the city and in both spaces I have had this despondent feeling that out of the tranquil sanctuary called home would come chaos; that at any minute things could just change—and things did change and will continue to do so.

At the Tenderloin Institute of Art, students will learn to develop a body of work, formulate it conceptually, and apply critical reasoning. Students will exhibit their resulting work and walk away with an MFA. The school will consist of six stations, each devoted to a particular area of interest: technical skills, conceptual skills, history, and theory. Each station will have a task to complete and information on how to complete that task. Students will have exposure to art historical information, conceptual vocabulary, documentation of their work, and exhibition practices. After students complete the stations they will step up to a podium to present their thesis and defend their work. The work will then be on display and students will receive their own official MFA certificate.

Target Video (aka TargetVideo77) is a San Francisco-based studio, founded by artist Joe Rees, who, collaborating with Jackie Sharp, Jill Hoffman, Sam Edwards, and others, archived early art performances and punk and hardcore bands on video and film. Performers and artists as diverse as the Sex Pistols, Dead Kennedys, The Screamers, The Cramps, William S. Burroughs, The Clash, Avengers, Mark Pauline, Survival Research Labs, The Go-Go’s, John Cooper Clarke, Bauhaus, X, The Dils, Johanna Went, Talking Heads, Black Flag, Flipper, and Crucifix were recorded in the late 1970s to the early 1980s. Using multiple cameras, they produced some of the highest quality footage available of these bands performing in front of live audiences. In addition, videos often included interviews with members of the bands.

Experience these videos through a happenings-type atmosphere as an installation on March 19, or during the course of the SFAQ [Project] Space on the video jukebox in the video café.

League of F.A.M.E. Season Two [April 23 – May 23]
The competition is back with League of F.A.M.E season two! This installment of L.O.F. is sure to take Fantasy Art Market Enthusiasm to the next level. League of F.A.M.E. (Fantasy Art Market Enthusiasts) is a fantasy competition in which participants select imaginary teams of visual artists, living or dead, and score points according to the performance of their players. Season two of League of F.A.M.E. will be documented and broadcast on the San Francisco art radio podcast KUNSTCAPADES and on the KUNSTCAPADES Tumblr page. This season will begin with a live draft event on Thursday, April 23 at SFAQ [Project] Space with players selecting their stable of artists. Each week a scoring category will be blindly chosen and announced via email and on KUNSTCAPADES, and participants will enter their week’s lineup of artists into the game accordingly. On Saturday, May 23 at SFAQ [Project] Space, the season will culminate with an awards ceremony where top-scoring participants will receive recognition for their achievements.

94110 Screen Tests [May 16 + 17]
New TV drama 94110 is looking to cast six leads, supporting roles, and background extras for its pilot episode. The production will be accepting union + non-union submissions. No experience necessary. Each role will be cast with no preference toward age, race, ¬or gender.
94110 imagines the story of six leading technology executives living, learning, and loving together in San Francisco’s Mission District, 94110. Production is scheduled on location in San Francisco for summer 2015.

Alternative Space [March 17]
The discussions are kicked off with a talk about the history of artists’ relationships to alternative spaces and magazines beginning in the 1960s. Gwen Allen, Andrew McClintock, Constance Lewallan, and Renny Pritikin will open up the program by giving context to SFAQ [Project] Space by looking at the history of alternative methods of artist-generated exposure.

Style Wars [April 7, May 12, June 2]
Yves Saint-Laurent famously quipped that “fashion fades, style is eternal.” This enigmatic statement alerts us to the relationship that exists between notions of style and notions of history. Or, to the idea that “to have style” is to have the means of inserting oneself into history, while “to lack style” is to risk oblivion. Bearing in mind Saint-Laurent’s words, this series of conversations traces style’s fluctuating features and movements across varied social, political, aesthetic, and philosophical terrains as serious work. Three styles will be discussed on different nights: American Gothic, Dissident Dandy, and California Cool. Nicole Archer, Assistant Professor of the History and Theory of Contemporary Art at SFAI, is the principal organizer of “Style Wars.”

The Networked World [March 24, April 21, May 19, June 9]
Ben Valentine, art critic and culture commentator, will organize a series of 4 panels on the complexities of networked creativity in today’s unique technological environment. Discussions include: “The Archive” [March 24] with Alexis Rossi, Natalie Cadranel, and Keir Winesmith; “Is it Global?” [April 21] with Dorothy Santos, Emily Holmes, and Quinn Norton; “We the Users” [May 19] with Tim Hwang, Angela Washko, and Cullen Hoback; and “Weird Future” [June 9] with Sterling Crispin, Adam Rothstein, and Morehshin Allahyari.

The New Geography of the Contemporary Art Market [April 14]
The market for contemporary art today is global, but has it changed the dynamic of the center and the periphery? While it might seem that the dominant players from established art centers are pulling the strings, there is new evidence that the preeminence of the U.S. and Europe is beginning to wane, and multiple markets have emerged in place of one central art economy. This talk will address innovations to the art market from the periphery and how these are beginning to reshape the geography of the art world in the 21st century. John Zarobell, Assistant Professor of International Studies and Program Chair of European Studies, leads the discussion.

Fast Forward: Video Art Conservation from the Studio to Institutions [April 28]
“Fast Forward” is moderated by Chris Sollars, with Doug Hall and additional panelists to be announced. “Fast Forward” addresses methods of conservation, storage, advanced or future formats in conversation with video artists, collectors, and institutions with past problems of backing up, upgrading, and current archive processes. How to extend the life span of a video format/file? How are these videos preserved for the future? How do institutions and artist both deal with this problem and think into the future?

Video Café [Every Other Thursday Evening]
On view every other Thursday evening, Tony Labat will curate a series of screenings surveying both historical as well as contemporary local, national, and international Video Art. Selections of videos will be displayed from artists, Electronic Arts Intermix (New York), as well as the Kadist (San Francisco) video collection. Themes will examine artists using video as a personal/political tool, the cinematic in video production, the sculptural, language, narrative, and non-narrative. The first Video Café installation will be Stand Up by Joe Rees of Target Video.

Guernica [Ongoing]
Guernica is an espresso bar that also hosts a food program curated by San Francisco chef and restaurateur Dennis Leary, which activates on exhibition openings and special events and during daytime hours on Fridays and Saturdays.

The Store [Ongoing]
Curated by Leigh Cooper with the SFAQ team, the store hopes to bring recognition and support to some of SFAQ’s favorite artists, designers, and creators. Featuring revolving inventory throughout the months, highlights include limited edition items from Colpa Press, zines and objects from an array of contributors including Barry McGee, Bill Daniels and Jocko Weyland (Elk), The Good Company, jewelry, clothing, and art objects.

Also on display are artist projects included in the printed magazine and zines from past issues, 2012 – 2015.

Visit projects.sfaq.us to view the full calendar, live on March 9, 2015.