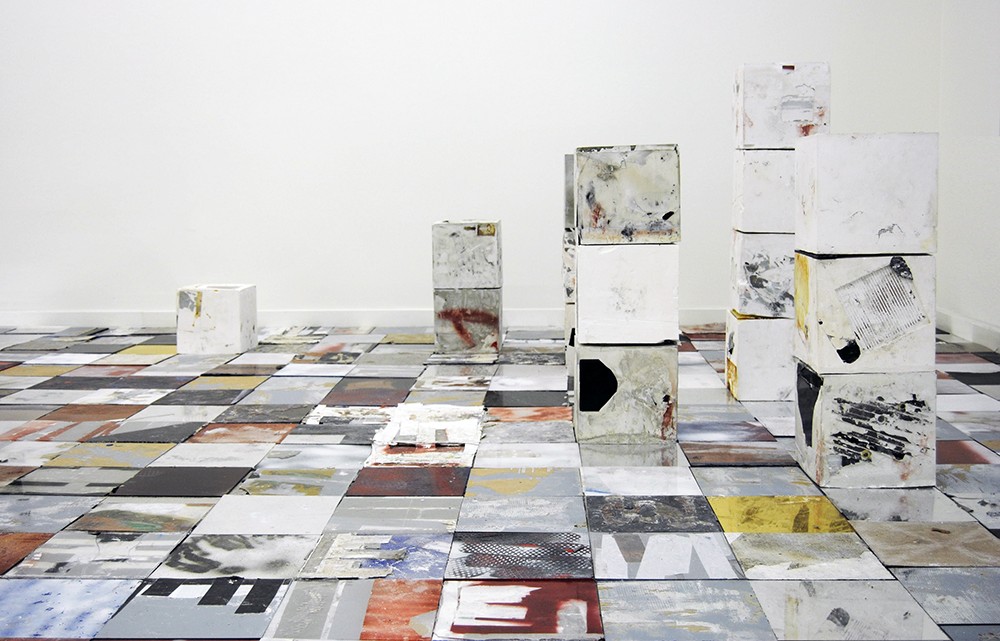 Just talkin’ to myself

This is the Pinocchio theory, you know baba, 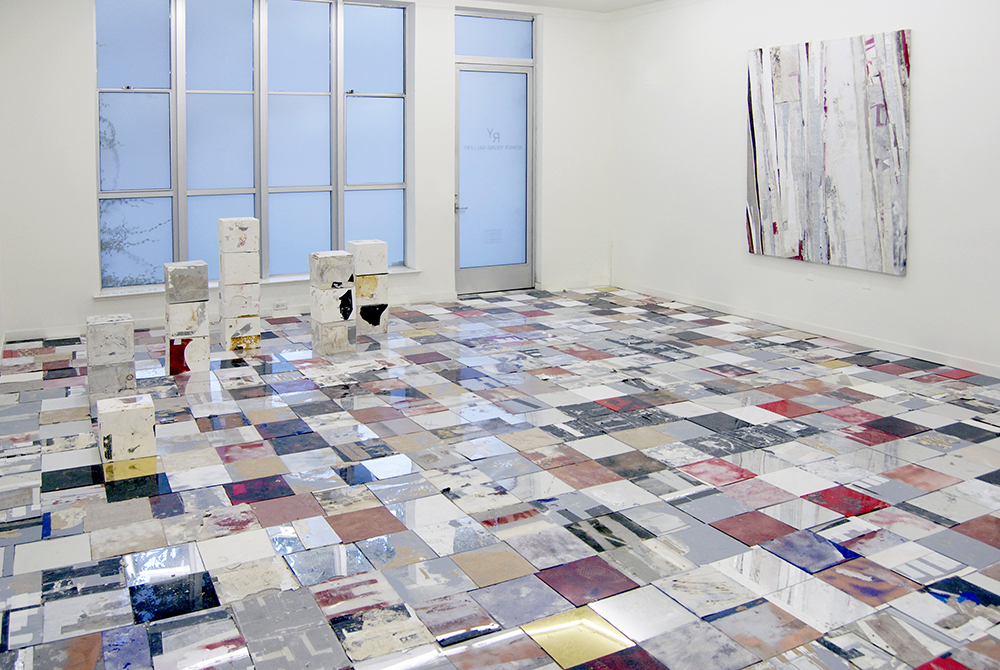 LD50, Ryan Wallace’s solo exhibition of abstract work at Romer Young Gallery, struck me as sophisticated, beautiful, and decorator-friendly. The exhibit, whose title is a term from toxicology meaning “median lethal dose,” features a site-specific installation of mirrored floor squares and plaster blocks embedded with studio debris, and large collaged wall pieces. His magpie approach uses wax, plaster, concrete, tape, glue, cut up tarps, vinyl, powdered metal, and after-images from printing processes to create his mixed media works. In an interview in Hunted Projects, Wallace, a well-informed, thoughtful New York artist and gallery owner who studied graphic design at Rhode Island School of Design, cites a plethora of influences: Action painting, the Beats, jazz, Pierre Chardin’s theory of the Omega Point, Raymond Kurzweil’s notion of technological singularity, and super colliders. For me, the energetic, intentional, and well-composed pieces in LD50 do not hold a lot of surprises. 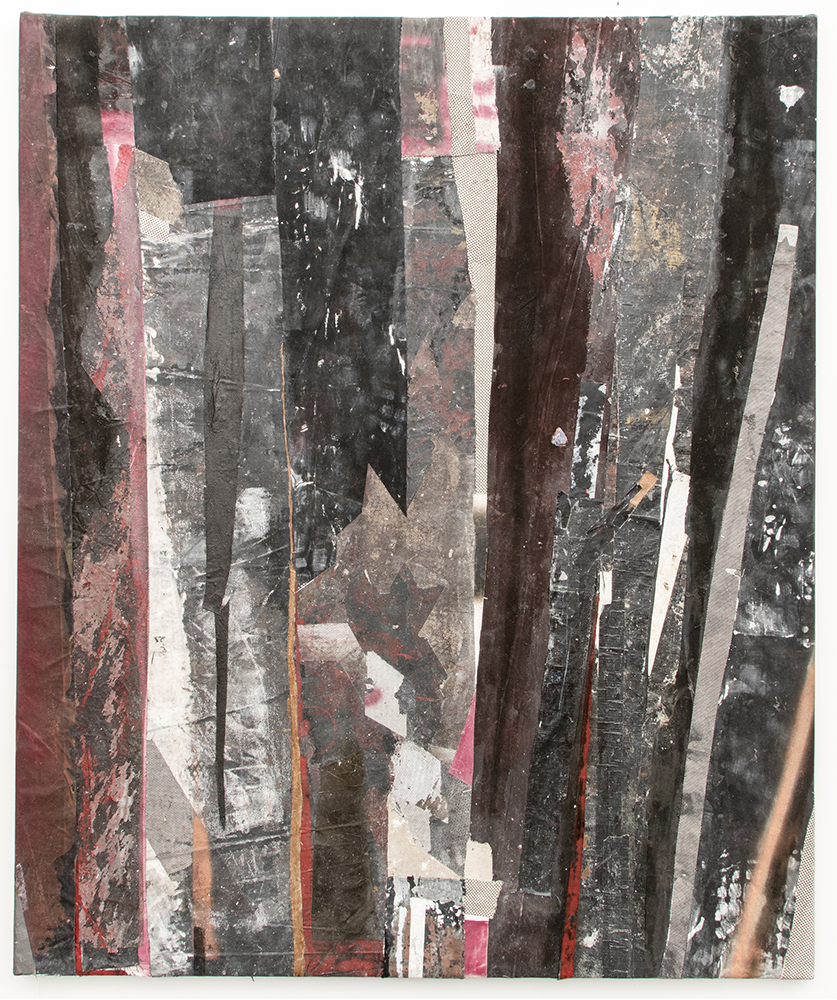 His work calls to mind Who’s Afraid of the New Abstraction?, a conversation in SFAQ last year between Jarrett Earnest and scholar-critic Alex Bacon. They both infer that a lot of the new abstraction is about the materiality and deconstruction of the performative act of making a painting or sculpture, where the process is often the content. Which makes me ask: Should the new abstraction be taken strictly on formal terms à la Clement Greenberg, part of an historical imperative, produced in good faith, by the efforts of talented artists? For Bacon, art at its best should be a pure thing, separate from the market.

Jarrett Earnest comments, “The emphasis on ‘process’ as a unifying device across these works is part of what makes the visual content inseparable from the larger economic demands that create them­—they are about a certain type of production and consumption.” Further in the conversation he says, “ . . . there is [no] formal or intellectual reality of the paintings that are outside of the market forces they are participating in, but seem embedded in the very formal decisions of the work.” For Earnest, art is not a pure thing, separate from the market. (He turns the design cliché “form follows function” into form equals function. Emphasis mine.) 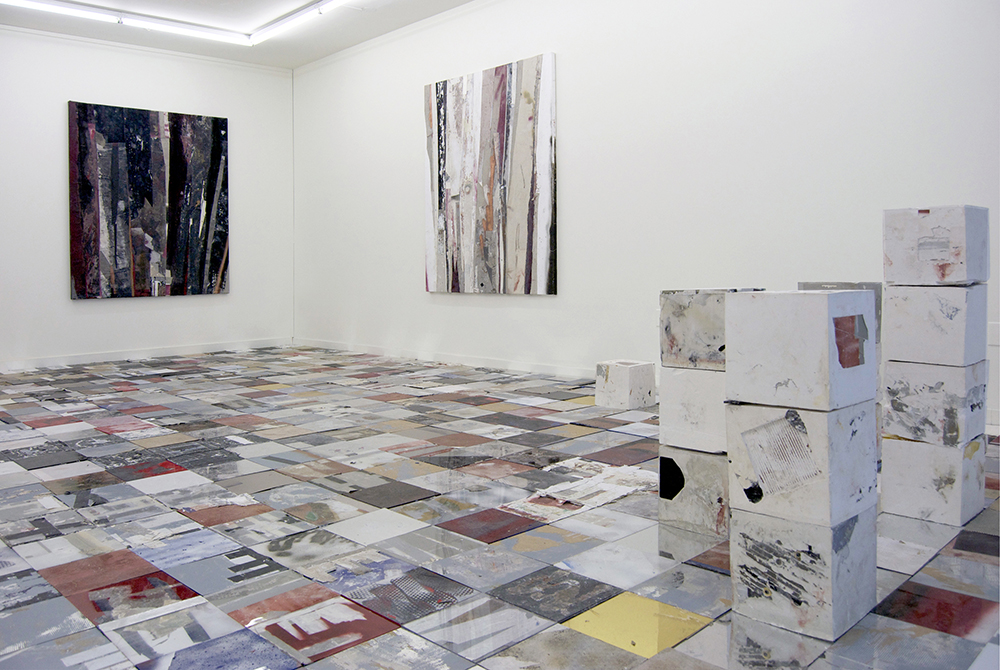 Thus, we arrive at the opinions of Jerry Saltz, Roberta Smith, and Walter Robinson, critics who have coined some inventive and unflattering names for this trend of new abstraction: “crapstraction,” “drop cloth art,” “Zombie Formalism.” What I think they are saying is that Clement Greenberg is still old hat and market capitalism is a pitiless task mistress. Does the market for the new abstraction reflect these cynical art market forces, where power is concentrated in the hands of a small cabal of collectors that want accessible bespoke abstraction they can share with like-minded friends? Does the current art market co-opt and cannibalize and then regurgitate art in a more digestible form? Does the new abstraction viewed over the Internet create the buzz and power of this dystopian art market? Is process and materials-based work some kind of homeopathic remedy for this? Or, is it an expression of what Alex Bacon calls “our weird hybrid perception that exists today, whereby images take on the weight of objects, and vice-versa”?

Finally, do you have to go outside the art market these days to create significant art? The artists, gallery owners, non-profit spaces, and dealers who spin delicate spider webs of meaning outside these market forces­ are tasked with a difficult balancing act. Such creation ain’t easy, and it’s liable to be hijacked. Romer Young Gallery, located in the city’s once-gritty industrial neighborhood known as Dogpatch, sits right in the shadow of yet another new luxury condo development. I could easily imagine Ryan Wallace’s handsome works gracing the lobby.