Down the Chute in Chinatown 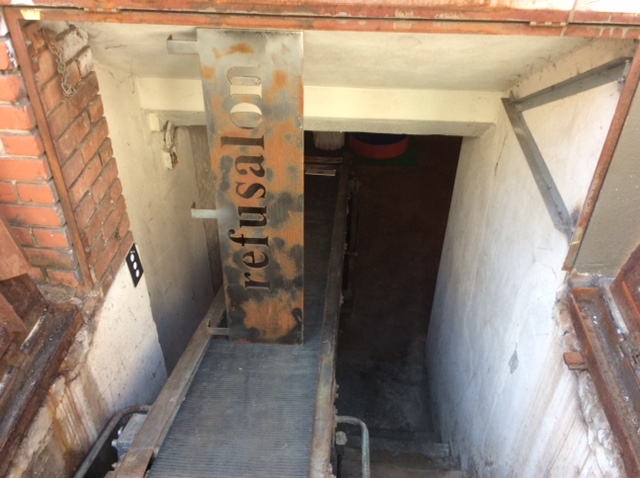 View down the chute to Refusalon Gallery. Photo by John Held Jr. 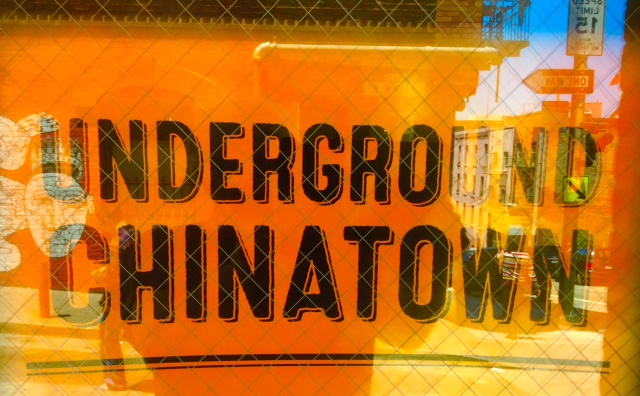 Duchamp foretold that the artist of the future would go underground. Now the gallery system is going the same route. Whether it is surreptitiously nestled within the bowels of the beast, or squirreled away in the next undiscovered art hotspot, it makes perfect sense to be happening here in San Francisco, where the art scene is engulfed in a swirling vortex of money, technology, and soaring real estate, stirred by recent graduates of curatorial and social practice.

When I first came to San Francisco twenty years ago, Refusalon gallery was the hottest thing going. Curated by Charles Linder with mostly-silent partner, Israeli-born and educated Shmulik Krampf, it was first embedded down one of the mean streets of South of Market. Then it suddenly switched locations and rose to prominence in the Crown Point Press building on Hawthorne Lane. Suddenly it became a San Francisco darling, advancing the careers of Sandro Chia, Dale Chihuly, Gay Outlaw, Guy Overfelt, Uri Tzaig, Sam Yates, Pip Culbert, Roman Signer, Janine Gordon, Herman de Vries, Ori Gersht and others. 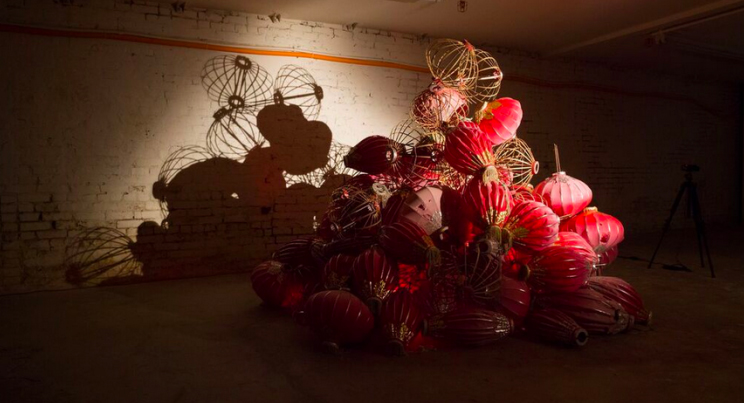 It is the silent partner whom I bumped into recently. After relocating from the Crown Point Press building to Dogpatch, Shmulik is still endeavoring to expand the art market in San Francisco. He is employing an interesting mix of strategies suited to the technocrats that have flocked to the area with recently acquired disposable income. Both of his approaches reflect upon the current condition of the arts in San Francisco. 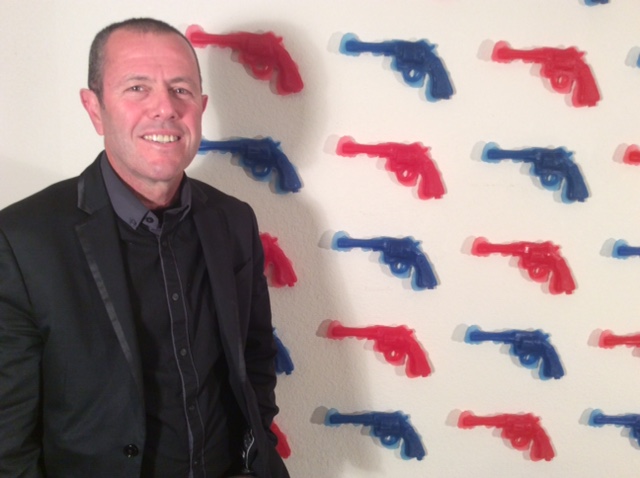 Shmulik’s aboveground venture is his association with the Marriott Hotel on Post Street. It’s your standard upscale downtown San Francisco hotel with a doorman and valet parking. There’s a small but elegant lobby with the main function of rapidly whisking you by fancy elevator to lodging on your requisite floor. Everyone has to pass through the lobby, and that’s where Shmulik has installed a multitude of artworks by various artists.

He has both walls and vitrines to work with and there are interesting works by Linder, Tom Marioni and, well, Dale Chihuly, if you swing that way, but that’s where the whole thing begins to border on cheesy. That’s the deal you make with the devil to show at a Marriott chain. Sometimes it comes up to bite you when the management puts the kibosh on a controversial water fountain spurting water from the nipples of a female nude. Mostly it’s a good opportunity to show some interesting art to well-heeled folks who wouldn’t normally wander into an art gallery. 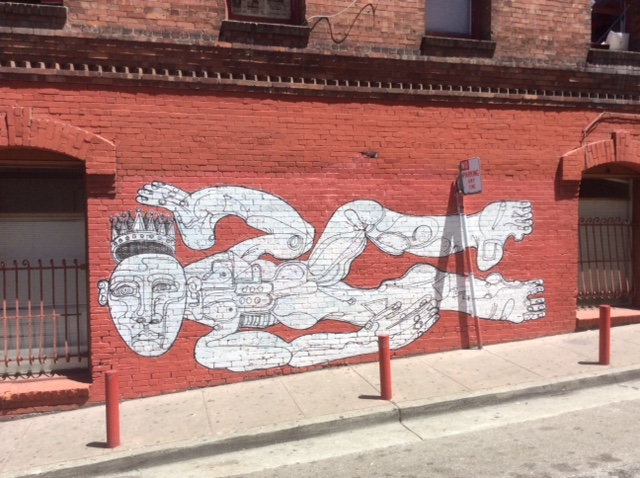 It’s this other strategy employed by Shmulik Krampf that I’m drawn to. It’s almost become the duty of the art world to sniff out the next real estate opportunity. They are able to do so, because they are willing to inhabit the least desirable of locales, due to a high degree of tolerance, adjustment to periodic crime, untidy living conditions and lack of art-enthusiastic street traffic. Few have ventured into Chinatown in recent memory, but Shmulik and others have arrived, and I say get ready for the ensuing onslaught.

From South of Market to Dogpatch to Chinatown, it’s like the changing of the guard. One neighborhood becomes fashionable, the price goes up and the artists venture forth to the next least desirable but affordable studio/gallery/storefront/live/work location. The new Refusalon, a mixture of storage unit, office, gallery, performance venue and video screening room, is situated right around the corner from the legendary R & G Lounge on Kearny and Commercial Street. Shmulik thinks it used to be the restaurants’ wine cellar, and one descends the sidewalk grate in front of a nondescript building, much as a case of wine is shuttled down a chute, which indeed is still functioning, and to which Shmulik has festooned the original Refusalon steel sign. Inside are two long low-ceiling rooms: one which functions as a gallery slash storage space with splashes of office and library, and another large space functioning as a installation/video projection room, currently occupied by an assemblage of Chinese lanterns by Justin Hoover, with the potential as a venue for future lectures and events. On June 12th, Refusalon staged, Chinatown Night Out, featuring the work on Linder, Hoover, Chris Isner, Ella Tideman, Jack Leamy, Yoram Wolberger and Camilla West. This follows a 25-year gallery tradition of limited showings, according to Refusalon, “creating an I-was-there exclusivity, an ‘in-crowd’ prestige that generated buzz.”

How did all this happen? By way of Craigslist while searching for storage space. It’s like one of those urban myths you hear about that make you sick to your stomach, because it didn’t happen to you. But that’s life. No. That’s life in present-day San Francisco, where it takes a miracle to survive in a city steeped in cultural capital, yet short on reasons to encourage your creative self to stay. 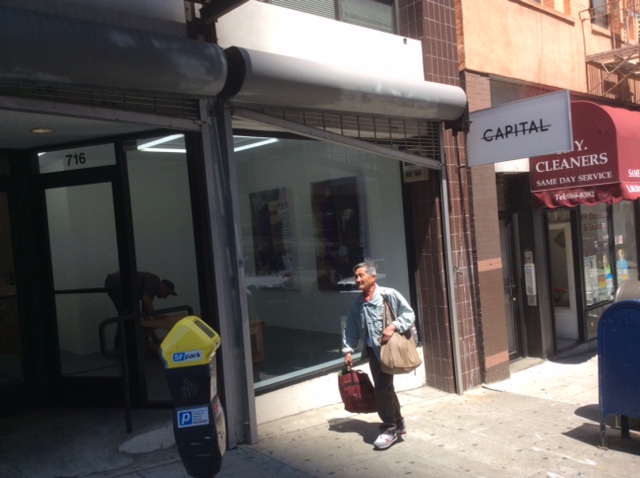 Shmulik isn’t the only one that’s made the leap to Chinatown. He’s on tiny Commercial Street. On the other side of the building, fronting on Sacramento Street, is Capital, a gallery run by Jonathan Runcio, who studied painting at CCA, and Bob Linder, formerly of Queen’s Nails in the Mission. The miniscule space, which opened in January 2015, has been exquisitely refashioned from the previous annex of a neighboring tailor shop. It too was found on Craigslist, while looking for a suitable garage in Potrero Hill, Dogpatch, the Mission and Glen Park before finding their present space. One of their first exhibitions showed the work of Brendan Fowler, which, in keeping with the tailor shop theme, incorporated industrial embroidery in the finished artwork. From June 12 through July 18, the gallery showed the work of Jason Kalogiros, The Measure, The Weight, The Ground, The Scale, a series of grid works that, according to the exhibition press release, “began with his fascination with looking at photographic representations of abstract painting- which are themselves images on woven or gridded fabric.” Their latest show, running through August, features Stephen Lichty. 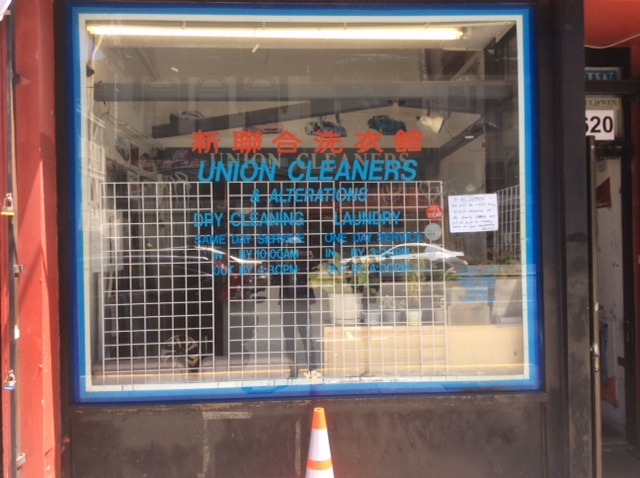 Another literally “underground” gallery in Chinatown is situated beneath a dry cleaner, whose workers will politely guide you past the machinery and down a narrow staircase. Aaron Harbour, Jackie Im, and Facundo Argañaraz, found Et al. at 620 Kearny, nearly opposite the R & G Lounge, simply by spying a “for rent” sign. Harbour studied in the New Genres department at the San Francisco Art Institute. Im has a BA in Art History from Mills and a MA in Curatorial Practice from CCA. Argañaraz is a practicing artist hailing from Argentina. They have not limited themselves to the space, but have participated in art fairs in Mexico City, Los Angles, Dallas, New York, and Miami. Their present exhibition is curated by Jackie Im, and features the work of Esra Canogullari, Simon Dybbroe Møller, Puppies Puppies, Sydney Shen and Nicholas Andre Sung. It continues through August 15.

Ladybug House at 1321 Powell, between Broadway and Pacific, opened their doors on Valentines Day, 2015. They are both a gallery and a bookstore. Their scheduled hours are 1-7pm, Thursday through Sunday. Their recent exhibition, “Vintage Clothing,” by Chloé Maratta, is followed by an exhibition by Maggie Lee from August 7 through August 28. They recently collaborated with SFAQ Projects on a two-evening program of performance and readings. 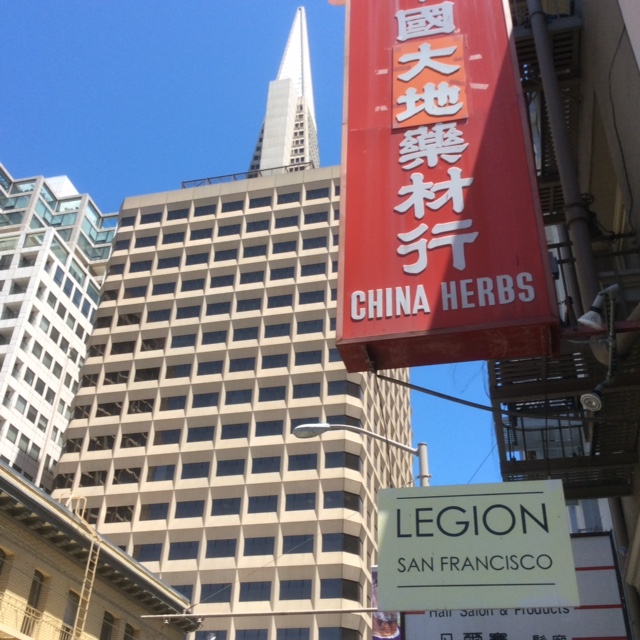 Legion Gallery in the shadow of the Transamerica building. Photo by John Held Jr.

Legion, at 679 Clay Street, is right around the corner from Et al., in the shadow of the Transamerica building and situated upstairs from a “contemporary lifestyle boutique,” which sources a number of independent designers. Founded by fashion writer Sydney Pfaff, the upstairs gallery is curated by Alice Wu. It’s a well-apportioned space that shows the work on display to good advantage.   The latest exhibition features Jessalyn Aaland, whose brightly-colored collages are made from paper, vinyl, and metallic foils.

With the new Chinatown BART station scheduled to open in 2019, there are unseen changes in store for the ethnic enclave. As expected, not all are pleased. “It is premature to call a trend, and probably fear-mongering to mention gentrification. But while I like these two galleries in Chinatown [Capital & Et al.], I wouldn’t necessarily want to see many more.” So writes Christine Wong Yap on her blog earlier this year. “This is not a criticism of the galleries or the people that run them…I am sure that finding affordable space and running a gallery in SF is extremely challenging now, and those efforts are to be commended. If anyone can situate a gallery sensitively within a neighborhood, I hope they—and anyone following in their footsteps—can.”

There is much to see and do in Chinatown. It has a history dear and deep in the soul of those who reside in the neighborhood, and is visited by millions who cherish and are enriched by its cultural heritage. The emerging Chinatown gallery scene is by no means in danger of overrunning the established business and residential community. It does, however, indicate that new options are being explored by adventuresome gallerists, pushed to the limit in finding affordable opportunities in a fast changing urban environment.

Work by Jessalyn Aaland at Legion. 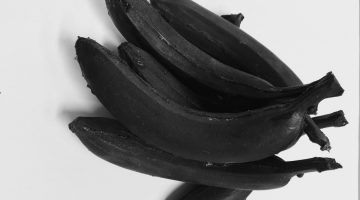