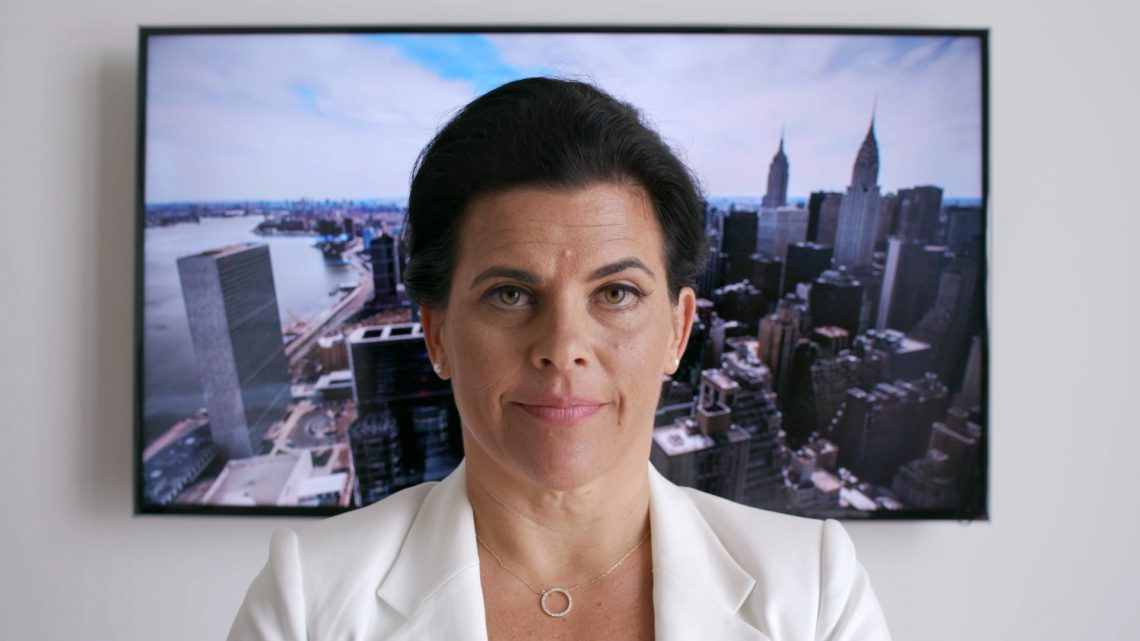 Apartment 56A, a 1,477 square foot two-bedroom residence at 721 Fifth Avenue, recently sold for $4,000,000.[1] The views from its floor-to-ceiling windows are panoramic; interested buyers may find floor plans and related images on the Douglas Elliman website or receive a personal tour in Jennifer and Kevin McCoy’s Broker (2016). The single-channel video might have been read as pure satire had the 2016 presidential election ended differently. Yet the artists’ choice to stage their unsettling film inside one of the President-elect’s infamous[2] Trump Towers now reads as a darkly prescient. 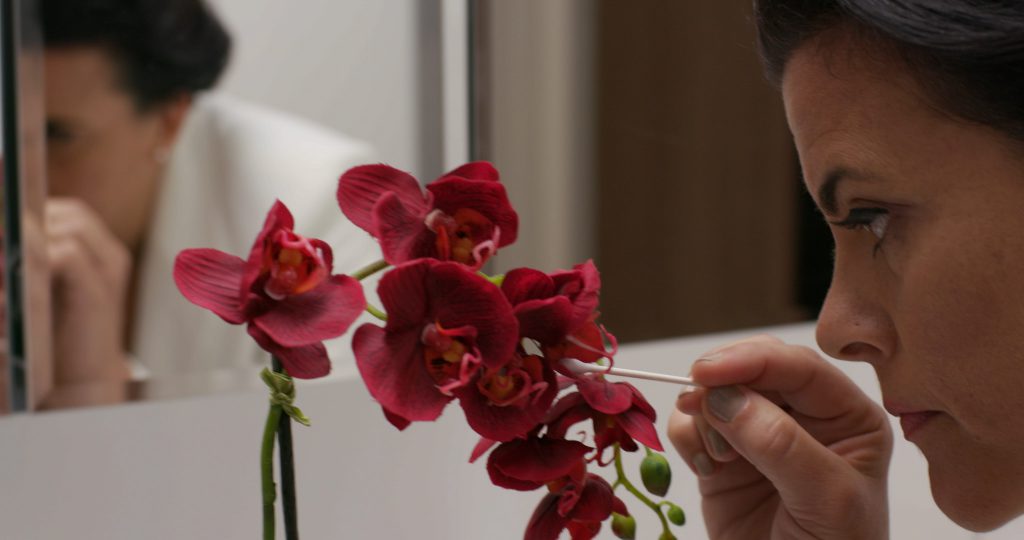 The video itself follows a white-suited woman as she prepares for and conducts a walk-through of one apartment, whose attributes she names as if reciting poetry: “custom millwork details… complete home automation… glazed herringbone parquet… a fabulous lifestyle.” A Mapplethorpe catalogue rests on a low glass coffee table, modern furniture sits elegantly in the light box living room, and the fridge is stocked with both Pellegrino sparkling and Evian still. As the broker walks, she cleans, dusts a fake red plant with a Q-tip, and cleans the corners of the bathroom mirror while fixing her makeup. The obsessions with precision, cleanliness, and architecture seem to reference Amie Siegel’s Fetish (2016), which followed several workers as they immaculately maintained the Freud Museum. But unlike Siegel, the McCoys explicitly address the viewer and collapse the rigidity of the filmic structure, relating to the home-edited style of YouTube videos.

This broker’s prospective clients are invisible—or rather, by maintaining direct eye contact with the camera throughout her monologue, the broker intimates that the viewers are her clients. The viewer is nonetheless a privileged client, in the sense of having access to both the space and the broker’s inner and outer dialogues. When she explains that, “Here, we can let go of the old idea of politics… [and] move beyond the geometry of institutional limits,” the broker refers not only to the confines of the luxury bedroom, but also to the nation, where the President-elect has notably and controversially garnered support through nontraditional means while spewing anti-institutional rhetoric. Facts and data points are mere specks on the horizon, part of the “ever-changing skyline” that provides scenic amusement from the Tower. 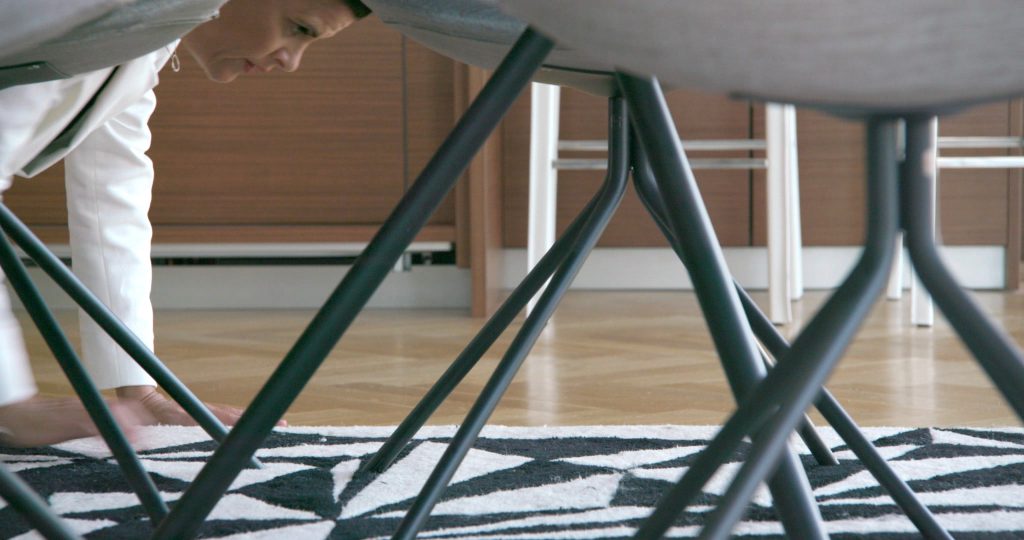 Of course, the broker is well aware that her client can hear her strategizing on how to sell the apartment. In fact, she relishes in her ability to share pointers on “the facts of luxury” and “ways to make people say yes.” Continuing in a lyrical voice, the broker shares these “proven ways:” reciprocate, provide social proof, commit to consistency, find similarity with your audience, take on authority, and suggest scarcity. Soon you will be “more successful as a marketer or politician.” The advice is perhaps familiar. As skilled as the McCoys are at capturing the eeriness of Trump’s versions of truth and superiority, though, their cited rules are jarringly mismatched with those demonstrated by the President-elect. Social proof and consistency are largely violated or faked in his speeches, while any similarities to the average American are difficult to ascertain. Even outlining specific steps towards implementing these strategies (the broker offering a choice of water to the client upon entrance as a gift in order to establish reciprocation) is not typical of the Tower’s owner.

As the tour continues, Trump’s agent begins to realize the futility of her “proven ways,” and the apartment itself turns against her. As she opens the doors to the washing machine cabinet to display its interior, she finds a dirty painting of a head. In the bathroom, another canvas smeared with blood-red paint hangs just inside the door. These and other paintings represent the infiltration of protest or culture into the once-pristine “vortex” of the apartment.

Even without the artificial interventions, one cannot help but be repulsed by the facade of elegance and progressivity in the room, which is not just the set of the film but also an actual real estate listing. Though the apartment’s supposed attributes appear advanced—its climate may be controlled from a touchscreen tablet and its sound system may detect and balance white noise and speech—its simultaneous human vacancy and material density are disturbing. Other oddities indicate that this “luxury” is incomplete. The bathroom plant is plastic, the pillows look cheaply embroidered, and the white suit jackets in the closet are wrinkled. Indeed, the sharpness of the broker’s speech soon loses its flair, first morphing into a quasi-musical in which “expensive,” “exquisite,” and “sensual” are refrains echoed by digitally manipulated voices, and then crashing into a glitch-heavy assemblage of out-of-sync speech and jerkily repeated movements (“Great,” the broker says, smiling, as she re-enters the bedroom each of a dozen times as if in a GIF). As dada automaton or puppet ruler, she soon falls apart, eventually ripping off her clothes, peeling away her fake eyelashes, and crashing to the floor. The calm tone of the successful marketer, matched by the crispness of the high definition projection, has been aggravated into a wordless disgust. 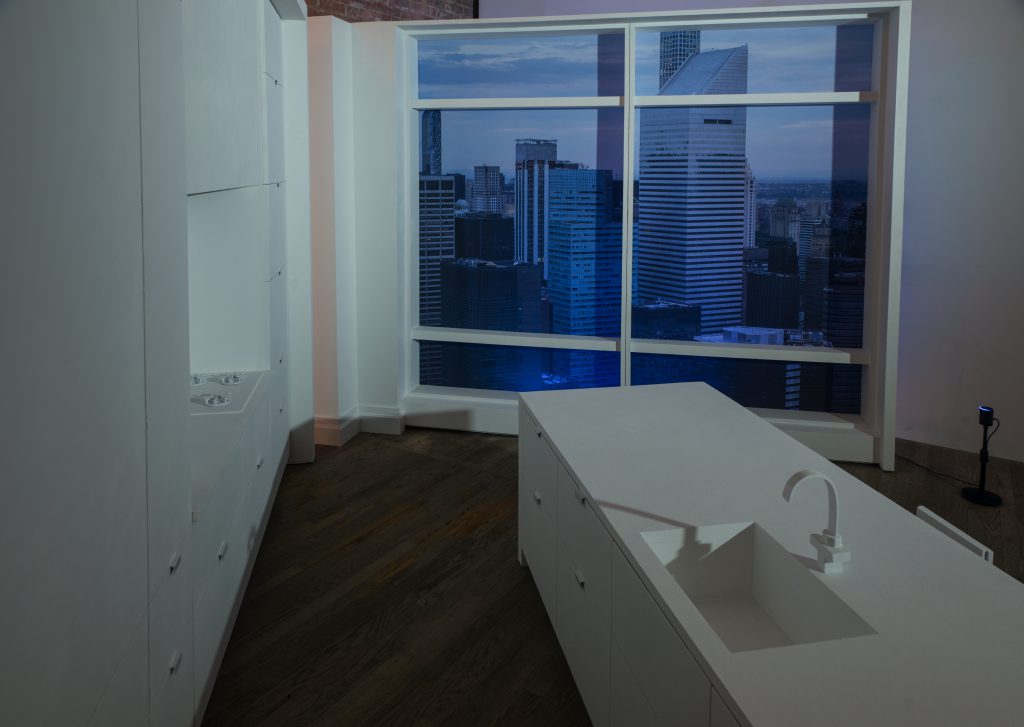 When she falls, so too does the dark comedy of the video. Its narrative, however, continues. Within the room of the exhibition is Five Sevenths (2016), a model of a kitchen in a Trump Tower apartment. Small cameras watch the viewer’s movement as she turns to explore this disjointed space. Perhaps referencing Bruce Nauman in the time delay and awkward positioning of the cameras, the installation attempts to physically locate the viewer in the architecture of Trump Tower. It is an intentionally uncomfortable space, not only because of its slightly smaller-than-life size, but also because of its clear disutility. What is one supposed to do in the foam and plywood kitchen other than watch oneself and be watched on camera? 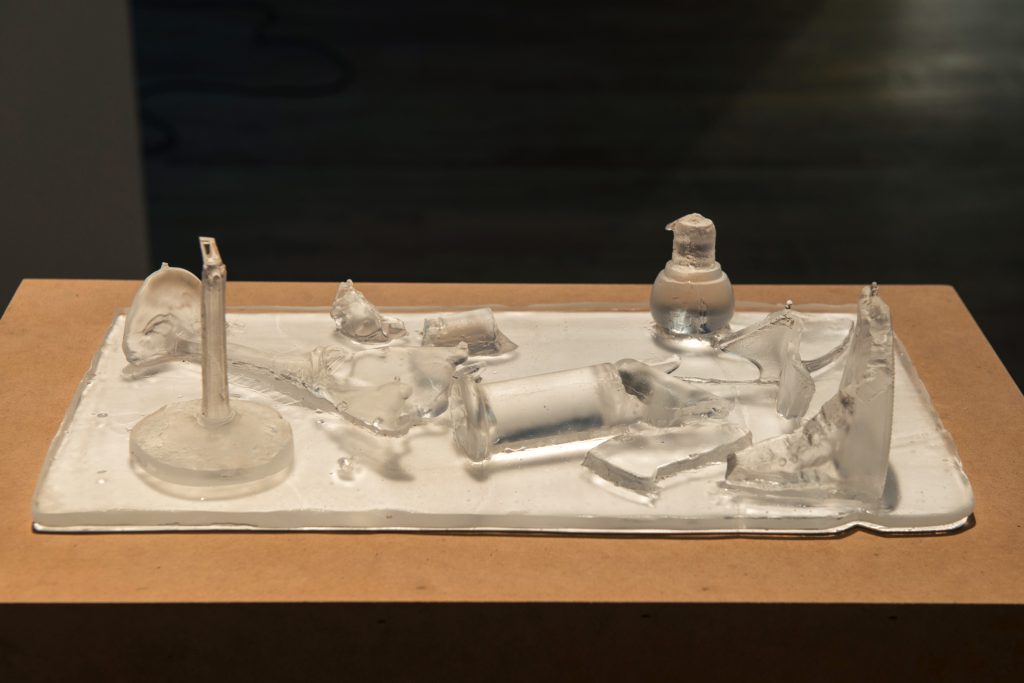 The McCoys’s final gestures toward decay and frustration are a series of cast glass sculptures intended to reference the period “after the party ends.” Shards of wine and scotch glasses become heftier in their castings, resulting in unfortunate lumps of material. Heavy and impotent, the sculptures form a final landscape within the exhibition. There are few crisp edges left within the casts, and though the pieces are named as though after “bespoke” labels (Lauren, Breslin, Calloway, Adeline, Onsro, all 2016), their value as luxury commodities is limited to their status as artworks rather than their function. Of course, this last point is perhaps the most important to address. Though the Trump Tower resident must appear to care about art with their dining table sculpture and Mapplethorpe catalogue, it was the introduction of “crude” paintings into the apartment that caused the broker’s malaise; the McCoys then suggest that, far from obsolete, such artworks as theirs have a role in disrupting the smooth streams of words that can “make people say yes.” The key to protest is making people say no. Though the broker offers no pointers on this topic, perhaps it is a strategy best discussed outside Trump Tower.

Next post Gary Garrels: In Conversation With Leigh Markopoulos