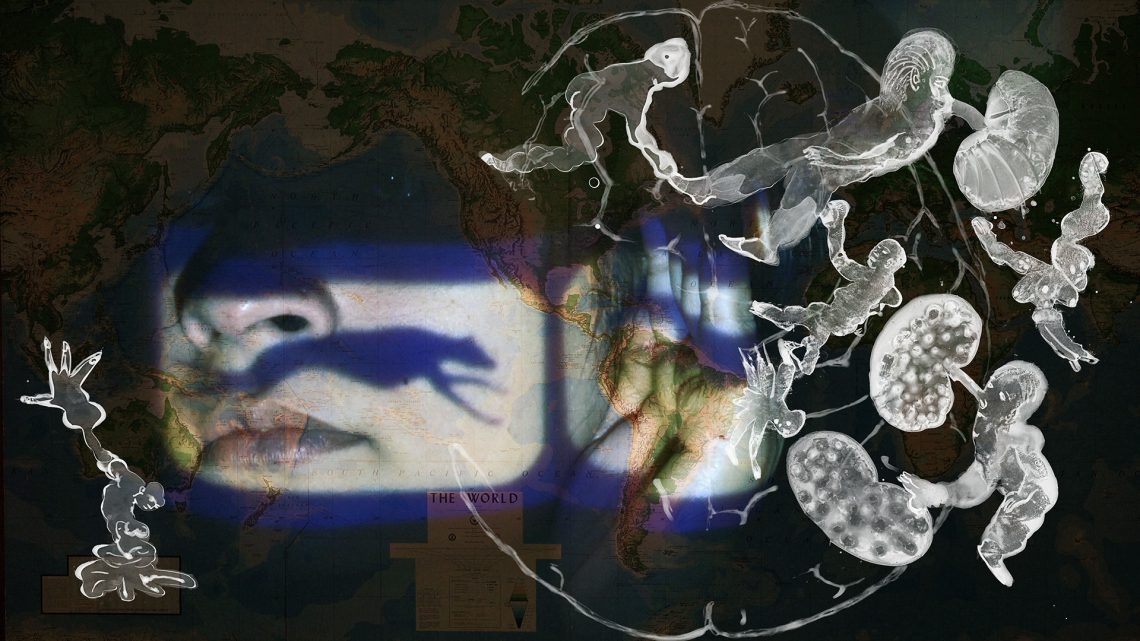 A woman surrounded by a cloud of darkness: Is she dreaming? World maps are projected onto her face. America spans from her dark eyebrows to her flared nostrils. Bodily contours align with geographic borders; here a single image represents the force of biopolitics. The image series continues to show this woman half-awake or with her face obscured by a fabric wrap, but always against a dark void in which scattered images and illustrations float. “In Search of Vanished Blood,” a 1965 poem[1] by renowned activist and Urdu poet Faiz Ahmed Faiz, replaces the map as a projection in the latter image. “There’s no sign of blood, not anywhere,” the text begins. “But, unheard, it still kept crying out to be heard. / No one had the time to listen, no one the desire. / It kept crying out, this orphan blood, / but there was no witness.” A neglected trace of violence enters the scene. Its impact is not directly seen, but its ties to women’s bodies are clear in Nalini Malani’s inkjet prints. This series occupies the first gallery of her show, In Search of Vanished Blood, at the Institute of Contemporary Art (ICA) in Boston. It merges with projections and painted Mylar cylinders in an attached installation. Ultimately, by collaging an ahistorical sample of texts and images into semi-transparent layers across media, Malani demonstrates how women’s bodies have been connected to violence and territory for centuries. 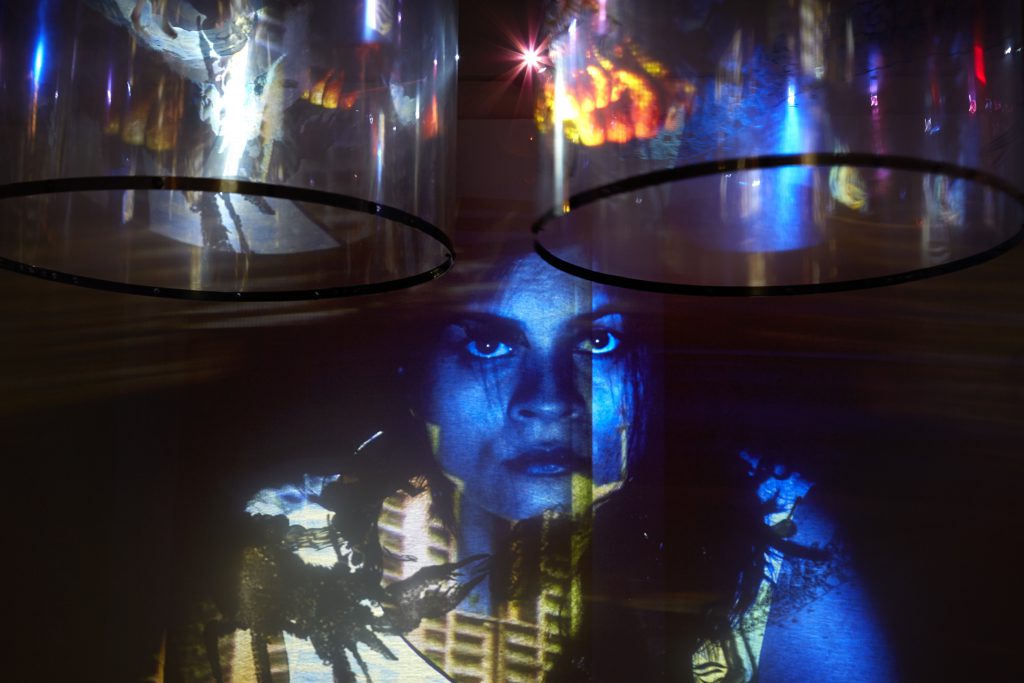 Line drawings of airplanes and washy drawings resembling X-rays are also superimposed on those women’s faces. Kidneys and worms, men and women bearing weapons merge together into hybrid forms. Though their significance is not clear from the prints, their rendering here introduces a narrative thread that seems spun from mythology, folklore, and science fiction. A nearby stop-motion animation piece strengthens the thread. Three figures are formed from shaky, gestural lines on graph paper. Though discrete, their many limbs are sometimes intertwined. Flying demons, a swarm of eyes, and a horde of flying bullets storm the page until a climax, after which the action is reversed. The chaos dissipates, the three figures disintegrate, and all that remains are their cubist faces. 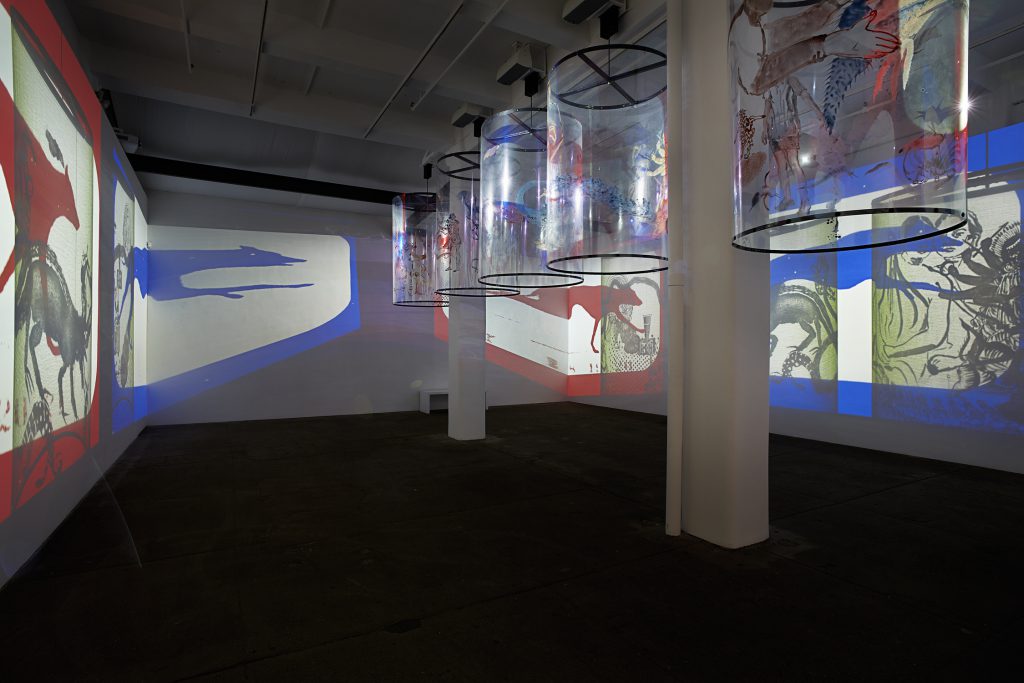 The juxtaposition of fluidity in illustrated lines with structure in graph paper carries over into the next room. In a process similar to stop-motion, five transparent rotating cylinders like huge lampshades create looping scenes when illuminated by projections. Painted on their surfaces are figures not unlike the aforementioned milky kidneys, anthropoid ghouls and mythological creatures. A fish, butterfly, scissor, spine, and pelvis appear alongside more complex images of a man holding a bird as if to prepare it for eating, two women kneeling together, the ten-armed Hindu goddess Kali, and a huge flying figure clawing two semi-humans. Though disconnected, all images are drawn in a similar style somewhere between realistic representation and graphic illustration. The turning of these cylinders is ceaseless, as if their narratives could be endlessly reincarnated.

The six projections illuminating these paintings integrate imagery from Malani’s prints, especially of the women’s faces, with other stop-animation sequences and environments—though here the women appear mostly in videos rather than stills so that subtle movements like blinking and lowered heads catch the viewer off guard. As if this were some persistent daydream, the projections (interacting with the cylinders) spiral across the four walls and bleed into the first gallery space. A viewer’s first impulse might be to try to trace these images around the room. Yet their streaks of color and static interruptions are too difficult to follow. Instead, it is best to stand still through several iterations of the eleven-minute sequence until cohesive segments emerge within the piece.

In the opening minutes, the woman whose face is obscured by cloth is shown from the shoulders up. Slowly she turns her face from left to right, but because her face is delineated only by small bumps and dips—without tracking eyes or moving lips—she seems strangely absent, as though in a trance or asleep. Indeed, on the next wall a woman’s body appears, still and on her back. Static surrounds her body and the other three walls. Female voices murmur in the background. Some of the few audible words reinforce the idea that this installation represents some feverish nightmare: “Shadows of the evening… across the sky.” The woman’s face reappears, now alive and awake, and when the light passes beyond her face, her eyes can still sometimes be seen gleaming in the dark. This haunting image eventually disappears, leading into short clips of another woman whose body is fragmented into frames of abstracted flesh. Onto this body are superimposed smears of red blood that seep into her body’s creases.

Explicit violence, that vanished blood, is now before the viewer, and its victim speaks in abutted phrases that can be imagined as semi-transparent audio layers. “This is Cassandra speaking from the heart of darkness…” a woman’s voice narrates. “I turn the milk of my breasts into poison. I take back this Earth I gave birth to… I bury it back in my womb.” The declaration of empowered creation and destruction is drawn from German playwright Heiner Müller’s postmodern work, Hamletmachine[2] and references Cassandra, the Greek mythological figure and heroine of Cassandra, a 1983 novel by another German writer, Christa Wolf.[3] In Greek mythology (and in Wolf’s imagination), Apollo granted Cassandra the gift of prophetic visions in exchange for sexual promises, which she later renounced.[4] Apollo, angered, modified the gift so that her peers would never believe her visions (including that of the downfall of Troy[5]), which resulted in her near hysteria. In Wolf’s Cassandra, the eponymous figure stands for Western women, “whose talents and intelligence have been suppressed in order to serve the interests of men, power and destruction.”[6] A parallel female figure, Kali, the Hindu goddess painted onto one of the rotating cylinders, not only stands for bloodshed but also represents the triumph of woman over man.[7]

When the narrator continues, the viewer learns that the blood-spotted woman in Malani’s video feels “something sticky under her ass and waist.” The story is drawn from Indian author Mahasweta Devi’s Draupadi.[8] In this final cited text, the central figure is a woman (perhaps a metaphor for land itself, like in Malani’s prints, as Clara Nubile has suggested) who is taken captive during a peasant uprising and brutally raped while her mind fades in and out of consciousness, reconstructed as a nightmare in Malani’s flurried scene. When she finally escapes, she declares to the chief of her captors, “You can strip me, but how can you clothe me again? Are you a man?”[9] Feminist scholar Gayatri Spivak and others have read this scene as an instance of the subaltern speaking, the unarmed woman declaring herself powerful against the force of armed men.[10] Naked, she is more powerful than those clothed, and indeed her bareness is what empowers her.

Paralleling such inverted or substitute language, illustrated hands speaking in sign language next interrupt the scene and flicker across a woman’s face. Though this last “story” is inaudible and coded to most viewers, it is collaged into the depth of narratives spanning cultural histories in which such similar female figures appear. By citing several preexisting texts, Malani mimes the approach of Müller, who renounced the originality of authorship by writing in the style of various famed writers, most obviously Shakespeare for Hamletmachine. In visual and literary tongues collapsed into a cyclical video of violence and empowerment, Malani then attempts to rearticulate what each of these female figures deserved, in spite of their injuries and ignored powers: to be recognized for their lost blood. 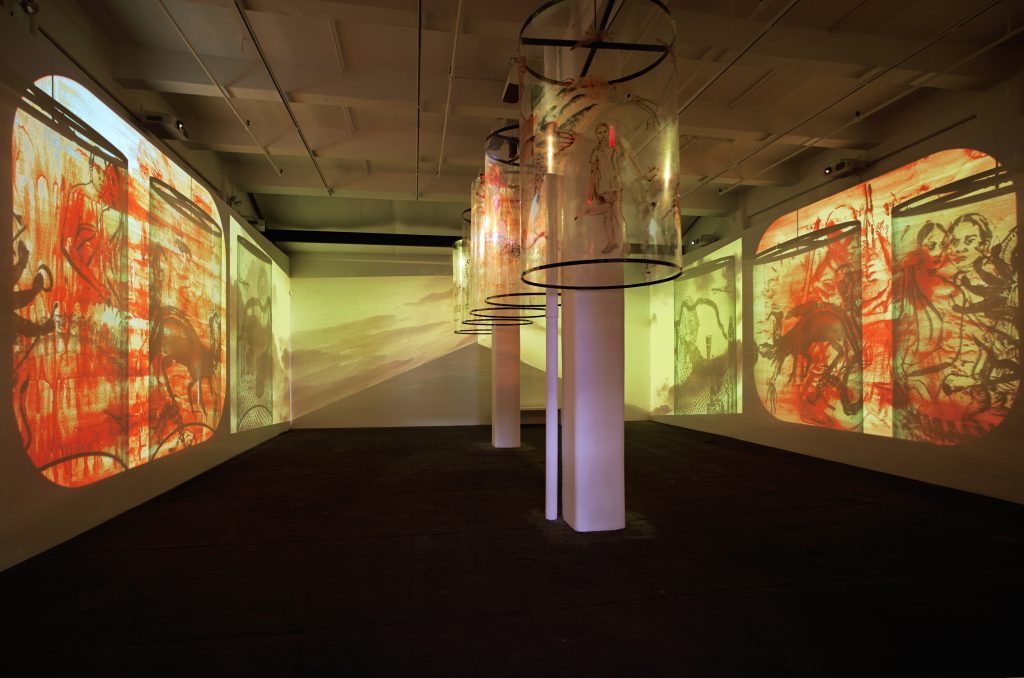 Next post Kour Pour: In Conversation With Robert Summers 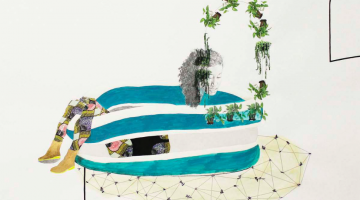