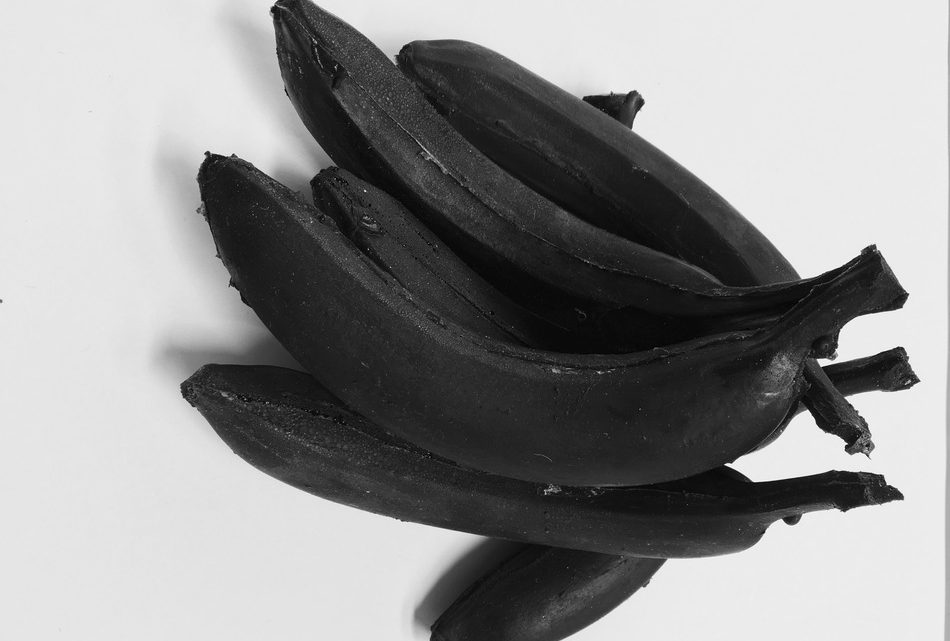 Who wouldn’t want to squish and smear figs, blueberries, kiwis, apples, basil, grapes, musk melon, and prickly pear all over a canvas? This canvas is on the floor. Not anyone can do this beautifully—the male dancer in the iPad screening of this performance lays down a series of movements, as a woman reads, taking turns with what is presumably Wood’s voice. Giantess (After Cézanne) (2016)—at the front of the gallery holds the fruits of this collaborative performance. Thrown over Wood’s preliminary marks, a tube shaped dress with two-inch fabric strip straps graces the thick white canvas, next to flecks of fruit dregs. 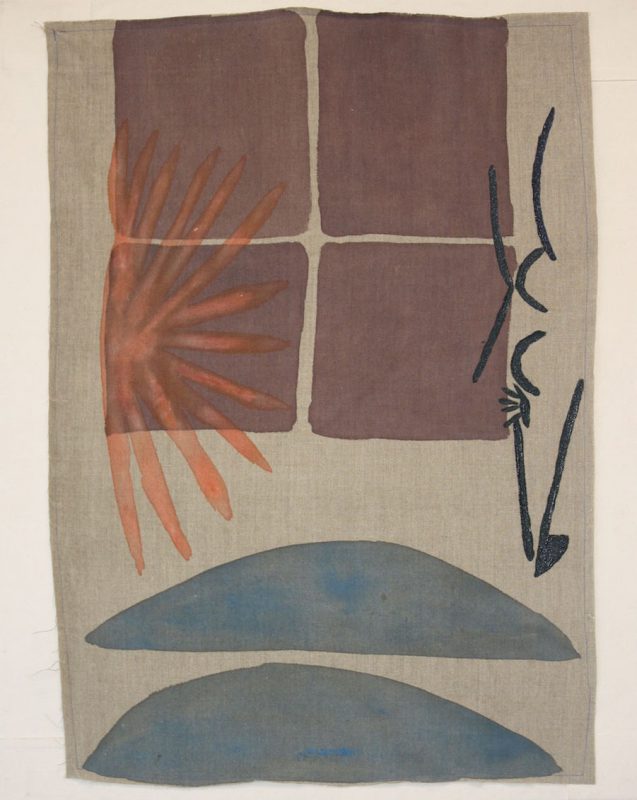 Cézanne thoroughly digested Les Fleurs du Mal, from which Baudelaire’s Géante [Giantess] poem comes—in it, beyond loving all things giant, is a request to be swallowed by the woman, returned to pre-birth, as Jonah in the whale. Littered around this tribute, carcasses of the sexual are peppered around the gallery deliberately provoking—Lilith Eating Adam’s Apple, and Looking at a Field of Yoni Flowers (both 2016) tread and toy, suggesting an insatiable appetite, and happily tribute history as much as question health’s demise. Six Small Deaths (2016) is rubber and plaster black bunch of bananas on a square ceramic plate. Healthy Tears (Me and Andy Warhol) (2016) shows us the cheeks of a nude man jacking off to jaundiced abstracts.

Painting in general is hardly simple; each specific decision creates a complex, and assertive statement—the painting functioning both as a whole and a system of specific colors and shapes. Wood’s works assemble around food and bodies, and the titles offer us a place to find ourselves—in Albert Heijn, in tributes to Cézanne and Duchamp, in a bowl of fruit from a French still-life. Traditions are deliberately smothered. In Me Serving Squid Ink Pasta (2016), blob-swirls on the canvas chase a frantic, quickly streaked, nude blue, outlined self-portrait holding a tray of plates made of streaks of concrete. 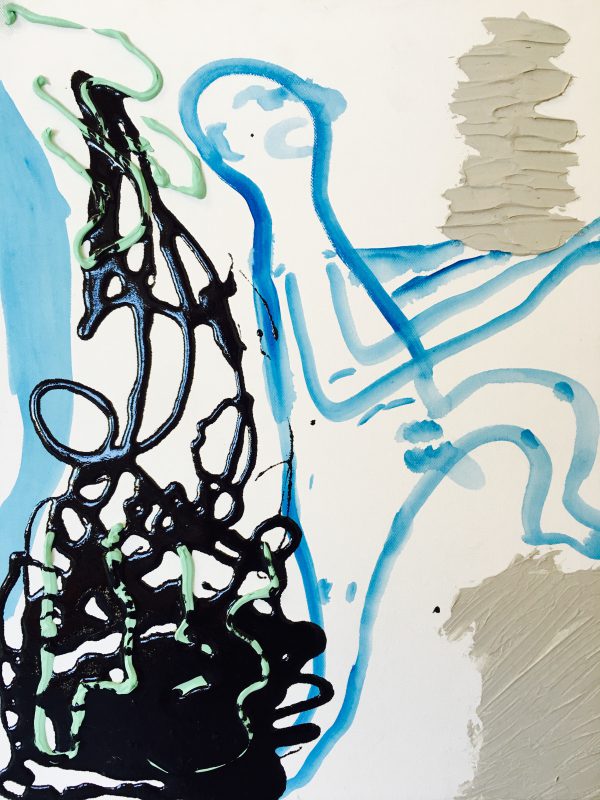 Wood’s materials are as foreign as the foods we ingest—paintings make use of cel-vinyl, or flashe—a vinyl-based matte paint, similar to gouache, leaving a velvety, primitive but soothing look. While some canvases are coated with a clear gesso, this is barely discernible—blank fields reveal the canvas, and the white gesso, typically used in the underlay for oil paintings, is found instead as a top surface. 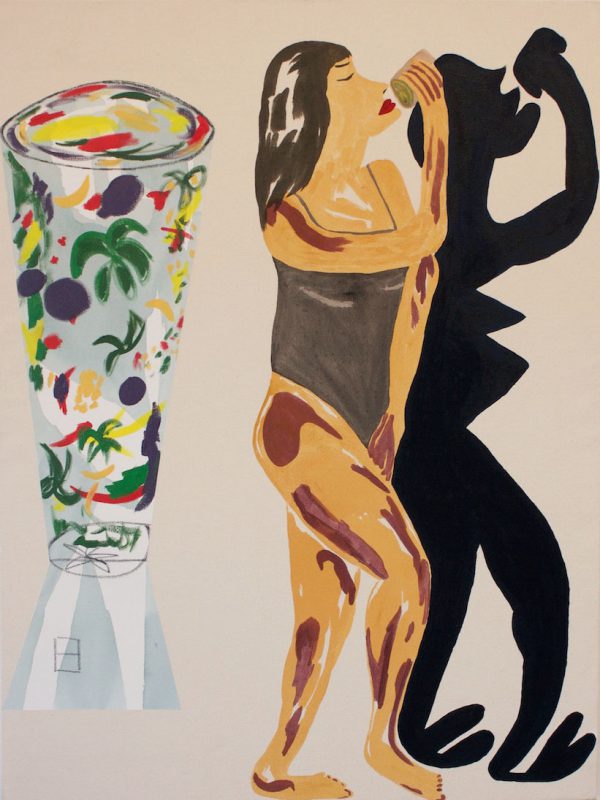 My Skin looks Radiant After my Morning Smoothie (2016) stands out. A woman rendered archaic, too familiar, head thrown back, drinks a smoothie full of tropical fruits and palm tree leaves. Despite light-hearted hues, the shadow of her belly behind her turns jagged and triangular like a sawtooth, mocking the elixir of a certain LA lifestyle. A crass approach is blended amongst shades of yellow, linen, charcoal, oil stick… Night and Day (2016) consists of a double-image, like a negative space painting exercise, over sewn burlap. Grapes leaving a pitcher, a vase, a curve that is a bowl, and below, in night, the image’s replicated inverse: swoopy yellow-beige lines outlined in smooth black—the pitcher a skeletal spout spewing. And, is someone lying in a hammock under a palm tree? 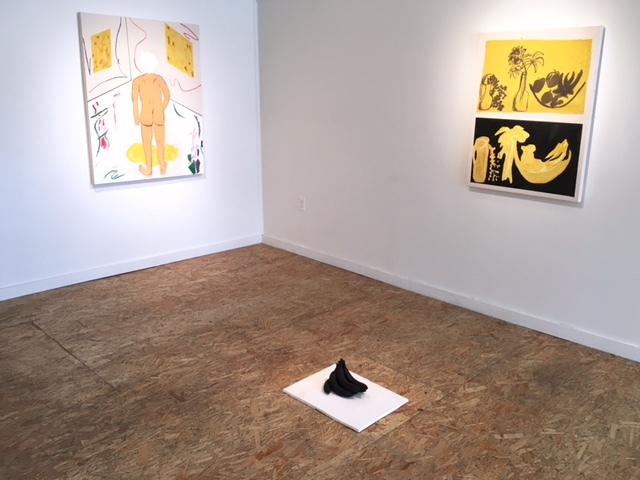