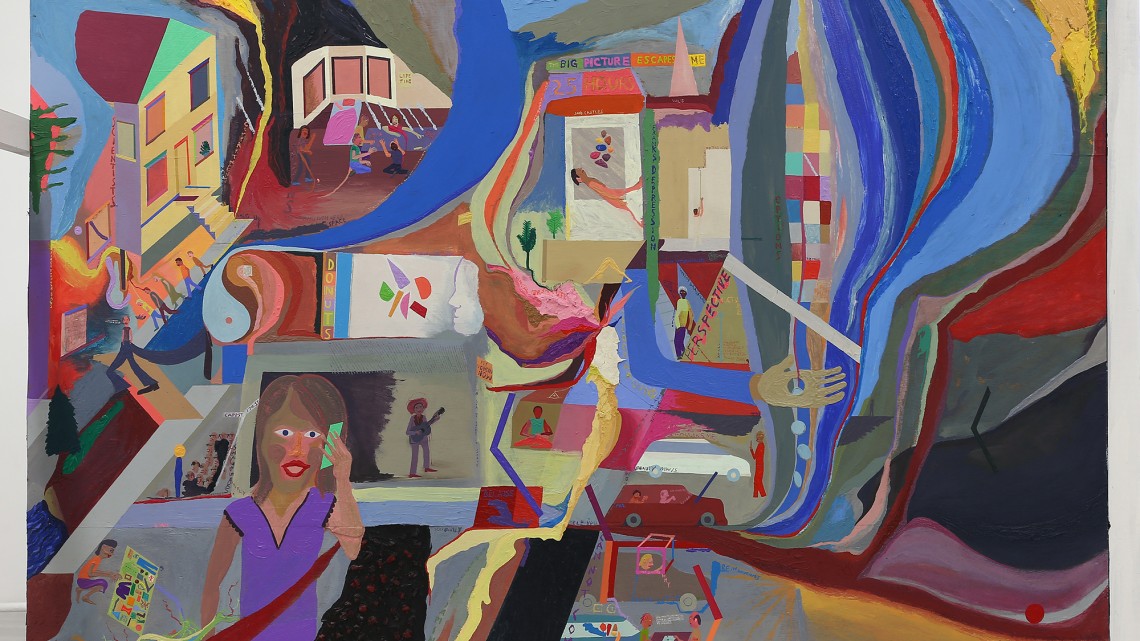 Being in a room of works by Chris Johanson is like standing on a noisy street corner. The works seem to be talking—or shouting—at one another. Beams of energies expand and contract, mingling at a frenetic pace, and you the viewer are caught in the middle. In contrast to his Mission School compatriots Barry McGee or Alicia McCarthy, who find the sublime in the grit of the street, Johanson ham-fists his way through his subject matter to portray a world mired in shit-like paint squirts and urgent swipes of the brush. It is perhaps this directness that always makes me aware of Johanson’s presence, his awareness of the outside world—a world he catalogues with a watchful, discerning eye, then excretes onto a painted surface.

In Equations, Chris Johanson’s second solo exhibition at Altman Siegel, the artist tries—with a signature combination of sculpture, drawing and installation that he calls Life Arts—to solve for X. The variable X in this case represents that special sauce in a work or body of artworks—a je ne sais quoi that separates the good from the forgettable. With titles like I Am In My Body Now (2015), The Self (2015), and The Big Picture Escapes Me (2015), Johanson is also clearly after another more ambitious formula for peace of mind and understanding amidst the information overload of contemporary life.

In this exhibition, the impact is in the whole and not the parts. The works are made up of repurposed wood made into panels and painted on both sides, as well as wall-hung painting conglomerations that combine new age-y imagery with his idiosyncratic painting style. Each of his sculptural works stand like billboards or street signs, positioned close at perpendicular angles so that the viewer has to navigate around them. The front panels depict Bruegel-esque scenes of daily life in California with people driving, a man doing yoga in his speedo, someone playing guitar, a woman talking on her cell phone, and bits of text describing conversations or thoughts. The other side, the back of the panel which reveals the stretcher bar construct, is painted with abstract compositions that hint at larger concerns with arrows signifying time, a question mark and text reading “life.” The moments of text often end up feeling a bit trite in their literalness, but are saved by the earnestness with which they are painted, a characteristic of Johanson’s work.

Abstraction in Johanson’s work takes the form of colorful shapes and prismatic rays, often swirling around or emanating from the figures in his paintings. This painterly vocabulary (copied a million times over by subsequent generations of Mission School artists) indicates an emotional resonance or otherwise unseen connection between subjects akin to Star Wars’ “the Force,” as seen in Los Angeles with Pills (2015) or Lecture Series/Abstract Mass (2015). Abstraction is also employed as a referent to the Modernist canon as a way to drive his personal narrative as in Reimagining the Square Trying to Make It Round Like a Circle (2015) or the back of Dominoes and Impermanence with Love (2015), which harkens back to Mondrian’s geometric portrayal of Manhattan streets. 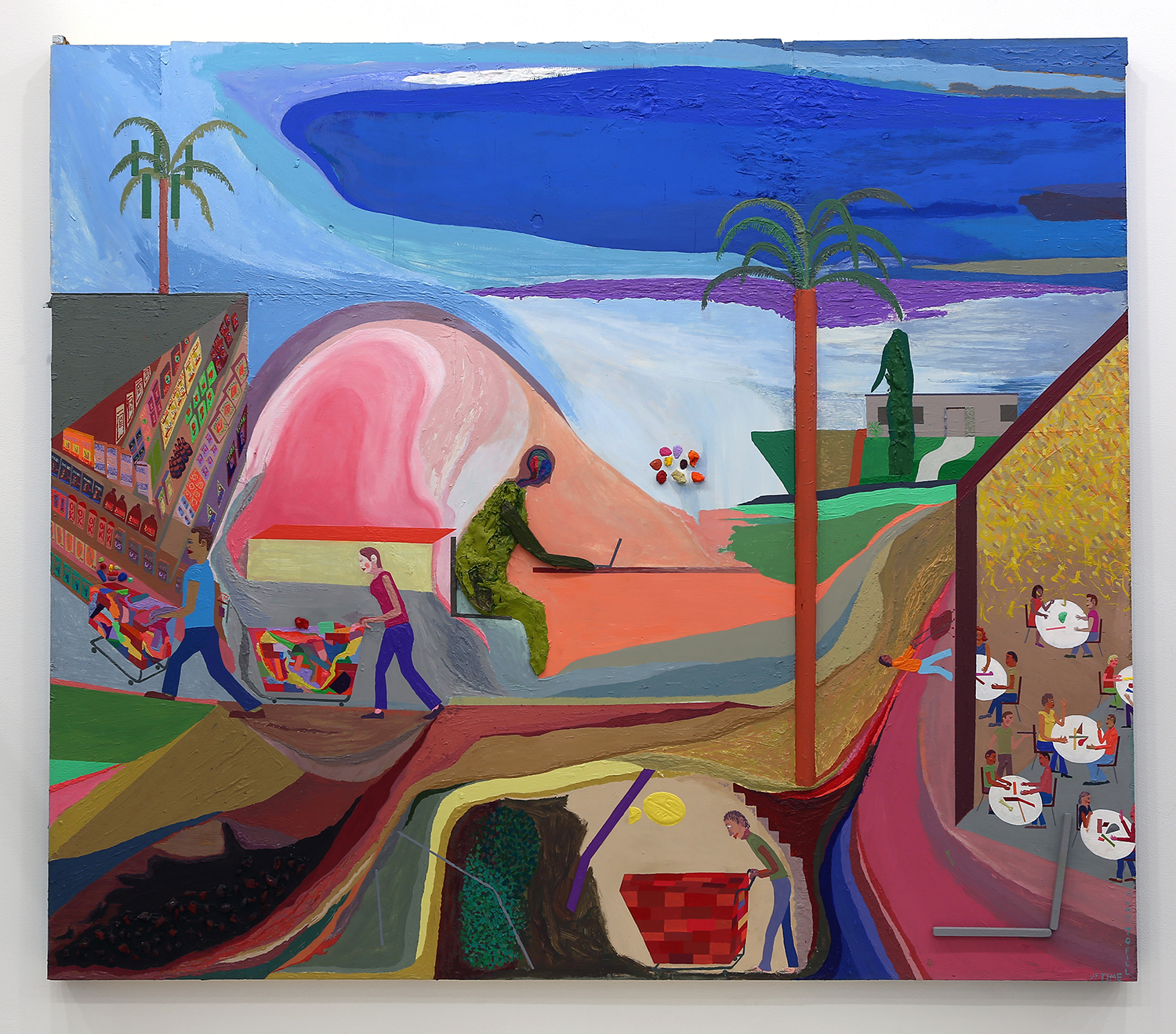 A recurring theme throughout the work is the ubiquity of technology in the day-to-day lives of his subjects, and its connection to privilege. A small bas relief painting, I Did Not Yet Know/Technology (2015), shows a brown face hovering over two lines intersecting an obtuse angle. It took me writing this to consider that those two lines, presumably the profile of a laptop, could have been anything else. Johanson relies on that shape’s indelibility in our collective psyche both here and again in Los Angeles with Pills to communicate this symbol of technological agency and affluence.

Los Angeles with Pills, a wall-hung work, portrays a vivisection of Los Angeles depicted in varying thicknesses of oil paint and painted wood cutouts. Multiple perspectives show us a person working on their laptop, a panorama of the ocean, people grocery shopping, an overhead view of people eating at a cafeteria. The title suggests a level of self-medication within the culture through shopping, eating, and working. Shopping carts symbolize both agents of consumerism and a survival tool for the homeless—a common sight in both Los Angeles and here in San Francisco. 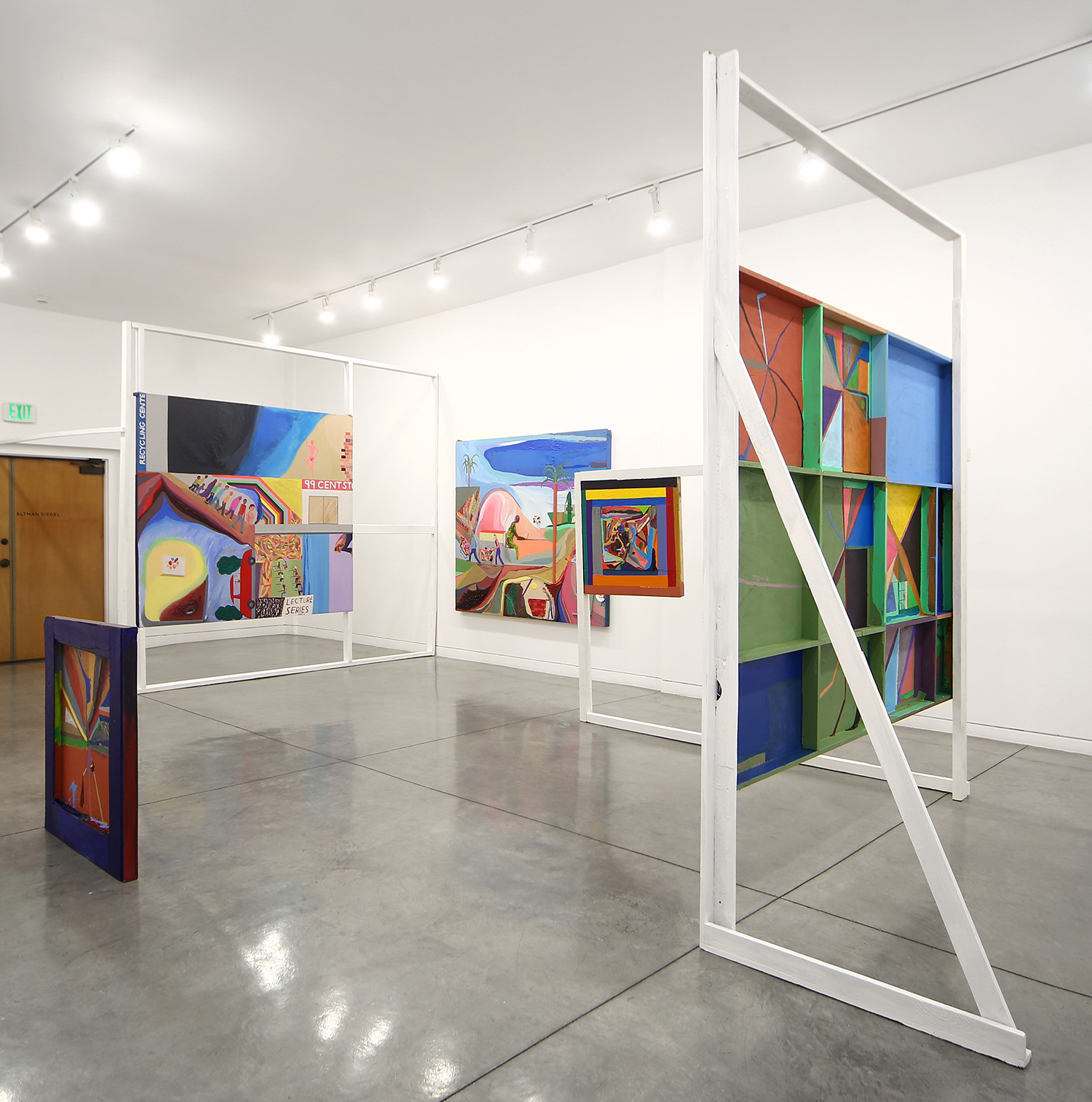 The cell phone looms large as an image of social connection/isolation and gentrification in The Big Picture Escapes Me. Locals will recognize the intersection of 17th and Capp Street in the Mission District next to a large figure of a woman on her mobile. Long-time residents will know that formerly sketchy corner as a site of gentrification, now home to a slew of tech live/work collectives.

In mathematical formulas, a variable is a quantity that can change within a given problem. In Equations, Johanson seems conflicted on what exactly is the problem as he conjectures about the nature of art and life. His intuitive mishmash of a studio practice that makes up Life Arts keeps the work open-ended, making X a variable we must solve on our own terms.