The Whiteness of the Whale: Paul Graham at Pier 24 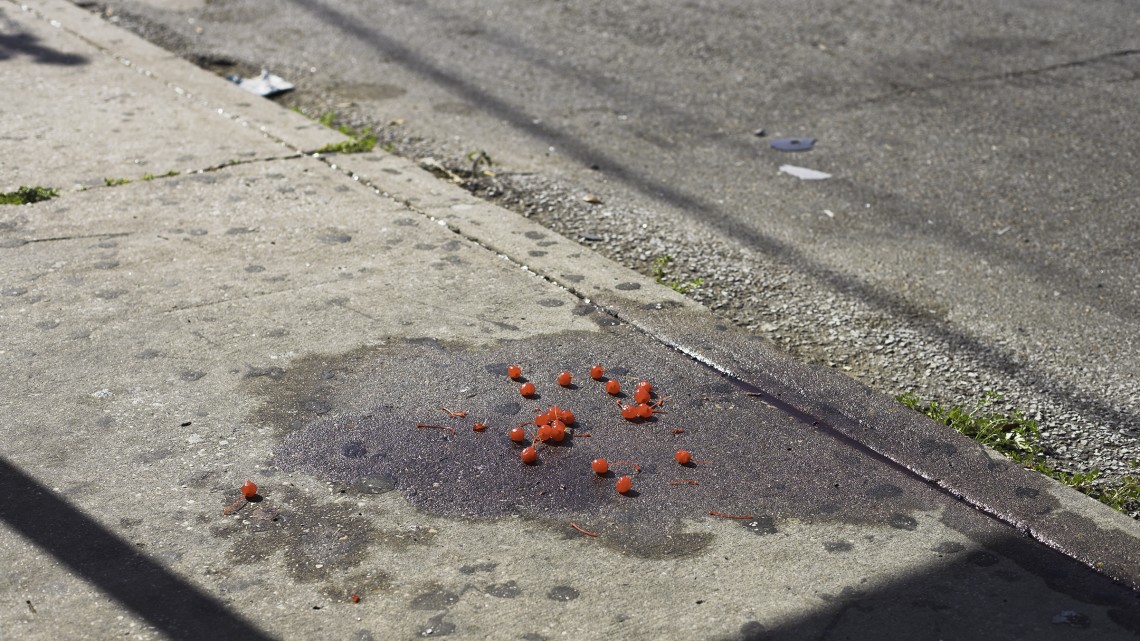 With The Whiteness of the Whale, Pier 24 offers a sweeping, generous retrospective of what might be called photographer Paul Graham’s “American trilogy,” comprising his three major series of photographs taken across America between 1998 and 2011. The first series, American Night, focuses on the contrast between affluence and destitution in American cities and suburbs. The second series, a shimmer of possibility, presents accounts of mundane or cryptic moments with people Graham encountered in his travels. And the most recent series, The Present, takes up the genre of street photography in Graham’s now-home of New York City.

In an interview for Pier 24, Graham himself describes each of these series as pointing to an interest in a different formal aspect of photography, all thematically related to seeing itself, though he was not necessarily aware of this while making the work. The mechanics of photography that anchor each of these three series are the aperture, the shutter, and the focus; respectively,  light, time, and the subject are the related thematics. 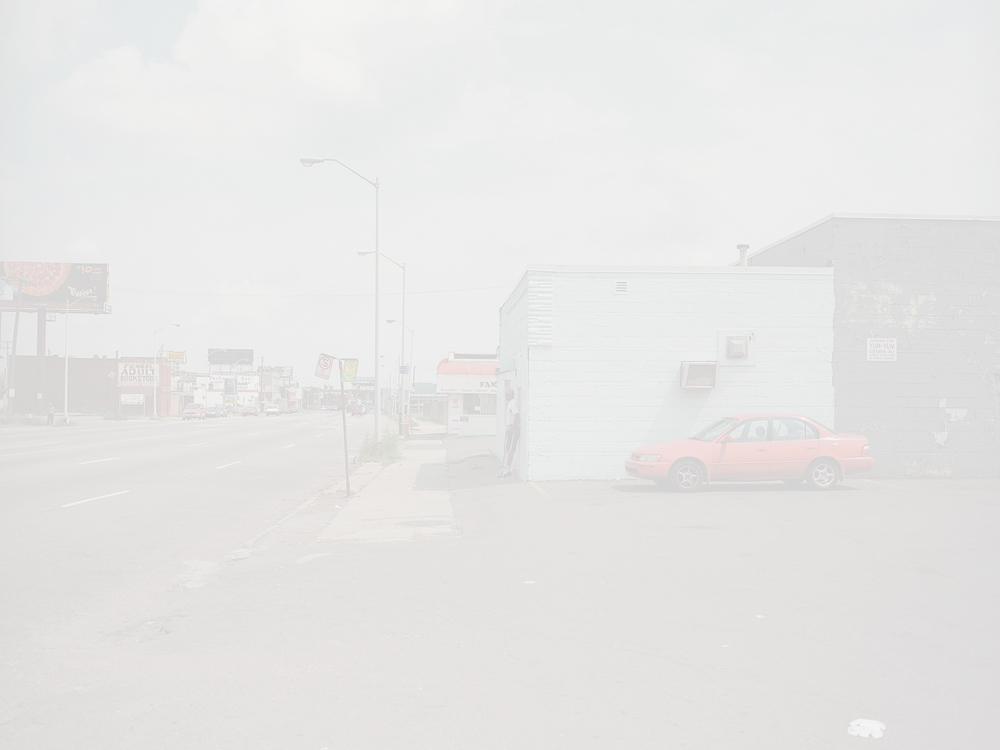 American Night, with its exploration of overexposure and blindness, is concerned with the aperture of the camera, which controls the flood of light through a lens, and thematically with invisibility and what we cannot or choose not to see. This body of work is the most sociological and explicitly political, with images of wealthy suburban homes shot in sharp, bright contrast alongside scenes of homelessness and poverty that are almost completely whited out from overexposure to light.

The shutter, which divides up the ever-changing world into a surface of visible moments, is explored by the images that make up a shimmer of possibility. The most intriguing and at times mystical of Graham’s work, these photographs are divided into sequences exploring spots of time from changing perspectives, as though the viewer is glancing around while watching a quiet scene unfold. The moments themselves are banal, or would be, were it not for Graham’s sharp attention to gesture and body language. These sequences are often presented in pairs, with, for example, images from a transcendent sunset in North Dakota above a series of an agitated woman walking along a New York street, holding her head. 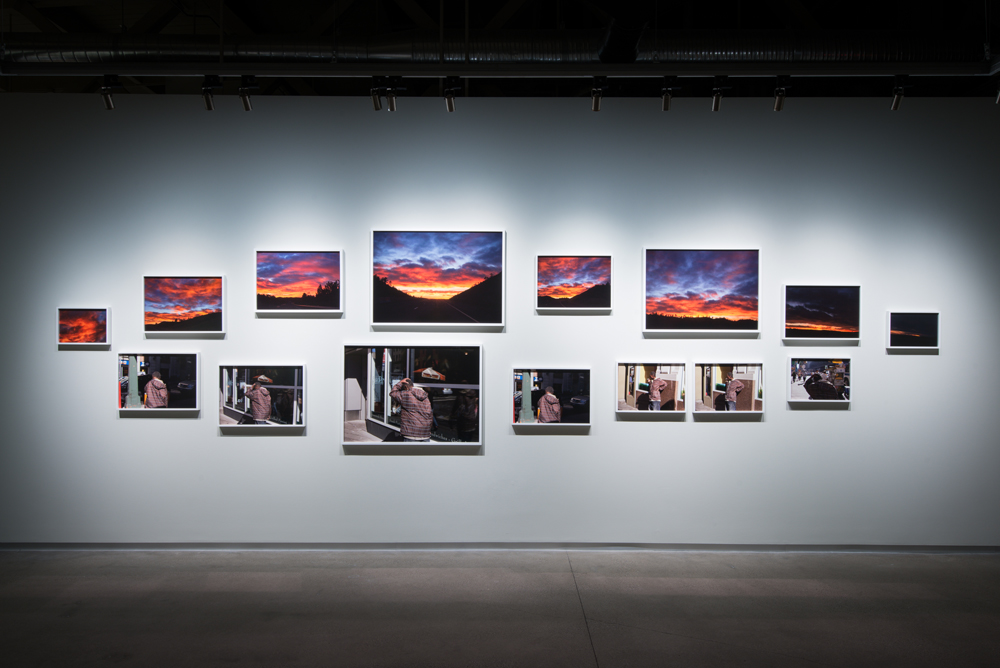 Finally, the street photographs that make up The Present, offer a shallow focus that shifts onto different subjects across series of two or three images, concerning themselves with attention. These photographs are the most legible—they participate fully in the genre of street photography, unlike those in a shimmer of possibility—and also the most concerned with the way we experience the lives of others in the city as fleeting presences of our ever-shifting attention.

This conceptual framing is also manifested in the installation decisions of the exhibition.  American Night is organized with the dark city photographs displayed in an interior gallery that is also literally hard to see at first. The photographs for a shimmer of possibilities are hung in somewhat meandering lines that read horizontally like film stills or text. And the photographs in The Present are consistently presented at eye view, hung low to the ground as though the street is part of the gallery and the lens is the viewer’s eye. 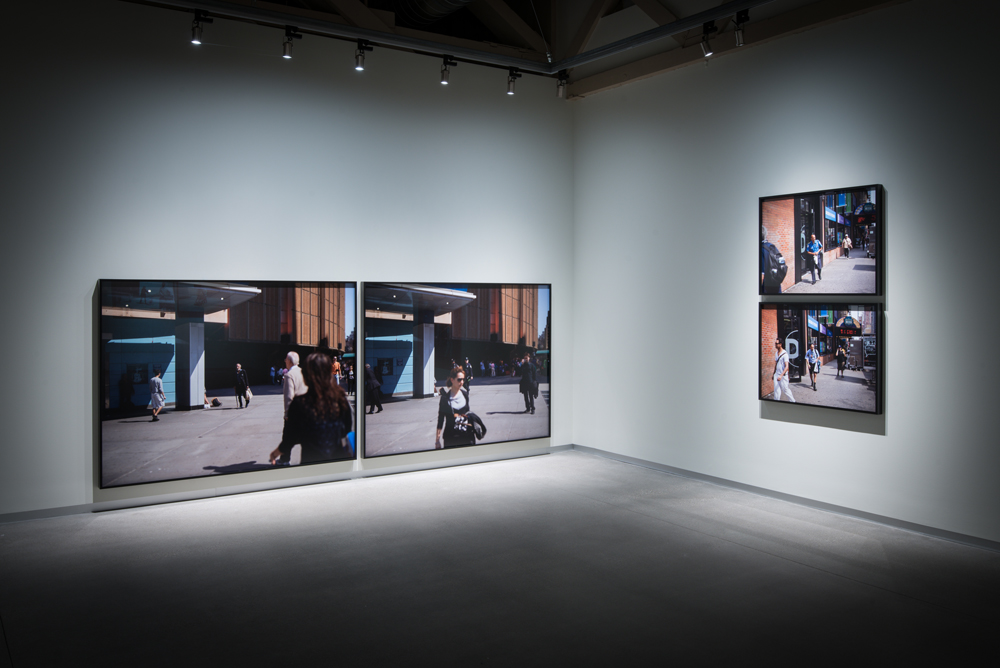 But Graham’s work is also more unexpected and idiosyncratic than this arrangement might suggest. The exhibition is not named after what is perhaps the strangest chapter in Moby Dick for nothing. And in fact, the form of the book is just as relevant to The Whiteness of the Whale as the machinery and chemistry of photography.

Graham’s photographs have long been released as books alongside the shows, and Graham has been doing the layouts himself for years. This attention to page layout comes out strongly in this exhibition, in which individual walls and galleries don’t so much display as read like narrative stories about unfolding moments of time. 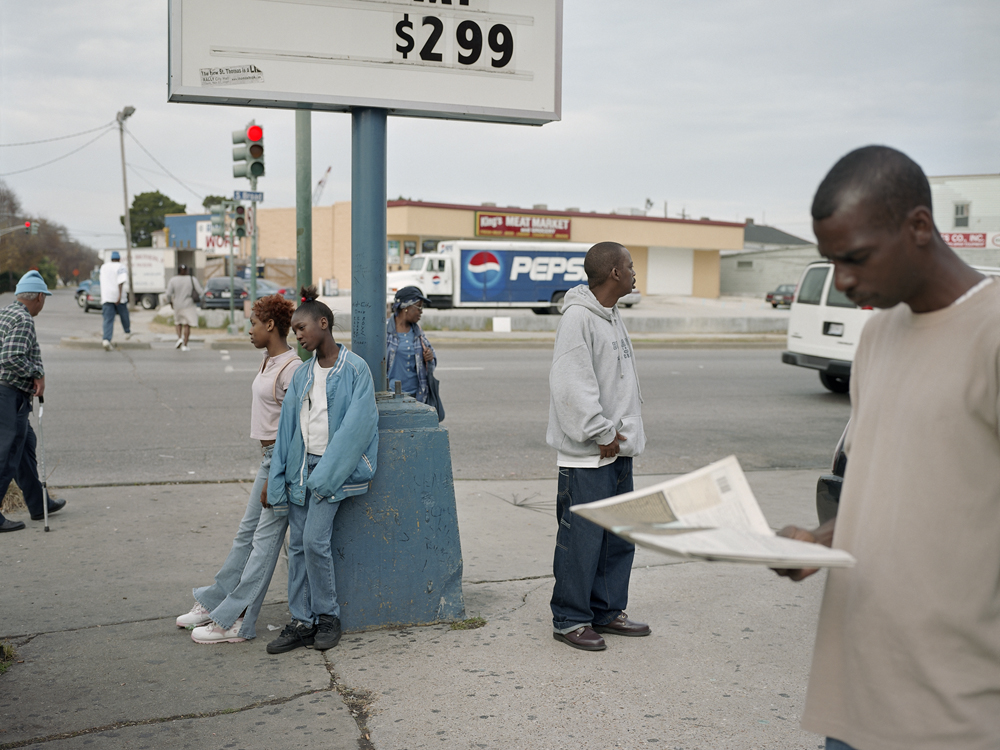 The Present and a shimmer of possibility, in particular, are structured like short stories, with one or two characters whose lives change during the moment we see them. There is a strong concern with the passage of time, but it has as much to do with plots (a man mowing a lawn in shimmer; a woman crying as she walks down the street in The Present) and stories we try to read into lives we will never know, as others come and go out of our sight. These two series are studies of character that are, it must be said, massively empathetic; there is nothing cynical or clinical about Graham’s work. This quality is perhaps most apparent in The Present, in contrast to so much contemporary photography taking up the language of street art that is staged and turned into an intellectual problem—as, for example, with many of the Vancouver School photographers.

By comparison, the earlier series, American Night, makes an explicit and even heavy-handed argument at times. It is easy to see Graham himself turning from a sociological perspective—an outsider in America in this first series— into a careful, everyday observer of the city he lives in, most interested in giving brief, even teasing glimpses into otherwise unknown characters’ stories.

Next post Hippie Modernism: The Struggle for Utopia at the Walker Art Center, Minneapolis