On Point 2.08: The Lombardi Effect 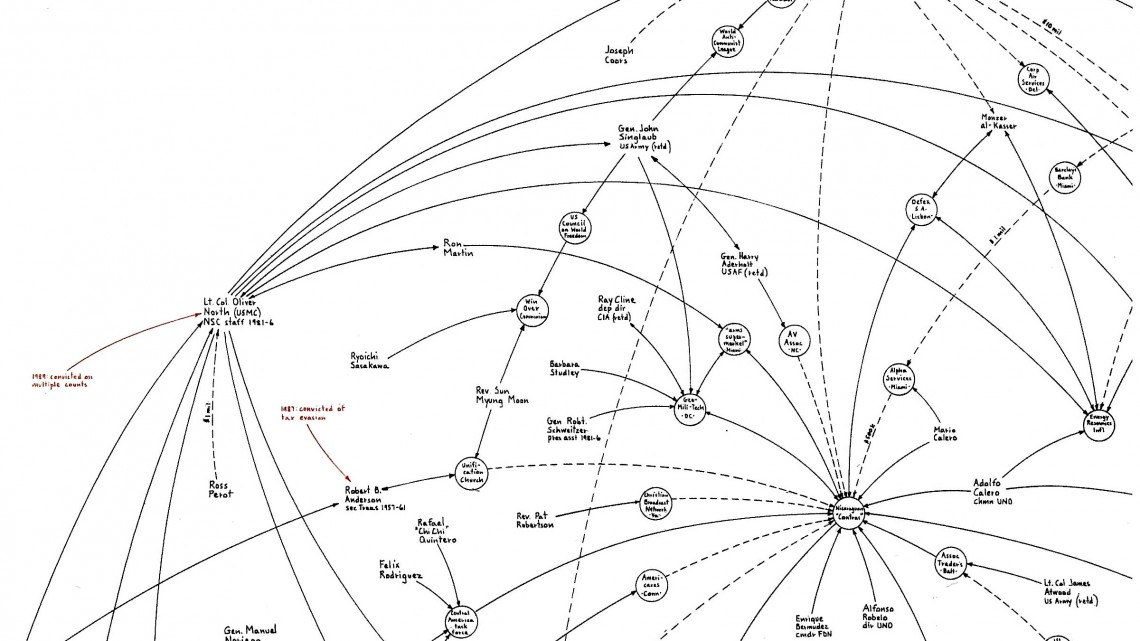 I was late to the Mark Lombardi party. It was not until the beginning of 2004 that I had ever heard about him or his work, let alone ever having seen it. But it finally came to San Francisco in the form of a posthumous retrospective presented at Yerba Buena Center for the Arts titled Global Networks, curated by Robert Hobbs and originated by Independent Curators International. At that time, Lombardi had already been dead for 4 years, having taken his own life at the age of 48 in March of 2000. At the time of his passing, the 9/11 terrorist attacks were still more than a year away, and the onset of hostilities of the 2nd Iraq War would not commence for another two years. When Global Networks opened in San Francisco, those hostilities were well underway, as was a booming stock and real estate market that were the beneficiaries of a shop-‘till-you-drop homeland defense policy that would take an additional four years to come to grief in the form of the financial crisis of 2008–2009.

It took some time to hone in on the genius of Lombardi’s project. His exhibition consisted of about 15 drawings, most of which quite large and all done in crisp black ink on luxurious white or off-white paper. Their scale could be said to self-consciously reference many of the works of Jackson Pollock, but that might just be a red herring of potential interpretation that rests too comfortably on coincidence. The carefully applied ink of Lombardi’s drawings showed precisely arcing lines that coalesced at and diverged from various intersections to form spiderweb-like configurations, all of which were labeled with neat lettering. This lettering indicated names of individuals, criminal organizations, law firms, and financial institutions that were very much in the news from 1995 to 2000. That was a time of financial boom-and-bust that was brought about by the bad corporate behavior of institutions like the Houston-based energy giant Enron and Charles Keating’s Lincoln Savings and Loan Association, not to mention the first dot-com crash. One name that appears in several of the works is the Harken Energy Corporation (ticker symbol HKN), which at some early juncture purchased the Spectrum Energy Corp, which was owned by George W. Bush. Bush continued on as a highly compensated member of the Harken board until the point when he inaugurated his presidential campaign in late 1998. One could almost say that Harken Energy and the nefarious connections around it represented a kind of great white whale of perfidy in Lombardi’s universe of omnipresent malfeasance, but that universe was a vast and sprawling one, with many players located in maddeningly complex relation to one another.

At first, I thought that Lombardi was simply doing an artsy parody of that time-honored American folk art form known as the conspiracy flow chart. The best examples of that tradition are the most far out and fanciful, showing links between such things as the Knights Templars, the Federal Reserve Bank, and the royal family of Great Britain. Frequently, the Vatican is depicted, and imaginative citations of Masonic lore and symbols are given pride of place alongside the Illuminati, the Reptilian Shapeshifters, and those happy rapscallions who cremate care every summer in the Sonoma county woods. And then there are the Kennedy assassinations, of which so much has already been said and speculated that I can only excuse myself from any further comment. The key point about the conspiracy flow chart is that it proposes some form of secret, guiding order to the apparent chaos of historical events, and therein lies the core symptomology of paranoia—that being the moment when speculation sans evidence becomes embraced as fact. The discovery and documentation of such orderings, if and when they exist, is of course something of a gold standard for any kind of historical study. This is because bringing hidden motivations to light is what historical research is supposed to do, especially now when so many people are content to recite their own press-release fabrications as holy mantra awaiting the dubious confirmations given over by the Facebook like button. Conspiracy flow charts almost always fail the historical documentation test, but they are interesting in another way that is similar to gypsy storytelling. In the Gypsy-Romani culture, storytelling is a prized activity, but the purpose of such stories is not to illustrate any great truth or heroic character—rather it is their sheer elaboration of facts, motives, and disconnected details organized in such a way as to propose stories that demonstrate that there is no real story, only a momentary convergence of random shadows that seem to sound good when they are put together. Think Lady Murasaki’s 11th-century Tale of Genji, but without characters who are conflicted about the honorability of their actions.

And that is why Lombardi’s work is so brilliant. By locating his narrative constructs in the art world he was hiding them in plain sight, because he was guaranteed that they would have been assumed to be instances of gypsy storytelling simply because almost everything else in that world is exactly that. Also, in that world, no one pays any attention to any news that is not about themselves, making the purposes behind Lombardi’s work invisible to the immediate social environment surrounding it. But for those who may have paid close attention to the news of that day, the likely reaction would have been akin to Ira Levin’s Rosemary realizing that her congress with Satan was not merely a frightening dream (”This is really happening!”). In other words, the work points to documentable relationships between political and financial entities to illustrate the vast phenomena of interlocking directorates defined by John Scott in his 1990 trio of books The Sociology of Elites. These directorates have been slowly proliferating since the onset of the Bretton Woods Conference that inaugurated economic globalism in the summer of 1944. Once you understand how they work, there is no need to pursue any more speculative version of the conspiracy flow chart as anything other than fanciful graphic design.

Patricia Goldstone has just published an excellent biography of Mark Lombardi titled Interlock: Art, Conspiracy and the Shadow Worlds of Mark Lombardi. According to the book, Lombardi’s business card indicated himself to be a practitioner of “death defying acts of art and conspiracy.” The fact that he hung himself in is own studio in March of 2000 paid to the card’s motto, and Goldstone’s book takes a measured view of the claims made by some that Lombardi may have been the victim of government-sanctioned foul play. It certainly makes some disturbing facts clear: that agents of both the FBI and the CIA had taken a very special interest in Lombardi’s work during the months prior to his demise. 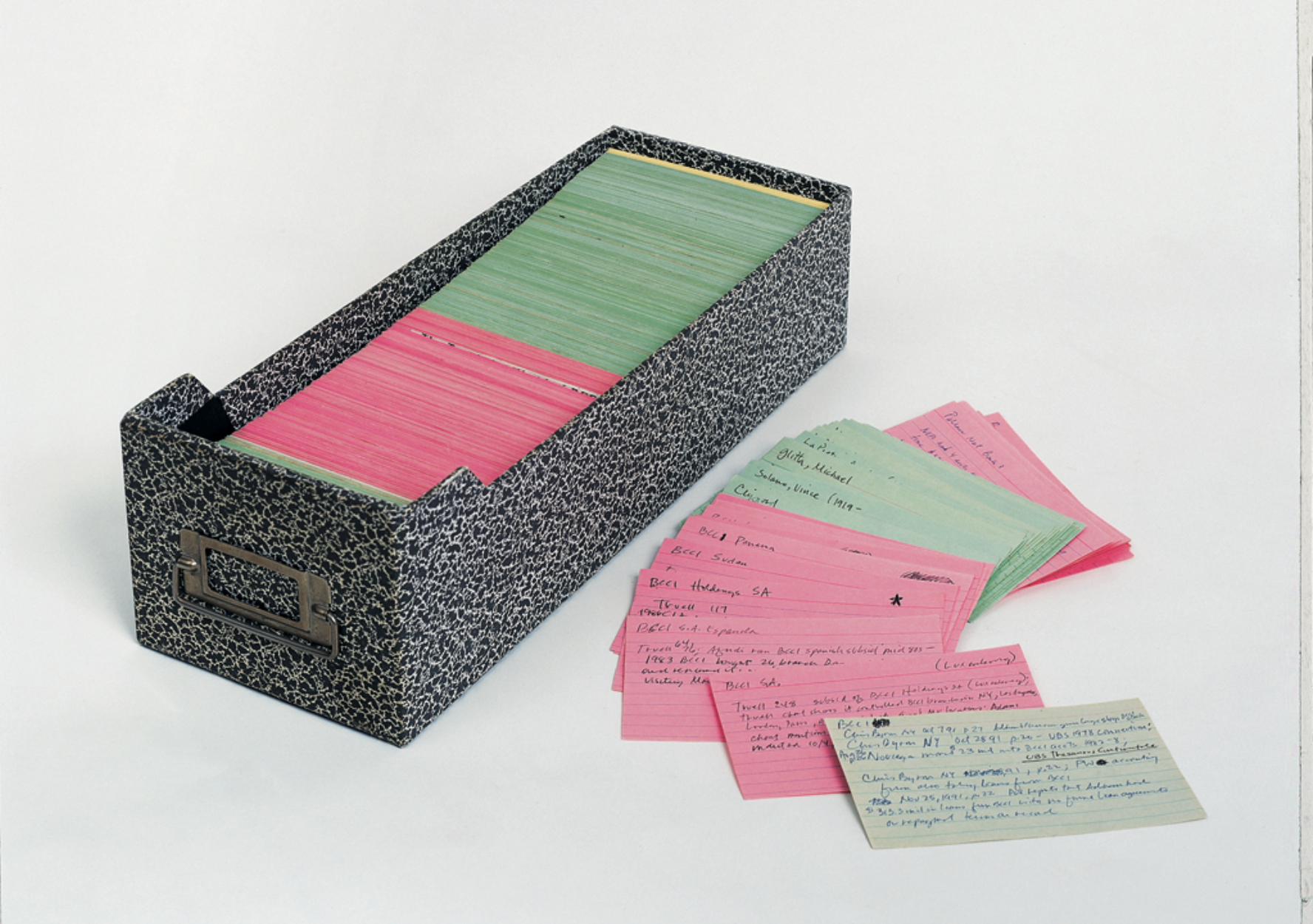 Mark Lombardi’s index cards, with notes from his research on the activities of individuals and groups implicated in the financial scandals he was investigating, 1998-2001. Photograph by John Berens. Courtesy of Donald Lombardi and Pierogi Gallery.

Goldstone’s book takes its title from the name of a standard forensic technique for making infographics that accounts for the convolutions and pathways of “hot” laundered money. It is interesting to note that when Lombardi was asked to describe his works, he called them “interlocks” rather than drawings or works on paper. His practice was driven by a passion for meticulous research, which sometimes went so far as to have Lombardi posing as a journalist to interview key players in some of the episodes referenced in his work. There is much consideration given to documents found in Lombardi’s “personal papers,” and his famously extensive card file of research topics is accorded some very special attention.

The book is divided into two parts, the first being an account of Lombardi’s life running from his early Kennedy-era childhood in a suburb of Syracuse, New York to the time of his suicide in his Williamsburg studio. It includes a variety of interesting narrative tidbits, including the fact that Lombardi’s father was an avid reader of John le Carré’s espionage fiction. We also learn of Lombardi’s early art historical research on 19th-century panorama painting as well as his role as an assistant curator in the staging of a Watergate-era exhibition titled Teapot Dome to Watergate, which was a visual history of American political corruption. During his student years at Syracuse University he worked with James Harithas, who was the director of the Everson Museum—a shadowy, myth-laden figure who later married into big-time money and much earlier was (in the early 1950s) stationed as a drafted soldier in Algeria. When Harithas left the Everson to work at the Houston Museum of Contemporary Art in 1974, Lombardi followed him southward and became a part of the burgeoning east Texas art scene that had grown up around the inflated oil revenues that were made possible by the OPEC oil embargo.

It was there that Lombardi made the acquaintance of Sissy Farenthold, who was a mover and shaker in the Texas Democratic party (back when Texas still had democrats), and at one point was the only female member of the Texas State Legislature. Farenthold ushered the young Lombardi into the social world of oil, money, and politics, placing him close enough so that he could see the players and understand something about the duplicitous games that they were playing—she herself having committed a kind of “political suicide” by seeking to pass anti-corruption legislation. No doubt this explains why the operations of the Bush family are such a recurring topic in Lombardi’s work. He had a ringside seat.

The second part of Goldstone’s book steps away from Lombardi’s life story in favor of exploring some of the organizational players that are referenced in the artist’s elaborated taxonomy of shell-game operators. If anything, this shows that Goldstone shares Lombardi’s passion for research, and in some cases she has completed parts of it that were left unfinished at the time of the artist’s death. One can only wonder what Lombardi’s work would have become had he lived through the 2nd Iraq War, the financial crisis of 2008, and the many other shady political controversies that are now a part of our everyday life. One also wonders why we see so few artists who are willing to take up the mantle of doing political art with the same level of subtlety and sophistication that Lombardi brought to his project.

Next post A selection of openings and current exhibitions, San Francisco and East Bay