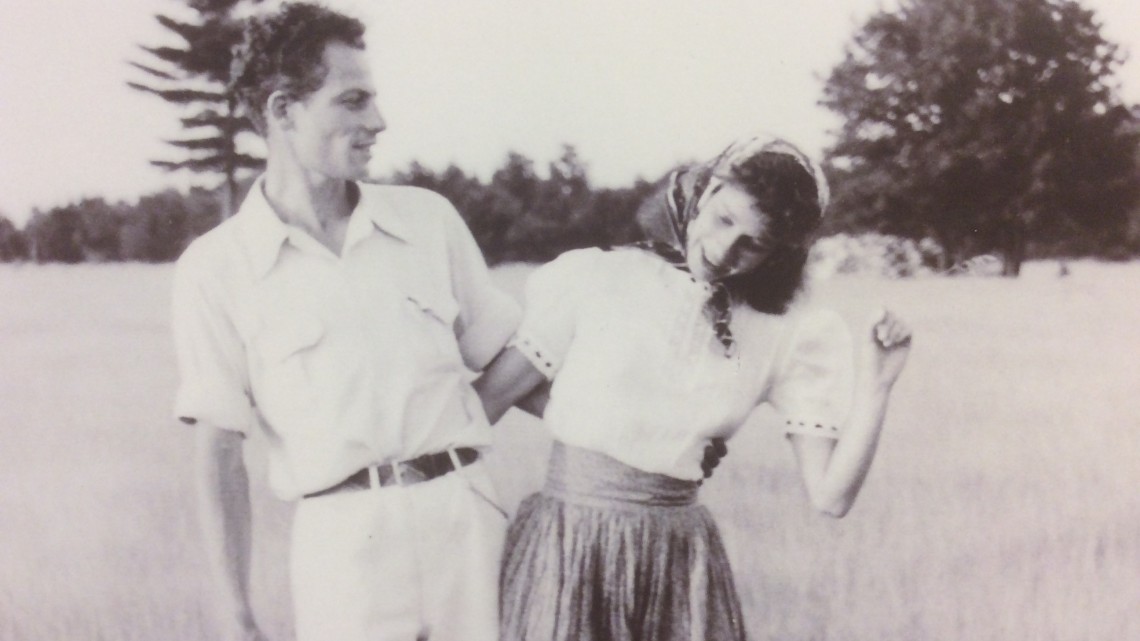 Lawrence and Anna Halprin. Courtesy of the California Historical Society

The finale of the television series, Mad Men, featured advertising executive Don Draper getting his consciousness raised at a fictional Esalen Institute in Big Sur, expressing his new found karma in the form of the Coca Cola jingle, “I’d Like to Teach the World to Sing (In Perfect Harmony).” Draper’s life-changing instruction at Esalen could have been guided by Anna Halprin, who taught then and continues to teach there to this day.

Who knows how many lives she’s changed over the years? Her husband Lawrence built her a dance deck at their Kentfield home, where she hosted dance workshops in the late 1950s with, among others, Trisha Brown, Yvonne Rainer, and Simone Forti, all of whom relocated to New York City and began putting Halprin’s instruction into practice at the Judson Memorial Church. That was the beginning of postmodern dance. During the same period, John Cage encouraged La Monte Young to get in touch with Anna, which he did, encouraging Terry Riley to join him, and together they provided the soundtrack to her event based movements. That was the beginning of Minimal Music. Young relocated to New York, meeting George Maciunas, with whom he shared Anna’s event-based scoring. That was the beginning of the Fluxus art movement. Personally, I don’t think it’s a stretch to call Anna Halprin the most important and influential artistic force in the Bay Area. Her global impact rarely gets reported locally, occurring as it does in international exhibition catalogs, foreign film production, and scholarly tomes, but it is a well-documented reality.

Her husband was no slouch either. He was a noted landscape architect, who studied with Walter Gropius at Harvard (in the same class as Philip Johnson and I. M. Pei). He went on to design sites at the Seattle World’s Fair (1958-1962); Sproul Plaza, University of California, Berkeley (1962); Yosemite Falls Approach at Yosemite National Park (2005); Sea Ranch (1965), the Franklin Delano Roosevelt Memorial in Washington, D. C. (1997); Ghirardelli Square (1968), United Nations Plaza (1975), the Market Street corridor (1970s), Stern Grove amphitheater (2005), and the Letterman Digital Arts Center (2005) in San Francisco; among other noteworthy projects. My personal favorite is his highway landscaping for I-280 (compare it to US-101, and you’ll see what I mean).

The exhibition at the California Historical Society, Experiments in Environment: The Halprin Workshops, 1966-1971, focuses on the collaborative works the couple fomented in the American cultural landscape during turbulent years of generational crises. It marks the 50th anniversary of the Halprins’ first workshop and the legendary Trips Festival, which Anna Halprin participated in (at age 45), offering her dance company as a prototype of creative collaboration to a curious yet bewildered assembling. Indeed, the couple was front and center during the heyday of the hippie era, bridging the generation gap by structuring exercises to allow all ages to achieve individual personal growth. More than a branch of the human potential movement, it was a healing art that paved the way toward new ways of thinking and thinking about art. In the Marin Independent Journal, Anthea Hartig, executive director of the California Historical Society, stated that, “We are living in the world they created.” (January 17, 2016) 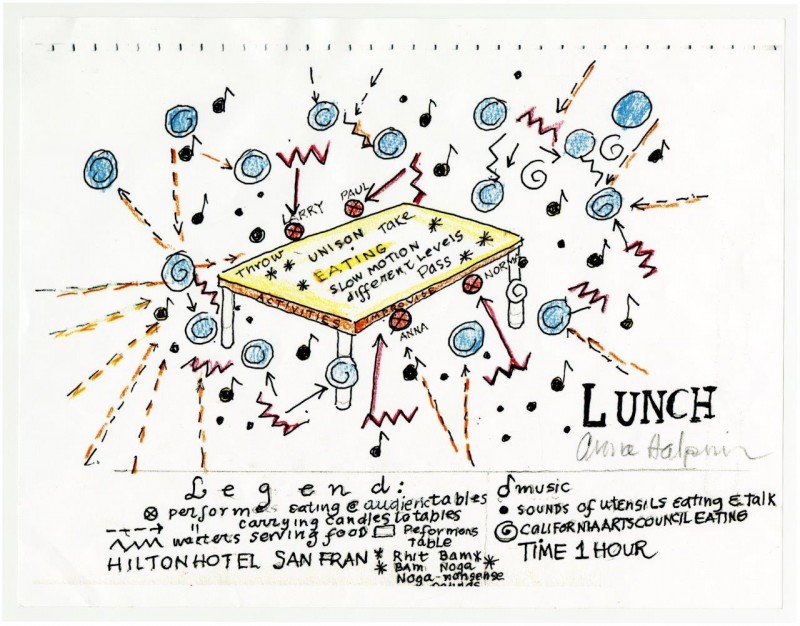 The exhibition brings together photographs, films, drawings, performance scores, landscape renderings and printed works. Rarely seen objects from the Halprins’ personal archives are also on display. The exhibition was organized by the Graham Foundation for Advanced Studies in the Fine Arts and the Architectural Archives of the University of Pennsylvania, which houses Lawrence’s archive.

The Halprin workshops were attended by dancers, architects, environmentalists, visual artists, psychologists, educators, graphic designers and composers. Their goal was developing a way for people to work together, especially in the heyday of the hippie, when there was an all-too-prevalent anything-goes attitude. The late ‘60s workshops were a testing ground for the R.S.V.P. Cycles that the Halprins developed over the next decades, codifying the lessons learnt at the workshops. This multi-disciplinary collaborative approach to creative group work, continued to serve the Halprins well over the years. 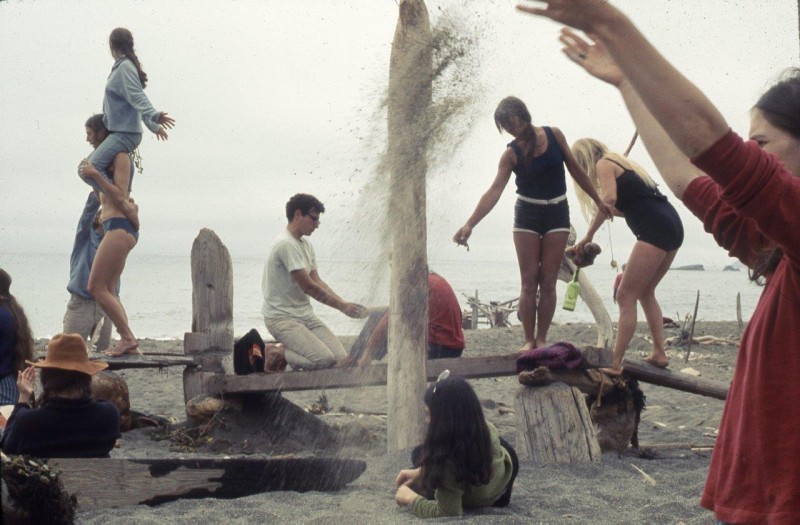 At 95, Anna continues to employ the lessons of the workshops in her teaching. She states in the California Historical Society press release that, “I am delighted that Experiments in the Environment will be coming to its home base in San Francisco, the home of radical, humanistic and participatory innovation. The exhibit excites me as well because it is including a new section describing my collaboration with Larry and our work beyond the Experiments. As Larry inspired me with his sensitivity to the environment, which influenced my experiments, I influenced him in my use of movement audience participation as I pioneered new forms in dance. This combined exhibition shows the impact we had on each other throughout our lives and I hope it helps people understand our work better.” 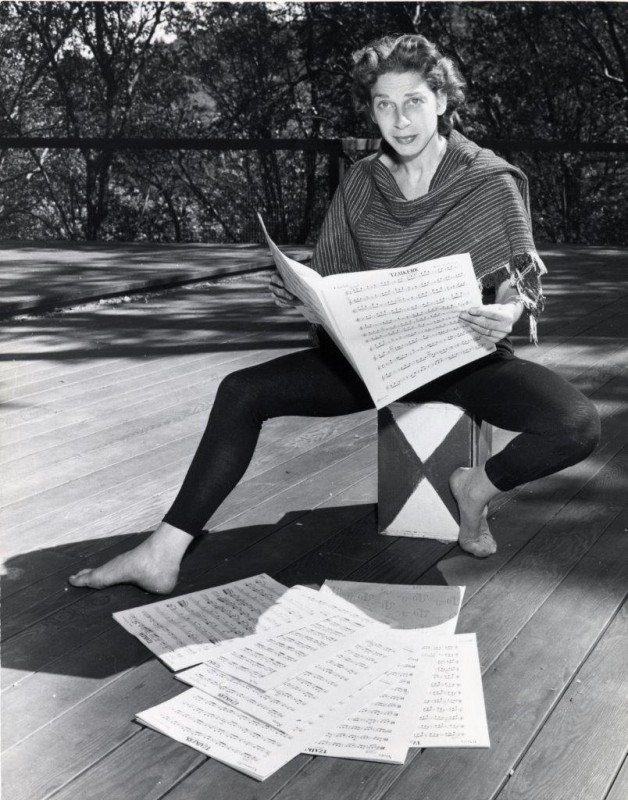 Anna Halprin on Dance Deck. Milton Halberstadt, photographer. Circa 1940s-1950s. Reproduced from a gelatin silver print, Courtesy of the Museum of Performance + Design.

Anna Halprin has danced on Broadway, courted arrest with her provocative Parades & Changes, stimulated style and substance during the halcyon years of the hippie revolution, overcame cancer and embraced a healing art, provided cultural opportunities for the young, old and disabled, and continues to evoke inspiration through the Tamalpa Institute, which she co-founded with her daughter Daria in 1978. Since Lawrence’s death in 2009, Anna helps to perpetuate his memory, and expands their joint vision of developing a fully integrated person living in a healing world.

The opening of the exhibition, with personal remarks by Anna Halprin, was floor-to-rafters with admirers and the curious alike, the lines to get in stretching down the block. Kudos to the California Historical Society for recognizing the Halprins’ unique importance in knitting together the cultural, social and historical fabric of the Bay Area. It is a well-organized exhibition, lovingly prepared by fine art and special collection experts. Personal papers of the Halprins are given context by a wealth of archival materials, offering insights into the era in which they were generated. 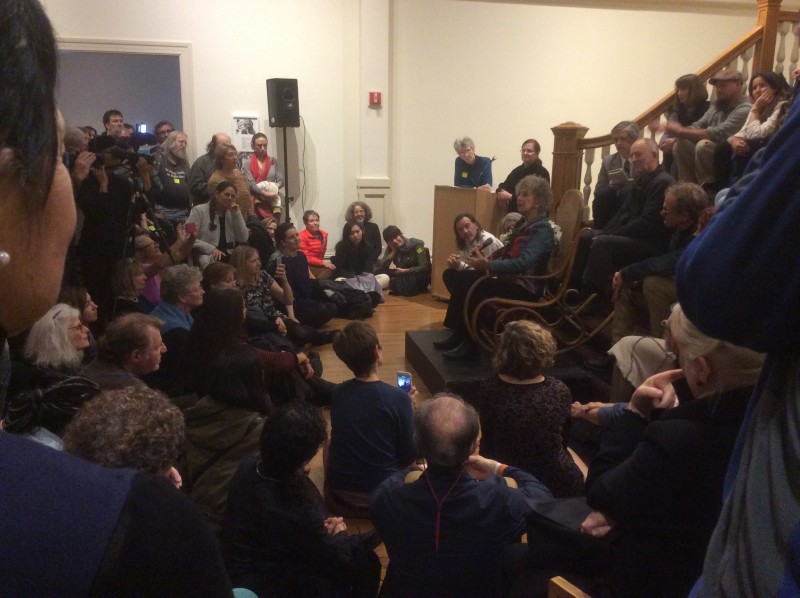 Next post Do More of What You Love: Susan O'Malley