Do More of What You Love: Susan O’Malley 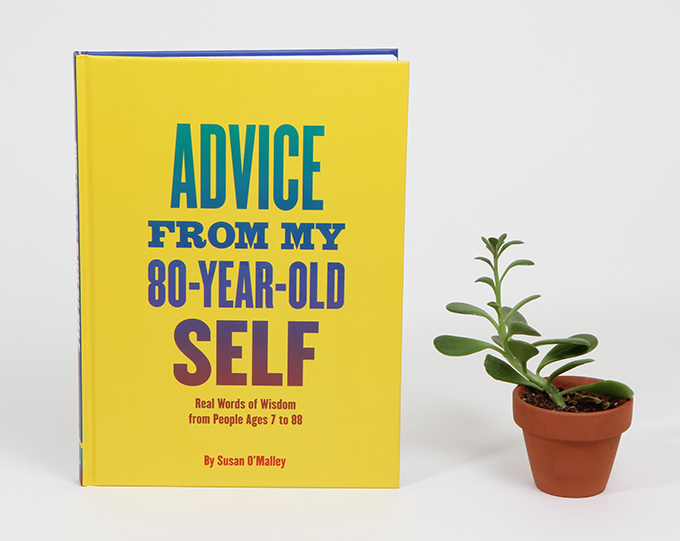 Susan O'Malley, Advice From My 80-Year-Old-Self: Real Words of Wisdom from People Ages 7 to 88, 2015. Courtesy of the estate of Susan O'Malley and Chronicle Books.

The space between public and private is perhaps shrinking—and at a much too rapid pace for comfort. Susan O’Malley managed to insert her poignant work in every avenue of the public imaginable, from front lawns, to billboards, to garden walks as well as galleries and museums. In our discomfort with the rush of technology, the time lost in trying to be too many places at once, perhaps even questioning our existence, O’Malley created a much needed pause. Her work was a respite from the rush and a way to rethink how we navigate the world. Feelings were never put aside; rather, they were put forward as markers for why we are here.

Her incredibly tragic and sudden death in February, 2015 sent a wave of sadness and disbelief to those who were close to her, and those who were familiar with her work. The latter, I being one of them, was struck with loss for her future creations and the missed opportunity to know her. There was so much more I wanted to see from her, so much to support and to watch grow over time . . . now that opportunity was gone for both of us. Thankfully, her legacy has continued through the generosity of curators, friends and representatives that believe in showing her work. Her poetic and all too candid messages continue to impart a sense of belonging despite her absence. 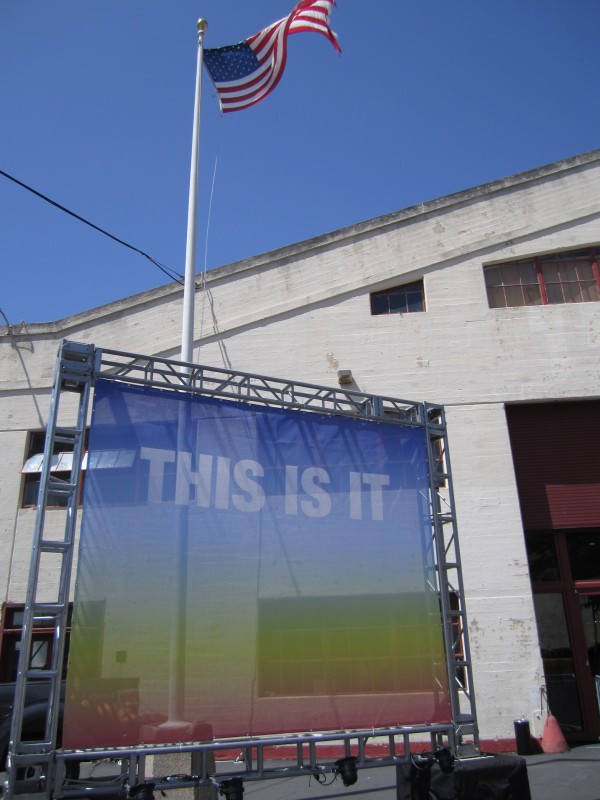 Susan O’Malley, This is It, installation at artMRKT San Francisco, 2014. Photo: LLutz.

I first became familiar with O’Malley’s Mantras and her Community Advice projects after seeing her work at artMRKT San Francisco in 2014, where her bold, huge banner and public statement THIS IS IT, was installed at the entrance of the fair. The message now resonates doubly, as if to say, “What is being done is what should be done,” and in retrospect a poignant foreshadowed good-bye. Since that time, she had participated in other public works, such as the Mantras for the Urban Dweller (Moment to Moment) project (2013) curated by The Thing Quarterly. The project took on the form of a “magazine in real time,” meaning texts were placed in public places, specifically BART stations in San Francisco and Tube stations in London, for example. Taking on the guise of “public service announcements,” people could engage with the work during their everyday commutes. As O’Malley eloquently wrote in the project statement: “The texts open the possibility of a flash of introspection in the hamster-wheel of life; and I’d like to think that the words can be repeated, chanted, spoken, howled, whispered, or interpreted. In these works I’m suggesting my wish for how things could be: if we paid closer attention to our being, to our grieving, to the way the sun makes a spectacular reflection on the buildings at that certain time of the day.” In this way, O’Malley summons individuals to take stock in their surroundings and then to reflect on how their world is impacted and can change. 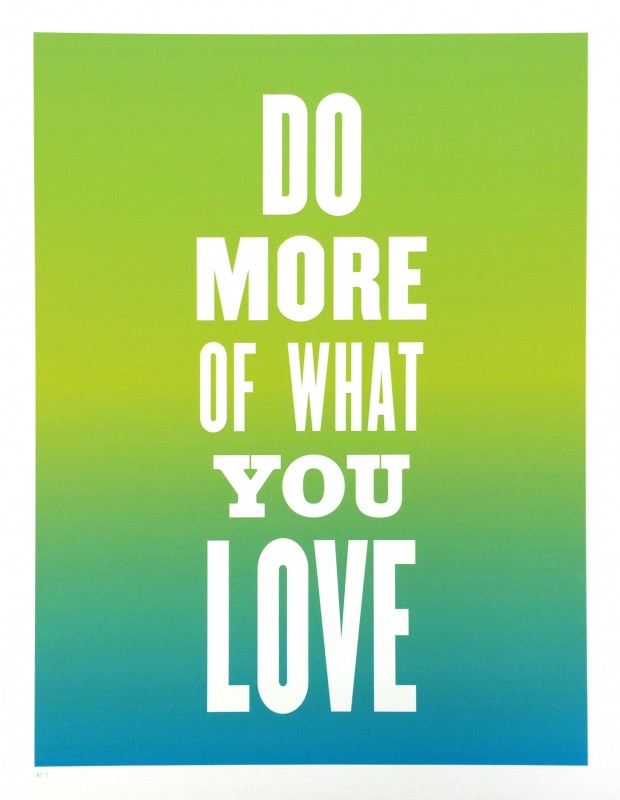 Currently on view at the newly renovated and reopened San Francisco Arts Commission Galleries is Do More of What You Love, a small survey of O’Malley’s work featuring video, photo documentation, and a selection of posters. The exhibition coincides with a book Advice From My 80-Year-Old-Self: Real Words of Wisdom from People Ages 7 to 88, which was launched by Chronicle Books in January, 2016. The content for the book began with a similar project in 2012 called Community Advice, for the Palo Alto Art Center. For the project she interviewed almost 100 people by asking them, “What advice would you give your 8-year-old self? What advice would you give your 80-year-old self?” She made eight letterpress wood block posters that hung in the community and the Art Center Gallery. Just before her death she had worked with Chronicle to produce a glossy full-color book featuring over 65 pages of sage advice from the people she interviewed. For the introduction of Advice for… O’Malley wrote, “I started this project because I needed to listen to my 80 year old self.” For her, that future person is someone who can look back to the present and reassure us, encourage us, or guide us. 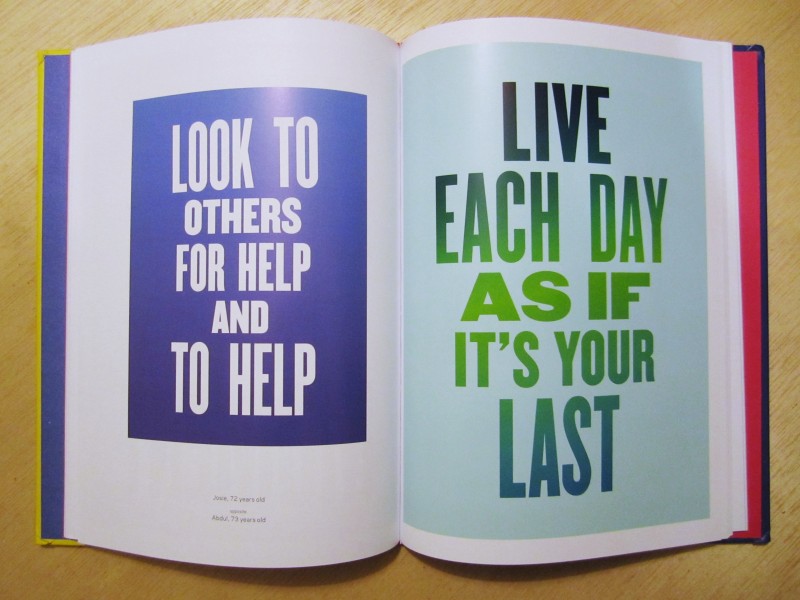 Susan O’Malley, Advice From My 80-Year-Old-Self: Real Words of Wisdom from People Ages 7 to 88, 2016. Photo: LLutz. Courtesy of the estate of Susan O’Malley and Chronicle Books.

Page after page, the words jump out and resonate, putting language to feeling and memories. Some have authoritative voices offering rules to live by, while others offer empathetic suggestions “I Told You So”; “Practice Compassion”; “Art Before Dishes.” Each page is vividly printed with simple fonts and contrasting or analogous solid backgrounds or full bleed, with brightly gradated backgrounds. One in particular reads “It is Possible” by Julian, 56 years old; super bold white letters leap away from a field that is almost reminiscent of a Mark Rothko painting—cobalt blue at the top of the page fades to violet to pale magenta to soft red at the bottom. 24-year-old Rachel says, “It Gets Easier,” presented in convincing black with a solid deep yellow background. Each phrase is designed with individualized colors—no two are alike, a reflection of the individual voices that contributed to the project. “It’s easy to forget how wise we can be,” O’Malley wrote in the book’s introduction. “We race through our hyperactive lives, so busy with the details of day-to-day living that we end up feeling disconnected from ourselves and each other.” It’s the kind of book that can be picked up at any time, and leafed through for encouragement or just to feel less alone.

In addition to the survey and the book launch, 18 phrases from the book are on view along Market Street bus kiosks in conjunction with the SF Arts Commission Public Art program. I photographed a few of them as I walked along the street, thinking about the texts. Like words from propaganda in a dystopian science fiction novel, the cheerfulness almost seemed unreal next to reality nearby: children whimpering at their mothers’ breast, a homeless person sitting on a pile of bulging suitcases, a dapper elderly man waiting for the bus. I become more self-conscious. Susan O’Malley had a lot to say. More importantly, she looked to the outside as much as inward, gathering around her a collective voice. Her work resonates with the optimism that imbued her practice, and we are lucky to continue to experience it, to pause.

SF Arts Commission Book Launch and public exhibition on February 10, 2016. O’Malley’s work will be on view until May 7.

Partial proceeds from the book will be donated to the Susan O’Malley Memorial Fund for the Arts.