Scale, Density, and Will: The Making of a New Museum of Art in Berkeley

I liked the old Berkeley Art Museum building. It became a reality after painter Hans Hoffman, who first taught at the University of California, Berkeley in the summer of 1930, donated 45 paintings and $250,000 towards its construction. A competition was held in 1964 to construct the building, and the museum opened in 1970 with a design by Mario Ciampi. It was a sprawling angular affair with vaulted ceilings, which was probably better suited as a subject of photography than for presenting the Museum’s artworks. A 1997 inspection revealed that the 101,000 square foot reinforced steel structure did not meet seismic standards. Bracing was added in 2001, raising the safety rating from “very poor” to “poor.” Obviously, something had to be done.

Living without a car in San Francisco and having to slog up Bancroft Avenue from the Downtown Berkeley BART station to get the Museum was a necessary evil. So, for purely personal reasons, I’m glad the old UC Berkeley Art Museum and Pacific Film Archive was not torn down and replaced. The new Museum is now conveniently located one block from BART at Center and Oxford Streets on the site of the former UC Berkeley printing plant, right across the street from campus. 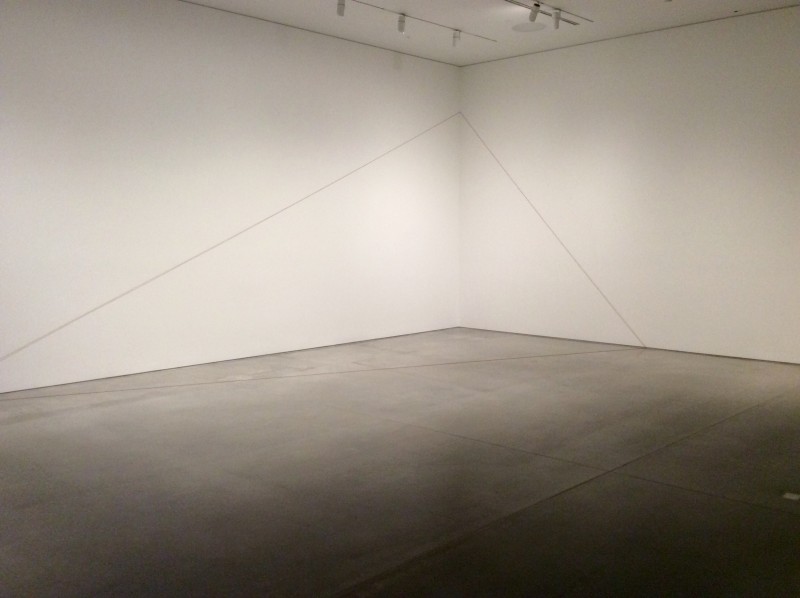 Designed by Diller Scofidio + Renfro, the new Museum drew upon the printing plant’s Art Deco framework, salvaging the salient points of the old building and wrapping it in a contemporary frame. Can you say postmodern? This is a perfect example—drawing from the past and making it new. Lead architect Charles Renfro states, “The sculptural form of the theater volume reinterprets the 1930s Art Deco style of the press building in a contemporary language of ruled surfaces and precision-formed stainless steel.”

The building totals 83,000 square feet, with 25,000 feet of gallery space, two film theaters, a performance space, four study centers, a reading room, a hands-on art making lab, a café, and an outdoor LED screen. Although the new museum has less square gallery footage then previously, it seems larger. Like the Ciampi-designed building, the galleries sprawl, but they have individual feels, while the older building’s galleries seemed cookie cutter. The new environ will serve future exhibitions well. While some of the galleries are suited for large-scale contemporary paintings and sculpture, others are intimate, suitable for reflection upon more subtle works of art.

It’s not surprising the building works so well. Diller Scofidio + Renfro has an enviable track record, having designed and constructed Boston’s Institute for Contemporary Art, the recently opened Broad Museum in Los Angeles, and the much beloved and deservedly admired High Line elevated park in New York. Charles Renfro, also declares, “The new home for BAMPFA leverages its location between downtown Berkeley and the UC campus by providing unprecedented visual and physical access to its programs for both visitors and casual passersby. BAMPFA will become a new social and cultural hub for the entire region.”

The visitor to the Museum is immediately struck upon entrance by an expansive performance and lecture space featuring platform seating by master woodworker Paul Discoe, who has fabricated joinery elements salvaged from the Canary Island pine trees that occupied the site previous to construction. Artist Barry McGee has designed cushions for the space—a nice touch by the curatorial staff, sensitive to the unique creativity native to the region. Another unique feature of the space is a monumental wall, upon which site-specific works can be produced. For the opening, Chinese artist Qui Zhijie has drawn a tour-de-force “literati garden,” which must be seen in-situ to be fully appreciated.

The galleries are expansive and so is the opening show. With over 250 works in the Museum’s opening exhibition, Architecture of Life, BAMPFA Director Lawrence Rinder has curated broadly on the art and metaphor of architecture. The exhibition is a logical choice, as Rinder has been up to his eyeballs in architectural details for the past several years. The old museum was a worthy structure, and sadly missed by some, but the new venue is all that and more. 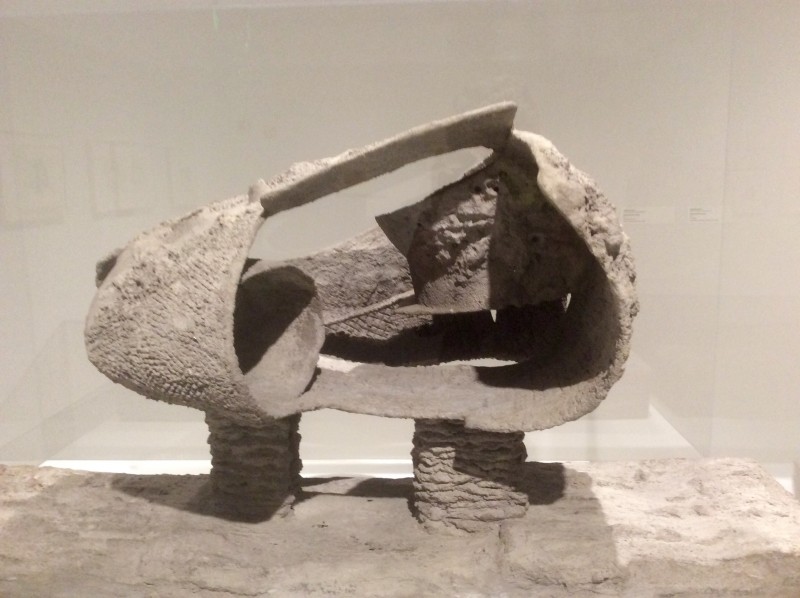 Rinder was formerly a curator at the Whitney Museum of American Art and organized the 2002 Whitney Biennial, so he’s no slouch when it comes to formulating exhibitions. Performing this on top of opening a new building must have been a daunting challenge. It’s a big show that takes up all of the available gallery space. It would have been easy to simply draw from the institution’s collection, showcasing selected works acquired over the years. Instead, Rinder has challenged himself by adding works from private collections, other museums, recent acquisitions, and specially commissioned works. 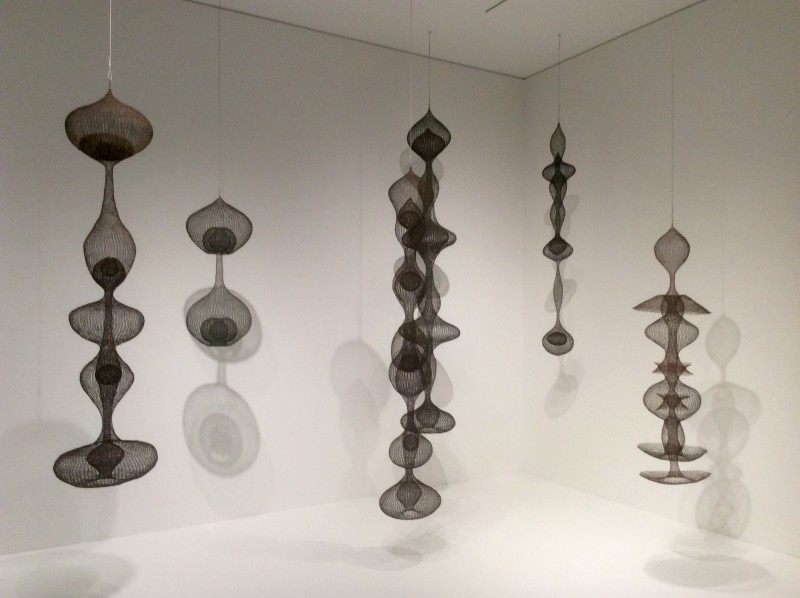 Standouts in each category include a bevy of Ruth Asawa hanging brass baskets drawn from private collections, including a very early 1953 example from the collection of Deborah and Andy Rappaport of San Francisco. Rinder has ventured abroad to bring two outstanding works by innovative architect Frederick Kiesler to light: his, Model of Endless House, from the collection of Gertraud and Dieter Bogner, Vienna, Austria, and Study for Endless House, on loan from the Frederick and Lillian Kiesler Private Foundation, also in Vienna.

One of my favorite paintings of all time, Stephen Kaltenbach’s massive, Portrait of My Father, is on loan from the Crocker Art Museum, Sacramento. Painted over a period of eight years (1972-1979), the work is a marvel of painstaking details. With a physical presence like Mt. Shasta, it creates its own architecture through scale, density, and will. 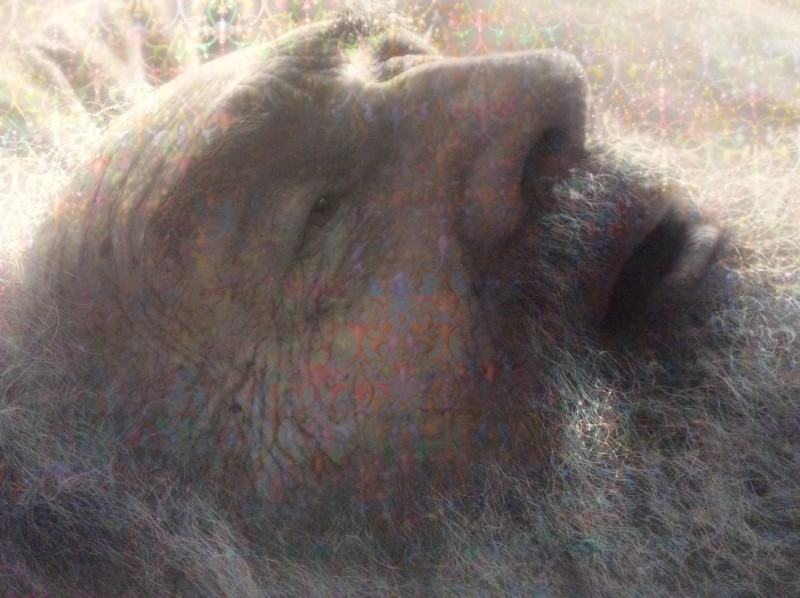 Dieter Roth’s, At Home (1970), is a recently acquired gift from the late San Francisco art dealer Steven Leiber, in whose honor the Museum has named the Conceptual Art Study Center. The museum is slated to reveal a fuller extent of Lieber’s collection in the Fall of 2016.

Chinese artist, Qui Zhijie, is the first artist to work on the Museum’s 60 x 25 foot interior Art Wall, which is intended to highlight temporary commissioned works. His, The World Garden (2016), is the first artwork one encounters when entering the building, and the artist has set a high standard for future commissions. Normally known for his work in video, photography and performance, his depiction of the world as a garden is produced by ink and brush, enlarging the traditional range of scroll painting. In the Art Wall press release, Rinder states that, “Not only does it resonate with contemporary themes of relevance to our campus and community, but it also echoes many dimensions of our opening exhibition, Architecture of Life, which explores architecture as a metaphor with which to illuminate diverse aspects of life experience.” 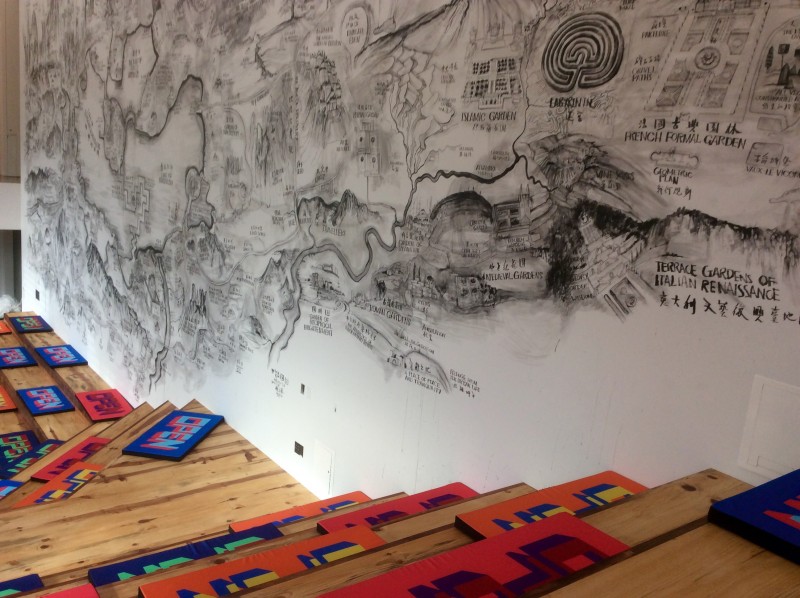 Diversity is a hallmark of the inaugural exhibition ranging from contemporary works such as SFAI graduate Chris Johanson’s Cityscape with House & Gray Energy, painted in 2003; a classic conceptual work, Boite (1966), by Marcel Duchamp; to a gilt bronze 14th century Tibetan masterwork, Seated Buddha. The variety of the art on display is what sets this exhibition apart, equaling the multiple uses of the site itself.

There are four study centers: the Film Library and Study Center, the Florence Helzel Works on Paper Study Center, the James Cahill Asian Art Study Center, and the Steven Leiber Conceptual Art Study Center. At the time of the opening, only the film library is functioning, with the others coming into operation in due course. There are two film theaters (one with 33 seats, another with 232 seats), an art lab “designed for creative, hands-on art projects of all ages with a focus on drawing, collage, prints, and books,“ a café, gift shop and the Koret Reading Room. 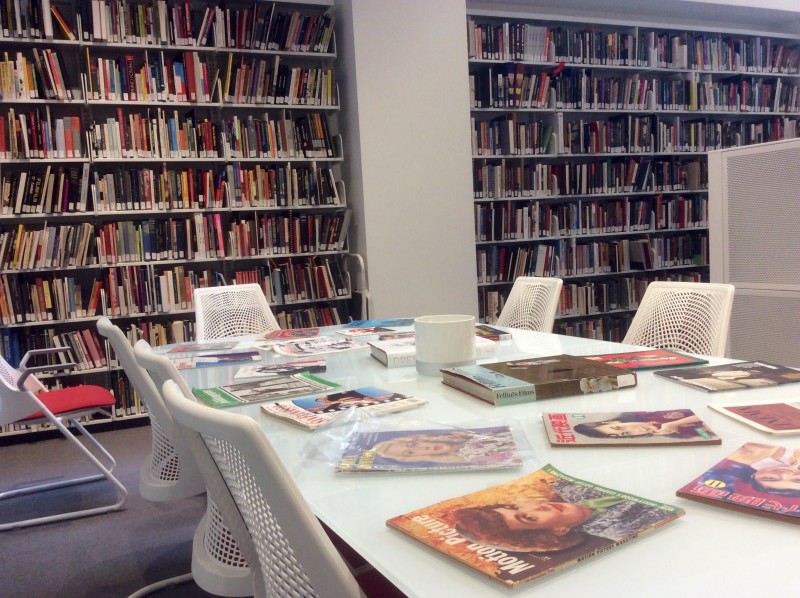 I’ll be making many a BART stop at the Downtown Berkeley station now that BAMPFA has conveniently relocated. I encourage you to find out firsthand what all the excitement is about. 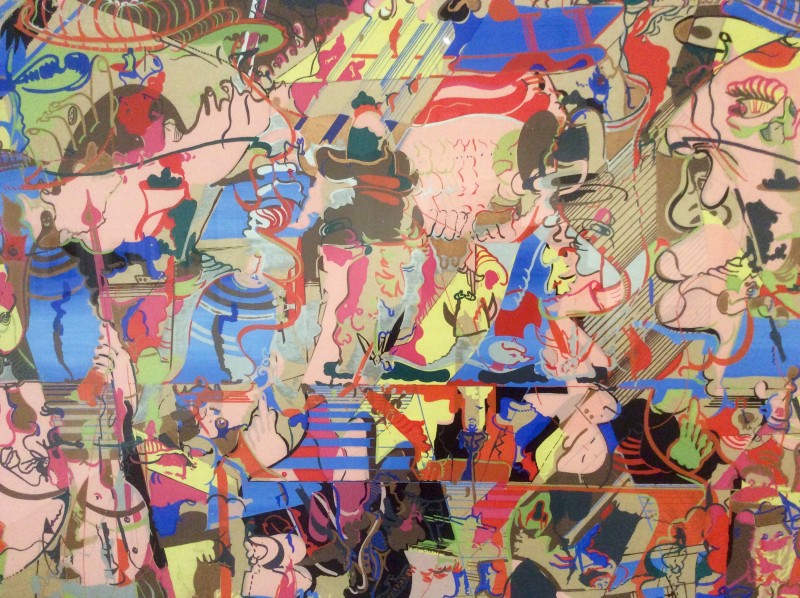 Previous post All that Glitters at the Track: Sadie Barnette’s Superfecta