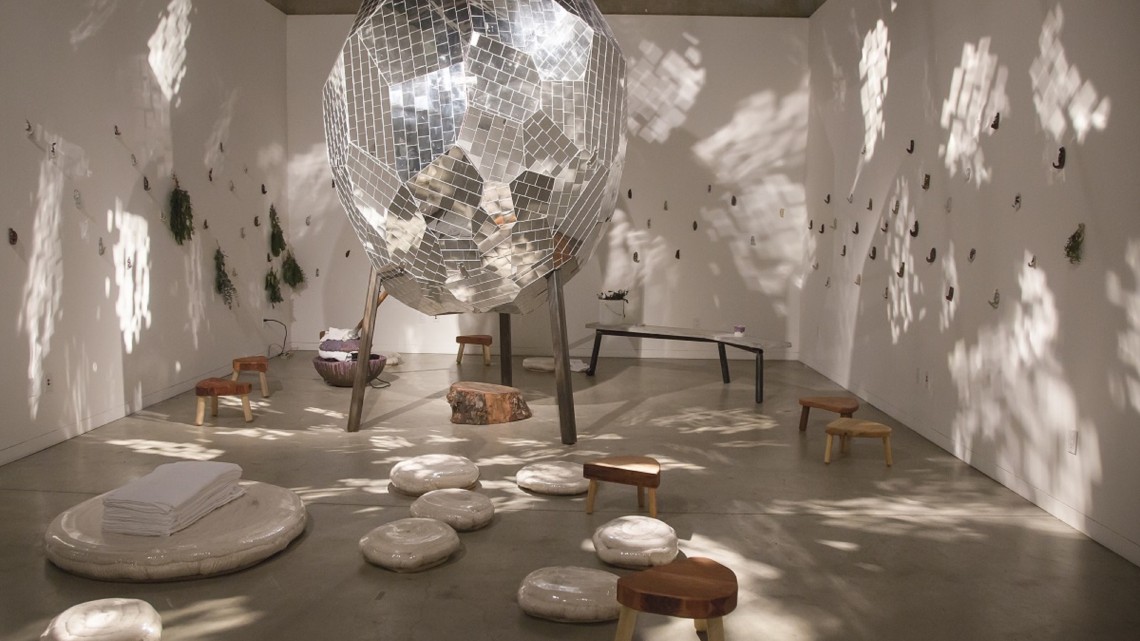 As night falls, the lights are dim and serene inside the Southern Exposure gallery. Passers-by stop on the sidewalk and peer through the large plate glass windows where several people are milling about in bathrobes, bathing suits, or wrapped in towels. Inside, the mood is jovial, as people mingle and chat with each other. Some sit, while others dowse themselves in cool water running from large four-foot-diameter purple glazed vessels, in which, at other times, people crouched inside to soak. Water splashes all over a raised wooden platform and onto the floor. Upon entering, the room is warm and damp and the air is filled with earthy and green aromas. This is Michael Parker’s Steam Work, which, currently on view at Southern Exposure, is more of a communal gathering than it is an art exhibition.

The show, Steam Work is an elaborate yet playful installation that invites people to take a sauna, visit with friends, meditate, get hot, cool off, play music or just plain relax. On February 20th, when I visited the installation, Parker’s collaborator Wesley Hicks was on hand, manning the heat controls and dispensing essential oils for aromatic effect. Various scents were used to impart different atmospheric moods for the sauna participants, including melon, bergamot (a pungent orange), and vetiver derived from India, which is related to the Sorghum grass family but smells like lemongrass. The sauna, titled Steam Egg 2, is a large egg-shaped structure covered in mirrors, reaching over nine feet tall. Parker’s sauna takes its cue from indigenous American sweat lodges that are made of stone or clay. Seven people at a time can fit, sitting closely together. This makes for a very intimate experience, but no one seemed to mind; one after the other, people climbed into the egg to sit and sweat together, some strangers, some friends all in good spirits. Steam Work differs from a participatory art piece because, in this case, all of the elements are already in place and the visitors are not authors in its making. Instead, it is more like a place-setting for a theatrical performance in which the visitors are the actors, navigating through a script of objects that are placed before them to recite. 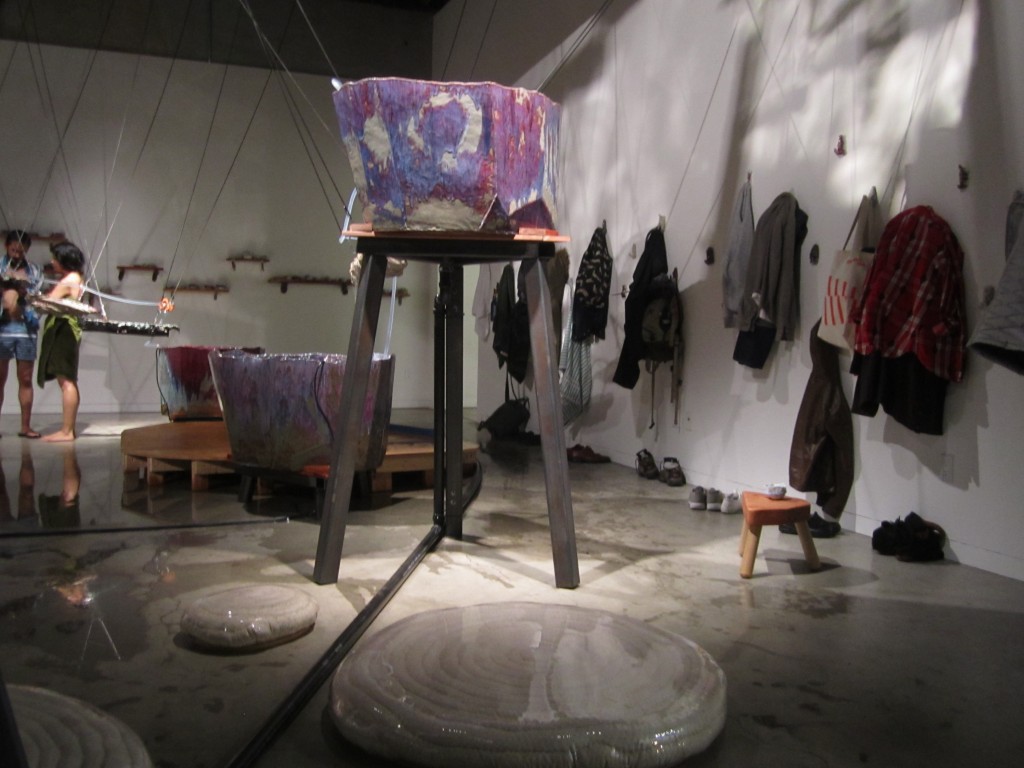 The entire room looks like a cross between Marc Caro and Jean-Pierre Jeunet’s 1995 science fantasy film City of Lost Children and a water feature one would see at the Esalen Institute in Big Sur. Though eclectic, it feels like a symbiosis of utopia and dystopia, with the use of both industrial and rustic materials. Occupying most of the space is a complex viaduct system titled Endless Column, which carries water from one large vessel to the next. Plastic tubes attached with industrial clamps run along a train of organic ceramic vessels cascading from the highest water tower to the lower vessels below. Along the walls are Bottle Racks (hooks) for towels and clothing, and Hydration Stations with shelves that hold one-of-a-kind hand-made ceramic cups for drinking water. People could rest on Wet and Messy cushions, or on chunky wooden stools scattered throughout. The soothing sound of rippling water is a back drop for the low cheerful chatter around the room. 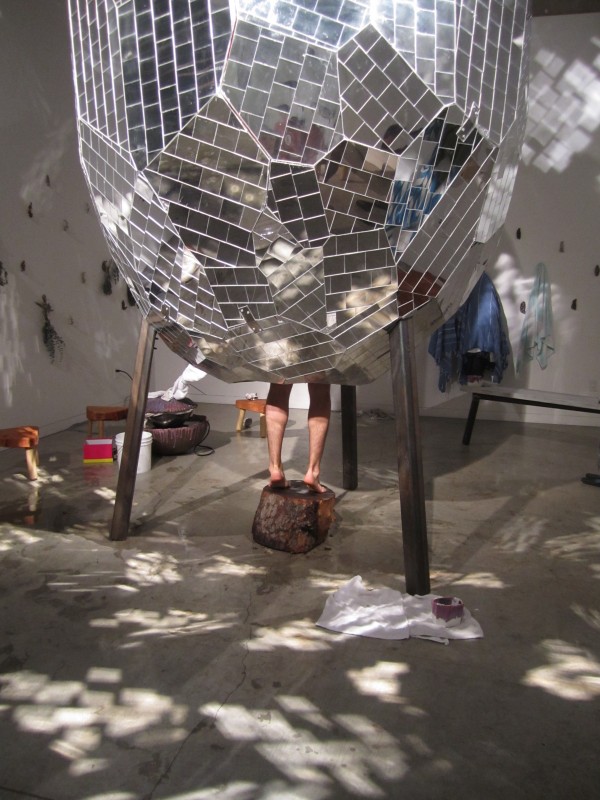 Other sounds emanate from someone occasionally playing one of the 30 ceramic conch-shell shaped Juicerinas that are offered. Juicerinas are a rendition of the traditional flute instrument called an ocarina. Ocarinas date as far back as 12,000 years ago and are found in the history of many cultures, from Asia including Japan and China, to Mesoamerica, particularly Peru and Mexico. Parker has made his own version that includes only two holes, so that anyone can easily play them by blowing in one hole and covering the other with their hand. Several poetic, instructional scores were created by Michael Parker and/or Wesley Hicks. “A Permeable wall of sound” instructs: all notes are to be slow and smooth for any number of players; players will play long and continuous notes and so on. Others are more complicated, instructing call and response amongst 15 people. 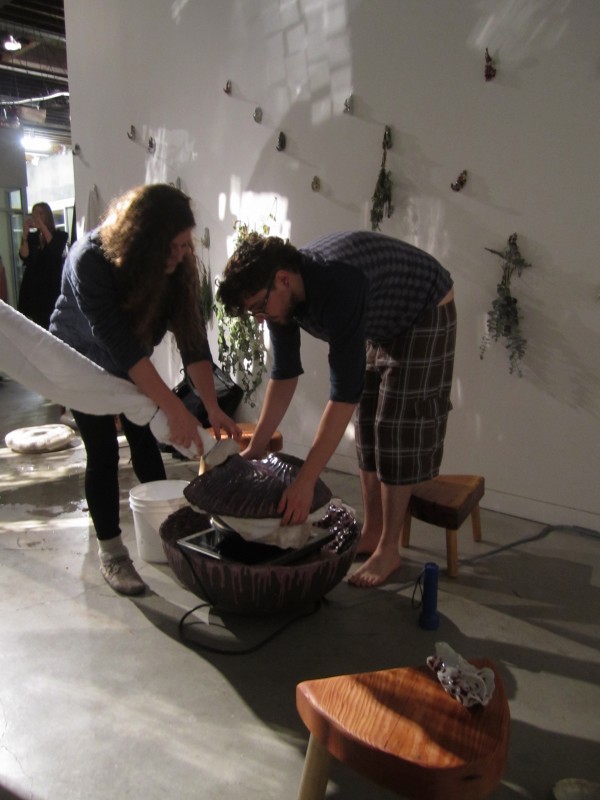 Michael Parker’s Steam Work installation offers a welcome and engaging respite from the urban sprawl. The open view of SOEX allows for a kind of voyeuristic transparency, which no one who was participating seemed to mind. People are there not just to sauna, but to be a part of an active and ever-changing art installation, and this perhaps opens up their willingness to participate. People are as uninhibited as they would be at the beach or a public spa. In a way, it is like watching a performance of the everyday ways in which art can intersect life, where everyone could just be themselves.