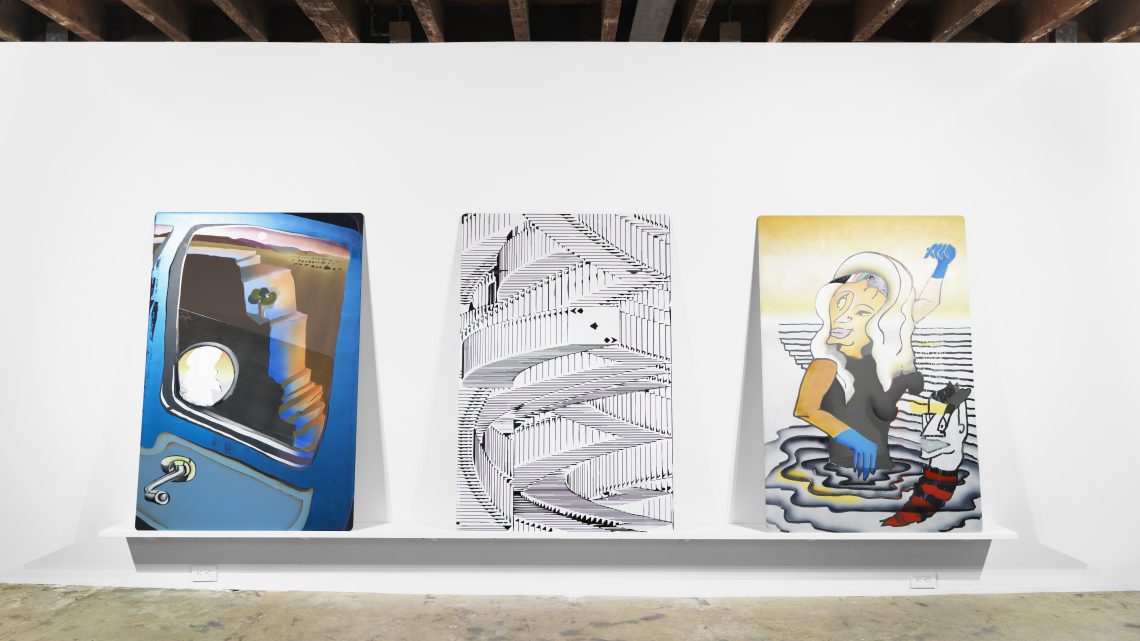 Any card. Or so the saying goes, but this is not what we are given in Past Present Future, Melissa Brown’s solo installation at Magenta Plains. Card-shaped, but overly-large, the Queen of Hearts’ palace guards come to life; three double-sided paintings confront us like a hand to be played. Wrong suit, though, and also the wrong game; this is Tarot and the trick is over, the card is already shown. In acrylic, oil, and resin, Melissa Brown divines the past, present, and future. She has something of an unfair advantage though; as we are told in the press release, the narrative that she reads is her own. 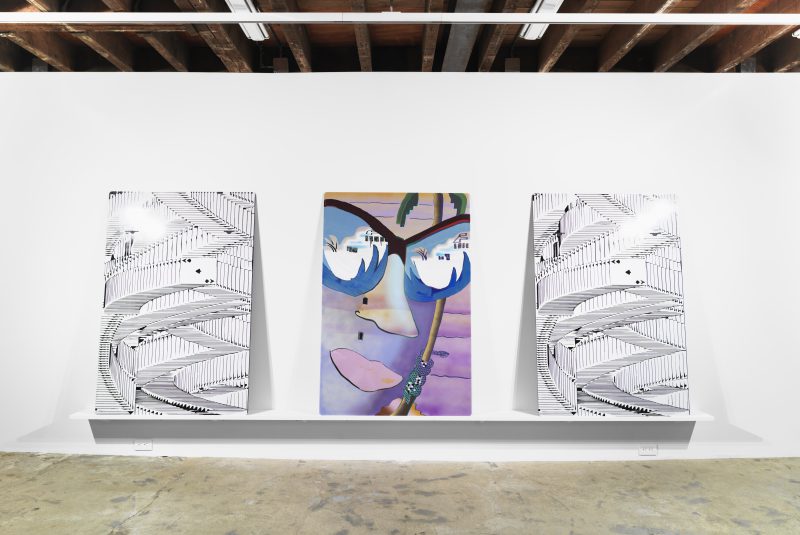 In identical monochromatic prints, a black-and-white ace of spades is iterated ad infinitum to fill the aluminum surfaces with chronicles of the image’s movement in a pointed allusion to the ‘win-screen’ of early Windows solitaire. As with playing cards, Brown’s paintings have two faces: the dull, pixelated stream of playing cards and colorful complements that collectively weave a disjointed narrative sequence that reads from left to right in a triptych. Each painting is double-sided and periodically flipped to reveal an ever-changing arrangement in the installation. Only a fragment of this chronology is ever visible to the viewer, pairing Past and Future, leaving Present to its own devices. This performative unveiling and obscuring furthers a quality of strategy and play while also communicating an uncertain temporality. Is only the Present known? Or today will we be able to look into the Future and Past? Let us cheat the system to look into all three. 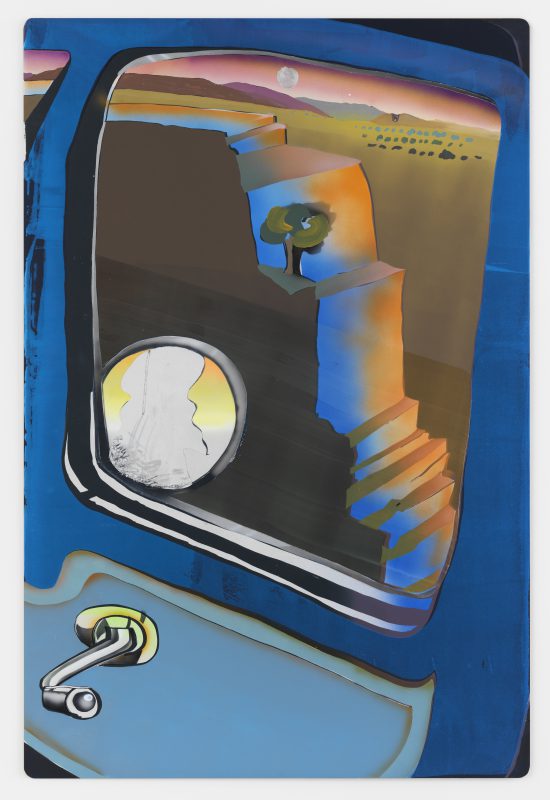 On the leftmost of the trio, the past made present, the black-and-white pattern turns to reveal the nostalgic twilight of The Ridge (all works 2016). In opposition to the wall of aces, it presents is a spectacular vista viewed from the blue interior of an old-fashioned car. Through a half-lowered window marked by a sheen of resin, a landscape sprawls to the feet of the moon and a gold-touched river steps its way through the plain. Cut in angular strokes, it is impossible to tell whether this snake of water lies flat or soars above the ground like a staircase. In the sideview mirror, a vague, voluptuous silhouette is visible against an oddly familiar yellow-orange horizon.

On the far right, also turned away, the future plays The Fool as a curvaceous form that stands waist-deep in pearly, silver water. With Mickey Mouse boobs and a right eye turned unsettlingly on its side, this woman turns to gaze into the past, gesturing with a blue-gloved hand over her shoulder. Perhaps she looks back at the mirror in The Ridge, which seems catch a glimpse of the liquid expanse that lies ahead. Does the future come before or after the past or the present? Is time a river that flows into a composite sea? 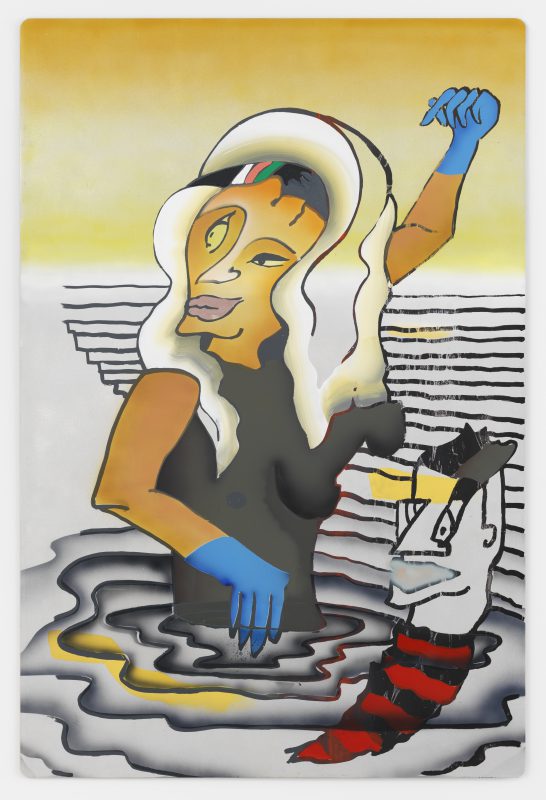 Between the past Ridge and the future Fool, a blue and purple face confronts us from a disconcertingly shallow distance, sunglasses spanning the width of the aluminum. All Hands On Deck, the work that, in sequence, corresponds to Brown’s present, is an ambiguous union of scales, materialities, and forms. A palm tree marks the border between face and background, although no shift in color corroborates the distinction, and the trunk actually emerges in the middle of what should be this individual’s forehead. Shiny, resin-washed lenses rimmed with ocean waves offer competing narratives of cruise life; in spite of two sets of antennas on two bows. The doubled images reflected in these frames are not perfect and these apertures reveal worlds at odds. In the lower windows of the left lens, a figure performs an Extended Side Angle while in the right lens, a figure sits in shadowy profile. Which of these reflections is the reality? Or can they both be true in the logic of the painting, moments caught in sequence by this figure’s gaze? 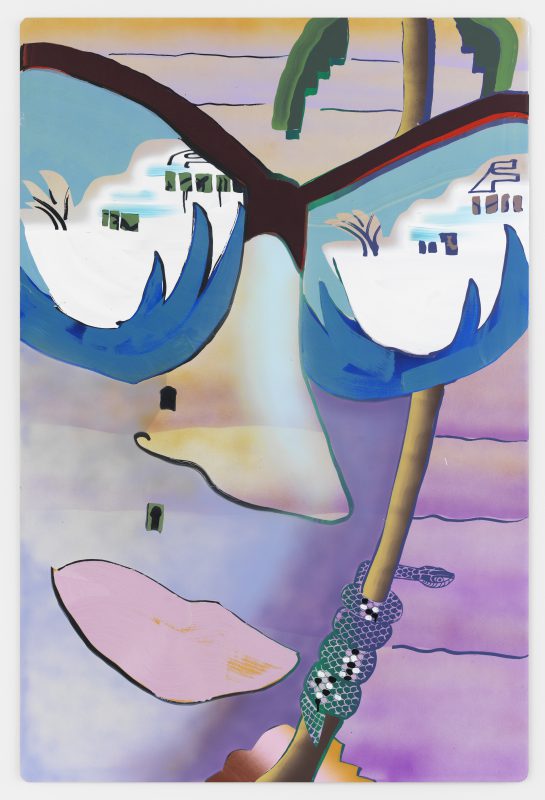 Drawing on imagistic twinning and literal screen printing to produce eerie correspondences, Brown’s paintings explore the strange borderland between reflected and real, remembered and foretold, repetitive and unique. Brown brings us moments in which our world offers alternatives or substitutes, catching the bizarre collapse of the real in reflections in sunglasses, car windows, and mirrors. By turns engaging and upending the established system of narrative, Brown casts doubt upon the linear nature of time. The strange synchronicity of the Brown’s past and future suggests W.G. Sebald’s speculation “that time will not pass away, has not passed away, that I can turn back and go behind it, and there I shall find…that all moments of time have co-existed simultaneously.”[1] Time is like the pattern of arcing aces on the backs of these cards, a wash of moments converging, never ceasing.

Existing on the same abstract level of reality, the past and future speak to each other as contingent possibilities; although the past is gone, it is no more verifiable than the future that we so desperately seek to know. Only the present addresses us directly, impassively observing the viewer from behind screen-like shades. In spite of the cynical manifestation of a long-gone past and a hopeless future painted in her cards and spelled out in the rising of a polluted sea, Brown seems to leave room for hopeful indeterminacy. Maybe it all depends on how we play our hand. Maybe the past can begin again.