In MoMA PS1’s third floor hallway, Vito Acconci: Where Are We Now (Who Are We Anyway?), 1976 is unveiled in a clamor of voices. This survey of Acconci’s early film, performance, and poetry resounds with the artist’s whispers, roars, and mumbles. Visitors meander through the galleries, guided less by the presented narrative than by the assertive aura of the artist himself, caught like a constellation across the speakers, monitors, and projections that populate these galleries. 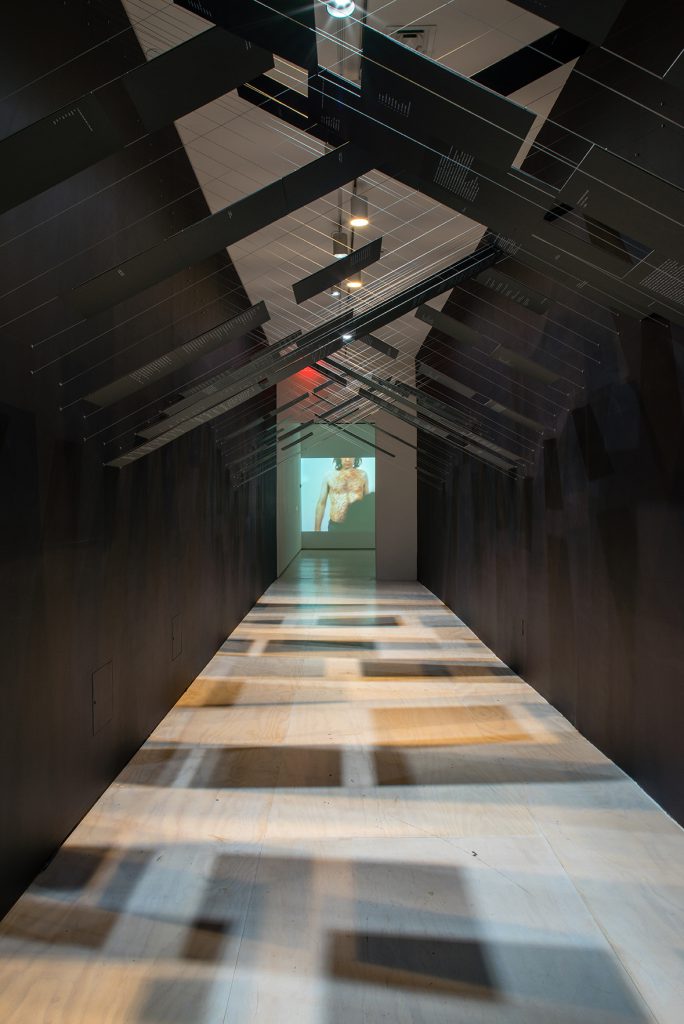 Lured by Acconci’s seductive tones, the viewer is drawn down a corridor overhung with tablets suspended to form a fragmented tunnel through the existing hall. Standing below this black-paneled canopy, the viewer glances up to realize that these plates are inscribed with the same lines echoing overhead. Acconci’s voice is clear in the recitation of poems that read as descriptions and commands, recalling the event scores of early 1960s fluxus but with a personal orientation. Playing on the indexical relationship of language with reality, poems such as I am moving at a normal rate (1969) and Now I will tell you a secret. I am nodding my head (1968) offer clear antecedents to the directives driving later film works.

At the end of this hall begins a series of galleries filled with film works from 1970 to 1973, suspended on the screened faces of wire columns or projected on the wall, washing the galleries in the glow of moving light. Every way you turn, he is there: Acconci’s bare belly, denuded of hair; Acconci chasing and punching his projected self; Acconci, Saturn-like with his mouth full of Kathy Dillon’s hair. Across these performances we watch the artist develop over time; he pursues some avenues doggedly even while introducing new interests and experiments. Of course, Following Piece (1969) and Seedbed (1972) are accounted for, but there is so much more to see. 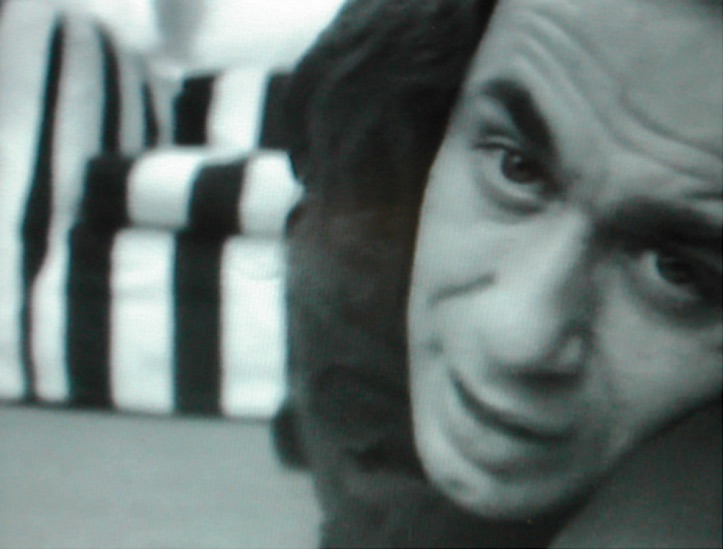 Acconci experiments with his own body as an object in Sounding Board (1971), as a sexual organism in Open Close (1970), and as the locus of violent desires in Claim Excerpts (1971). Pryings (1971) and Theme Song (1973) meditate upon the hierarchical and manipulative nature of relationships. In Watch (1971) and Centers (1971) Acconci offers himself as subject to our gaze, even while engaging our participation in the work. While these acts are often interesting for their social implications, the premise is always forefronted, the rules already set. This system is illuminated by a central room where Acconci’s personal archive of drawings, notations, and documentary photographs are displayed upon a group of metal structures designed by Vito and his wife, Maria Acconci, for this purpose. In his videos—that are often durational, sometimes painful and sexual, but that always explore the borderlands of convention and expectation—Acconci toes the lines between experiment, game, and art.

The exhibition culminates across the hall with three room-size works from 1976, the final year of Acconci’s artistic practice. Red Tapes, Under-History Lessons, and Where We Are Now (Who Are We Anyway?), the last of which is the exhibition’s namesake, are not only later in date but also feel more decided in form and overtly political in their engagement of social structures. 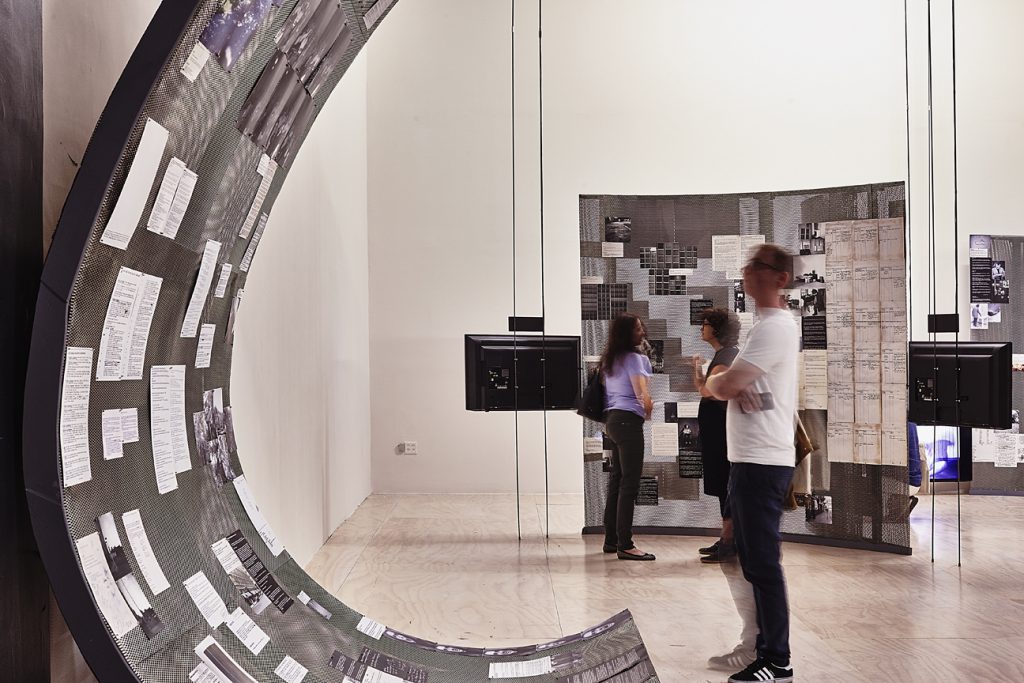 Installation view of VITO ACCONCI: WHERE WE ARE NOW (WHO ARE WE ANYWAY?), 1976 at MoMA PS1, 2016. Image courtesy of Acconci Studio and MoMA PS1. Photo by Pete Deevakul.

In the room dedicated to Under-History Lessons, a voice descends like an ungentle caress in waves of sound that raise the hair on the back of your neck. Acconci’s voice addresses the viewer from two speakers, lowered almost to ear-level, to entreat from both sides. Coaxing and direct, “Lesson 1: Let’s believe we’re in this together.” Then again, but in the enthusiastic pitches of a salesman, urging our faith in speech that is punctuated by exclamations. Under-History Lessons is a recording the feels as though it has emerged straight from Aldous Huxley’s Brave New World to demonstrate the ideological power of language. In unnatural enunciations—“again” pronounced “UH-gain” and “believe” stretched to “bee-leave”—Acconci presents us with words bastardized and destroyed, used without a knowledge or intent beyond ignorant affirmation. 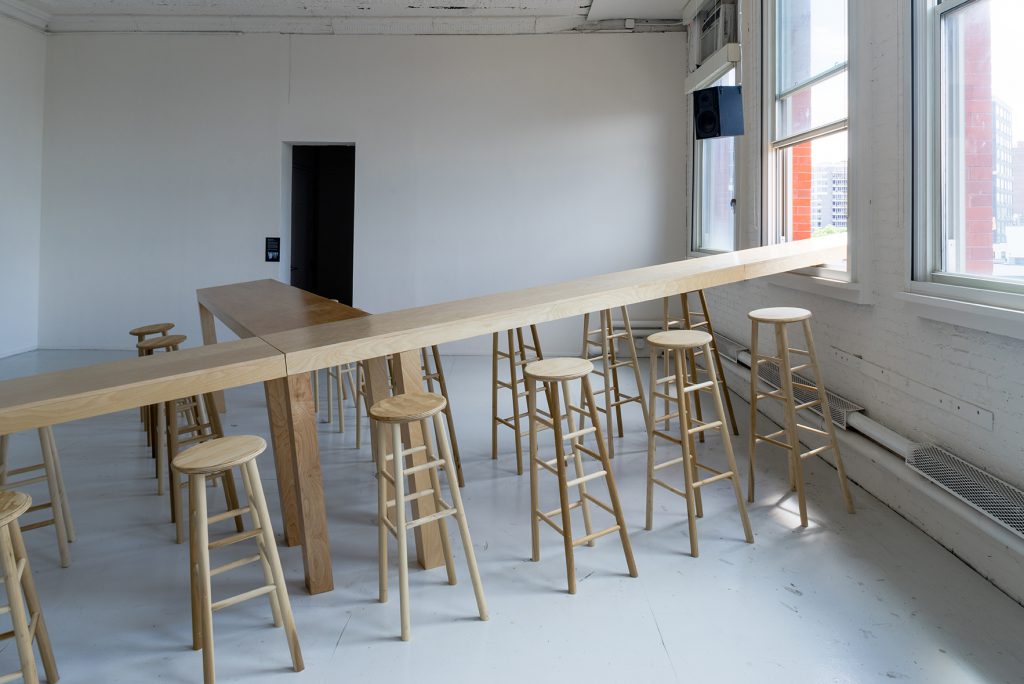 In an adjacent room, Where We Are Now (Who Are We Anyway?) (1976/2016) comprises lines of stools arranged after the fashion of either a funereal procession or a board meeting around a T-shaped table that extends a long arm out the open third-story window. Sliced so as to angle upwards towards the ajar window, one end of the table just low enough to step on, these chairs and their narrow centerpiece pull the viewer along their length to the perilous liberty that awaits outside. Just in front of the window, dictating from the head of the table, a speaker stuffily calls this empty meeting to order, but is repeatedly interrupted by a sly, solicitous, “And what do you think, Harold?” With every iteration the name of the addressed changes and you wait with trepidation, sure that soon you will also be called on, questioned. Perhaps your time, too, will come to walk the plank.

Sensually enveloping, Where We Are Now (Who Are We Anyway?) welcomes us into a monochrome space with a polarizing black-and-white that is nothing like the uncertain gray hues of the human psyche. These early works constitute an investigation, but one that is also personal in its cold scrutiny of a single subject: Acconci, face and body intimately unveiled across countless monitors and projections. These works are by Acconci and may contain him, but they are not necessarily limited to him. Surrounded by this cacophony of a single voice, we watch as the structures that regulate our society, our bodies, our minds are upended in Acconci’s probing videos. The collection exhibited at MoMA PS1 engages the particularities of the works, even while fundamentally altering the conditions of their presentation. None can truly be experienced in isolation; even as your eyes track Acconci’s wavering finger in Centers (1971), Acconci can be heard crooning from Theme Song in the next room; Acconci’s voice reading his 1960s poetry is present in your experience of The Red Tapes across the hall. However, even as this presentation in some ways limits the power of individual videos, the immersive space becomes the realization of a new and greater master work, one that is completed by Acconci Studio’s careful design of installation elements, such as the floating hall of poetry or the metal arabesques that house archival materials of performances. In an exhibition that captures Acconci as both explorative and experienced, we are given a double portrait of the artist as a man both young and old. 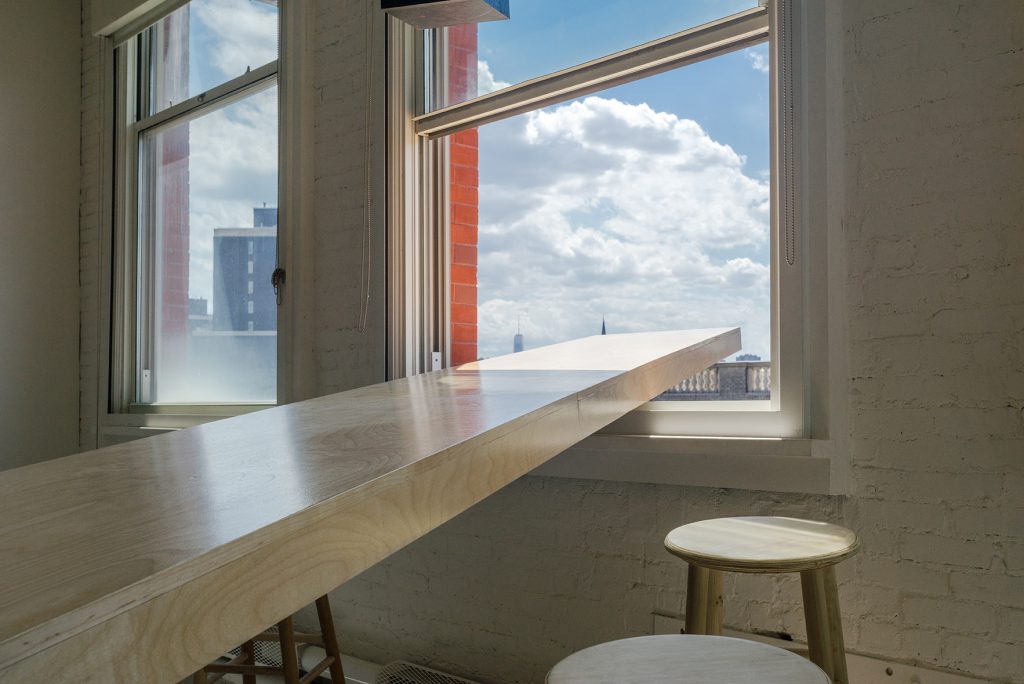 Next post Ed Ruscha: In Conversation With Andrew McClintock