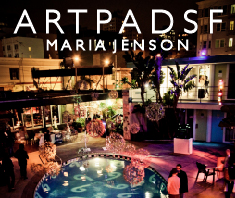 “ArtPadSF Makes a Splash at the Phoenix Hotel”

In the afterglow of “art fair fever,” we touched base with Maria Jenson, Director of ArtPadSF, to get a sense of the buzz around the Bay Area art scene, how SF stacks up to the competition and what it’s like to throw a giant, hotel pool party.

ArtPadSF was undoubtedly successful this year. What were the specific goals of the fair? Can you estimate how many visitors came through?

We had over 9,000 visitors to ArtPadSF and for our first year, we are quite pleased with this figure. We launched ArtPadSF at the Phoenix Hotel out of the need for an independent art fair to further engage and create new audiences for Bay Area emerging and contemporary galleries and artists. One of our main goals was to energize and promote San Francisco’s unique geographic, economic and historical presence as a vibrant and viable art center.  The landscape of the Bay is well seeded with artist’s studios, galleries and art schools of tremendous significance. ArtPad aims to help cultivate capital investment in local art.

How did the collaboration between Joie de Vivre Hotels and ArtPadSF take place?

While in the process of packing up to move from Venice, CA, where I ran an underground gallery called Salon Oblique, I stumbled upon Chip Conley’s (Producer, ArtPadSF) inspirational books on entrepreneurship. I read them all. These empowering ideas helped me to transition to the Bay Area’s very creative and community driven way of doing business. The ideas found in Chip’s books helped me to formulate a proposal for an independent art fair (then unnamed) that would take place at one of his properties, namely the Phoenix. Eventually, we arranged an introduction and a meeting where I discovered that the Phoenix was already the site of an art fair in the 90’s. That was a magical moment that set the tone for the collaboration that was to become ArtPadSF. Chip’s venturous spirit was the essential ingredient for moving forward. Between his hotel chain, Joie de Vivre, and our individual networks we found an outpouring of support.

After many years of attending art openings, events and art fairs all over the planet, I became keenly intrigued by how people interact around art.  The key ingredient was showcasing emerging artists in an intimate, welcoming and lively setting. As a produced writer and director of theater, I have a strong theatrical background. Because the art world is quite theatrical, this experience has come in handy in many ways. The best art events melt barriers, blur the lines, and fuse together people from diverse backgrounds. For ArtPadSF I set out to create a lively and hip marketplace that would encourage the exploration of emerging galleries and artists. The Bay Area has a liberal social structure that is conducive to the collaborative spirit of ArtPad. Despite the challenges of sacrificing sleep and the inevitable skepticism from critics, the focus became about the art, setting the stage and inviting people to come, freely experience and enjoy it.

Can you talk about the importance of an art fair for San Francisco at this time?

The SF art scene needs art fairs and especially right now as we’re heading out of the art market recession in intense spurts recognized by recent sales at auction and at Art Basel. SF is back on the map as a major art destination. Art fairs have a way of focusing global attention on a city and generating tremendous civic, economic activity that is shared from the top art collectors to local taxi drivers. The economic reach into a community over a 5-day event is surprising.

San Francisco, as a city, has as much significance as Los Angeles and certainly, Miami. This is a world-class art destination with dozens of top galleries and artists living here. There still remains a need to get the attention of the New York, European and Asian collectors and art fairs provide that opportunity. The art fairs also provide the chance to develop the next generation of art collectors. With headquarters like Twitter moving into the city, there is an opportunity to court the young, savvy tech darlings who have the economic power to become supporters of local emerging artists.

How has your experience at other major fairs like Art Basel in Miami influenced the work you do in San Francisco?

I was the regional director of a small independent art fair that took place at Art Basel Miami Beach December 2010. It was an eye-opening experience – in ways good and not so. Prior to this I was a casual participant during ABMB. I enjoyed an aspect of the chaos, feeling the crush of the art world, the traffic jams, and the strong need to be at all those key events. Let’s face it. Nothing beats this kind of feeling for a few days out of the year. The city turned into one big treasure hunt mostly centered on art. And fortunately for attendees of Art Basel Miami Beach the fairs were also fully supported by the city. There existed an abundance of maps and shuttles. All the hotels were in on the fun, too. If this could happen in Miami, why not in SF? This is a city built on civic pride. Sure, the only thing missing is the beach and warmer temps but luckily for ArtPadSF, we have the Phoenix and the pool, so we’re close.

How is the scene in San Francisco accepting (or in opposition) to a major art fair?

When I moved to the Bay two years ago I immediately pounded the pavement to survey local galleries to get a sense if launching an independent fair was feasible. I was met with equal parts enthusiasm and equal parts “it won’t happen here”. Both were motivating. I am hoping that the “it won’t happen here” folks have softened a bit after seeing what can be. It’s not necessarily a lot of fun to launch an art fair. It’s a ton of work. But, we have a vested interest in turning “it won’t” into “it can” and “it should”.

With two other major fairs happening the same weekend, how did ArtPad distinguish itself from the other fairs and how was it a collaboration with them?

ArtPad is located in a great venue, the Phoenix Hotel, an exciting and sexy motel, in an edgy neighborhood, the Tenderloin.  Add to this our aesthetic of seeking out what’s new, hot, unique and challenging in terms of galleries and art, and we’ve got our niche. I think all the fairs realized that we were creating a scene, engaging the city in a theatrical way (especially with our involvement with the Black Rock Arts Foundation*). Aficionados got a lot of face time with artworks over a few days while socializing with like-minded and not so like-minded folks. Each fair had a distinct personality, and from what I hear people enjoyed checking all of them out. The fairs were a civic success.  Add a shuttle bus and some reciprocal admissions and it starts to feel like a citywide party. Good for all. And of course because we had a pool, so we made a splash.

ArtPadSF will officially return in 2012, but what’s in store for the sequel is yet to be determined.