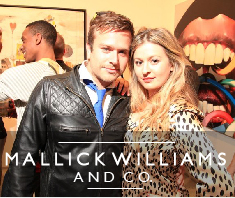 “The art world can be so serious at times.  We take our work seriously, but we also really want to inject a sense of fun into the equation.”

In the midst of the country’s Debt-pocalypse, it’s hard to imagine how opening a new gallery in the costly Chelsea neighborhood of NYC could feel like an optimistic business move.  I recently spoke with Zak Williams, owner and one half of the successful husband-and-wife duo that runs Mallick Williams & Co., one of Chelsea’s newest spots for showcasing emerging artists.  The key to success, according to Williams, is pretty straightforward.  “We have a great relationship with the artists we represent, and we try to support them the best we can.”

Mallick Williams & Co. represent a roster of young, contemporary artists like Erik Foss, Faust, Nicholas Forker, Kate Pane and Skullphone who come from a wide range of artistic beginnings, from sculpture to street art.  Located on the ground floor beneath forty artist studios, the boutique gallery is well positioned to attract and locate new talent.  One of the priorities of the gallery, says Williams, is to create and foster a culture of community with its neighbors where artists are invited to come in, hang out and chat.  “Working with such creative people,  we have the opportunity here to showcase great work, and that’s the priority,” notes Williams.

Williams admits that it’s a difficult market, but for him, the gallery business felt like a natural fit.  Growing up, he was surrounded by a creative environment of artists and photographers due to his art collector parents (his father is actor Robin Williams).  He also started his career in the creative field of video game production.  “It’s my natural environment, where I feel most comfortable,” says Williams.  As for his wife, Alex, “She’s the brains behind the operation,” jokes Williams.  Her background and years of experience in finance strike the perfect balance for the pair’s business partnership.   Both graduates of NYU, the husband-and-wife gallery owners are both long time New York residents.  Interestingly, Zak’s move to NYC from San Francisco just two weeks before the events of 9/11 undoubtedly shaped his connection to New York.

On September 11, 2011, the tenth anniversary of the tragedy, the Erik Foss’s solo show, “Avarice” opens at Mallick Williams & Co. The show has significant meaning and personal connection to both Williams and Foss.  “9/11 punctuated my time in NYC.  The show is indicative of how these past ten years have affected Erik’s experience, and I can relate.  It’s a deeply personal show for both of us,” notes Williams.  Sure to be a very powerful show in person, Erik Foss’s “Avarice” is not to be missed.

With just ten shows and a little less than a year under its belt, the young gallerists of Mallick Williams & Co. are off to a great start.  To date, their openings have packed the house and sparked loads of buzz in the art community.  A handful of solo shows and wildly successful group shows like “Hueless” and “Spectrum” keep audiences coming back for more.  “We’re very happy with how things are going.  We’re new.  It’s a tough business but we love it,” says Williams.