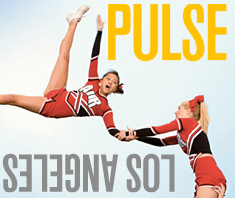 L.A. KEEPS ITS FINGER ON THE PULSE
–Meredith MacKenzie

The end of September marks an important weekend for contemporary art in Southern California. This month, Los Angeles will host a number of art happenings and events, proof that L.A. has emerged as a significant cultural contributor to the contemporary art scene. In the weeks leading up to the highly anticipated PULSE L.A. fair, we spoke with fair Director, Cornell DeWitt about the addition of Los Angeles as a new location in this set of prominent, fashionable fairs held annually in Miami and New York.

After major successes in Miami and New York, this is the first year that PULSE will take place in Los Angeles. Can you speak about the decision to include L.A. in the lineup?

It just really felt right. It’s not just a top-down decision, like we decided “we’re going to go do a fair in L.A.” or that even MMPI made the same decision and we decided to follow. It is a groundswell that is enormously California-based. That is critical. And now everyone else around the world seems be sitting up, taking notice, and wondering, “Wow, what in the world is going on in California? I better go check it out.” California is ready to prove itself, and the rest of the world is ready to check it out. We provide an invaluable tool for doing so.

For anyone living under a rock, who might not be familiar with PULSE, can you describe the PULSE fairs? What can we expect for L.A.?

Through its annual editions in New York, Los Angeles and Miami, PULSE provides a unique platform for diverse galleries to present a progressive blend of renowned and pioneering contemporary artists, alongside an evolving series of original programming. The fair’s distinctive commitment to the art community and visitor experience makes PULSE unique among art fairs and creates an art market experience that is both dynamic and inviting. We like to prove that it is possible to have a fair that is manageable in size and comprehensive in vision without reducing itself to some lowest common denominator – rather, it is made better by both of those things.

Is the aim to draw new or established collectors to Los Angeles this year?

In recent years, the existing L.A. art fairs have seemed to struggle to reach beyond the local L.A. audience. And as great as the L.A. art community is, any L.A. gallery will tell you that it is extremely difficult to support a gallery program, much less an entire fair, just on the local audience. So while a large part of PULSE’s strength is that we offer programming that is appealing to both new and established collectors, our larger goal with this fair is to leverage our worldwide reach to bring a much broader audience to Los Angeles, to thus give L.A. a real opportunity to show its chops.

Can you discuss the programming that will take place for the fair this year, including lectures, panels, screenings, etc? (PULSE Play, PULSE Profiles and PULSE Prize)

A critical part of each PULSE fair is our PULSE Projects series of installations and programming. It’s a tool that we use to connect in a more direct way with the local community where we present our fairs. In Los Angeles, we are focusing (although not exclusively) on works by California-based artists, such as a special commission by Martin Durazo, as well as installations by David Adey, Kiel Johnson, and Mineo Mizuno. Additionally, we provide exhibition space to a number of local non-profits, such as Artist Curated Projects, Las Cienegas Projects, Commonwealth and Council, LACE, and Human Resources, as well as to LA-based art journals Beautiful/Decay and Fabrik Magazine. Finally, our PULSE Play video programming is also L.A.-centric, with one program curated by ACP, and the other, curated by Brooklyn’s Dossier Journal and exhibitor Skylight Projects (New York), focuses on perceptions of L.A..

How has the contemporary art scene in Los Angeles evolved in recent years? How have fairs changed since the start of PULSE in 2006?

Los Angeles is really shaking off its second-city status in the American art market. Given the influence of artists that have come out of L.A. in the last 50 years (and particularly from the Pasadena scene of the the 1960s) and now a newer generation of younger artists, it follows that the art market would follow this prominence. I think that with the prominence of the film and music industries in Los Angeles, people have long been quick to dismiss or at least overlook the art community there. However, the increasing cross-overs between art and film and music certainly have played some part of this, the L.A. art community has just continued its steady growth over the years, and seems to have finally hit a real tipping point. It can hold attention to itself on its own.

How have art fairs changed is a totally different question. The fact is that art fairs exist to serve their primary clients, the galleries. The art market has grown exponentially over the last decade, driven by a broadly larger art-buying audience, and, more importantly, a more geographically-dispersed art-buying audience, driven by the internet. Art fairs provide an opportunity for gallerists to connect themselves and their artists directly with their clients, and have thus become a huge driving catalyst for galleries’ growth, representing a very large proportion of a gallery’s sales. Whether that business model for galleries is healthy or not is another question entirely, but for PULSE, our goal remains to make the fair experience as positive, enriching, and even fun as possible for our galleries, visitors and artists.

What about the significance of art fairs for the city of Los Angeles? How has this changed over time?

That’s an interesting question, because it begs the question: “Does a city’s art community need a major, international art fair to validate its status as an art world center?” But I think that is putting the cart before the horse. Two major, international-caliber art fairs are setting up shop in Los Angeles at the same time because the L.A. art community is ready for it. The L.A. art community has certainly skyrocketed to prominence recently. I feel that things such as Deitch’s move to MoCA, the Getty’s Pacific Standard Time, and the moves of several prominent galleries to L.A. are effects of this long rise in prominence, rather than causes of the immediate interest.

The opening weekend of PULSE coincides with other major art events: Pacific Standard Time, Art Platform and artLA. How does PULSE distinguish itself from the other fairs?

We all really have tried to work as collaboratively as possible, because we all recognize that for this to work, for L.A. to really step out of the shadows and distinguish itself on an international platform, we need to generate as much interest, excitement and buzz for art in L.A. as possible. Beyond that, PULSE is really playing its advantage from what it has learned from its prior fairs. We have an outstanding group of core exhibitors, to which we’ve added a lot of new ones for this fair specifically, and we’ve tried to capture some of the magic that we create in Miami at the fair here in L.A. We have a beautiful venue with great spaces indoors and out, that give us the opportunity to really stretch our legs with installations as well as visitor amenities. In Miami, people rave about our venue almost as much as they rave about the art; it is everyone’s favorite place to see art in Miami. We are recreating that incredible experience in L.A., and as such, it will truly stand out from the crowd.

How do you respond to critics who assert that the current economic condition has deterred art sales?

For starters, I wouldn’t disagree that the current economic climate has impacted art sales, but it’s been different at each level of the market. At the end of the day, the important thing is that artists continue to make work, and their gallerists continue to be passionate about sharing that work with as broad an audience as possible.

Graham Gillmore, I Am Living In The World, 2010 Hand-painted screen print with acrylic on Stonehenge paper 38 x 50 in Courtesy of fouladi projects, San Francisco