SFAQ NYC Correspondent Dean Dempsey sits down with artist Marilyn Minter for his bi-monthly column, Pretty Pictures, that invites the art world in a discussion of the culture and politics of our times.

Debased Glamour and the 1%

Marilyn Minter at her solo exhibition at Salon 94 Bowery in New York. Runs through December 4. Photo by Dean Dempsey.

I walked into office of Salon 94 Bowery and Marilyn Minter was watching Lawrence O’Donnell debate Rush Limbaugh on MSNBC.  She was dressed in all black with a polka-dot scarf.  “You must be Dean Dempsey.” She stood up and shook my hand.  “Are you Swedish?” she asked, and I have no idea why. “I wish!” I said.

A week earlier, I had first seen her solo exhibition in a drunken stupor after spending the afternoon on Coney Island.  When I entered the opening reception I initially encountered her video, Play Pen.  I was immediately locked into it, with or without the help of cheap Scotch.  Babies splashed in what looked and felt like liquid mercury, generating explosions that were both apocalyptic and celebratory, all as they smiled with an expression of indefinite happiness. It attained the sensible combination of both trash and glamour and captured the viewer the way a seasoned hooker sizes up their trick.  In short, I couldn’t look away.

Marilyn Minter, if you don’t know, is quite the big shot with international attention.  She’s exhibited at both the San Francisco and New York MoMA, Fotomuseum in Switzerland, La Conservera in Spain; and of course the 2006 Whitney Biennial here in New York City to name just the few.  She’s said before in a lecture at the Hammer Museum in Los Angeles that she was interested in notions of “debased glamour”.  I thought that was good place to begin.

Dean Dempsey:  What do you mean by that?

Marilyn Minter:  Well, I’m also interested in pornography.  Things considered debased, shallow, vapid –but that are really not.  It’s such an irony; there would be no internet without pornography. It’s easy to attack fashion and glamour because it’s superficial but it also gives people an enormous amount of pleasure.  It’s a bazillion dollar industry, and the way you look, the way I look, the way everybody looks is just telling what tribe you belong to, even if you don’t care at all about fashion or glamour, it’s making a statement.

DD:   I understand you don’t alter your photos while on the other hand you completely construct scenes for your paintings.  How does manipulation/fantasy play into your work?

MM:  I think perfect is the imperfection because it doesn’t exist.  It doesn’t even exist for that second the shutter clicks.  There is this robotic Photoshop ideal set by the magazines.  My main critique is that I work with superficiality.  And I think those standards are so stupid, stop denying your own culture.  I don’t have to seek out imperfections because they’re there.  I love these Photoshop fails the Jezebel blog shows all the time.  I remember looking at Vogue the other day and thought the picture was Kristen Dunst, and I thumbed through it and it was Reese Witherspoon!  I mean she was made unrecognizable.

DD:  You use primarily the female body, and most of your work shows paraphernalia’s of femininity, like stilettos and makeup for example.  As an influential woman still engaged with contemporary art, how does feminism inform your work?

MM:  I think everybody is a feminist these days.  It’s almost not chic, you know? To see an unreconstructed, non-feminist is like, what are they, living in the era dinosaurs?

The world is better off with women in more power; it’s much more civilized and less violent.  It’s been proven, there have been studies (really?).  It helps men too, it’s better for the whole world.

I didn’t want to bring up Margaret Thatcher, or Hillary Clinton’s vote for the Iraq war, or even more recent foolia’s like Sarah Palin or Michele Bachmann.  Maybe I just hate everybody, call me old fashioned.

DD:  What do you think about the Occupy Wall Street protests?

She chuckled and leaned across the table, reaching to pour another glass of Perrier bubbly water.

But you know I must have been on 20 marches in my life, from civil rights to shutting down the pentagon.  I figured it’s your generation.  I was already down there, I was on one march.  I think it’s the best thing that’s happened.

I was so paralyzed, I couldn’t even read the news watching Eric Cantor and the Tea Party blocking everything Barack Obama did, and then I listen to these candidates use catch-phrases like “job creators” – “we can’t touch the job creators” and I just want to puke.  I think Occupy Wall Street is just what I needed to hear.  I want to see it get bigger and bigger and stay nonviolent because it’s really about Congress not paying any attention to the population of the United States. The inequities are so clear, the rich are getting richer and the poor are getting poorer.  And I’m brand-new rich!

I found her honesty about having money endearing, I loved it.  She makes it funny.

DD:  You’ve mentioned the words peripheries and boundaries in reference to your practice, how do you want people to encounter your work?

MM:  Well I want to keep my narratives multi-layered; I’m trying to always have different readings.  I don’t want to tell people what to think.  I try to make work about the times we live in and I want you to come in and have your own experiences, histories, traditions and have your own dialog with it. But it does always hold two opposite contradictory view points.  I’m interested in that paradox because I don’t see anything in black and white.

DD: Your work seems to use babies quite a bit, what do they symbolize to you?

MM:  Metaphorical innocence.  For me it’s become a condition without being altered.  Yet, when does it start, the desire machine?

DD:  I read you used to paint with lipstick and makeup, any plans to go back to that as a medium?

MM: I’ve never used that.  I’ve always painted with oil or enamel.   People write the craziest shit.  Somebody once wrote I painted with my tongue and lips.  I think it was a translation problem because that’s how she read it, it was another country. And it was printed in the catalog!

DD:  One of your most famous pieces, Green Pink Caviar, seems to have a dynamic balance between beauty and grotesque, what do you think of that assessment?

MM: It never looks grotesque to me, though.  I don’t mean to sound disingenuous, but I’m always surprised when people find things disgusting.  I know that I must be off somehow.  I mean people were gagging watching Green Pink Caviar.  It stuns me.  It’s all candy.  I’m ultimately at the mercy of the elements.  I throw everything together and don’t know what’s going to happen.

MM: I read all the time, I’m a veracious reader.  I liked Jennifer Egan’s “A Visit from the Goon Squad”.  I watched Bellflower recently, it’s some indy movie, I really enjoyed it.

DD:  Anything else in the news stand out to you?

MM: I’m absolutely riveted by the campaigns and Occupy Wall Street.  That’s what we were watching, Lawrence O’Donnell take apart Rush Limbaugh when you came in.  I feel like Occupy Wall Street is a breath of fresh air.  Nobody pointed out that these guys didn’t go to jail and just made more money.  I wish everybody would take their money out of banks and put in the mattress again.

Yet hedge fund people are my collectors.  It’s a hard paradox.  These are left wing people but they happen to have hedge funds.  Maybe we are the enemy…but I think fundamentalism is ruining the world.  People who are afraid to think for themselves.

DD:  Thanks for taking the time Marilyn, I really do enjoy the show.

MM:  Thank you Dean Dempsey, what a great name.  How tall are you?

She seemed filled with paradox and I’m glad she acknowledged it, however on the surface.  And at the end of it all when she gave me her email and address, I just wanted an invitation to a fancy dinner at her home, with guests from all over the world discussing art and politics.  I love dinner at people’s houses, especially when they are wealthy and creative, without worry, and never let a wine glass go empty.  They would be alien yet intimate, embodying success but also humility.  Everything would conjure memories of the past, yet everyone would have certain plans for tomorrow.    I asked Marilyn what was next.  She responded without hesitation, as though looking at her diary; “More babies”.

Dean Dempsey is a visual artist based in New York City. 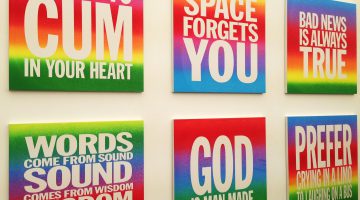