Mark Benson at Ever Gold Gallery

When Mark Benson told me about his show that opens at Ever Gold Gallery tomorrow night I thought he had gone off the deep end of MFA mania (a disease that we should all look into curing)…but I think that’s just because I hate flu shots. Actually I was quite blown away by the concepts behind Marks show and after getting a little sneak peak yesterday with all the heaters and air conditioners turned on full blast along side paintings made from IcyHot, Robitussin, NyQuil and DayQuil I couldn’t help but think that Mark Benson is a mad genius. Regardless if you agree with the ever on going debated about the flu shot you should go to this opening but if you like getting flu shots this is your place to do it this season – it’s an edtioned shot that comes with a corresponding certificate for only $50! It makes me think of non other than Yves Klein’s “La spécialisation de la sensibilité à l’état matière première en sensibilité picturale stabilisée, Le Vide(The Specialization of Sensibility in the Raw Material State into Stabilized Pictorial Sensibility, The Void)” where as part of the 1958 exhibition Mr. Klein served blue martins (after his International Klein Blue (IKB)). But this time you keep the art in your veins for a few months. Also makes me think of a piece that Paul Kos did in 1969, “Kinetic Capsules” where originally the piece was supposed to have metal ball bearings in them but the health department came down on Paul because the balls could get stuck in peoples digestive track – but the idea was when the ball bearing dropped in the toilet and made a “plunk” the piece was over. There is no “plunk” or no blue pee that you can get from Mark Bensons flu shot – but you can be miserable or healthy this winter from it. So I will now refer to Benson as a post post post neo conceptualist…so deal with it. I hear they have cheep beer at Ever Gold too. 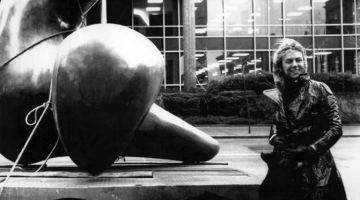