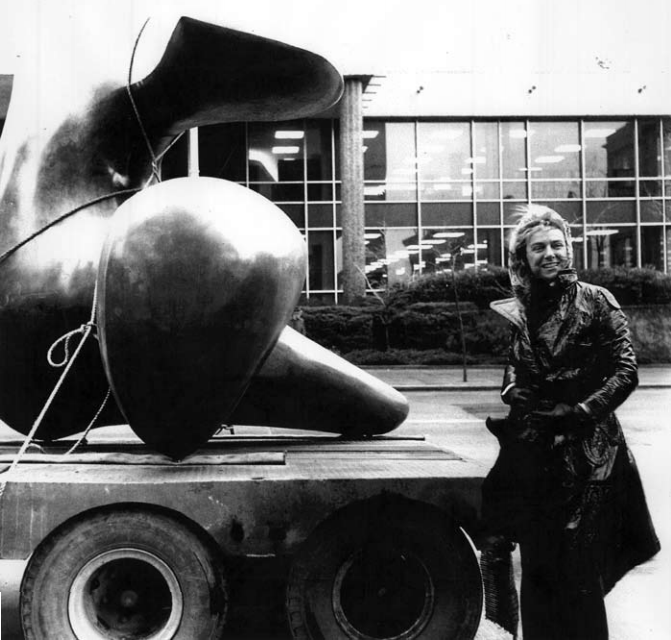 Paule Anglim, at an installation with a Henry Moore sculpture.

San Francisco gallery owner Paule Anglim passed away on April 2, 2015. She preferred to have her birthdate remain a mystery. She was the indomitable grande dame of the The City’s art scene, who championed generations of San Francisco’s artists, especially those of a conceptual bent, for nearly fifty years. She was an early supporter of San Francisco Arts Quarterly, and despite her departure, she remains an inspiration to those of us who believe that art can enhance our all too human condition.

Previous published in issue 5 of SFAQ.

Trying to find biographical information on Paule Anglim is like looking for a needle in a haystack. If you Google “Paule Anglim” and the word “interview,” you come up with over six thousand entries. She gets lost among her stable of artists ranging over fifty years of San Francisco cultural history, from the Beats to Bay Area Conceptualism, from Bruce Conner to Enrique Chagoya.

Fortunately, wading through the maze of digital information, I found a recent 2009 interview with Paule and gallery manager Ed Gilbert conducted by author and master oral historian Richard Cándida Smith, author of the masterwork Utopia and Dissent: Art, Poetry and Politics in California (University of California Press, 1995), providing an excellent introduction to the many phases of Paule’s career.

Paule came to San Francisco from Québec, Canada in the fifties. Arriving with several degrees and intending to become a social worker, Paule began an art consultation business focusing on public sculpture, and in particular the placement of large-scale works by noted international artists Alexander Calder, Henry Moore, and Isamu Noguchi, in such cities as Chicago, Houston, Los Angeles, and Fresno, in which she placed work by Calder and Peter Voulkos.

In this, Paule was a pioneer, staging exhibitions linking architects with sculptors, and initiating the concept of corporate responsibility with the introduction of sculpture and painting interacting with the building itself. For an exhibition at the Department of Architecture, University of California, Berkeley, she wrote, “Today, the architect, in addition to searching for new forms of structural expressions, is also newly conscious of the arts as a creative partner in the design of a building complex.”

In the early seventies, Paule met Louise Bourgeois in Paris, showed her first in 1987, and continued the relationship until the artist’s death at 98 years old, occurring during the run of her exhibition Mother and Child at the gallery in May 2010. “It is difficult to put into words,” Anglim wrote, “impossible, I think, to sum up what Louise’s work has meant to me professionally and personally. I cannot overstate the honor it gives me to provide a place so that others can come and experience her work, to be as astonished and enthralled as I am by this genius of the art world.”

Paule interviewed Gabrielle Buffet-Picabia, then in her nineties, in 1976. In a wide-ranging two-day interview conducted in Paris, Paule questioned her on some of the most intriguing moments of modernism, including a vacation trip taken with husband Francis Picabia, Marcel Duchamp, and Guillaume Apollinaire to the Jura Mountains, the Picabia’s attendance at the 1913 Armory Show, and Buffet-Picabia’s friendships with Alfred Stieglitz, Alexander Calder, Edgar Varése, and Samuel Beckett.

This interest in modernism’s roots and friendships with women actively participating in the cultural history of their era served Paule well as seeker of inspirational role models.

Paule opened a gallery on Montgomery Street in the mid-‘70s, followed by her present space at the bottom of Geary in 1982. Her first shows were with Hassel Smith, Milton Avery, and Alice Neel. Friends had suggested she open a gallery, and with her experience curating sculptural themed shows, such as a 1968 exhibition contrasting contemporary sculpture and paintings with primitive art and antiques as part of her art advisory program, she decided, “I just wanted to own a gallery, so I opened the gallery.”

Some two blocks away from the San Francisco Museum of Art, she may be forgiven to have favored this particular institution over the years. This was furthered through a friendship with SFMOMA curator John Caldwell, the museum’s first curator of painting and sculpture from 1988 to 1993, who made a major purchase of a David Ireland work, A Decade Document, Withcomet, Andcomet, Andstool, 1980–1990, in 1991.

Ireland’s work was the earliest conceptual work sold by the gallery to a museum. She had built a base for this by establishing a series of shows under the rubric, “Solid Concept,” bringing Bay Area Conceptualist artists David Ireland, Terry Fox, Tom Marioni, Howard Fried, Tony Labat, and others to local, national, and international attention.

In addition to building a public for conceptual, performance, and installation artists, Paule has also been supportive of the local poetry scene, with prior gallery readings by Robert Duncan, Michael Palmer, Michael McClure, and others.

By incorporating media artists Paul Kos, Howard Fried, and Nayland Blake into her program, Paule helped introduce fine art media installation within a commercial gallery context. Her support of video installation continues with her commitment to Bull. Miletic (Synne Bull and Dragan Miletic), a collaboration between married San Francisco Art Institute grads from Serbia and Norway, whose most GPA exhibition was reviewed by local writer Glen Helfand in the March 2011 Artforum.

Another focus of gallery attention is directed toward Beat Generation artists including Joan Brown, Jess and but most notably Bruce Conner. Group exhibitions have featured many of the West Coast Beats including Wallace Berman and George Herms. 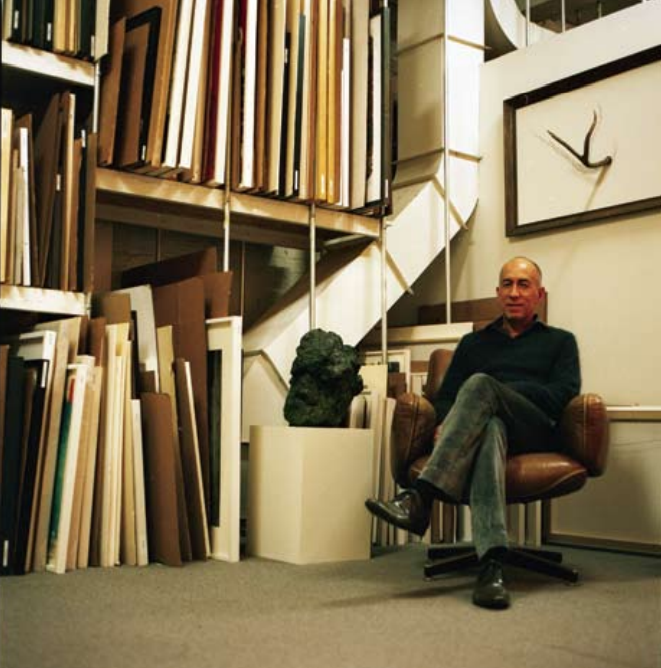 Paule Anglim, at an installation with a Henry Moore sculpture.

Paule’s placement of works over the years, solely to the San Francisco Museum of Modern Art, reflect the breadth of her commitment to Bay Area and California artists. There was an early sale of a Robert Bechtle painting, presaging his retrospective of 2005. Director David Ross acquired a Terry Fox work. Bruce Conner is represented by many phases of his career, from assemblage to inkblot drawings. Her support of the politically charged Enrique Chagoya led to SFMOMA’s acquisition of Tales from the Conquest/Codex (1992).

How she maintains a relationship with so many diverse artists is a bit of a mystery. Anglim and Gilbert choose their artists by looking “for some kind of unique poetry in the artist’s work. They’re usually dissimilar.” Paule credits a large part of the gallery’s success to Ed Gilbert, her longtime gallery manager, who engages many of the younger artists entering the gallery’s roster.

Once selected, gallery artists receive full court press. Each artist they represent is shown, give or take, every two years. Not an easy matter with some twenty artists to keep happy. Two separate exhibition venues within the gallery help expedite this.

Paule publicizes her artists through print media, most notably Artforum. “[T]hey’re seen internationally, especially in Artforum . . . an article in a publication is quite valuable.” Her exhibition advertisements within these periodicals help situate the gallery within the dialogue of contemporary art practice and showcase her artists who benefit through their association with the gallery.

This steady stream of gallery advertising in major American art magazines, which include color reproductions of her artists’ works, benefits not only the gallery and the artist, but the entire California and Bay Area arts community, which ride their coattails through the steady exposure of locally established and emerging artists to an expanded audience.

Selection by the gallery insures careful consideration of the artist’s voice amidst the clatter of contemporary cultural conversation. Their association with Gallery Paule Anglim guarantees her artists’ fair hearing both here and abroad, situating them within a context that critics, curators, scholars, and civilians can appreciate and understand.

In the Cándida Smith interview, Paule mentions a list of year-end gifts she makes to cultural institutions as a service to her artists. Her greatest gift, year in year out, is Paule herself.

Let a poet end it better than I. In correspondence shortly before his death, after having seen a 1996 newspaper clipping on Paule, San Francisco Renaissance poet and filmmaker James Broughton wrote,

“Loved reading about you in the paper, though I didn’t think they made you sound special enough, nor glamorous enough either! I already know about your generosities . . . Stay wonderful and resourceful and discerning, and remember how much I love you when you have nothing better to think about on your artful journeys.” 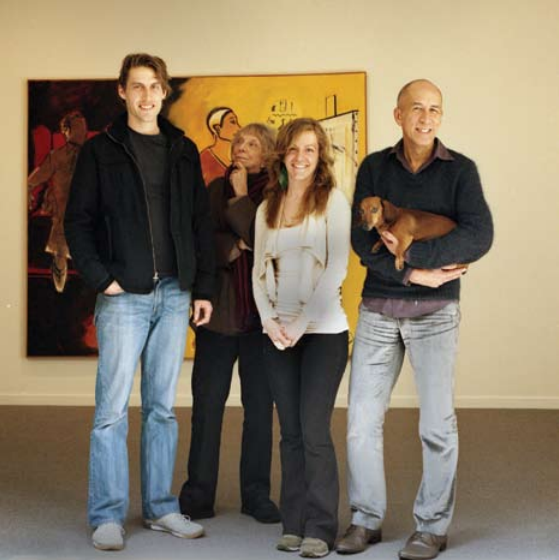 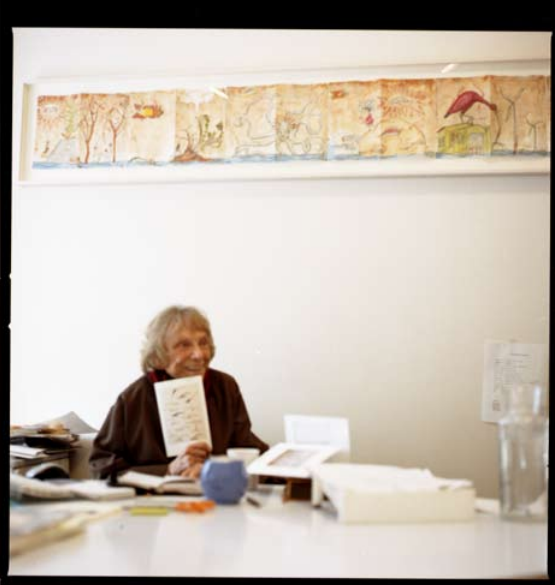 Paule Anglim in her office, photographed by Andrew McClintock.

Next post Lee Mingwei: Life, Memories, And The Art Of Participation 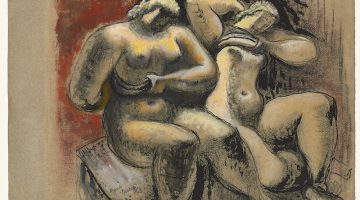